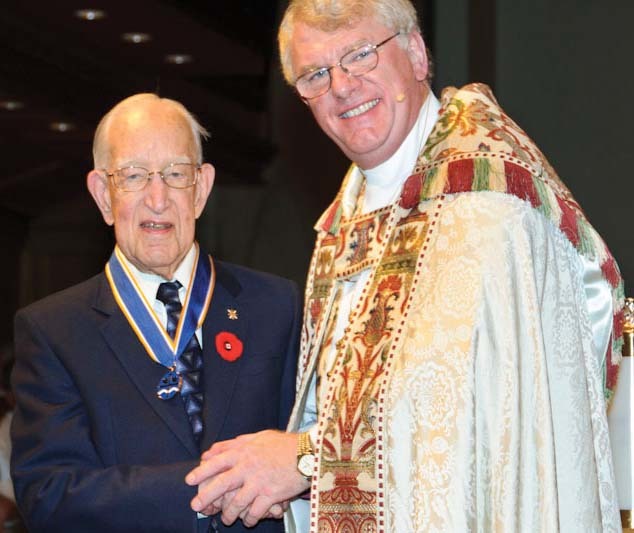 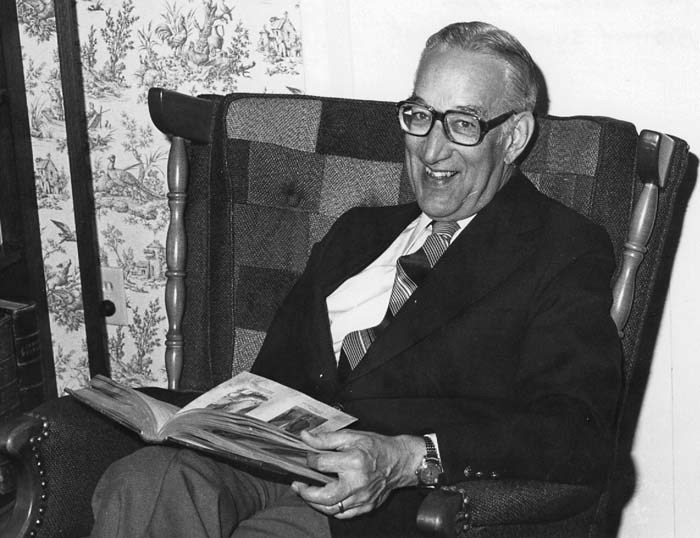 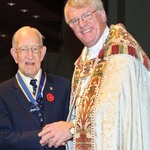 It is with great sadness that we mourn the death of Garth Walker. Garth founded the archives of the Diocese of New Westminster in 1980 after retiring from his “first career” in insurance. A WWII veteran, Garth used his superior organizational skills and love of all things historical to create a solid foundation for the Diocesan Archives until his retirement from the position in 1986. He continued to volunteer in the archives – managing the clergy database – well into his 95th year and only quit volunteering once his driver’s license was not renewed!
In 1998, Garth was the first recipient from the Diocese of New Westminster of the Anglican Award of Merit. This award is conferred on lay people who have made an outstanding contribution to the church. At the time of the award, Garth was the chair of the archives committee of General Synod.
November 7th, 2010, Garth received the Order of the Diocese of New Westminster to mark his outstanding contribution to the church through his work as an archivist.
At the funeral service for Garth Walker, the words "good and faithful servant" are sure to be spoken, for Garth, in his modest, unassuming manner, has served well the diocese (and the province and the national church) for more than seven decades.
My closest working relationship with him was in the recording of a series of interviews with retired senior clerics, among them
Archbishops Godfrey Gower, David Somerville and Douglas Hambidge.
These were rewarding and revealing interviews, as there was no time limit--some went on for close to four hours--and, because the interviewees were retired, and the material was not intended for public broadcast, they felt unconstrained, and spoke freely and candidly.
Garth organized the interviews, securing the permission of the interviewees and establishing times and locations and ground rules.
Recording engineer Stuart Tarbuck and I would turn up as required, microphone and hours of tape at the ready. When completed and edited, the tapes were sent to both diocesan and national archives, to be made available as research material for scholars and writers.
It's unfortunate that Garth himself was not included among those interviewed. He was born in 1914, the year of the first meeting of the Provincial Synod of British Columbia, and over his ninety-eight years he would watch the movement of the Diocese of New Westminster under bishops from Adam de Pencier to Francis Heathcote, Godfrey Gower to David Somerville, Douglas Hambidge to Michael Ingham.
There have been many strong lay persons in this diocese. Garth Walker was in the front line. It is good to remember him. – Lyndon Grove, September 25th, 2012.

Garth is survived by his wife of over 70 years, Florence, children, Barbara, Douglas, Murray, grandchildren, Tanis, Sean, Kymm, Kendra and great-grandchildren, Micah, Liam, Bethany, Noah, Keira and Isabel.
Garth will be remembered for his quiet determination, his great sense of humour and superbly kind heart. A Celebration of his life is scheduled for 2pm, Friday, October 5th at  St. Mary’s, Kerrisdale.


Rest eternal grant to him, o Lord, and let light perpetual shine upon him.
Images: Top and Homepage, Garth Walker in 1980 PHOTO: Ronald Harrison. Below, Garth is congratulated by Bishop Michael after receiving the Order of the Diocese of New Westminster, November 7th, 2010, PHOTO: Wayne Chose