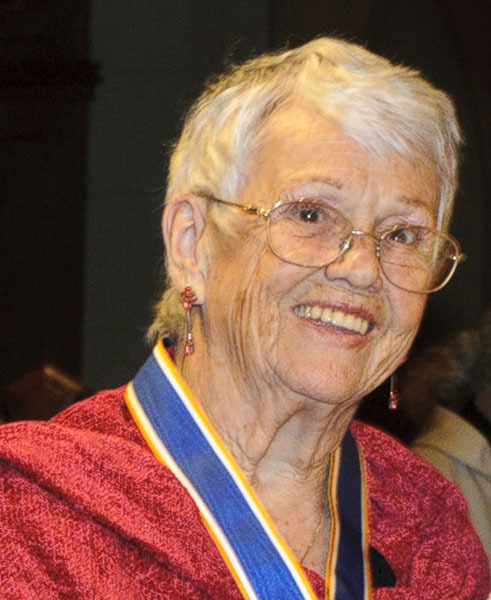 Shirley Cook was born in Victoria, BC. She was small in stature but huge in personality and determination.

She worked for a Victoria Radio Station and much later as a personnel secretary at Woodwards in Mayfair and Guildford. She was president of the Parent Teacher’s Association in both Victoria and Guildford.

Life was not always smooth for Shirley, but she never allowed that to stand in her way or prevent her faith from coming to the fore. She lived her life in dedication to God, her family and friends, and the Church.

Shirley was one of the founding members of the Church of the Epiphany and actually was one of the parishioners who formed working parties every Saturday to build the church in 1970.

Shirley was at all services and events, was a long-time member of the Altar Guild, a driver for Sunday School events. She was a mentor to a Journey to Adult young person, writing letters to each other over a period of weeks. She was passionate about all aspects of church life and never shy to express and speak about her faith.

On Sunday, November 7, 2010, Shirley was invested into the Order of the Diocese of New Westminster as the ‘Epiphany’ parish nominee. Here is the Citation:

Shirley has been and is a leader in the parish and the community. She has been a major supporter of families facing ALS. Even 14 years after her husband succumbed to ALS she continues to provide significant support for families facing this terrible disease.

Shirley was part of a large family who loved her and for whom she always found time. She was one of those people who had boundless energy and walked several kilometers a day into her 80’s.

Her second husband, Art, suffered from ALS. As is described in the ODNW citation Shirley became a passionate and enthusiastic advocate. She was secretary for that organization out of the Vancouver office, which included organizing a sponsored annual golf tournament; hosting a local group through the Church of the Epiphany; and speaking to various groups about the disease that took Art’s life.

As a long-time member of the Bible Study group, it was Shirley who suggested the group meet in her residence at Fleetwood Villa. Residents and non-residents came together weekly, with Shirley handing out the sheet to residents in advance. With COVID Bible Study on Zoom, and each and every Sunday service,  Shirley attended the Epiphany service by phone.

The last few weeks of her life, Shirley’s health deteriorated but she knew her life was coming to a close and she was ready to go. We do not learn our faith from others but people point the way and Shirley certainly made very clear where the path led, to God, to Jesus Christ, her Saviour and ours.

Shirley leaves behind a large family, and a son, the Reverend Ted Eden, a retired Anglican priest.