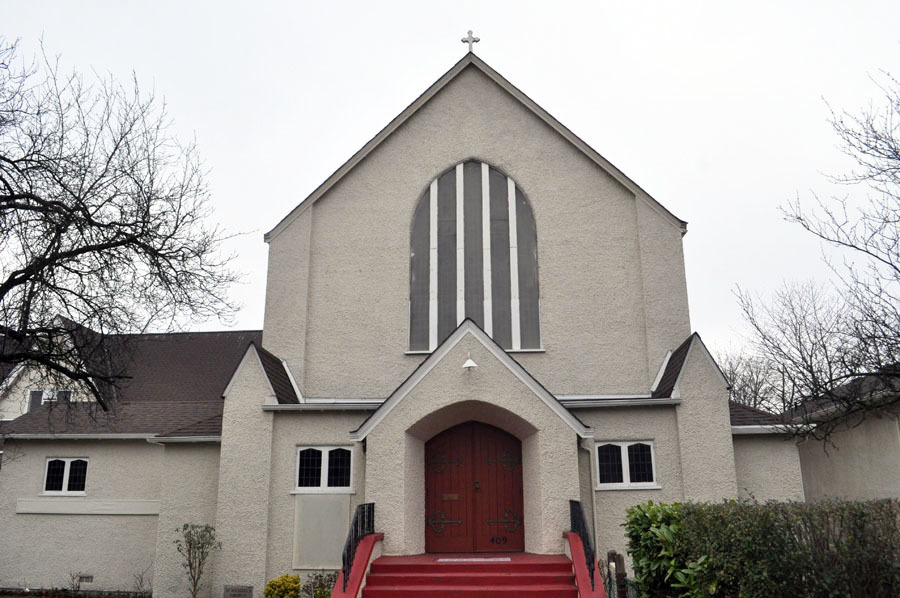 A post on the diocesan website news pages, March 27, 2022 and also in the May 2022 issue of the diocesan print magazine, Topic, it was announced that the Diocesan Task Force on Homelessness & Housing Affordability began their work in Feb 2022. The Task Force was put together as the result of a resolution passed on May 15, 2021, the most recent Diocesan Synod.

A year previously, at the parish's Vestry Meeting held on February 7, 2021, St Michael’s Multicultural (SMM) on Broadway ratified Strat Plan 2028, with a core Smart Goal of initiating a redevelopment project, with a primary focus on providing affordable housing for Vancouver’s Mount Pleasant neigbourhood. In refinement since then, the parish team has come to understand that financial realities will likely lead to mixed affordable housing. The graphic below shows what the continuum/options of affordable housing looks like and anticipates that the ultimate business plan ‘mix’ will likely be on the right-hand side of the accompanying graphic. With the intention to work towards completion of our Business Plan/Case by February 2024, it is anticipated that the Diocesan Task Force (although with a limited timeline as they report back to Diocesan Synod in May of 2023) will add refinements and more granularity to this continuum to assist in our business case.

The seminal one-pager presented to the 2021 Vestry was co-written/approved by the Diocesan Redevelopment Team and SMM, after their initial Zoom meeting, December 17, 2020.  After the SMM leadership team met with then-chair Tom Rowe, the Reverend Tellison Glover, and the Reverend Paul Woehrle, the letter documented three conclusions:

1.  “We (diocesan leadership) would really recommend that you (SMM) consider redevelopment on a major basis.”

2.  “The (diocesan) Redevelopment Committee is here to support.”

3.  “SMM has the potential to be a keystone redevelopment in the diocese.”

The catalyst for setting up the initial meeting with the Diocesan Redevelopment Committee was the announcement by the City of Vancouver of the proposal to build the Broadway Corridor Skytrain extension, and have it in service by 2025. The graphic below shows the Broadway Skytrain extension, the ‘X’ shows SMM at the ‘bend’ of the line, within four blocks of, not one, but two different Skytrain stations.

With a full city block of Broadway frontage, it is easy to see how one of the Consulting firms that SMM have met with would characterize the site as a “Fantastic opportunity for Affordable Housing.” Part of that testimonial came from research they had done confirming that the City of Vancouver’s Broadway Plan rezoning initiative will likely allow at least a 20-storey development at 409 E Broadway.

In the 18 months since the initial meeting with Tom, Tellison, and Paul, SMM has concluded much of its fact finding/visioning work. It is now actively seeking a Concept Development Partner/Consultant, with a tentative objective of completing the Concept Development/Business Case phase by SMM’s 2024 Vestry. If things go according to plan, SMM should then be able to consider four next steps – finding a Development Partner, arranging financing, planning for when construction might begin, and arranging an alternate site for worship during the construction phase.

By way of giving the congregation a redevelopment sense of reality, we have taken to showing them the cornerstone of the current sanctuary, laid in 1932 (see accompanying picture). We use this photo suggest to the community that redevelopment could realistically be completed by the 100th anniversary of the laying of that stone. With a full city block of Broadway frontage, and our proximity to two future Skytrain stations, the consulting firms with whom we have engaged reinforce the three diocesan points at the beginning of this article, and that we should be able to come in well before 2032. Support from the Diocesan Redevelopment Committee has allowed SMM to move faster and with more assurance than we thought possible during our initial meeting in 2020.  This support continued as recently as May 10, when the Reverend Paul Woehrle provided the SMM Redevelopment Team with four Parish Development Guides. Based on 18 months of learnings, it is a guarantee that these four guides may substantively help and speed up the learning curve for other diocesan churches who choose to go down the path we have followed.

And, for diocesan churches choosing affordable housing as the primary focus of their redevelopment plans, it can be seen that the new Diocesan Task Force on Homelessness & Affordable Housing could have the same effect.

For diocesan churches considering redevelopment, a word of hope; if you have considered redevelopment in the past, and for whatever reason put it off, don’t be fearful of revisiting the idea. At SMM we’ve invested much of our leadership’s energies in exploring redevelopment over 5 months in 2005.  At that time, we eventually decided that the focus of the leadership should be on mission.  With hindsight we made the right decision, and, only now, after 17 years, do we feel we have all that we need to embark with confidence on a redevelopment project with the possibility of a new building on the 100th Anniversary of the current church.

Finally, returning to our genesis meeting December 17, 2020, , the Rev. Paul Woehrle provided us with   enduring inspiration when he concluded our discussions with a prayer that St Michael’s has since adopted as their Redevelopment Prayer:

that things which were cast down are being raised up,

and things which had grown old are being made new,

and that all things are being brought to their perfection

by him through whom all things are made.  Amen.

The Broadway Subway Project is a 5.7 km extension of the Millennium Line, from VCC-Clark Station to Broadway and Arbutus. It will provide fast, frequent and convenient SkyTrain service to B.C.’s second largest jobs centre, world-class health services, and emerging innovation and research hub, and growing residential communities.

The project is on schedule for the new line to open in 2025.