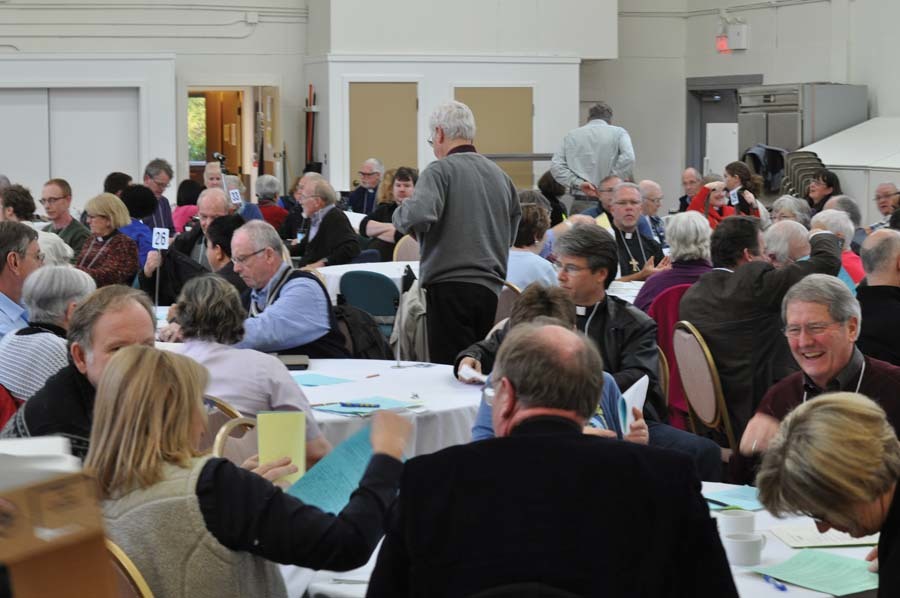 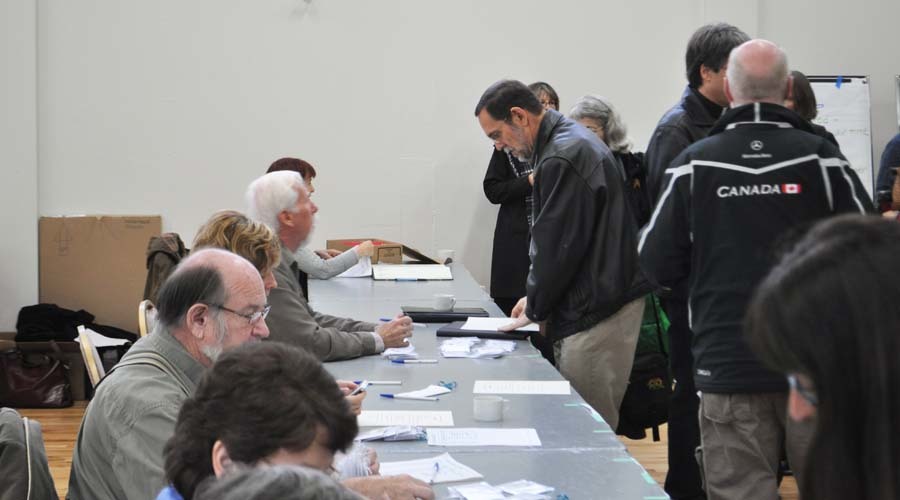 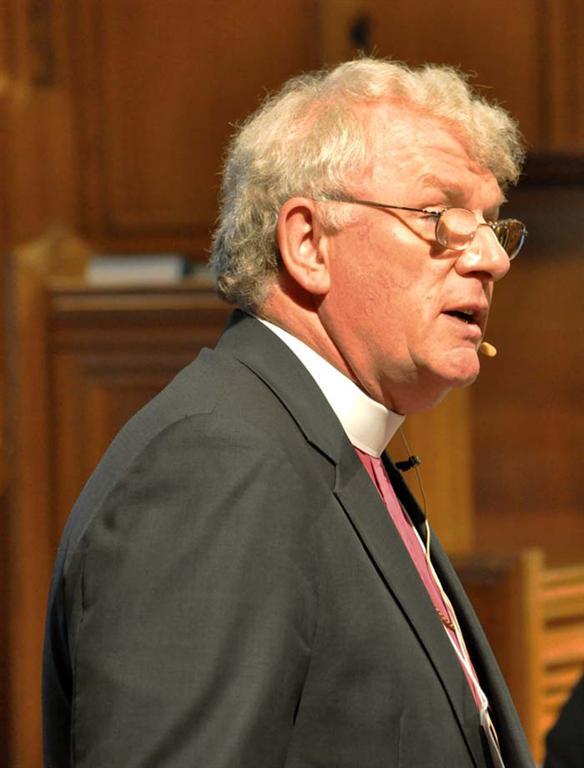 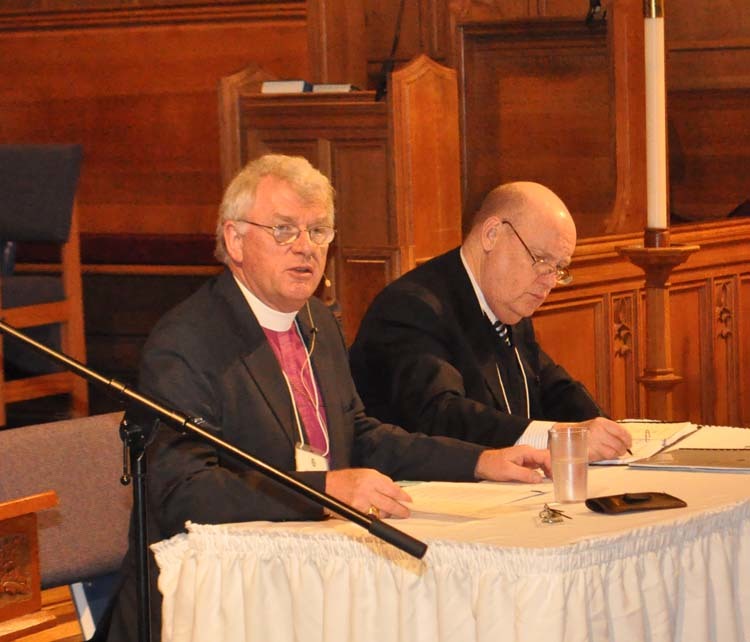 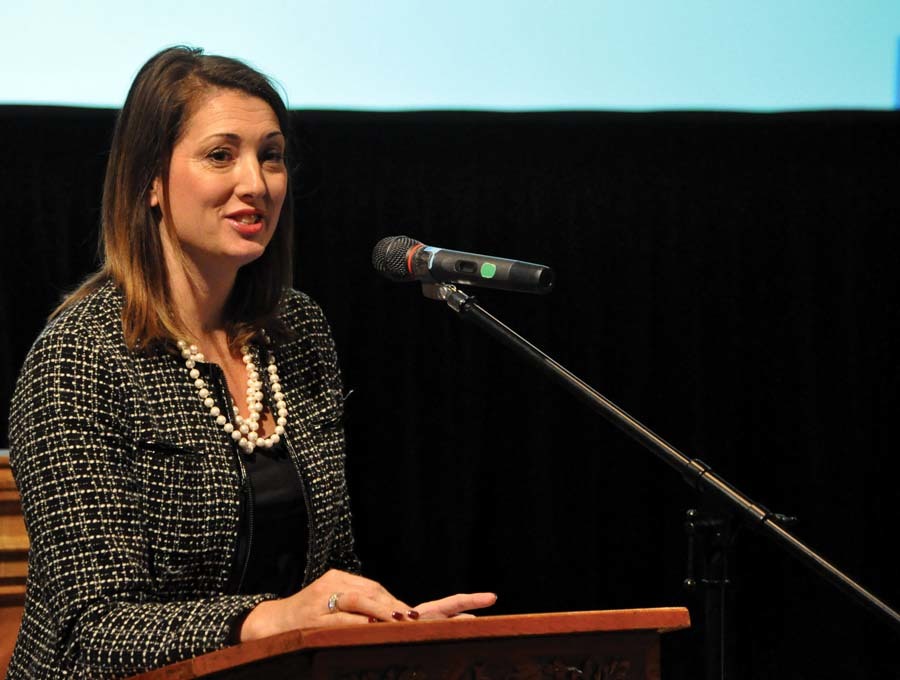 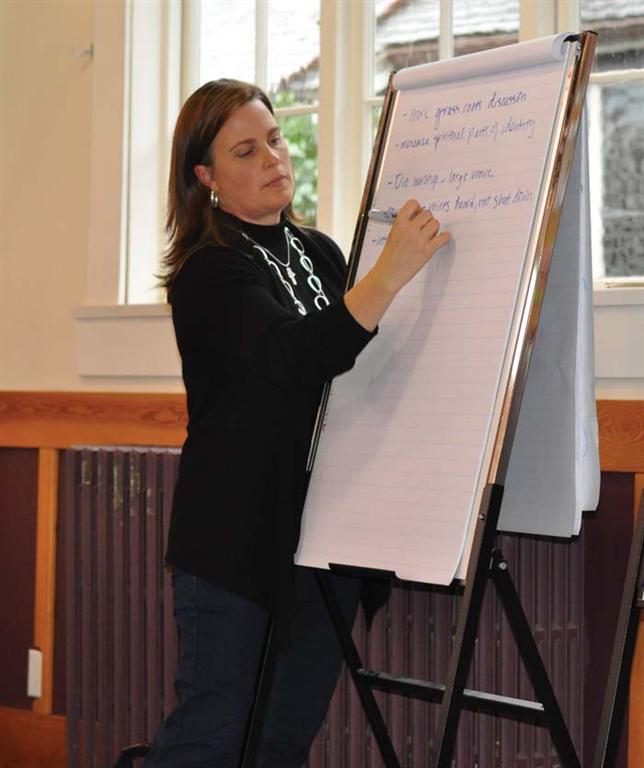 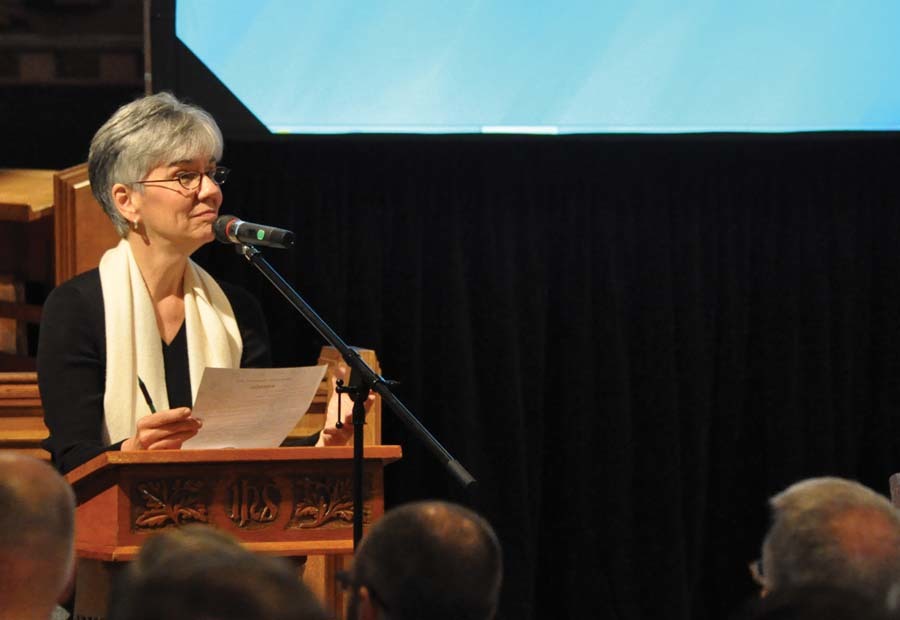 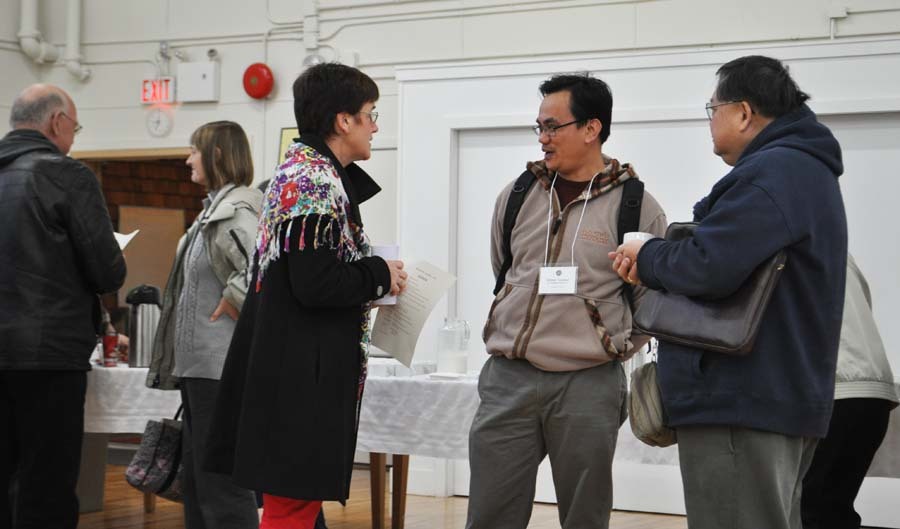 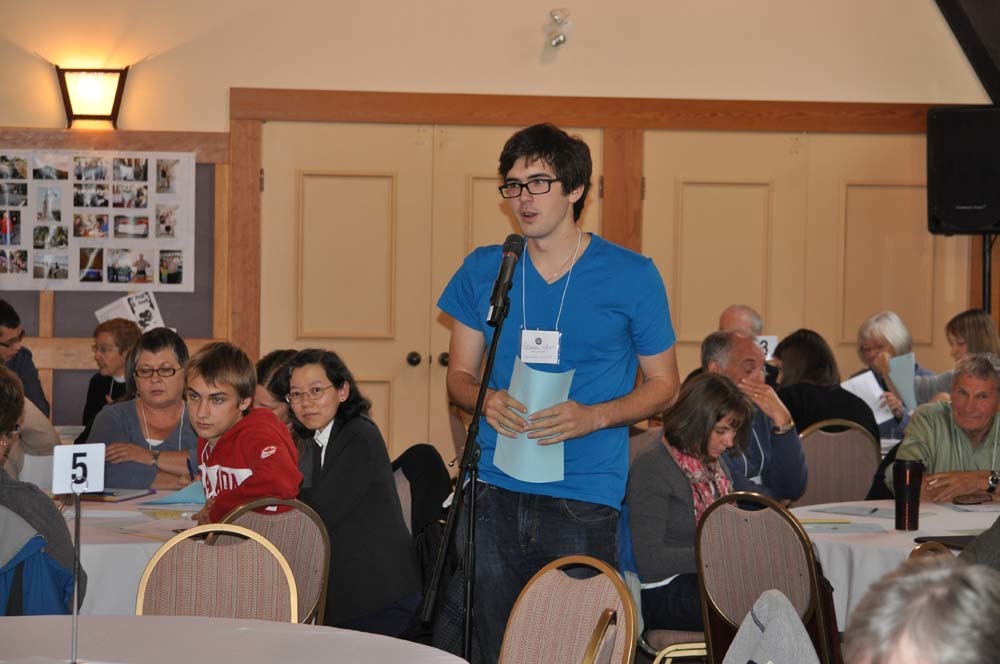 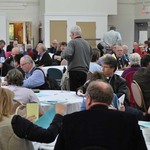 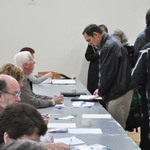 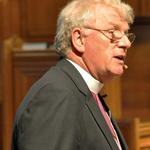 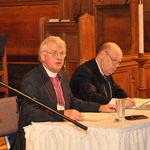 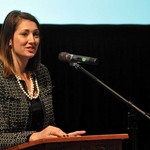 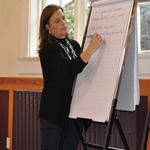 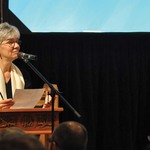 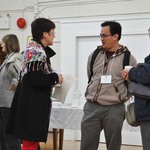 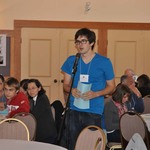 The first delegates came through the doors of the St. Mary’s, Kerrisdale gym at 8:15am and for the next hour a steady stream of clergy and lay gathered and greeted one another over coffee, muffins and fresh fruit.

At 9:20am an announcement was made asking delegates to move into the sanctuary for opening worship and the opening of Synod.
There were a total of 201 present: 123 lay delegates, 99 clergy , 12 from Diocesan Council and Bishop Michael.

Following worship, Bishop Michael welcomed Synod and thanked delegates and clergy for taking the time out from their weekend to participate in this special meeting.
Bishop Michael welcomed the three guests: Sarah Howard from Compton Fundraising Consultants, The Reverend Canon Melissa Skelton and The Reverend Andrea McMillin both from the Diocese of Olympia.
Chancellor George Cadman declared that it was apparent that a quorum was present

Bishop Michael’s Opening Remarks
Bishop Michael made reference to the introductory discussions and preliminary planning that has gone on for the last four years around funding for diocesan ministry. He spoke about the 2.9 million dollars in the Anglican Initiatives Fund and the various ministries that grants from the interest from that fund helped develop around the diocese. Bishop Michael stated that the Anglican Initiatives Fund did not have a particularly high profile around the diocese and funding become very difficult with the loss of 28% of the diocesan budget following the walk-out of several clergy and congregations at the 2002 Synod.
Four years ago litigation began between the plaintiffs, a group of trustees from four of the parishes that walked out of the 2002 Synod and the defendants, Bishop Michael and the Diocese of New Westminster. A year ago, with the litigation over and a new beginning on the horizon it seemed like a good time to start building a case for a diocesan financial campaign and Together in Mission was developed. Together in Mission in terms of its structure is similar to campaigns being launched or contemplated in other dioceses across the Anglican Church of Canada and near completion in the Diocese of Ottawa and the Diocese of Toronto.

The D of NW case proposed : 6 part-time hospital chaplains, establishing Anglican ministry on the campuses of our universities, the planting of new communities of faith that reflect the ethnic make-up of the
neighbourhoods where the faith communities exist (Filipino and Korean communities make up the bulk of those communities and there are an excellent cohort of priests available), the training of priests and ministry to young adults.
The “working” goal of the campaign was $19 million over 4 or 5 years with 10% to be directed to the National Church and the remaining 90% split evenly between the parishes for ministerial or capital projects and to the diocese for funding the ministerial initiatives outlined in the Together in Mission case.
Anglicans in the diocese have given approximately 10 million dollars annually into the “collection plate” in each of the last three years. There is capacity and generosity in our diocese.
The Bishops OPENING STATEMENT is available by clicking the link.

Bishop Michael then introduced Sarah Howard of Compton Fundraising Consultants to go through the feasibility study report and recommendations.

Sarah Howard
Sarah gave much the same report that she presented to Diocesan Council, September 11th.
Of the 39 interviews conducted for the feasibility study late last spring and early summer, all interviewees were supportive of their parishes and the diocese.
• A substantial majority were concerned primarily with the vitality and the sustainability of their parishes.
• 24 of the 39 said they would give a gift to the proposed campaign with an identified total from those interviews in the range of $300,000. 11 of those interviewed said they would work on the campaign but there was no “Chair” identified.
• A majority saw the case as a diocesan wish list without a solid business plan and for that and a variety of other reasons they did not support it.
• The proposed revenue split between parishes, diocese and national church was not supported.
• The interviewees had a variety of opinions about why they and others did not support a financial campaign at this time.
• A common view was that the church is no longer the place where churchgoers give first. There is constant competition for donor dollars.
• The church must become more efficient in using donor dollars. Regular reporting on how revenue is used and evaluation of programs and initiatives supported by those dollars must be improved. The church can no longer rest on its laurels and just expect to receive gifts.
• 18 of those interviewed believe there are still wounds from the split that happened ten years ago and it is too soon to start a campaign of this magnitude.
Looking at the parish surveys that were distributed by Compton as another component of the study, 61% of parishes have not embarked on a capital campaign in the past five years. The top three priorities for parishes in terms of what they would do with money raised were: capital improvements, clergy and staff , and youth and children’s ministry.
It was Compton’s finding that there was not sufficient support to launch a 19 million dollar campaign over 4 or 5 years.
Although Compton recommended that the diocese not embark on a campaign they did supply a number of recommendations to assist and support parishes in order to help them achieve their funding goals and to develop a short list of diocesan projects founded on solid research and planning. A communications strategy that clarifies the role of the “diocese” and its connection to parishes is necessary.
Reporting and evaluation of diocesan use of funds needs to be communicated more clearly and frequently so that members of parishes who are the donors have a clear understanding of where the money is going. Compton also recommended the establishment of a working group consisting of people with business training and experience to advise the governance structures of the diocese on the closing of unsustainable parishes.

Table Discussions
Canon Melissa Skelton was invited to address Synod. She outlined the process of the “Circle Conversations” model. There would be two sets of questions, the questions would be read in silence, the participants would then reflect on the questions and take turns going around the circle, each person given an opportunity to respond in a safe, clear, disciplined way, ensuring that every voice was heard.


The circle conversations took place in St.Mary’s, Kerrisdale, parish hall and gym. Members of Synod were enthusiastic and engaged. There were two scheduled conversations following each set of questions, one from 11:15-11:50am and the second from 12-12:40pm. Each of these was followed by a period of 10 minutes where the recorder from each table were asked to come up to mics positioned in the room and report, “themes” that had developed at the tables and had occurred during the discussions. The themes were listed by the facilitators on flip-chart paper.
These themes will comprise the majority of information used in the report.

Closing
Just prior to 1pm, the plenary gathered in the sanctuary and Bishop Michael again thanked the delegates and clergy for their attendance. He thanked Melissa and Andrea for their facilitation of the two sessions, and for the work they did organizing and planning in the weeks the led up to the November 17th meeting.

Bishop Michael explained that the material collected will be collated and brought to Diocesan Council and then perhaps to a smaller group for focus and reflection. The next step will see this material in an edited and organized form for distribution.

Bishop Michael reflected on the use of the word diocese in the Compton report and how that word is generally misunderstood and misused as synonymous with Synod Office. Bishop Michael reminded Synod that the parishes of the Diocese of New Westminster are the diocese, the Synod office and staff serve the diocese. He suggested that a different word or phrase be substituted for diocese in a sentence that occurred more than once in the Compton report, “the diocese needs to support that parishes.” He suggested that the phrase be amended to read “the parishes of New Westminster need to support the parishes.”