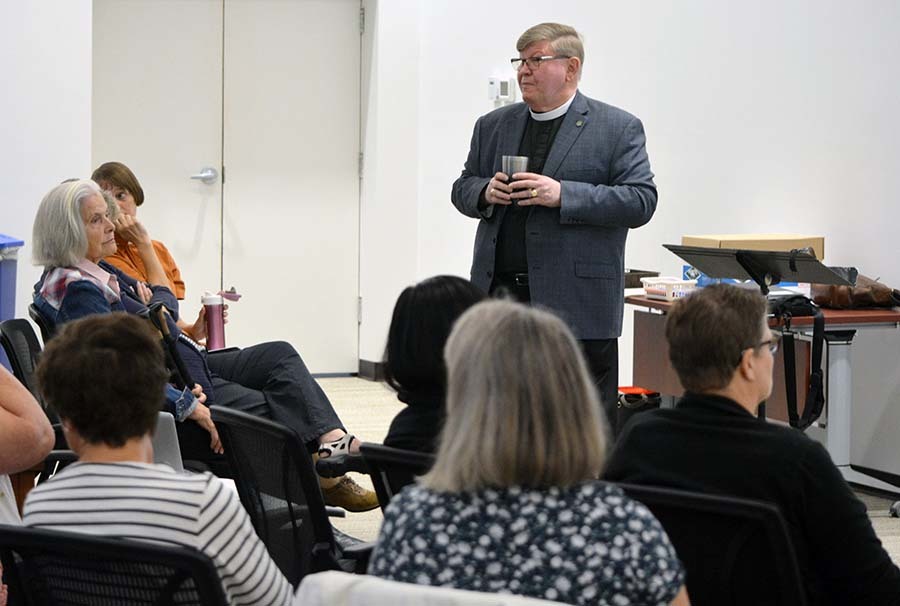 The Special Synod preparation sessions held September 8, 10am at the Synod Offices, 1pm at St. Christopher, West Vancouver and September 15, 10am at St. Matthew, Abbotsford, 1pm at St. Cuthbert, Delta were a joint effort of the entire Constitution and Canons Committee.  Together we planned the agenda and the process used for each session.  Sharon Grove provided steady and valuable logistical support for all four sessions as well as helpful responses to some of the questions and comments made during the sessions themselves.  She also took on the job of collating the responses from all the sessions.  Jane Hope came to the first two sessions on September 8 and served as note-taker as well as sharing her perspectives on the work of the Committee.

Beginning with the 50+ in attendance at the first session we had an excellent aggregate turn-out for the preparation sessions.  More than 100 clergy and lay members of Synod (and interested folks) took the time to attend and provided the Committee with a wide variety of comments and suggestions.  Whether large or small, each session was filled with energy and an engaged spirit.

From the sessions we learned that people want a canon that is intelligible and that provides a degree of flexibility for the foreseeable future.  We were able to talk about the difference between the canon and any relevant regulation(s).  The canons provide the framework and principles for the election of a diocesan, coadjutor and/or suffragan bishop.  The regulation, which can be approved by Synod or Diocesan Council on one reading, will provide greater detail in terms of the process to be used in the context of an actual election and will reflect attentiveness to the contemporary context of the election.  There was a commonality in the comments made throughout the diocese and an affirmation of the substance of the proposed canons even as suggestions for clarification were made.

The comment that surprised me was around the circumstances in which an election is required.  The proposed Canon 2 currently names only resignation or retirement.  In two sessions we were reminded that a vacancy could occur by the death of a sitting bishop.  This will require some thinking on the timing of an electoral synod as presently outlined in the proposed Canon.  In one session, a participant asked how a bishop can be removed from office and what such a circumstance might mean for the Canon.

It’s important that the members of Synod know how well they are being served (i) by Archdeacon Douglas Fenton who has been charged to facilitate a comprehensive review of our Constitution, Canons and Regulations; (ii) by our legal officers, Don Paul and Jennifer Dezell who offer valuable legal advice, and (iii) by Sharon Grove and Jane Hope who have given generously of their time and talents as well as their wisdom as committed lay members of our Diocese.