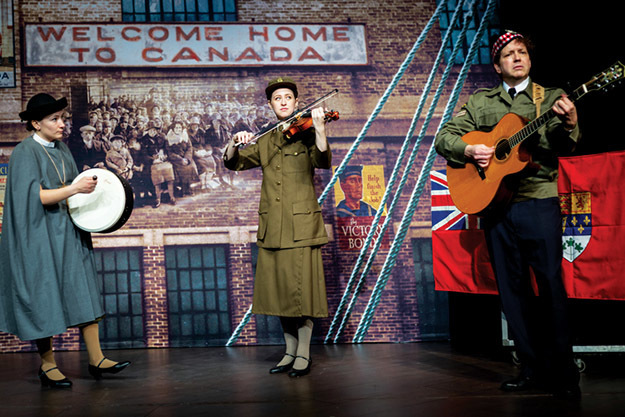 Ladner resident Allen des Noyers, artistic and music director, composer and playwright, has been invited to take his historical musical Pier 21 to the very place that inspired his Celtic - and Swing-flavoured musical.

Pier 21 is best known as the eastern seaboard receiving station for almost one-million emigrants who entered this gateway to Canada at Halifax between 1928 and 1971 (when the immigration shed was closed). But it is the early decades of the Pier’s history, explored in this new musical, which attracted organizers of a 10-day celebration in Halifax marking the 20th anniversary of the creation of the Canadian Museum of Immigration.

The talented director of Canadiana Musical Theatre Company immortalizes in powerful vignettes the adventures, heartache and hopes of emigrants and refugees fleeing Europe for Canada in the dark days of WWII, Canada’s military personnel embarking for service overseas, and of war brides and a new generation of migrants arriving in postwar Canada. This rich and touching musical drama will be performed on-site from June 29 to July 8. But just before the Halifax performances, the musical will also be performed at the International Metropolis Conference in Ottawa where the theme of Migration is being explored by delegates from around the world.

Creator of the first productions for the Rosebud Dinner Theatre in the small community of Rosebud, home of Alberta’s largest rural professional theatre, Allen is also co-founder of Vancouver’s Pacific Theatre, and composer of more than 200 songs. He has performed in some 4000 presentations of his own dozen-plus plays, touring across Canada entertaining audiences in several major centres and in nearly every city in British Columbia.

Members of St. David’s, Tsawwassen lay claim to their own ‘Captain George Vancouver’ and/or ‘Captain James Cook’ in the person of Allen des Noyers, whose portrayal of those historic figures at parish events are colourful reminders of this coast’s maritime past.