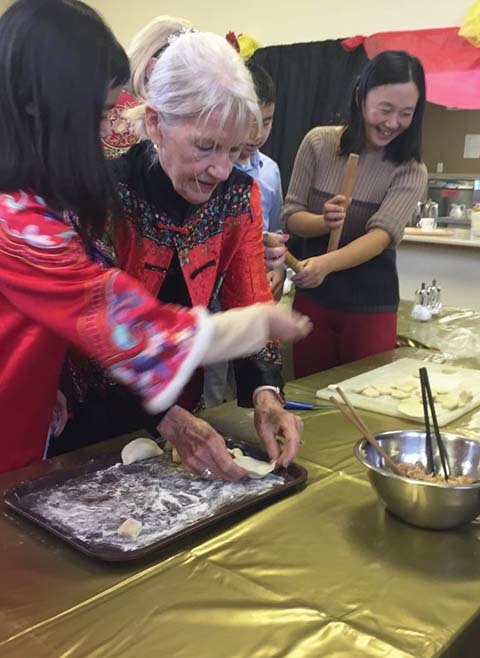 The traditional bright-red holiday decorations of Lunar New Year introduced congregants of St. David’s, Tsawwassen to the first parish event held in recognition of one of the world’s major celebrations.

Claire Forster, Claudia Niu, and Jenifer Zhu (newly come to St. David’s) organized and co-ordinated a Lunar New Year luncheon February 18 to welcome the surrounding community to a microcosm version of an event that is likewise known as the Spring Festival. “It was also an excuse to learn how to make and eat Chinese dumplings”, quipped Claire Forster.

While the luncheon featured a demonstration of making Jiaozi (crescent-shaped dough filled with minced meat and finely chopped vegetables), it took many more hands to help Claudia and Jenifer cook some 400 dumplings that came steaming hot to the buffet table.  Also, Jenifer’s mom, Xiaocong Wu, contributed a variety of appetizers to a menu that included salads plus two types of bean soup.

Juliana Marks transformed the parish hall with decorations appropriate to the occasion, accenting the colour red -- much loved by the Chinese and other Asian cultures in general for it represents happiness and good fortune.

This year’s Lunar New Year celebration of the Yang Earth Dog began February 16 and ended March 2, while the Solar New Year began February 4. One is based on the earth’s movement around the sun (solar) and the other is linked to phases of the moon (lunar).

Several families new to the area were invited guests who came to the luncheon with the greetings and multiple blessings of their culture.