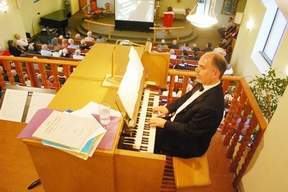 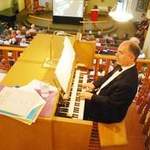 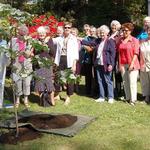 Bishop Michael was present at St. Hilda’s-by-the-sea Sechelt on June 29th to dedicate to the Glory of God their new pipe organ and also to celebrate the 75th anniversary of St. Hilda’s parish.
The Casavant-Freres organ, Opus 3272 was built for the Christian Apostolic Church congregation of Vancouver in 1975 and remained in their church building even after the 2005 purchase of the church by a community of Vietnamese Buddhist nuns. It was sold by the nuns to a couple of organ buffs who were going to use it for parts. Instead they notified various organizations that they thought might be interested in receiving the instrument as a donation as long as the recipient organization would arrange for removal and transport. St. Hilda’s costs were less than $10,000 to acquire an organ that would likely cost in the neighbourhood of $200,000.
Organist David Millard performed a varied repertoire of organ music during the June 30th special concert event and also accompanied vocalist Sara Douglas who sang Franck’s Panis Angelicus.
Image: Guest organist David Millard puts the organ through its paces during the June 30th concert.
photo by David Moul courtesy of the Coast Reporter.
There were a variety of other 75th Anniversary activities including participation in the Sechelt Canada Day Parade, the unveiling of a heritage plaque for St. Hilda’s and the planting of a 75th Anniversary tree on the St. Hilda’s grounds. In the image below we see Incumbent, the Rev. Clarence Li dousing the newly planted tree with “living waters” as members of the congregation look on in support.