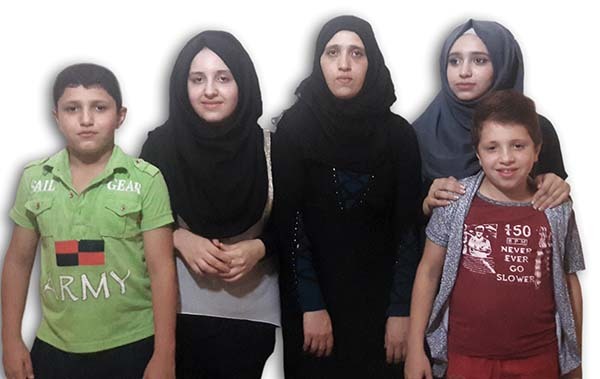 September is a time of new beginnings as folk return from holidays and resume routines. October brings Thanksgiving for our blessings. For Lama and her four children aged 10 to 15, a family who fled the conflict in Syria to a refugee camp in Lebanon in early 2013, life is now about new beginnings and thanksgiving. For over five years, Lama lived without security and her children lived without schooling.

After over a year of paperwork, interviews, phone calls, and waiting, Lama received the call that her refugee sponsorship through St Philip’s and the diocese of New Westminster had finally been approved and they would arrive in Vancouver on September 13, 2018. That news was joyfully received at St Philip’s, especially by Mary Lymburner, ODNW, who leads the refugee project portion of the very active Outreach Committee. Mary is also a member of the Diocesan Refugee Unit (DRU) of the diocese of New Westminster which is a Sponsorship Agreement Holder (SAH).  The DRU is chaired by Shannon Muir and staffed by Dr. Shankatula Soden.

As of December 2017, the Immigration Department was processing applications for almost 16,000 privately sponsored Syrian refugees. The hands-on support of private sponsorships has earned Canada attention from around the world.

Mary Lymburner explains that sponsorship involves many facets: fundraising, filing the application, finding housing, collecting furniture, welcoming and settling the family, enrolling children in school and adults in English classes, and supporting them materially and emotionally for at least one year as they find work and independence. Mary concludes, “It is a very interesting and rewarding process, as we get to know people from a very different culture and life experience.”

Many St Philip’s parishioners have experience with newcomers having sponsored a teenaged Kurdish girl in 2004, a Somali family of five in 2007, and are sponsoring Lama’s parents and younger brother. Lama and her children are also relatives of a family who came to North Vancouver Jaunuary 16, 2016, sponsored by R.E.S.T. the Regional Ecumenical Support Team which is associated with the Diocese of New Westminster through the diocese as an SAH. Members of the Parish of St. John’s, Shaughnessy are also considering sponsorship of members of this family.

St Philip’s parishioners give deep thanks to Mary Lymburner for her years of effort, and gratitude to all who have donated money, rented a house, provided furniture and house wares, and prepared for the family’s arrival. Now the personal and hands-on support begins.

For those of you who would like an opportunity to support Lama and her family please visit the Outreach – Refugee Sponsorship page on the parish’s website.

There is also a diocesan fund, The Archbishop’s Fund for Refugee Resettlement which distributes monies to newcomer families in need following their first 12 months as sponsored residents.

(prepared with files from Randy Murray)