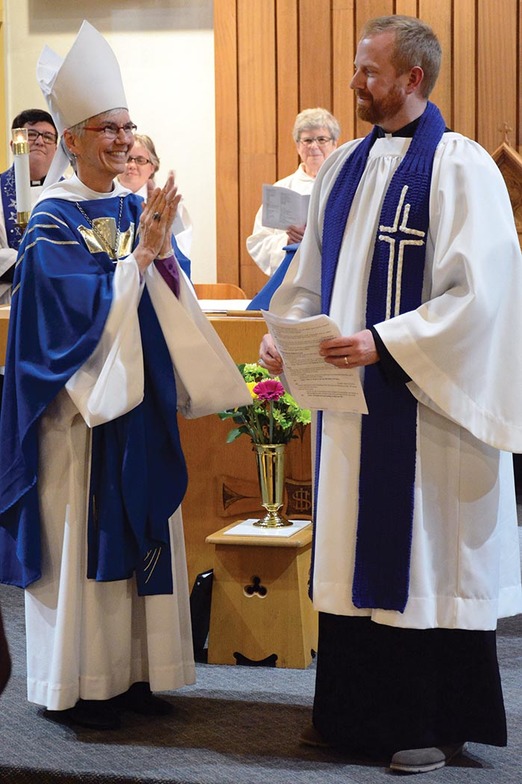 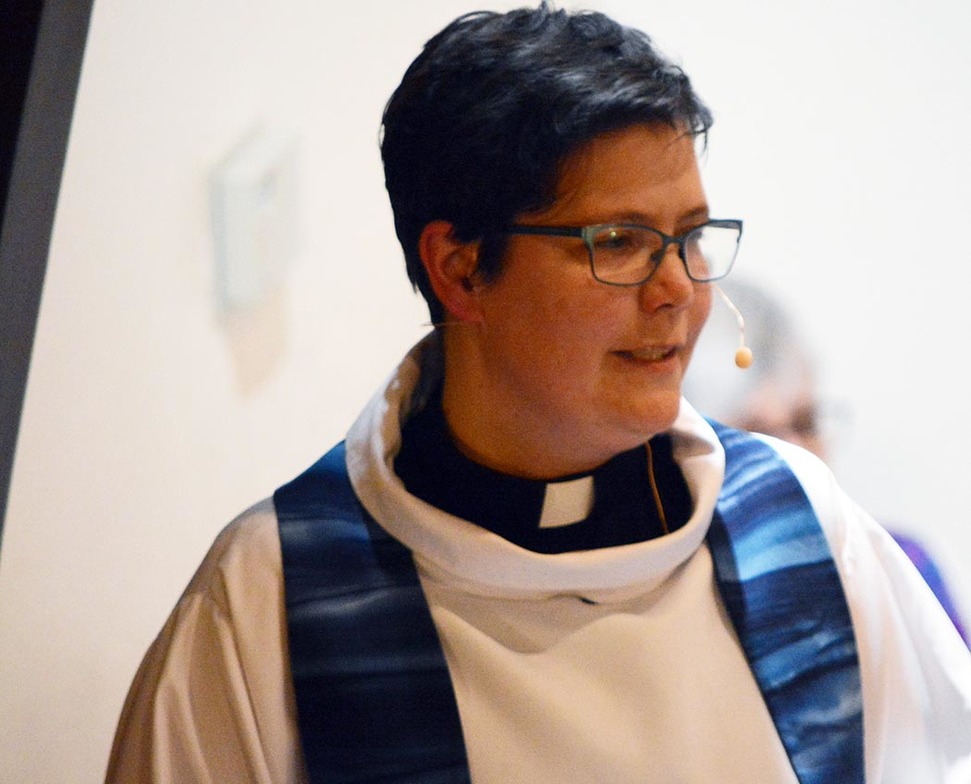 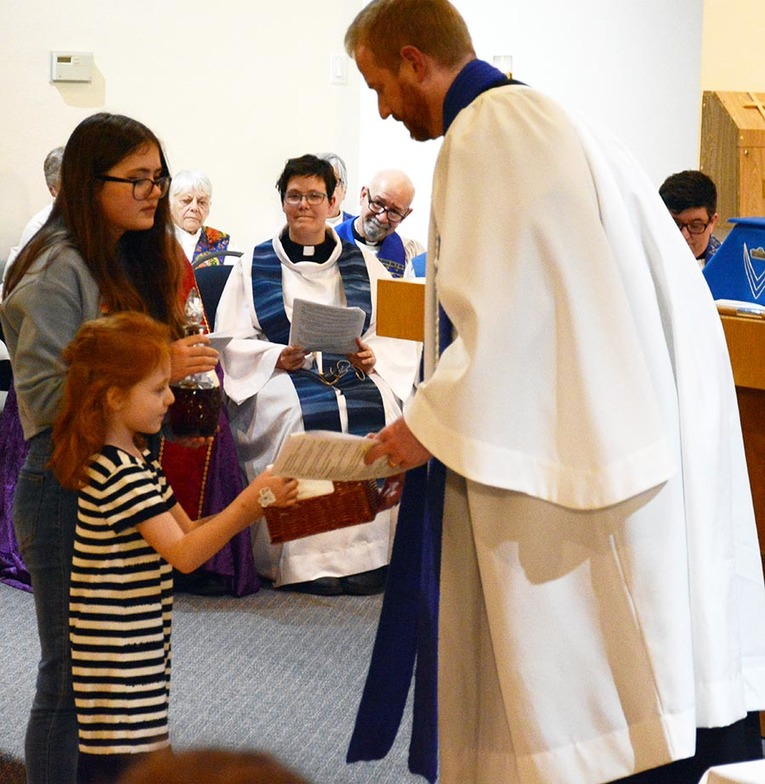 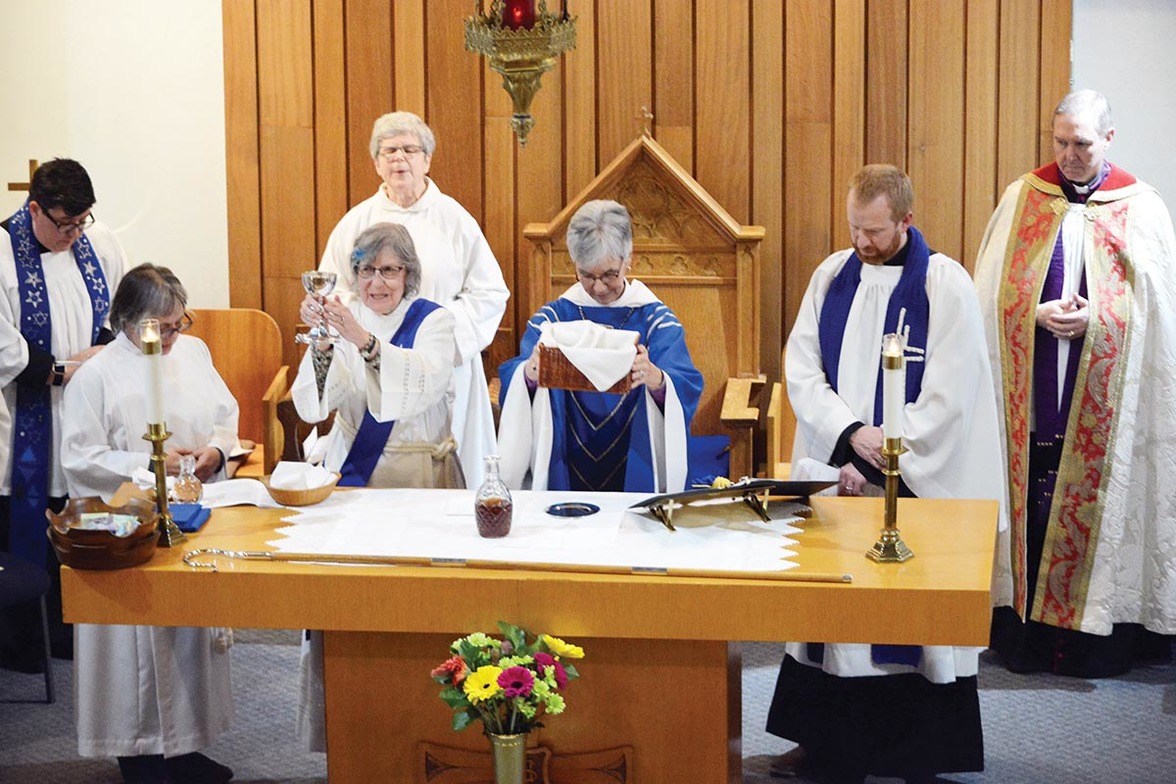 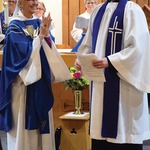 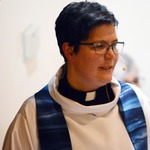 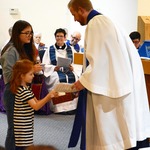 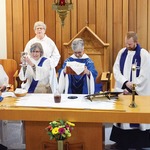 The Induction of the Reverend James Duckett as Rector of St. Timothy, Brentwood

On Monday, December 10, 2018, the Most Reverend Melissa Skelton inducted the Reverend James Duckett as Rector of St. Timothy, Brentwood.

Although the parish isn't that old (60+), St. Timothy's has an unique and fascinating history.

The parish began its life in ministry in the mid-late 1950s as a church plant of St. James' named Christ the King and continued as that for most of the next four decades.  When the parishes of St. Nicholas located on Triumph Street in North Burnaby and St. Andrew’s near Boundary Road both closed, a contingent of folks from those two communities began attending Christ the King. This took place in the mid-late 1990s.  In order to create community out of the three congregations the parish changed its name to mark the merger and St. Timothy's was born in the early part of this century.

Many thanks to Lyndon Grove, ODNW, Topic Editor Emeritus, author of the centennial history of the Diocese of New Westminster, Pacific Pilgrims, and long term, sometime parishioner at Christ the King/St. Timothy (currently at Christ Church Cathedral) for sharing some information about the parish.

“The first priest I remember there was Bill Lowe, dubbed ‘the martini priest’ for he was indeed skilled with a shaker. It was during his time at Christ the King that Tom Huntley carved the life-sized impression of Jesus wearing a crown, which hangs now in the balcony. When Stephanie Shepard became priest, she had it moved from the altar area out of fear of having it land on her head. Lowe went to the national office in some financial capacity—his background was in banking—and he was followed by Bob Purdy.

Purdy’s period coincided with the great trek to the coast of what people used to call hippies. Bob felt it less than kind that couples who had traveled across the country together were separated into male/female hostels in Vancouver, so he opened the parish hall to them. This was not a popular move, and Archbishop Somerville had to come and moderate an angry parish meeting.  I remember all this well, as I was then the rector’s rather haphazard and unreliable warden. “

Michael Ingham followed Bob Purdy. This would be Bishop Michael Ingham’s first ministry post in the Diocese of New Westminster and this appointment is what brought about his move from Ottawa to Vancouver. John Charnell followed the priest who be the next bishop of the diocese, and next came Charlie Lenz and Stephanie Shepard. Tim Dutcher-Walls now at St. David, Delta was backup for Stephanie for a while, however, Archbishop Skelton appointed an interim priest-in-charge, Ruth Monette who had recently completed her ministry as Director for Mission and Ministry Development for the Diocese of New Westminster.  Ruth began her ministry February 15, 2017, and remained in that ministry post until the end of April, 2018 when she was appointed rector of nearby St. Stephen the Martyr, Burnaby.  The Reverend Ayoob Adwar was appointed priest-in-charge May 1 and remained until the end of November.

The parish has been well-served over the years by many other interims and supply priests, among them: Ron Barnes (whose son and daughter-in-law are in lay leadership at St. Timothy's), Jeanette Stigger and Neil Fernyhough.

The history’s of parishes in the Diocese of New Westminster are fascinating, and arguably most interesting are the stories of the Anglican parishes of Burnaby over the past 100 years. But enough history, for on December 10, the 2018 version St. Timothy welcomed their new rector. Raised in Powell River and recently living and studying in Eastern Canada, the Reverend James Duckett returned to the West Coast with his spouse and young daughter and served as interim priest-in-charge of St. Paul's in the west end from October 1, 2017, until November 30, 2018.

As a youngster in Powell River he served at the altar both at the Roman Catholic Church of the Assumption and at St. David and St. Paul Anglican. He graduated from Max Cameron Secondary school in 1998, and pursued an undergraduate degree at UBC. While there, James connected to an evangelical church through a roommate. He completed his BA in English Literature (’03) and his BEd (secondary English and ESL) (’04). He then moved to Montreal and taught at a Christian school on the West Island while attending an evangelical church near downtown.

Students’ existential questions led him back to school at McGill where he earned a BTh (’09) and an MDiv (’10) through the Montreal School of Theology—a student first at MDTC (Dio) and later at Presbyterian College. He returned to teaching and his evangelical church before leaving both and moving to the public school system and attending Christ Church Cathedral where his formal discernment process began.

He met and married his wife, Sacha Bailey and was formally received into the Anglican Church by Bishop Barry Clarke who later ordained him (2015). Their first child, Eleanor, was born three months later. He was priested by Bishop Mary Irwin-Gibson in 2016, in the midst of his curacy at St. George’s in Ste-Anne-de-Bellevue.

James served as priest in charge at St Andrew and St Mark in Dorval briefly before moving to Vancouver where he filled the same role at St. Paul’s in Vancouver’s West End until his appointment to St Timothy, Brentwood (Dec 1).

The Parish of St. Timothy is a diverse and spirited community. They are inter-generational, they are involved with their community and want to be even more so; they are passionate about social justice and ministry to young people, and committed to building up their parish and the building up of God’s kingdom here on Earth

At the Eucharist on December 10, there was very much a theme of continuity; families, clergy and friends all who had been touched by the ministry at St. Timothy’s over the years were present and participated. The guest preacher for the Eucharist, the Reverend Rhonda Waters of the Diocese of Ottawa preached a wonderful sermon and her presence was symbolic of the connection that James has to his recent past.

Near the conclusion of her sermon which included a reflection on Advent, on waiting during the season, on taking time for one self, she also included references to the Gospel, Luke 5: 17-26 and its message of what can be done when people of faith are determined and work together and how that connects with the new rector and those with whom he now shares ministry. Rev. Waters said:

“Are you ready? Are you ready to see the world, to see your community, your very own parish as it really is? To see the need, and the trouble and the dreams; and to step out with boldness of faith to do something; to take a chance; to see what happens.

One of the drawbacks of being a guest preacher from far, far away is that I don’t know the challenges that you are facing, the risks you might be invited to take, the particular “roofs” you may need to take off…but I do know the priest who has been called to be with you at this time. I am excited for you. You have welcomed a brave and thoughtful and faithful and passionate Christian into your midst. I have known James a long time, before he was a priest, before he was even an Anglican…and I can attest to the fact that he knows something about risky, active waiting in pursuit of Jesus. So take advantage of that, enjoy getting to know each other and Sascha (his spouse) and Elly (their daughter) as well. James will have new ideas for you and you will have new ideas for him…so experiment a little…take some risks together and take risks for the sake of one another.”

Please keep the Parish of St. Timothy in your prayers as they move forward in their ministry together.

(More photos with captions available in a photo album at Anglican Conversation, the Facebook page of the Diocese of New Westminster.)