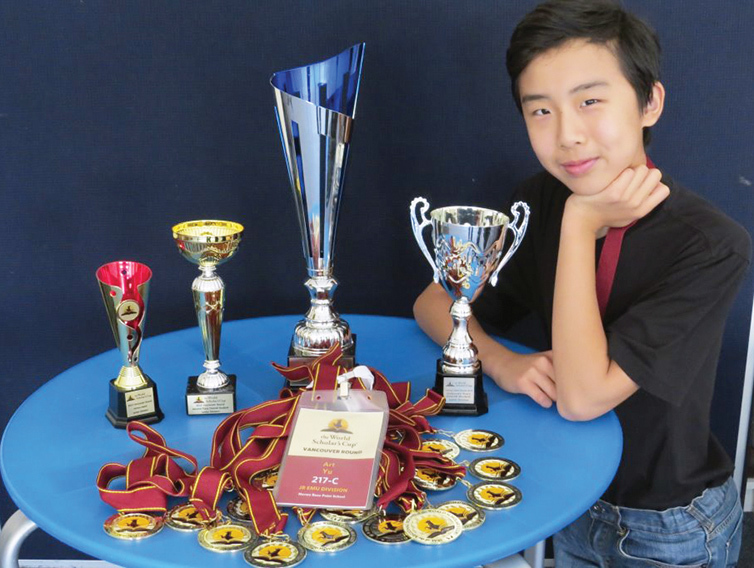 St. David’s Art Yu may be a future contestant on  Jeopardy! if he continues to pursue his quest for knowledge.

After sweeping the Regional Round in Vancouver earlier this year, Art and two other members of his PACE team, prepared for the September Global Round in Sydney, Australia, where Art qualified for forthcoming finals in the eastern U.S.

Studying for the Global Round in Australia was a ‘priority’ item on Art’s summer agenda but that also included the list of odd-jobs that earned him most of the $1500 registration fee.

In his first year of competition, Art won 17 regional faux-gold medals (known as SEALS) in the Junior Division (up to 13 years) and two prestigious Asimov Awards. One Asimov trophy was awarded for being the highest individual-score student in the curriculum part of the Scholar’s Challenge, and in recognition of the student’s vast knowledge and understanding of the WSC curriculum. The second was won for excellence in a science category.  Art then added the more distinctive SEAL that entitled him to compete in Sydney, where he achieved the one he will wear to Yale.

Apart from competing as an individual contender, Art joined his Vancouver teammates to win second-place in Team Challenge and four Top 10 trophies. Collectively the trio racked up 29 gold and 10 silver SEALS.

“World on the Margins is the theme of 2019 competitions”, Art explained, “divided into six categories – Art and Music, History, Literature, Social Studies, Special Area (unsolved mysteries), and Science –  for which reading lists are provided”. The format includes essays, debates, multiple-choice Q&A test papers, and projected multiple-choice questions where contestants use a clicker to select their answers.

For contenders, the road to Yale began in September 2018 but in a few weeks the often hard journey will reap its reward.

The Vancouver PACE Club meets weekly to study together toward goals of academic achievement.