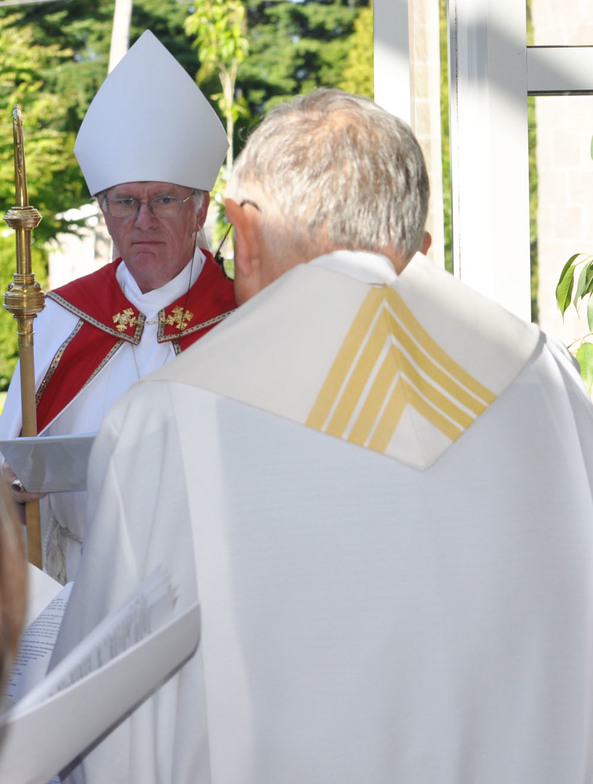 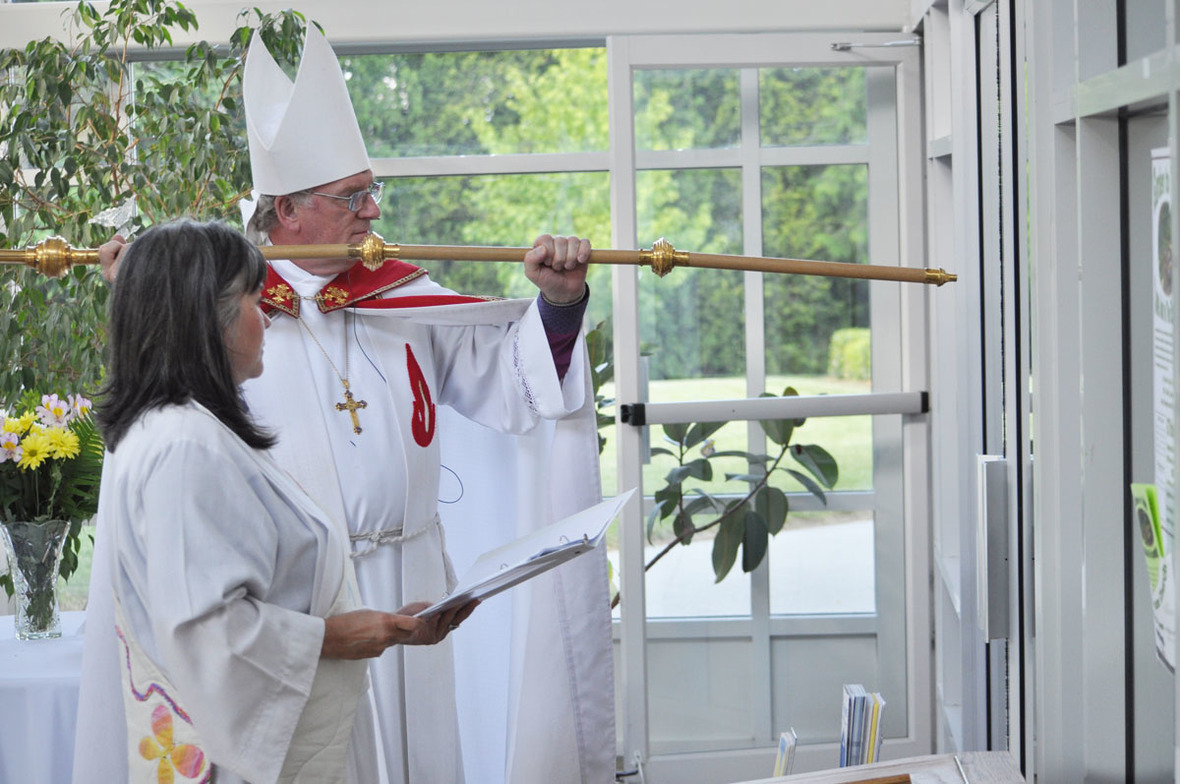 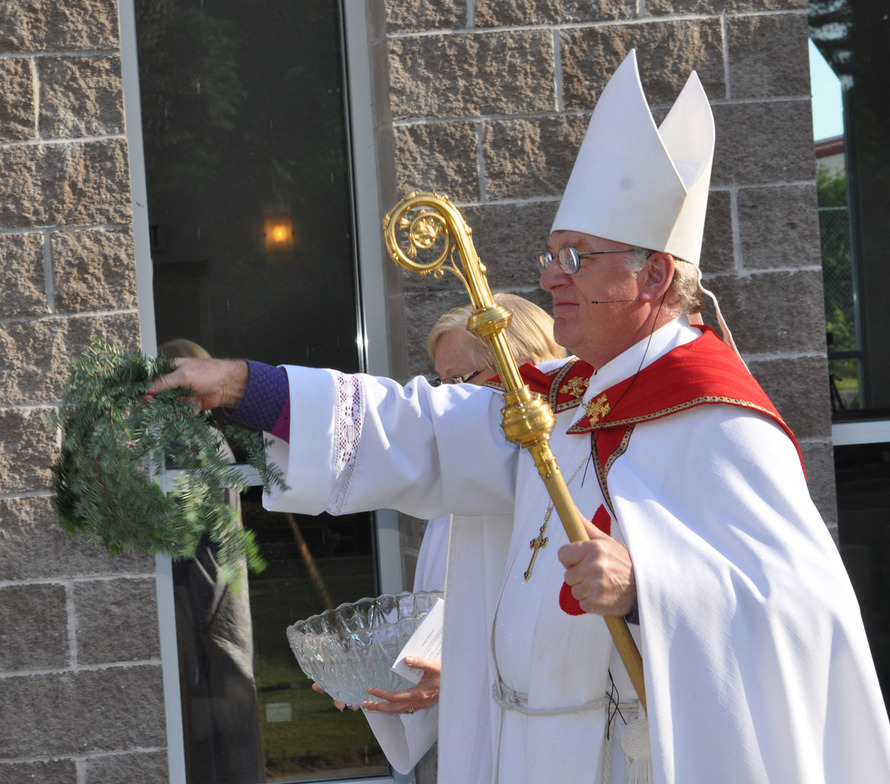 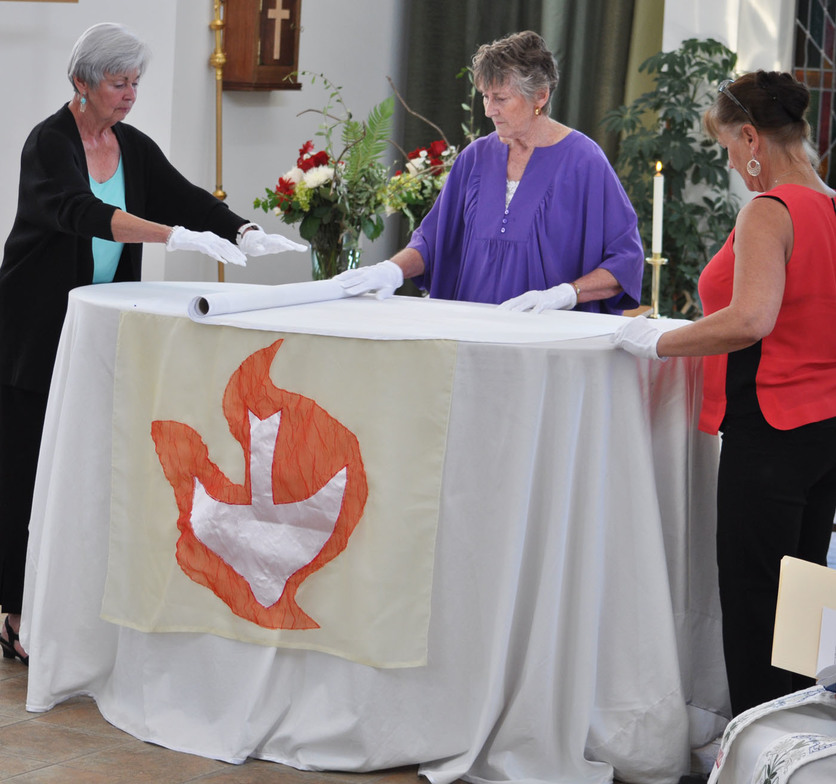 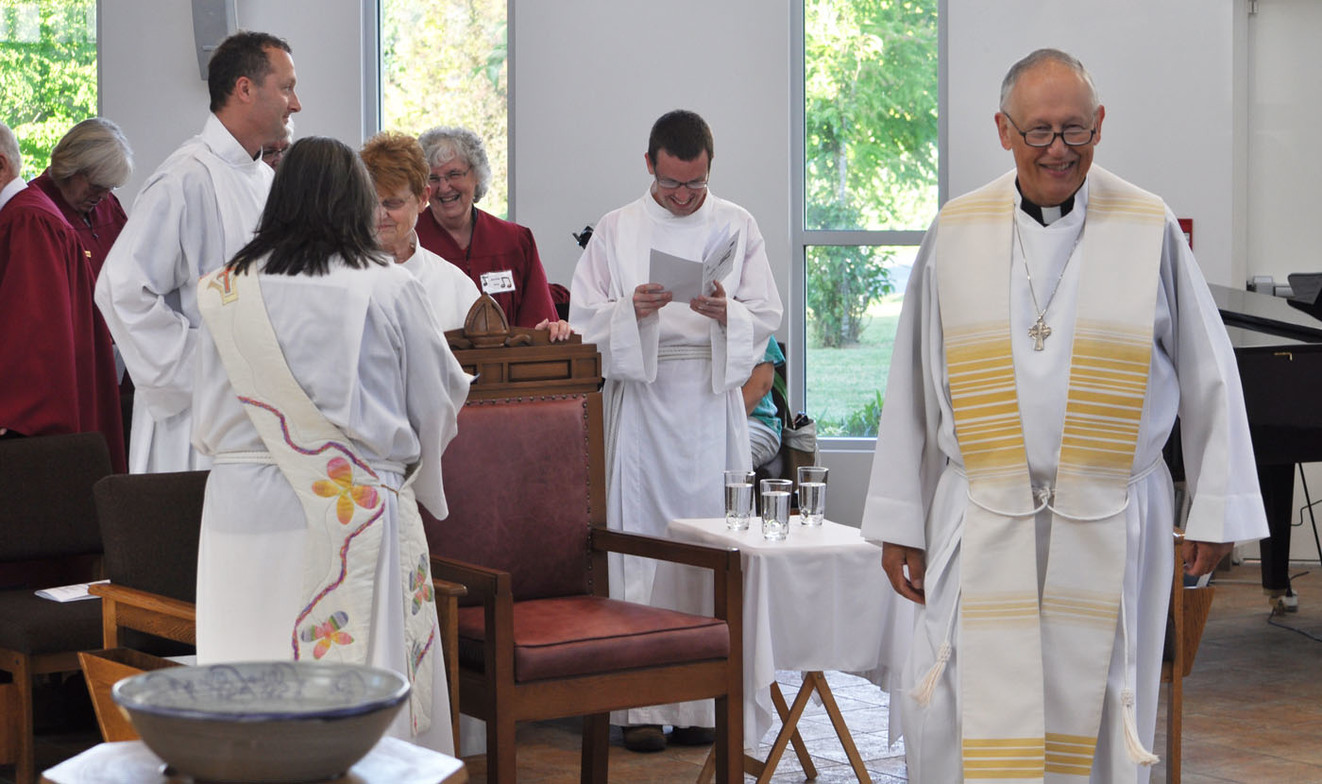 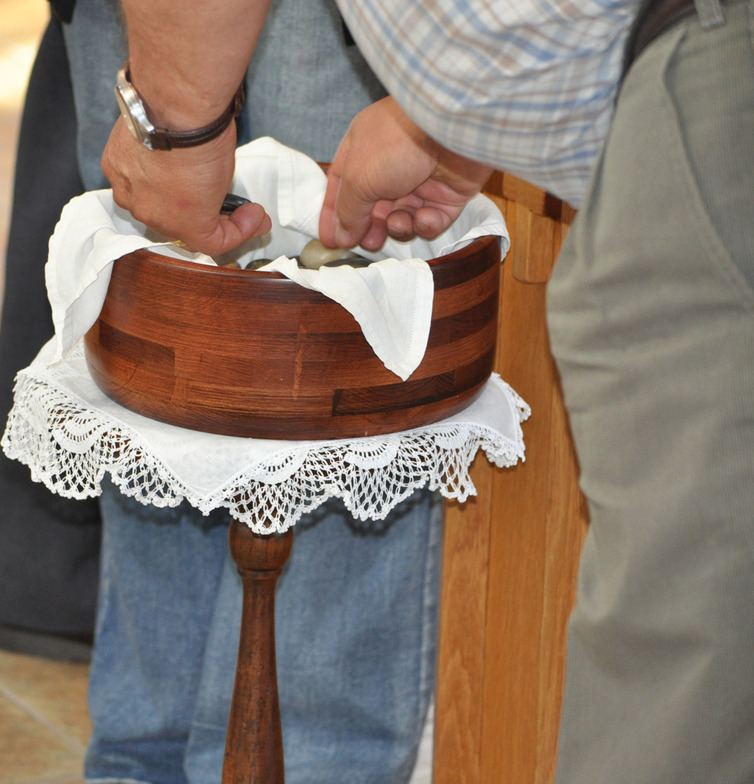 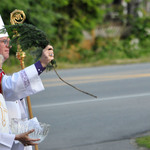 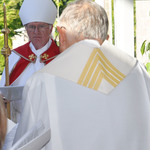 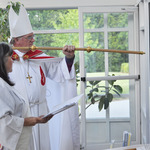 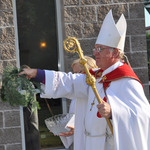 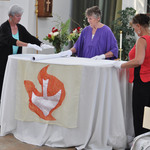 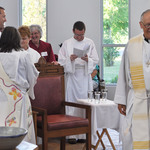 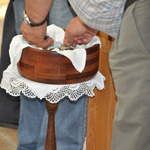 On Pentecost Sunday (also St. Dunstan’s Day), May 19th, 2013, the community of St. Dunstan’s, Aldergrove had a special reason to celebrate the Holy Fire of Pentecost for this was the day when they would burn their mortgage and make their last payment to the Diocese of New Westminster, signifying that they have a Church on land free of any legal financial encumbrances and that the buildings are also free and clear.

In 1994, with the arrival of new rector, the Reverend Beverly Stewart, two small parishes, St. Alban and St. Dunstan’s began a visioning process that would result in the amalgamation of the two communities on Palm Sunday, 1996. The two parishes, now one, worshipped at St. Dunstan’s, however plans for a new church building that would honour the history of both parishes and create a contemporary and flexible worship space were already in the works. On Halloween night 2000, a Molotov cocktail destroyed St. Dunstan’s which accelerated their building plans somewhat and what followed was four years of worshipping in local school gyms and ongoing discernment in the face of adversity about the kind of faith community they would become. Those years contributed to the formation of a truly remarkable, committed and focused group of people and had a great deal of impact on the kind of building that they built
In 2001, property was found and purchased , a Capital Campaign was executed by the Building Committee under the stellar leadership of Jim Stewart and construction of the new church underway by 2003. On St. Dunstan’s Day, May 19th, 2004, Bishop Michael dedicated the new building and on June 13th, 2004 the first Celebration of Holy Eucharist took place.
Now 9 years later, the mortgage paid, the pledges satisfied it was time to request that Bishop Michael Consecrate the Church.


The Consecration of a Church that took place June 18th, 2013 was an extraordinary liturgical event.

The service began with the Petition for Consecration read by the Incumbent and Churchwardens in the narthex. In the Petition the Bishop was informed that the land and church are paid for and free of encumbrances and then the Bishop was asked to “separate the same from all profane and common uses and to consecrate the said Church as ST. DUNSTAN ANGLICAN CHURCH, and set it apart forever for the worship of God, according to the rites and discipline of the Anglican Church of Canada.”
This was followed by the Act of Consecration which began with the Bishop and the worship team (cross and candles) and other attendants (Deacons and Archdeacons) exiting through the east doors of the narthex area, walking round the outside of the building, sprinkling it with Holy Water, then returning into the narthex through the west doors and proceeding to the church doors which were closed. The Bishop, using his Crozier, knocked three times on the church doors, and said,
“Open to me the gates of righteousness that I may go into them and give thanks to the Lord.”
The Incumbent and Churchwardens opened the doors and the Bishop marked the threshold with the sign of the cross and said:
“Peace be to this house from God our heavenly Father. Peace be to this House from his Son who is our Peace. Peace be to this House from the Holy Spirit, the Comforter. “
Following this, the Processional Hymn began and the Consecration of the Sanctuary and the worship furniture (Altar, Font, Lectern) took place.
From this point there were two distinct components of the liturgy that really stood out; the first was the conclusion of the Prayer of Consecration when the Bishop said:
“Pray that God will bless us who worship here, and those who come after us, our children and successors in the pilgrimage of faith.”
Then Bishop Michael with his Crozier traced the sign of the Cross upon the floor in front of the Altar, together with the Alpha and the Omega, and then said:
“I claim this place for Christ crucified, who is the First and the Last, and the Lord of all.”
After the Sentence of Consecration was read, signed and sealed the Bishop stood and said:
“Grant that this whole place which is here dedicated to you by our office and ministry may also be made holy by the sanctifying power of your Holy Spirit, and so forever continue, through your mercy, O blessed Lord God, who lives and reigns, one God, world without end.”
The congregation responded with “Amen.”
The Bishop continued: “And now, by virtue of the sacred office committed to us in the Church, I do declare to be consecrated and set apart from all profane and common uses this House of God under the name and title of St. Dunstan; in the name of the Father, and of the Son, and of the Holy Spirit.”
The second component began with the choir standing and leading the worship with singing while members of the Altar Guild and Deacons vested the Altar in a sublime choreography different than anything that is usually experienced within the confines of liturgy.
Once the Altar was fully vested with linens, candles and flowers the Celebration of the Eucharist began.
The preacher for the Eucharist was the Venerable Stephen Rowe, Archdeacon of Fraser and rector of the Anglican Church of the Epiphany, a faith community who are themselves beginning the task of building a new Church on their current site in the Guildford/Gateway neighbourhood of Surrey.
Archdeacon Stephen referred to all three readings in his homily: Gen 28: 10-17, I Peter 2: 1-5 9-10 and the Gospel John 20:19-21. He began with an appropriate quote from the Old Testament reading:


Then Jacob woke from his sleep and said, ‘Surely the Lord is in this place—and I did not know it!’ And he was afraid, and said, ‘How awesome is this place! This is none other than the house of God, and this is the gate of heaven.’

He then repeated the phrase “How awesome is this place!” And he went on to say that St. Dunstan’s is the “jewel in the crown of our diocese and a place of safety and welcome for the community.” For Archdeacon Stephen, St. Dunstan’s is an inspiration for The Anglican Church of the Epiphany, Surrey as they embark on a project to replace their church building with a “Church for the present age.”
The St. Dunstan’s community has demonstrated what it means to be a 7 day a week operation, not just a Sunday morning destination. This is a building for God’s use, not just a place that taps everyone’s energy keeping it “clean and tidy.”
After an examination of the Gospel in the context of St. Dunstan’s Consecration, Archdeacon Stephen made reference to the second reading, particularly the passage, like living stones, let yourselves be built into a spiritual house, to be a holy priesthood, to offer spiritual sacrifices acceptable to God through Jesus Christ.
He then said:
"We have the spiritual house in this newly consecrated Church, and now we have to work on being spiritual stones. That means we have to pray, in church and at home, to study the scriptures, to care for the poor and marginalized; in short to live lives worthy of our call. To be God’s people (called out of darkness into God’s marvellous light) we own the responsibility to tell others of God’s mighty acts ... to demonstrate the mercy we have received which gives to them and us hope, promise and joy.


So if you are ready to move ahead with the call, and even if you aren’t quite sure, I invite you to pick up a rock from this bowl when you have received communion. Take it home and put it somewhere where you will see it every day ... to remind you that God calls you to be a living stone ... as together we build the house of God (both here and elsewhere across our Diocese) and as we continue to be living stones ... ready to be built into a spiritual house ... that we continue to be God’s own people proclaiming God’s might acts as we are called out of darkness into God’s marvellous light."

Many of those present that evening did what Archdeacon Stephen suggested and picked a stone from the bowl after receiving the bread and wine of the Lord’s Supper taking into their possession a tangible expression of this rare and special worship experience at St. Dunstan’s, Aldergrove and of the call “To be God’s people.”

Images: Top and homepage, Bishop Michael and the Reverend Linda Varin sprinkling Holy Water on the St. Dunstan's grounds with 264th Street in behind. Top right, Bishop Michael listens to the Petition for Consecration. Upper left, Sprinkling Holy Water on the exterior of the Church. Middle right, Bishop Michael knocks with the Crozier three times on the closed church doors. Middle left, the vesting of the Altar. Lower right, choosing "Living Stones" from the bowl by the Font after Communion. Below, the Peace.