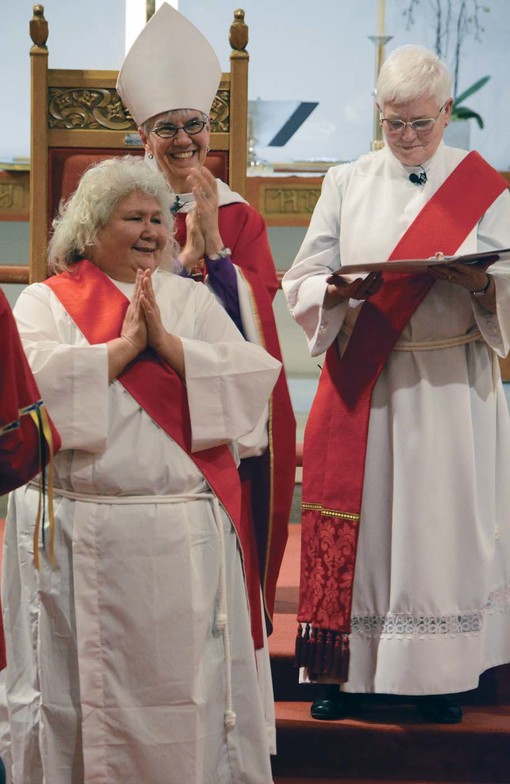 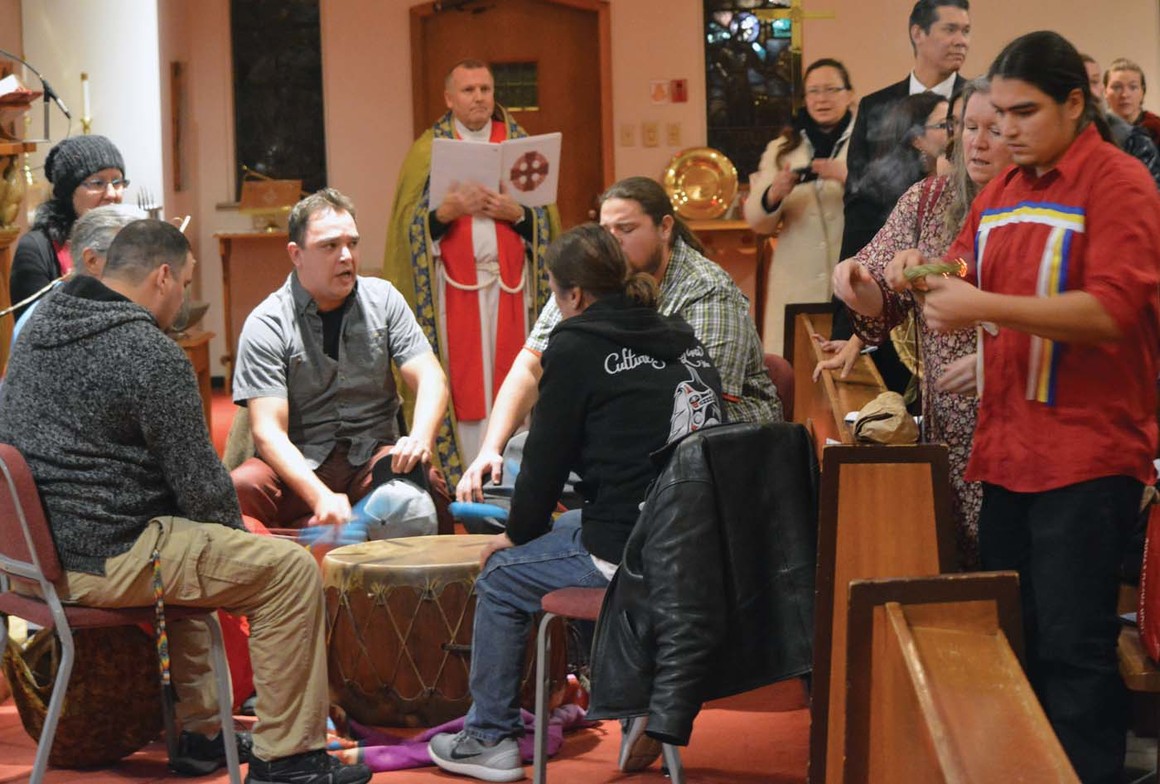 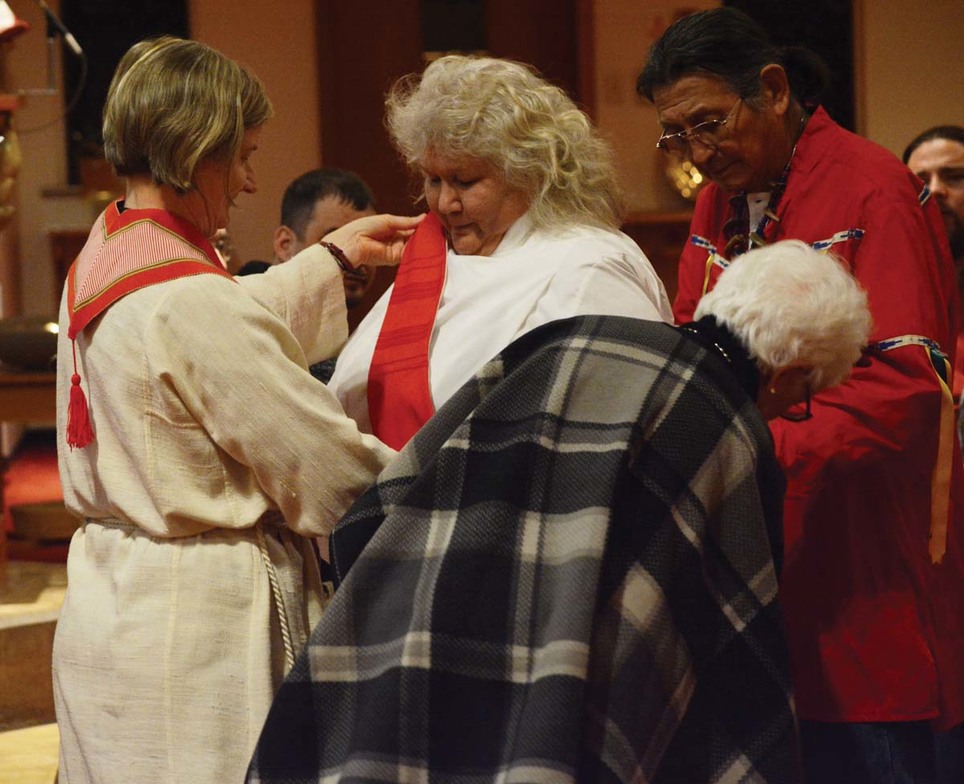 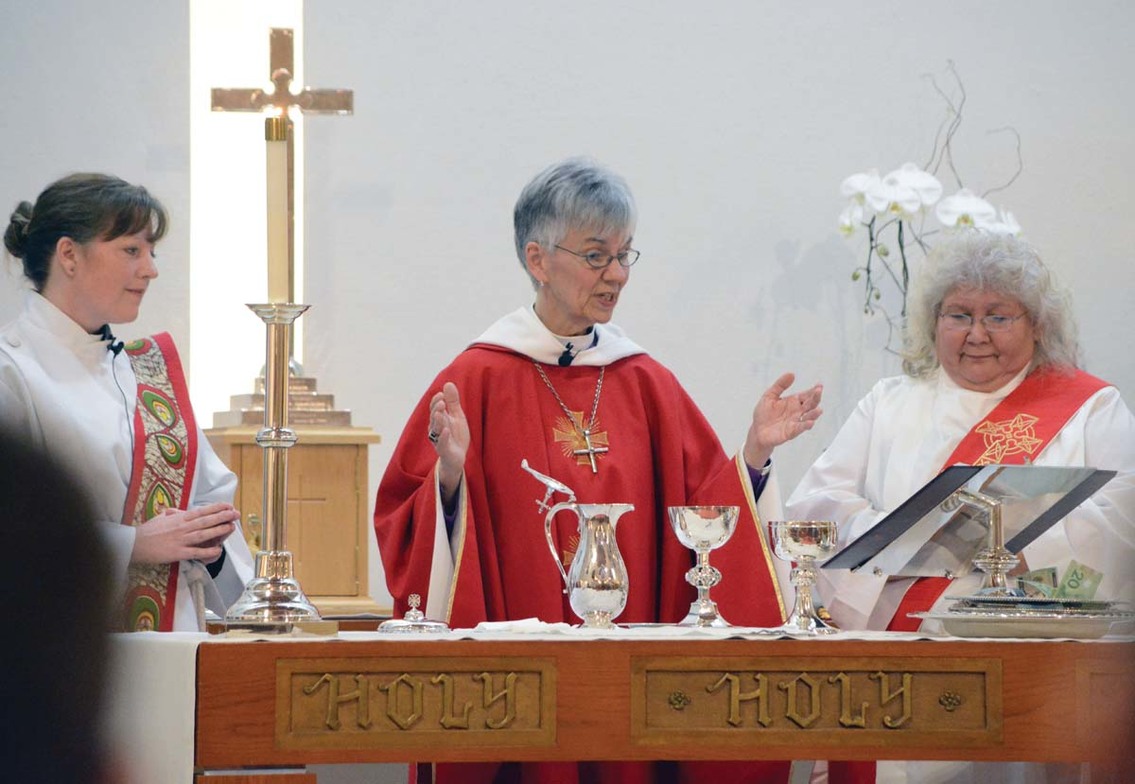 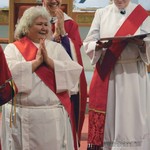 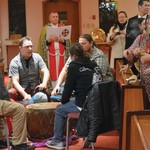 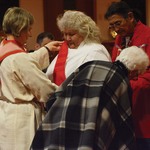 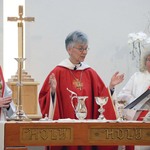 “I look forward to the blessings God has given me in walking in these two worlds and using the spiritual gifts given to me to bring healing and reconciliation, understanding and compassion for us all.”

These are the words that comprise the first sentence of the closing paragraph written by the Reverend Vivian Seegers when answering some questions that were posed to her two days following her historic ordination to the Transitional Diaconate by the Right Reverend Melissa Skelton at St. John’s, Shaughnessy on Sunday, January 21, 2018.

Vivian Seegers is the first Indigenous woman to be ordained in the Diocese of New Westminster. Her father was Dene from Fond-du-lac, Saskatchewan and her mother was Cree from Fort Chipewyan, Alberta. They lived on the "trap line" in the northern part of Lake Athabaska and moved to the outskirts of the mining town of Uranium City following her father’s death. Vivian was three years old when her father died.

The Ordination Eucharist was a joy and spirit-filled event, a truly prayerful and moving combination of the two ceremonial traditions. In a Media Release that Rev. Seegers circulated during the week prior to her ordination she wrote:

“The Bishop of New Westminster, the Right Reverend Melissa Skelton, has agreed that my Sundance Chief can present me, a Sundancer, as a candidate for ordination as a transitional deacon in the Anglican Church of Canada. This is a significant step in acknowledging the validity of First Nations traditional ways of worship and honouring our spiritual leaders.  For most ordinations a priest and a lay person present the person to be ordained.

Consent to the request for participation of the Sundance Chief has already sent ripples of healing and reconciliation to many of our First Nations brothers and sisters who suffered from the devastating teaching that our ways of praying were pagan and not valid and that our Medicine People were devil worshippers. This Wakan act represents another significant step in building right relationships between First Nations, the Church and the rest Canada.”

When asked to share some information about “Sundancer,” Reverend Seegers replied,

“I made a commitment to four years as a Sundancer in 2000. Sundancers are special people who are set aside out of the regular population for four days to fast and pray for the spiritual healing of our people. We receive spiritual gifts to share and strengthen others in healing ceremonies throughout the year. Our Sundance Chief takes care of us Sundancers and guides us just like a Bishop does with their priests.”

The Indigenous ceremonial traditions of the drum circle and smudging with braided sweetgrass, and the Ordination Eucharist complimented each other. According to Vivian,

“the drummers and smudgers are all people who have made their commitment to Creator to always go where they are needed to bring spiritual healing with their songs and with their medicines. They make themselves available for sacred ceremonies.”

Prior to the procession, those drummers and singers sang and drummed as the smudging ceremony took place between the chancel entrance where the drummers were located and the back of the nave where the procession had formed. Rector of St. John’s, Shaughnessy and Archdeacon of Vancouver, the Venerable John Stephen’s offered some words of welcome and the procession began with the singing of the hymn, “All Hail the Power of Jesus’ Name.”

The preacher for the Eucharist was the Reverend Emilie Smith, rector of St. Barnabas, New Westminster. Emilie was one of Vivian’s presenters and the two were classmates together at Vancouver School of Theology. She began by saying that she had been waiting with excitement to preach on these particular readings: Colossians 1: 24-29; Psalm 31: 1-5 and the Gospel, Luke 12: 4-12. She joked that initially she hadn’t intended to do any preparation and let the Holy Spirit guide her but thought better of it. In her homily she spoke of the perils that are threatening the planet because of thoughtless and greedy humans who have lost the connection to the sacred of God’s creation.  She also provided some background about Vivian and her journey from her childhood in the northern part of Lake Athabaska to her move to Vancouver in 1983 and meeting her mentor, downtown Eastside chaplain, the Reverend Monty Bingham in 1988. Through this mentoring relationship Vivian attended the Native Ministries Consortium at Vancouver School of Theology in 1992. She began studying for the MDiv at VST in 1999 (with classmate Emilie Smith and instructors like the late and beloved Bishop Jim Cruickshank) and received her degree in 2005.

The ordination section of the liturgy was particularly moving, with: the presentation to Bishop Skelton by the three presenters, the signing of the oath in the presence of the Executive Archdeacon, the Venerable Douglas Fenton, the examination by the bishop, the litany (led by the Reverend Liz Hamel), the Prayer of Consecration, the laying on of hands by the bishop, anointing of the ordinand with Holy Oil, the vesting of the new deacon by her presenters and the presentation of a Bible. This was followed by Bishop Skelton presenting the newly ordained, the Reverend Vivian Seegers to the congregation and inviting their welcome and what a welcome it was! Drumming, singing, cheering and thunderous applause.

The liturgy concluded with the Eucharist, the focus of Anglican worship with the new deacon assuming the role of Deacon of the Table, administering the Blood of Christ during Holy Communion and dismissing the congregation following the Closing Hymn, “Ye Watchers and Ye Holy Ones.” Before the dismissal the Reverend Seegers received another rousing ovation.

Vivian will begin this new phase of her ministry as Assistant Curate (1/2 time) at St. Clement’s, Lynn Valley with the guidance of the Reverend Lynne McNaughton and she will continue as ½ time pastor of Urban Aboriginal Ministry at St. Mary Magdalene in Vancouver’s VGH neighbourhood.