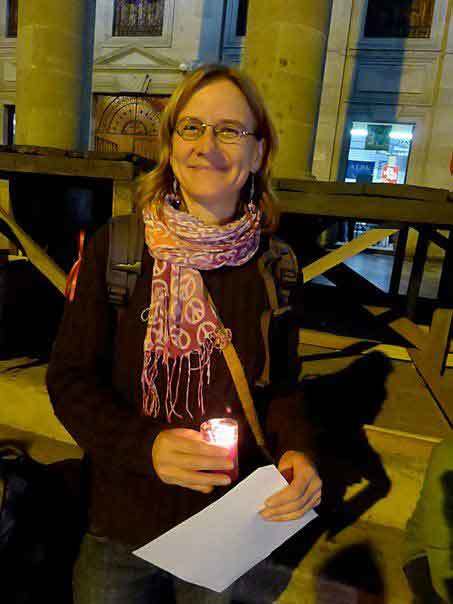 On February 14th, 2012 in Mexico City, the Reverend Emilie Smith, Priest-in-Mission on leave from the Diocese of New Westminster was elected co-president of the Oscar Romero International Christian Network in Solidarity with Peoples of Latin America, referred to by the acronym SISCAL. Please visit the SICSAL web presence.
During SICSAL’s bi-annual assembly there were two elections held, one for the Bishop president and one for the non-Bishop president. Emilie’s co-president-elect is Archbishop Gregorio Rosa Chavez, of San Salvador. There was one other candidate in Emilie’s election, a Roman Catholic lay-woman from Mexico.
Archbishop Chavez and Emilie succeed Bishop Alvaro Ramazzini and Sister Raquel Saravia, both of Guatemala.
Emilie is the first ecumenical president. SICSAL was founded by Monsenor Sergio Arceo of Cuernavaca, shortly after the martyrdom of Romero. Emilie’s close friend and mentor, Bishop Samuel Ruiz was also president of this organization.
One of the great hopes with Emilie’s election is that SICSAL can become more ecumenical. Since its founding, SICSAL has been almost exclusively Roman Catholic. At this latest Assembly there were five non-Catholics present (three Anglicans, a Baptist and a Pentecostal).
Issues of great concern that are being addressed by SISCAL member groups include: mining and resource extraction, rights of indigenous peoples, human trafficking, migration and the militarization of social protest. These matters of contention are all close to Emilie’s heart and she has had considerable practical and theoretical experience with all these issues. Through SICSAL these concerns are being examined and acted on from a-deeply-committed-to-justice Christian perspective
The organization has member groups in 25 countries including most of Latin America and the Caribbean, North America, a few in Europe (Spain, Italy, France and Belgium), Japan and Australia.
As president, Emilie does not have a term limit, she is co-president until she resigns. It is a 'representative presidency', not an honorary, or an administrative position. Emilie will go as she is able to various regions (all of Latin America and the Caribbean), and represent the organization, as decided by the Executive Committee. Travel is administrated during monthly Skype meetings, through email, or through the bi-annual regular meetings. Most decisions are made at Assembly (like the February 14th, 2012 meeting), or Executive Committee, and administration is looked after by the Secretary and his assistant (currently in El Salvador). Emilie will maintain her residence at Peace House in the Guatemalan town of Santa Cruz del Quiche, however she will be required to move around. The amount of visiting will be dependent on the number of invitations received from SICSAL regions and the availability of funds.
According to Emilie, it remains to be seen if her co-president-elect Archbishop Chavez will accept the position as he had left the meeting by the time the election had concluded. If he does not accept, Bishop Raul Vera Lopez of Saltillo, Mexico will be Emilie’s co-president.

Emilie is excited and grateful for this opportunity to expand her ministry to a much broader level. She will be “working very hard.”
Image: Emilie at a  the 2011 AIDS day candlelit vigil organized by the Anglican Church in Guatemala's second largest city, Quetzaltenango.