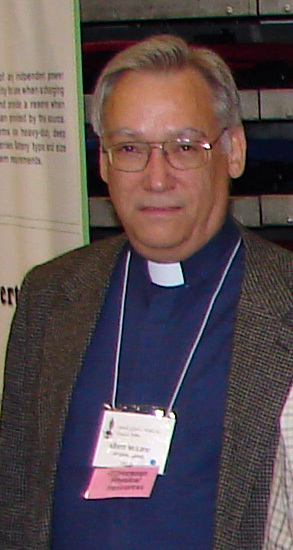 Further to the announcement that the Memorial Service for the Rev. Albert McLane will be held at The Cathedral Church of St. Michael and All Angels, Kelowna, BC on Friday, August 8, 2014 at 2:00 pm., Dean Nissa would like you to know that Clergy are invited to robe, the colour is white, and you can get dressed in the classrooms of St. Michael's House before the funeral.

The Reverend Doctor Albert Philip McLane, Priest, died early the morning of July 25th, 2014, after a very brief illness with cancer. Albert, (who was in hospice care at the time of his death), when learning the cancer was very aggressive and untreatable, gave himself into God’s care. The result was a very gentle passing from this life to the next.

Albert was born in Valdosta, Georgia. His family were committed Methodists but during his undergraduate days he was invited by a fellow student to the Episcopal Church and remained an Anglican for the remainder of his life.

During the Vietnam war, and knowing that conscription was virtually inevitable, Albert was determined that he should decide where he would serve. He applied and was accepted as a Band Officer in the US Air Force and was stationed in Weisbaden, Germany. Albert was very involved as a Church Musician in the Diocese of Olympia after his military service concluded. It was during this period that he completed his doctoral programme in Music. He and his first wife Margaret raised two sons in Washington: Andrew and Patrick.

Albert decided to study theology and enrolled as a non-sponsored student at Vancouver School of Theology, (VST) although ordination was much on his mind. He served as Interim Music Director during the mid-1980’s at Christ Church Cathedral after the departure of Patrick Wedd and the arrival of current Director of Music/Organist, Rupert Lang. Albert became a landed immigrant and continued with his musical career. He was very involved in contemplative prayer and offered workshops and trainings around the Diocese.

In the late 1990’s, Albert began attending St Alban’s, Richmond, invited by a friend: Alison Marshall. Albert continued in his musical career directing the Gallery Singers, the community choir that was for many years connected to Holy Trinity Anglican Church(12th & Hemlock). He also re-entered the ordination process supported by the clergy and people at St Alban’s.

Albert and Alison married and have a son, Aidan. They had just celebrated their 15th anniversary.

Albert was ordained a deacon on June 15, 2003, and appointed to a three year curacy at St Peter’s, Rosedale and All Saints’, Agassiz under the supervision of the Reverend Fred Tassinari, Rector of St John the Baptist, Sardis. Albert was ordained priest on December 7, 2003, and soon thereafter was appointed Regional Dean of Yale (April 12, 2005). His curacy was extended to four years. Following this he served as Honorary Assistant at St John the Baptist, Sardis before retiring to Kelowna. Albert remained active in priestly ministry assisting in parishes in the Diocese of Kootenay.

A memorial service will be held at St Michael’s Cathedral in Kelowna, on Friday, August 8th, 2014, at 2pm. 608 Sutherland Drive


Image: The Reverend Dr. Albert McLane at Diocesan Synod, May of 2006.