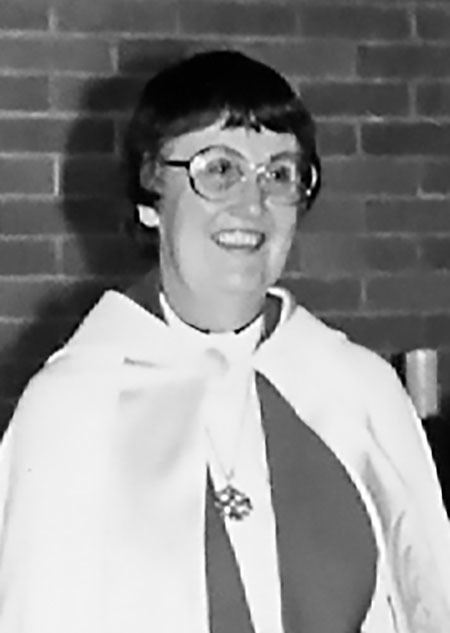 We commend our sister, Virginia Woods Briant, Priest, to God and give thanks for her historic ministry in the Diocese of New Westminster and in the Anglican Church of Canada.

Virginia was born in Portland, Oregon in 1926, where she was raised in the Baptist Church.

Virginia taught school in Alaska from 1953 to 1959, including a period with her husband, Bob, when they taught elementary students in a two room schoolhouse on an Aleutian Island. She also had a successful business career in Alaska. She was confirmed at St. John’s Episcopal Church, Ketchikan, Alaska in 1963. She transferred from the Episcopal Diocese of Alaska to the Diocese of New Westminster in 1973.

In 1973, she graduated from the Anglican Theological College and Vancouver School of Theology with a Master of Divinity, receiving the Chown Gold Medal and Cora F. McFarland Scholarship for the highest standing in the graduating class.

Virginia was ordained to the diaconate on June 24, 1973 and was then appointed Deacon at Christ Church Cathedral in Vancouver.

Virginia, one of the first six women ordained to the priesthood in the Anglican Church of Canada, was ordained by The Most Reverend David Somerville at Christ Church Cathedral on November 30, 1976. Recalling her ordination, Virginia noted the media frenzy that surrounded it. One reporter apparently asked her: "How did you know it was the will of God for you to be a priest?", and she answered: "How else could it have happened?" She continued to serve as Assistant Priest at Christ Church Cathedral after her ordination.

Virginia was Rector of St. Richard, Norgate, beginning in 1981 until she retired following a serious car accident.

Healing ministry was one of her key commitments, and she was a member of the Order of St. Luke the Physician starting in 1969.

Upon retirement she moved to Penticton where she was active at St. Saviour's Anglican Church.

Virginia is survived by her son Douglas and her two grandchildren Anna and Paul. She was predeceased by her husband Robert and son Michael.

In lieu of flowers the family asks that a donation be made to St. Saviour, Penticton.

A service will be held on Friday, September 17, 2021 at St Saviour, Penticton.

Please remember the Reverend Virginia Briant and her family and friends in your prayers.