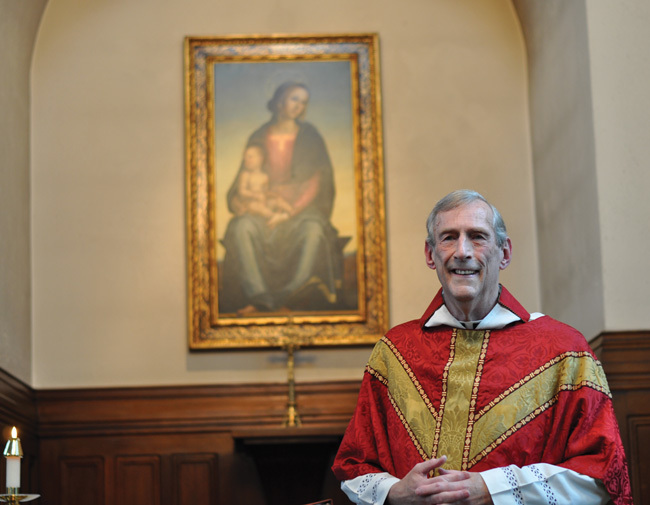 It was on the Feast of St. Thomas, July 3rd, 1987, that The Reverend Michael Collins Forshaw was ordained a priest in the Church of God at Holy Rosary, Cathedral in Vancouver. Twenty-five years later to the day, 40 worshippers gathered in the Lady Chapel at St. James’, Vancouver for Eucharist presided over by Father Michael.
The homilist for the Mass was the Rector of St. James’, the Rev. Mark Greenaway-Robbins.
Early in his address, Father Mark gave the congregation “two essential clues to Michael’s baptismal dignity of being a priest,” based on Michael’s own memories of his ordination. Number one, The Litany of Saints and number two, The Anointing of his Hands with chrism. Michael had shared memories with Father Mark of his experience of laying prostrate at his ordination and feeling the energy of the Communion of Saints praying for him. To this day he can feel the sensation of the chrism on his hands during and following the anointing.
Father Mark went on to read a quote from Michael’s 1983 Seminary application where he responded to the question, “What is the function of a priest?” Michael’s answer was “…the function of a priest is to equip and enable the people of God.” And that has been Michael’s calling, to help people answer their call to faith and to lead them in worship and in their spiritual formation.
Father Mark ended his homily with the following poem by St. Francis de Sales, but before reciting the poem he said these words to Michael, “We give thanks to God for the mystery of Grace as we see it through you.”

Do not look forward to what might happen tomorrow.
The same Everlasting Father, who cares for you today -
will take care of you tomorrow.
Either He will shield you from suffering,
or He will give you unfailing strength -- to bear it.
Be at peace then,
and put aside all ancious thoughts and imaginations.
[Have Faith - Pray!]