Under the Tarps at Christ Church Cathedral 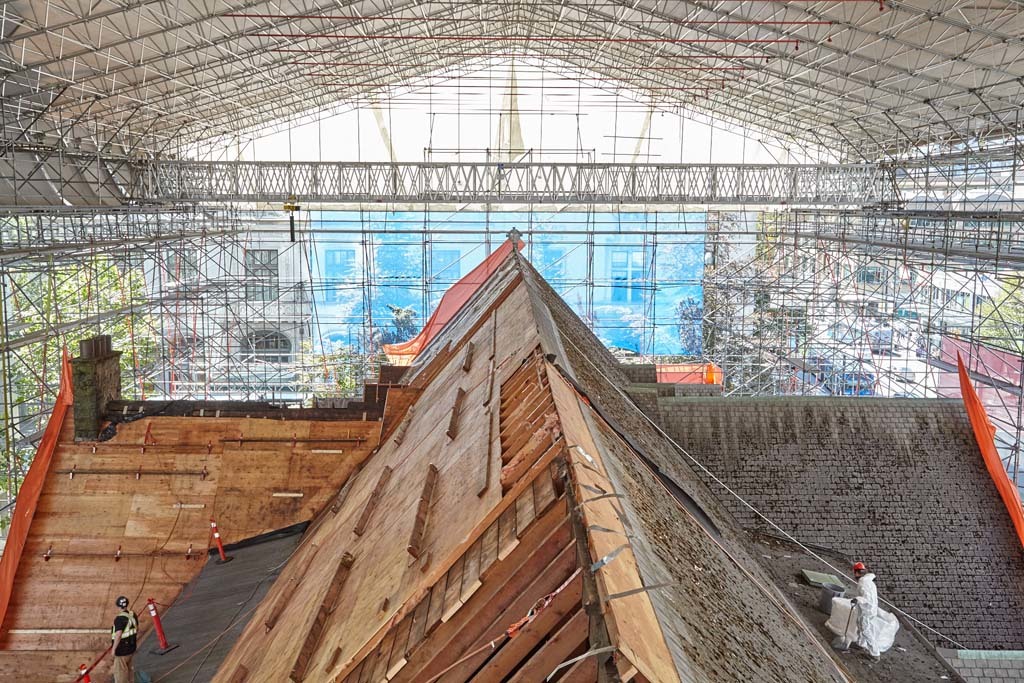 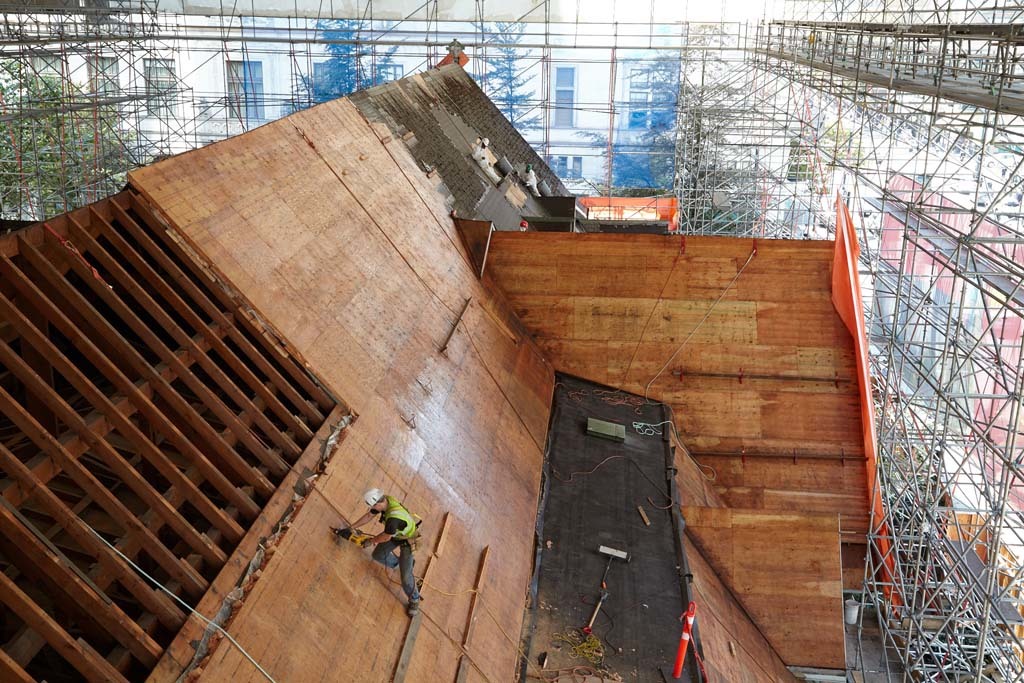 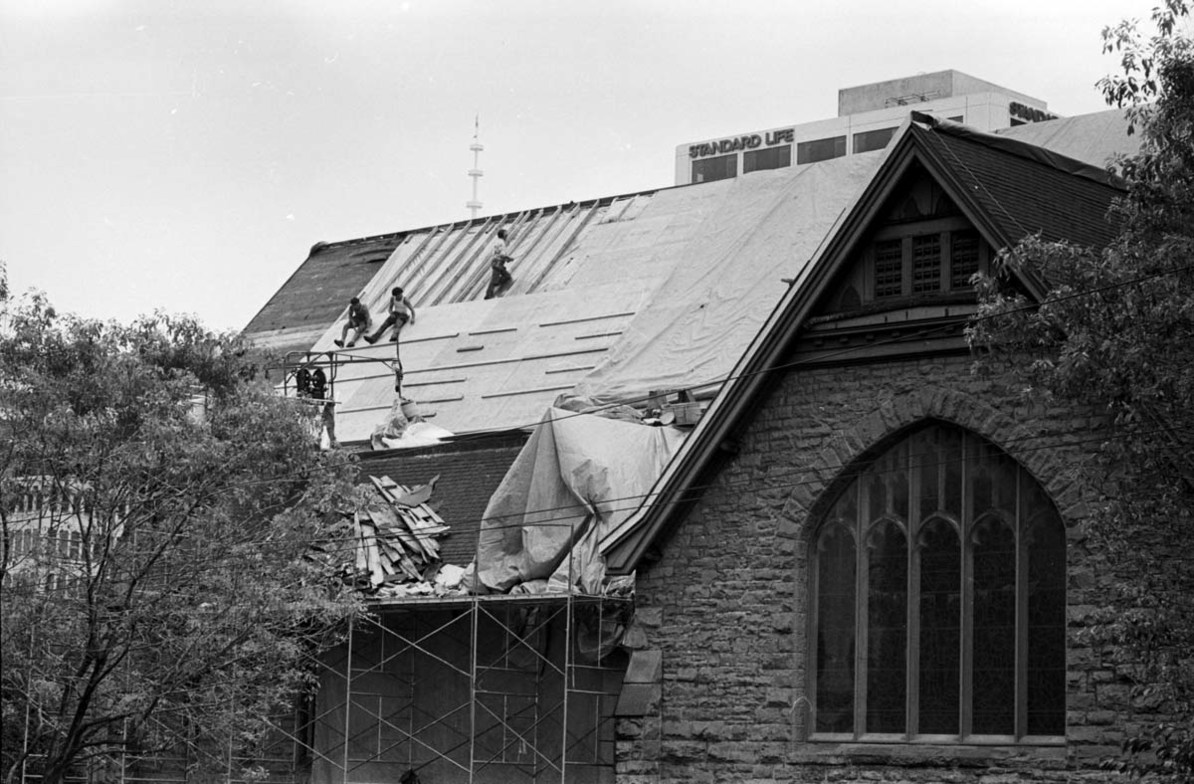 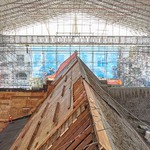 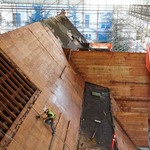 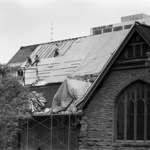 Passersby in downtown Vancouver cannot help but notice Christ Church Cathedral these days. The modest 1890s Gothic Revival-style church has almost doubled its footprint, as the building is surrounded on all sides by enormous scaffolding. It has inflated skyward as well with a huge canopy of tarps creating a temporary roof suspended above the actual church roof. All of this is to enable workers to re-roof and seismically stabilize the building, enlarge the kitchen, and install a bell spire – in ways that are safe for workers and the heritage building.

Compare this scene with an image from the Vancouver Sun that Cathedral parishioner Lesley Godwin found in her personal archives. In August 1980, Sun photographer George Diack snapped a photo of the workers in action the last time the Cathedral was re-roofed. Simple scaffolding barely reached the eaves, a loose tarp flopped over part of the roof, and workers perched on the roof unsecured by safety harnesses. Nevertheless, they got that roof on, and it lasted 35 years.

This raises the question of whether today’s expensive and time-consuming precautions are really necessary. The Cathedral’s project team and WorkSafe BC believes that the answer is clearly “yes.”

The current elaborate scaffolding is essentially a means of keeping water out of the Cathedral when the old roof is removed. Given the parish’s deep investment in earlier renovations of the interior, this is a high priority for the Cathedral’s project team, led by Cathedral architect-in-residence, Allen Aubert; project co-chair for construction, Ian Birtwell; project co-chair for finance, Gary Kenwood; and team members, Graham Rawlings, John Ross, and Dean Peter Elliott.

Scaffold company, Matakana installed its proprietary system that allows the span of very long distances. The scaffolding wall height, to above the roof peak, is necessary to permit use of a travelling gantry crane for moving materials to all areas of the roof, as loading access is limited to one location in the lane. For the scaffold canopy, 34m long lattice girders meet in the middle as rafters to create a roof-like structure above the actual roof. Then the structure was covered with tarp material made into a kind of reverse Roman blinds. Workers on one side of the Cathedral fed 10’ wide sections of tarp into channels while workers on the other side of the Cathedral slowly “drew the blinds”, pulling the 35’ long tarp sections snugly into place. They did this 19 times to cover the entire Cathedral. The rain barrier was extended by shrink wrapping on the sides of the scaffolding from the top down to below the eaves.

If the weather turns extremely bad with winds above 70 km/hour, the tarp-and-scaffold structure can turn into a giant sail and become a hazard in itself. If that happens, the tarp “blinds” will have to be pulled back, and Scott Construction project manager Simon Down says “secondary controls” will be put in place – old-fashioned tarps like those used in 1980.

Unlike the work in 1980, which was limited to re-roofing only, the current project also is committed to improving the seismic stability of the Cathedral and installing fire sprinklers in the Chancel area, both which can be done most efficiently when the roof is already off.

The drive to create greater earthquake resistance required workers to undertake the riskiest, dirtiest part of re-roofing the Cathedral: they connected the new roof to the existing walls, locking in place the new plywood and steel roof structure to create greater earthquake resistance. To do this, MacLeod Masonry of Sechelt brought in a specialist driller (he is currently working on the Parliament Hill buildings) who placed a proprietary drilling rig on the roof and drilled down into the Cathedral’s walls in nine locations.

The walls are made of two layers of stone sandwiching rubble (a mixture of stones and mortar) in between. The driller used a hollow pipe with a diamond drill bit to drill through the rubble stone layer. To avoid water leak problems inside the Cathedral’s old walls, he drilled dry, without the advantage of water to lubricate and cool the bit. The master driller turned the handle on the drill by hand, sensing changes in the rubble mixture as he went, and therefore when to apply more pressure and when to go slow. The driller worked in two foot increments, adding two foot lengths to the drill until it eventually penetrated from the top of the walls down about 30 feet into the Cathedral’s foundation. Then he inserted a dywidag anchor rod down the hollow drill stem. The rod is a steel anchor inside a fabric sock. Once the rod was in place and the drill stem removed, grout was pumped into and through the sock to expand it, fill any cracks in the rubble, and hold the rod securely, tying the new roof to the foundation and walls.

In the course of the project, workers have encountered hazardous materials, reminders that Vancouver used to be a dirtier, more dangerous place. The previous roof tiles and the felt layers underneath both contained asbestos, so the roofers donned full HazMat gear while removing and disposing of them. The layer of plywood underneath was dirty and contaminated by lead dust. The lead dust was thickest near the eaves where small openings allow for ventilation under the roof, and the contaminants diminished farther away from the ventilation openings. The surmise is that it is dirt from street traffic and lead from leaded gasoline, phased out from the 1970s to about 1990. Following Worksafe BC guidelines, the roofers are removing the lead-contaminated wood layers and lead dust. Wearing HazMat gear, they will hepa-vacuum the plywood to remove loose dirt and dust. Then they will spray the plywood with a glue-like coating to seal in any remaining contaminants.

Some paint on the Cathedral was also found to contain unacceptable levels of lead, including the main exterior doors. Unexpectedly, the paint on the Park Room’s (the gathering space located on the lower level, north facing with many windows looking out on the neighbouring Park Place property) door frames also registered above the acceptable lead limit – albeit just barely above. The Park Room woodwork was last painted only 15 years ago, and even in that short time paint standards have become much more stringent. The expense and time to safely clean these surfaces was added to the project’s to-do list.

Committed to being good stewards of its heritage building, the project team has adjusted the schedule to allow for safe, thorough work. Roof work will continue through March/April 2016, and only then will workers be able to work on installing the bell spire, with final assembly likely in June 2016. The kitchen expansion is generally on schedule with completion planned for mid-September.

Staff can return to the building and the parish can return to using the sanctuary on Sundays when high dust levels are no longer a problem, which, at press time, seemed likely by early November. Meanwhile the Century Plaza Hotel’s Burrard Ballroom has been booked as alternate worship space. All are welcome to join the parish for worship there during this pilgrim season away from its Cathedral home.

To find out more about the Raise the Roof, Ring the Bells, Feed the Hungry campaign and project, please visit http://raisetheroof.thecathedral.ca/ or contact Emily Pritchard, Director of Stewardship and Capital Development at Christ Church Cathedral by telephone at 604-682-6545.

1. Facing south prior to the removal of the west facing shingles. PHOTO: Martin Knowles, MKPhotomedia.com

2. Work on the west side of the roof. PHOTO: Martin Knowles, MKPhotomedia.com

3. The 1980 roofers. PHOTO: George Diack , Courtesy of the Vancouver Sun