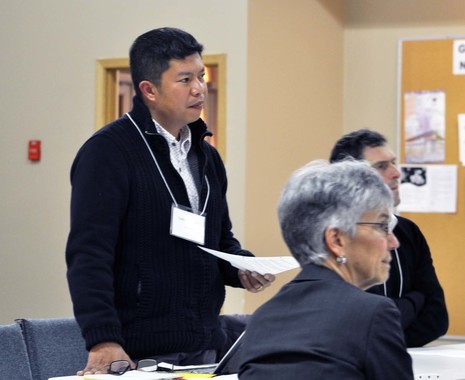 In preparation for the forthcoming Diocesan Synod, being held on May 22nd and 23rd at the Italian Cultural Centre, the Nominations Committee has issued a call for nominations for positions which will be elected this year, along with an introduction to the various roles.

Nominations are being sought for:

The Treasurer is a member of Diocesan Council, serves as Chair of the Standing Committee on Management, Property, & Financial Oversight and of two of its sub-committees. Regular meetings include one evening and one late afternoon meeting each month, and additional meetings from time to time. One person is elected for a two-year term.

Archdeaconry Representatives (Clergy and Lay) are elected for two year terms as members of Diocesan Council (the Executive Committee of Diocesan Synod) and, with the Bishop, Chancellor, Treasurer, Registrar (or Legal Assessor), are responsible for governing the diocese between Synods.  Diocesan Council meets six times a year or at the call of the Bishop.

Two youth representatives to be elected to serve a two-year term. Nominees must be between the ages of 15 and 25 years old on May 22, 2015. Diocesan Council meets six times per year or at the call of the Bishop.

The Board of Discipline   (3 priests and 3 lay persons)

A total of six members of the Board of Discipline to be elected to serve a two-year term. The Board is at the call of the Diocesan Bishop or Commissary. Lay nominees must be at least 26 years old and communicant members of the diocese for at least the last three years; and Priests must be ordained for at least 10 years or have served in this diocese at least two years.

The Bishop’s Advisory Committee on Appointments advises the Bishop about appointments and assignments in the diocese. Meetings are called by the Bishop when a short-list of applicants for a vacant position has been assembled, so they vary.  Four people are to be elected for a two-year term

Two people to be elected: 1 Lay and 1 Clergy for a two-year term. Attendance for minute-taking is required at all Synods.

Two people to be elected: 1 Lay and 1 Clergy to administer bequeathed funds for the needs of the people of the diocese.  AIF meetings are quarterly at the Synod Office.

Provincial Synod Delegates (Clergy and Lay) are elected to represent the Diocese at the Synod of the Ecclesiastical Province of BC and Yukon. This is a tri-annual meeting of five dioceses (New Westminster, British Columbia, Kootenay, Caledonia, Kootenay) and the Anglican Parishes of the Central Interior [APCI]. This is a tri-annual meeting which deals with various issues relevant to the Anglican Church in our region.  Five delegates, plus alternates, to be elected to attend the three-day Synod taking place at Sorrento Centre from September 18 – 20, 2015. Travel and accommodation expenses are reimbursed. Meals are provided.  Alternate delegates would only attend if a delegate cannot fulfill their responsibility.

General Synod Delegates (Clergy, Lay and Youth) represent the Diocese at the meeting of General Synod that is held somewhere in Canada every third year for seven days (including travel). It next meets in Toronto July 7-13, 2016. General Synod deals with substantive theological and policy issues and financial matters of concern to Anglicans across Canada. Delegates’ expenses for travel, accommodation and meals are paid by General Synod. Eleven delegates, plus alternates, to be elected.  Alternates attend the meetings only if delegates are unable to fulfill their responsibilities. Youth nominees must be between the ages of 16 and 25 years old on July 7, 2016.

Individuals seeking election to these roles must be nominated by a member of Synod, but they do not need to be members of Synod themselves.

In their letter calling for nominations, the Committee also notes that: "Our hope is to have our diocese’s many forms of diversity reflected in its leadership, and to have a robust list of candidates from which to choose. We encourage you to consider especially those who have the necessary gifts but may not yet have had the chance to serve in a diocesan capacity... We invite parish clergy to meet with their Church Committee and to look within their parish to identify suitable nominees for this ministry in our diocese. Note that the nominee is required to consent to the nomination in writing."

One of the mandates of the Nominations Committee is to ensure that the list of nominees represents the diversity of the diocese, so please don't be shy if you've never done something like this before.

The Synod 2015 page is being regularly updated with information and updates about this year's Synod. The Synod Circular, complete with financial reports, is now available to download and contains the up-to-date list of nominations received so far.