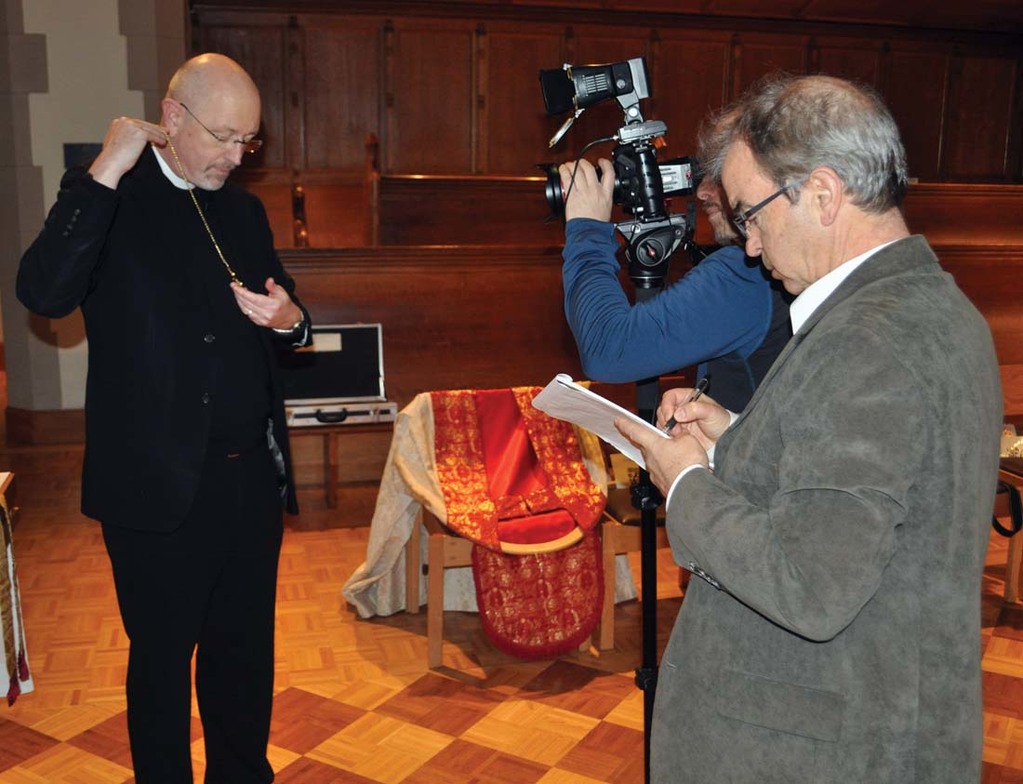 On Friday afternoon February 21st, noted Vancouver author and journalist Douglas Todd and Vancouver Sun Video Editor, Francis Georgian interviewed the Very Reverend Peter Elliott, Dean of Christ Church Cathedral and currently Administrator of the Diocese about the various Symbols of Ministry and Authority that will be presented to our Bishop-Elect, Melissa Skelton following her Ordination and Installation on March 1st, 2014.

For nearly an hour, Dean Elliott explained the significance, symbolism and history of: the Episcopal ring of the diocese, the pectoral cross, the crosier (pastoral staff), mitres, copes and the Communion set that will be part of the March 1st Ordination Eucharist to be held in East Hall C of the Vancouver Convention Centre (under the sails), at 1pm on March 1st.

The plan is for Douglas Todd to offer a brief article accompanied by some photographs in the Friday, February 28th issue of the Vancouver Sun along with an edited version of the video interview on the Vancouver Sun website. In the Saturday, March 1st issue of the Sun, the plan is to publish a profile of Bishop-Elect, Melissa Skelton. Now the world of daily major market news is always subject to drastic change depending on what else is going on in the world so there are no guarantees that these articles will make it to print but regardless of the outcome we are very grateful for the Vancouver Sun’s interest in this historic event in the life of the Diocese of New Westminster.


Image: Dean Peter Elliott displays and explains the significance of the Pectoral Cross of the Bishop of the Diocese of New Westminster. Douglas Todd takes notes as Francis Georgian films the interview.