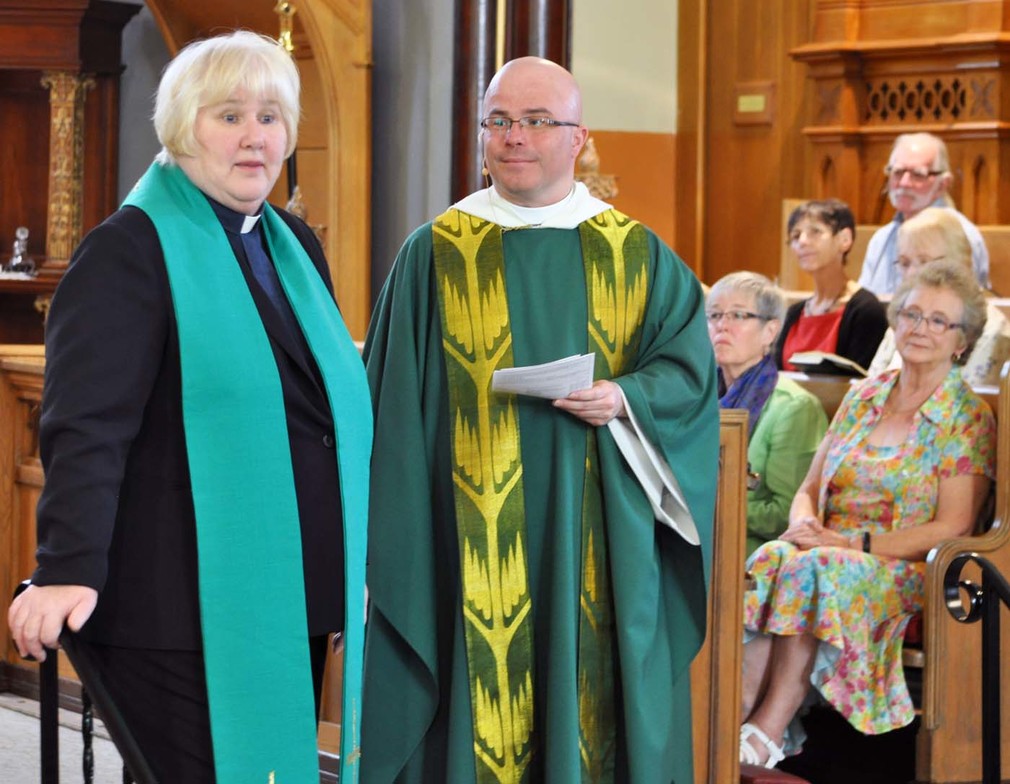 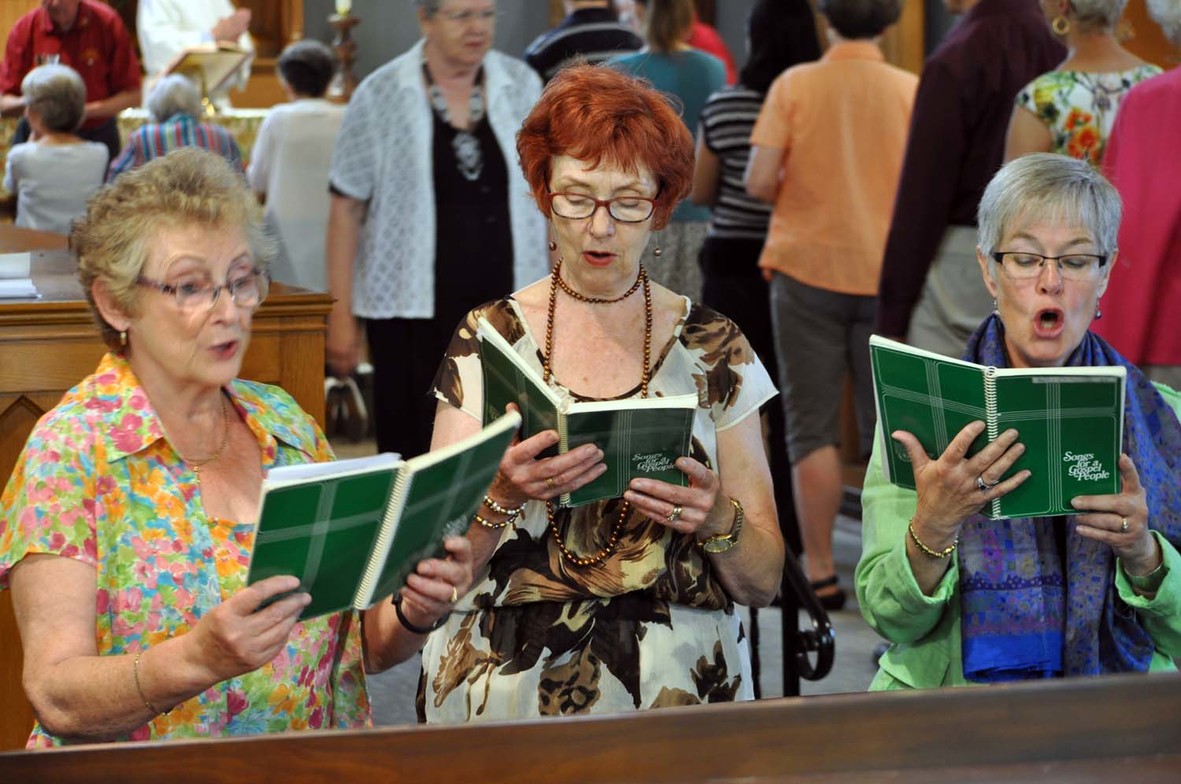 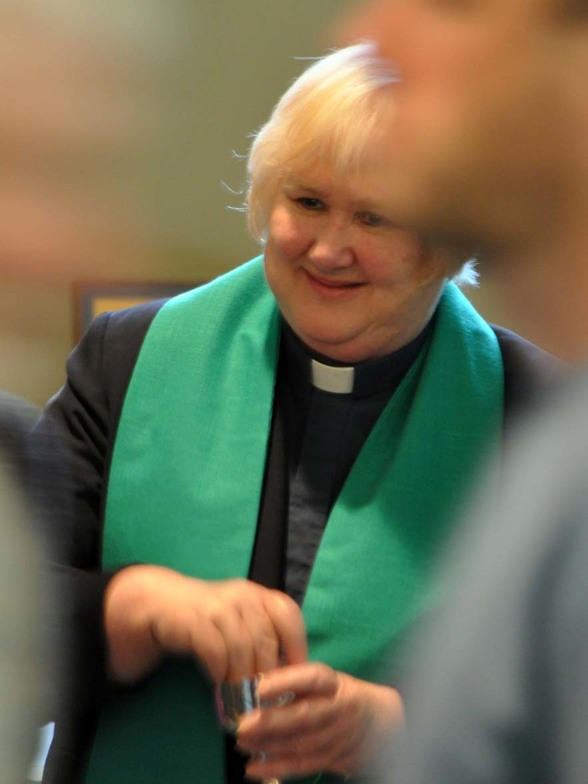 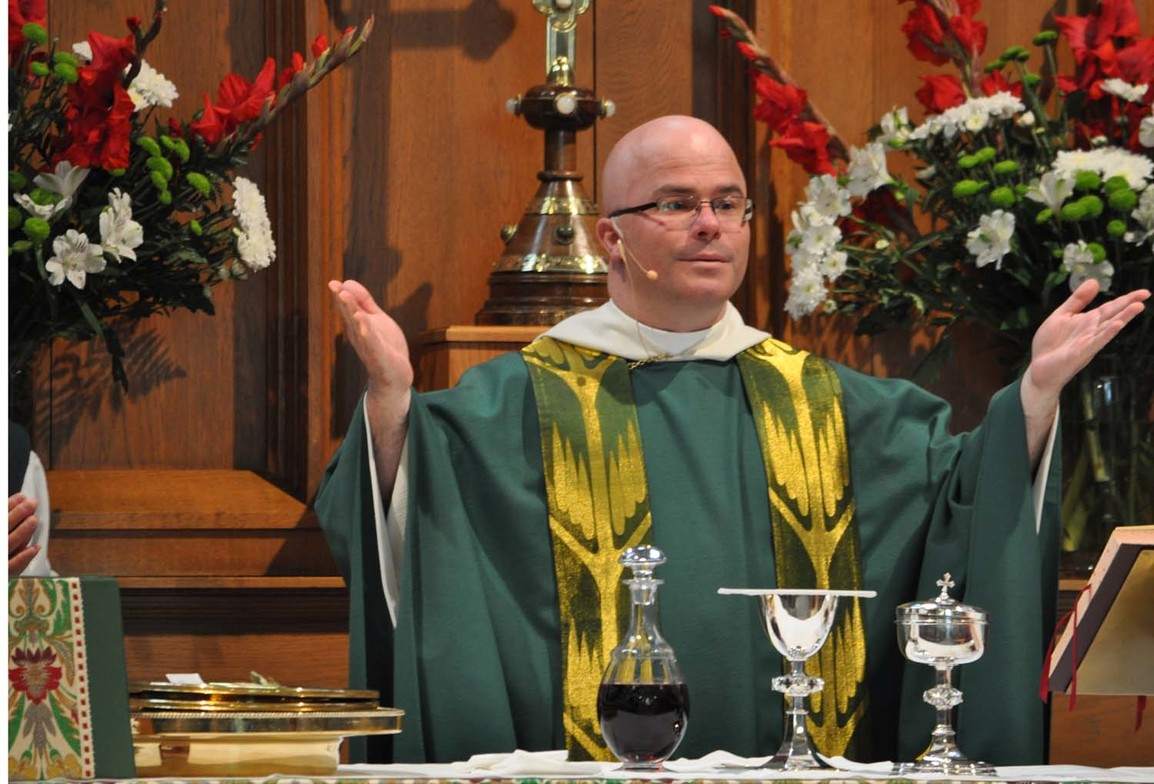 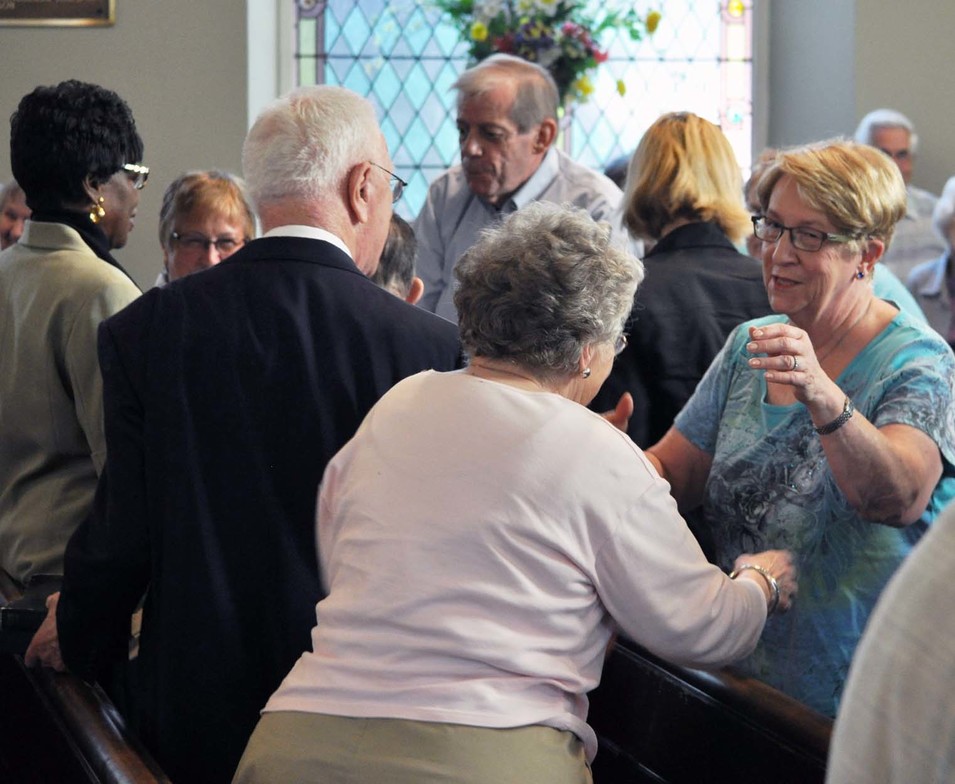 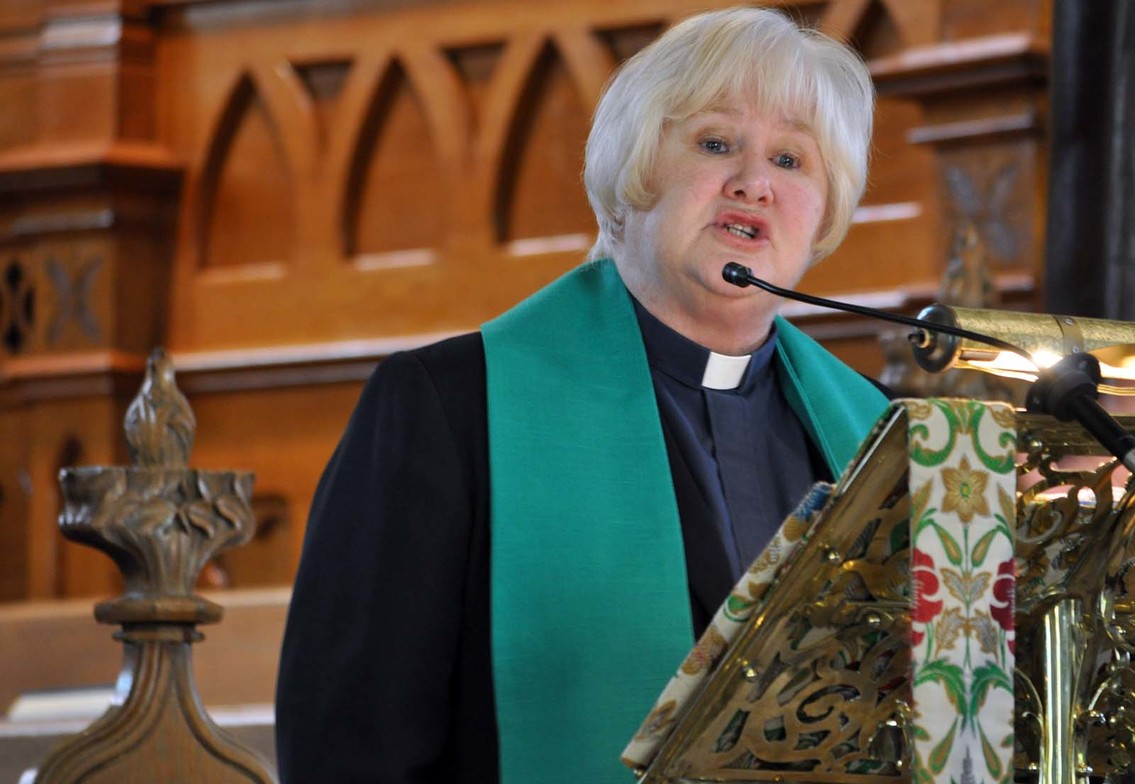 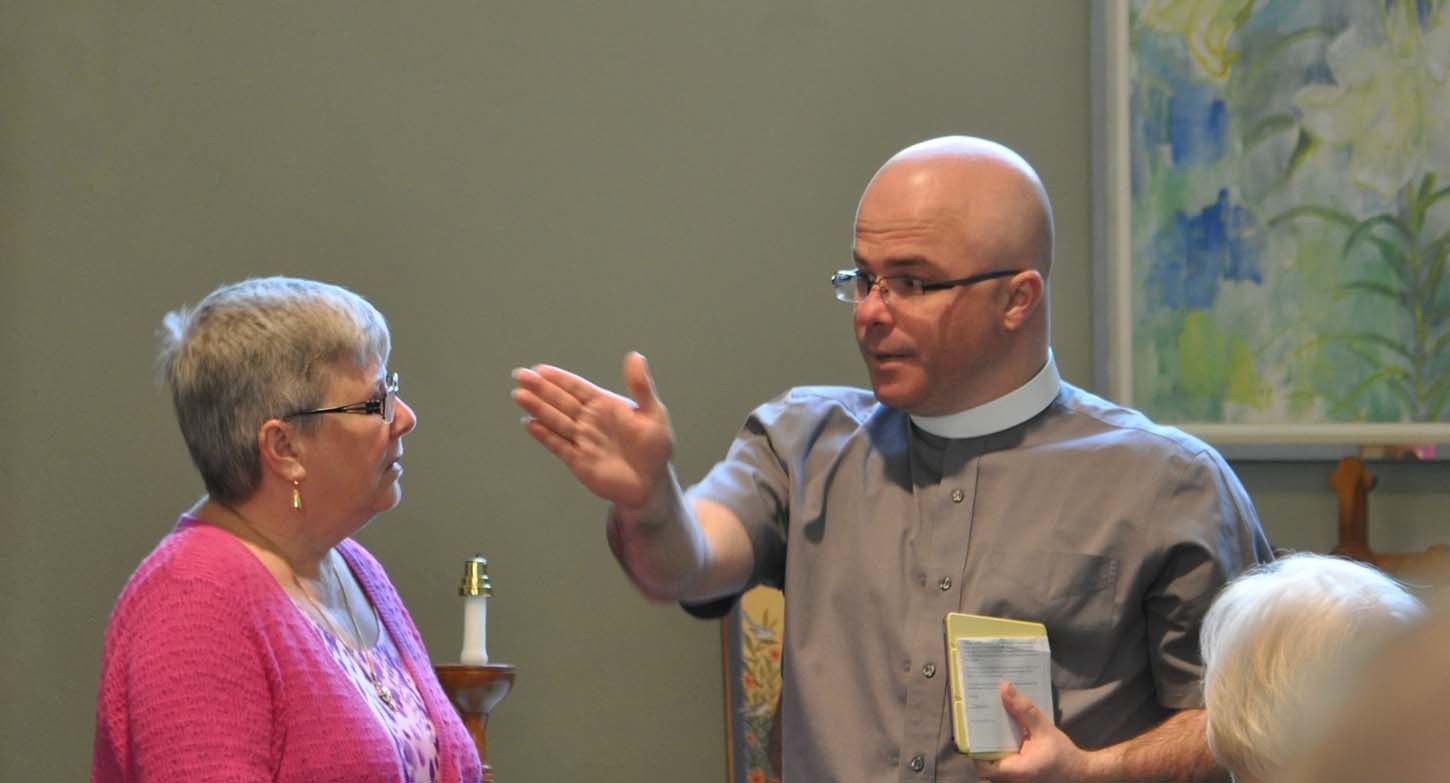 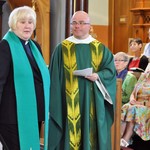 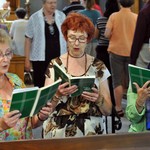 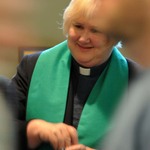 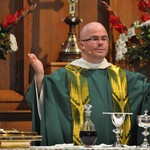 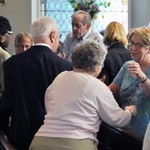 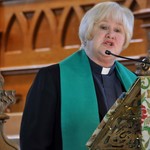 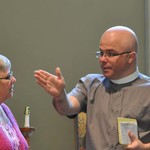 On June 11, 2015, a two alarm blaze broke out in the rector's office in the circa 1907 St. Alban the Martyr Church in Burnaby. Approximately $300,000 damage was done and it will be 3 months before the sanctuary is renovated and completely accessible. Hopefully the restoration process will be far enough along that the parish may begin gathering soon in the hall for worship. But they did have a place to worship on June 14th as the Parish of Holy Trinity Cathedral welcomed the St. Alban's congregation for the main 10am Eucharist for Pentecost III.

Following the procession and the opening hymn, Holy Trinity Cathedral’s (HTC) rector, the Rev. Dale Yardy welcomed the expanded congregation saying, “Good Morning HTC and St Alban’s! What a week it has been. We are the Church of God together, and we GATHER TOGETHER!”

The host rector, Rev. Yardy took on the role of celebrant and the guest rector, St. Alban’s, the Rev. Faun Harriman was the preacher. Faun’s first duty was to gather the children of both parishes at the chancel entrance for a story. She chose the Gospel for the day, Mark 4:26-34, the parable of the Mustard Seed. She began by asking if anyone liked Hot Dogs? That question brought on a number of enthusiastic ‘YES’” and hands were raised in the air. Then she asked “What do you like to put on your Hot Dogs?” Now this proved a little more difficult as there were many answers of “ketchup” (an answer which is normally met with disapproval by fans of the savoury cylinders). Faun kept prompting the youngsters which eventually produced the answer “pickles”, not what she was hoping for, however the word mustard soon emerged and Faun was able to proceed with the story. At the conclusion of her explanation of the well-known parable she said, “We had a fire, so we are coming here to be with you and you are going to love us. There is lots of love here today.”

For her homily, the Rev. Harriman selected the Old Testament reading, 1 Samuel 15: 34-16:13. She began by asking if anyone in the congregation was familiar with the schoolyard ritual of choosing up sides. She pointed out that the criteria for people to be chosen first usually had to do with outward appearances. She unpacked this further making references to the shallow nature of popular reality TV shows. In her message she said, “"God sees possibilities that others don't, for we confuse appearance with God's reality. People look at the outward appearance, God looks at the Heart...personality is what people choose to show others, character is who we are when we are alone. When God makes the choice…God is seeing what we miss.”

Because the regular HTC Sunday attendance had almost doubled with the arrival of the Parish of St. Alban the Martyr on June 14, there were two Communion stations. The Reverend Dale Yardy and the HTC Sanctuary Party administered from the altar in the chancel and the Reverend Faun Harriman and worship leaders from St. Alban’s administered from in front of the chapel altar in the west alcove. During the Eucharist, the Choir of HTC under the leadership of director of music/organist George Ryan led the music with a number of selections from Songs For A Gospel People.

After the Eucharist and prior to the dismissal, Rev. Yardy and Rev. Harriman met together at the entrance to the chancel for a joint announcement session. Dale and Faun have worked together closely since Dale arrived in the deanery in 2013, and he revealed that they have shared numerous festive beverages made from grapes and eaten a few pizzas together in the last two years. Faun asked that the St. Alban’s community gather in a section of the HTC hall after worship for a briefing. Among other items she shared the news that she would be going to Toronto early in the week to officiate at the funeral of a beloved aunt and that as far as the church renos were concerned, the narthex floor may need to be completely replaced mostly due to water damage and all the pews have been moved out of the nave in order to erect scaffolding. The hope as of Sunday afternoon, June 14 was that the restoration process would be far enough along to allow the community to return to the church property for June 21.

Please keep the Reverend Faun Harriman and the Parish of St. Alban the Martyr, Burnaby in your prayers as they negotiate this difficult time in their history and many thanks go out to the hospitable and generous parishioners of HTC who were more than willing to share their space and their Sunday worship.