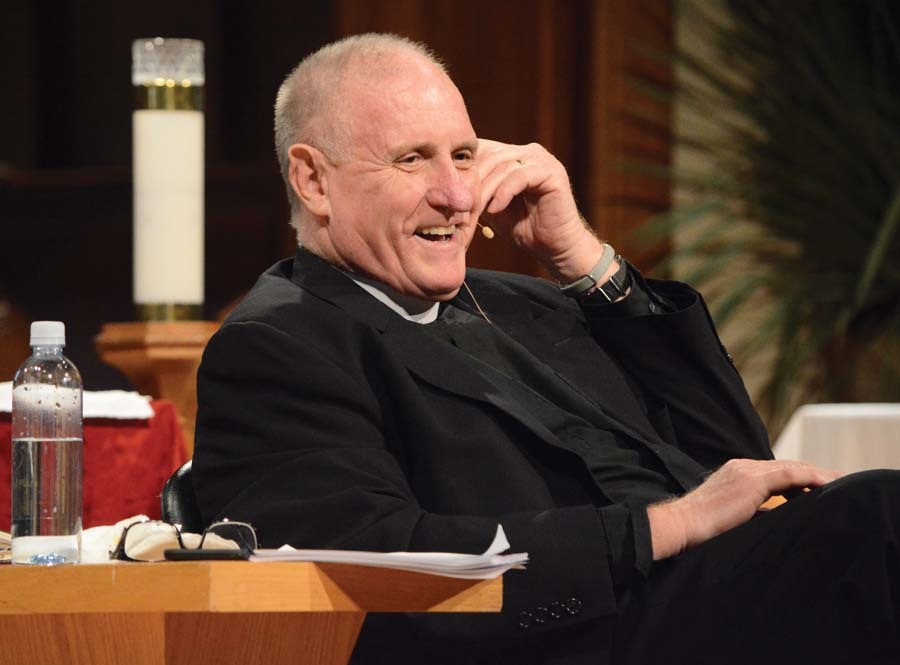 When the luncheon segment of the April 11 Chrism Mass was concluded and the dishes were being removed and the chancel cleaned, a goodly number of the clergy and lay who attended the liturgy remained behind in the nave to experience a 75 minute talk and conversation with the Reverend Canon Dr. Ed Bacon. Canon Bacon was the visiting preacher and presenter during Holy Week at the Cathedral and his topic for this additional speaking engagement was "The Ministry (or Vocation) of Oneness in Tribalistic (or Polarized) Times".

In this presentation which consisted mostly of an off the cuff address, the well-known Episcopal priest thoroughly explored “oneness in polarized times.” After presenting some history about himself and a brief sociological analysis of the current evolving situation in the U.S., Canon Bacon posed a rhetorical statement to the audience saying that... if you find yourself in a place or in a situation where the climate is adversarial and there are differing passionate opinions, you should “take your shoes off because you are on Holy Ground.” Out of conflict unity is born.

As a disciple of Thomas Merton, Canon Bacon sees the core concept of oneness through the teachings of Merton. “Salvation has to do with serving your true self…God created all the religions and Merton was the bridge…what we have to be is what we are…the deepest level of communicating is not communication, it is communion.” As a southerner whose family was and remains part of the southern reformed congregation branch of Christianity, he believes that the religion that the south is raised in is not the religion of Jesus. For unity and oneness to evolve we have to “bless the space between us…between you and someone who is your detractor.”

He said that Christians have a responsibility to not let themselves get burned out (as the majority of the audience members for this talk were diocesan clergy, hearing this message during Holy Week  was timely). He stressed that we “don’t do it for the results.” For Canon Bacon there are four elements of religion:

Don’t be attached to the results It is the reality of personal relationships that in the end “saves everything.”