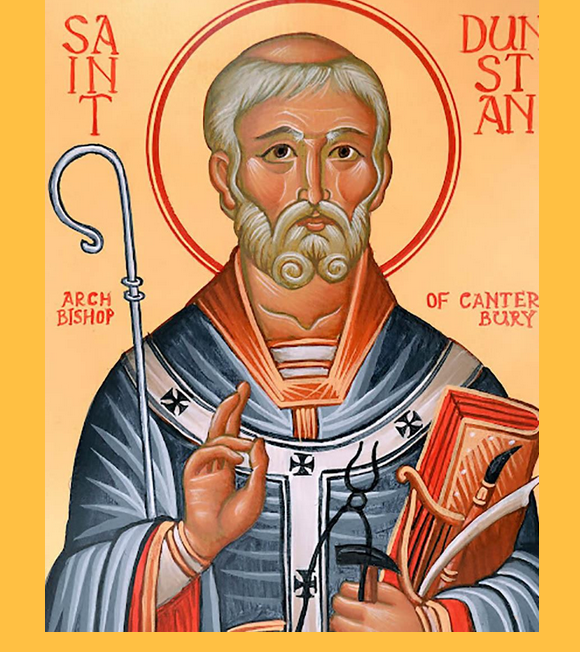 On May 19 we honour the memory of Dunstan, who was the greatest Archbishop of Canterbury in the century before the Norman Conquest.

Born into a powerful family, he entered the royal service as a youth and seemed to be on his way to a career of secular
power, when he quite suddenly took the vows of a monk and was ordained priest. He became a hermit in Glastonbury and devoted himself to prayer as well to crafts which beautified the liturgical life of the Church. He eventually became abbot of Glastonbury and over the next twenty years reformed its whole life, reviving a spirit of discipline among its monks and expanding its buildings.

Dunstan served as bishop of Worcester, then as bishop of London, before he was appointed archbishop of Canterbury in the year 960. In this office he extended his reform of monastic life over all of England, enriching the monastic liturgy and giving special prominence to the role of crafts in the life of each monastery. He also set about reforming the administration of the English church at large, to ensure a better standard of discipline among the parish-clergy. Towards the end of his life, he acquired a reputation for visions and miraculous powers. He died on May nineteenth, two days after Ascension Day, in the year 988.

On this day please remember in the Diocese of New Westminster, the members of the Parish of St. Dunstan, Aldergrove, and the Rector, the Reverend David Taylor.