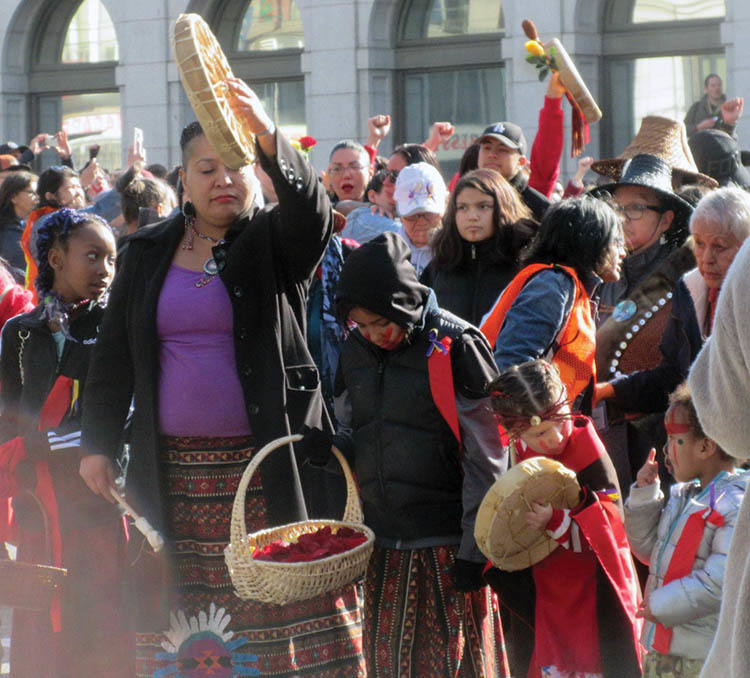 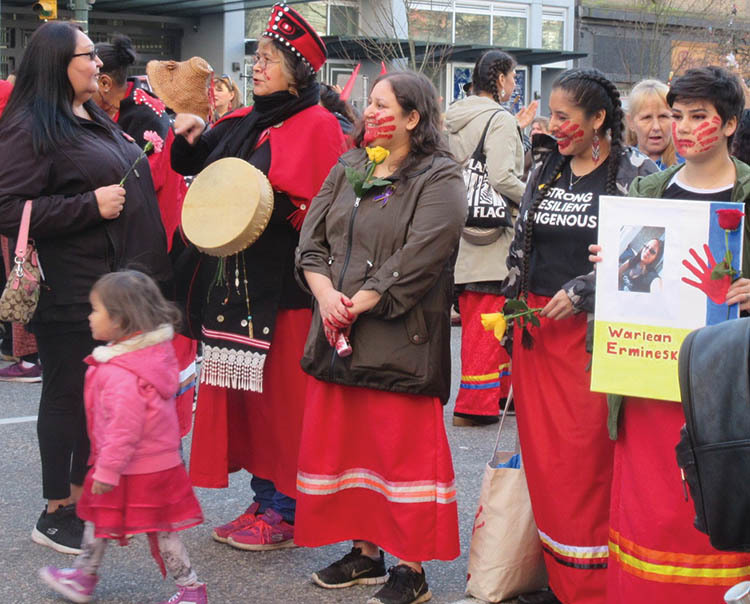 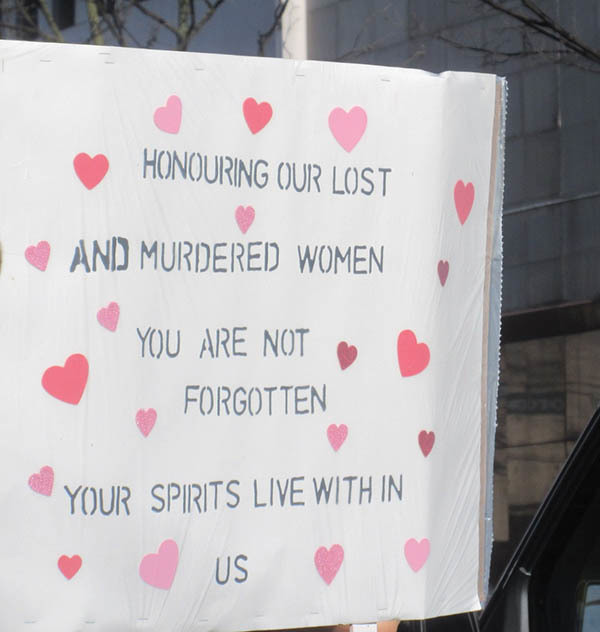 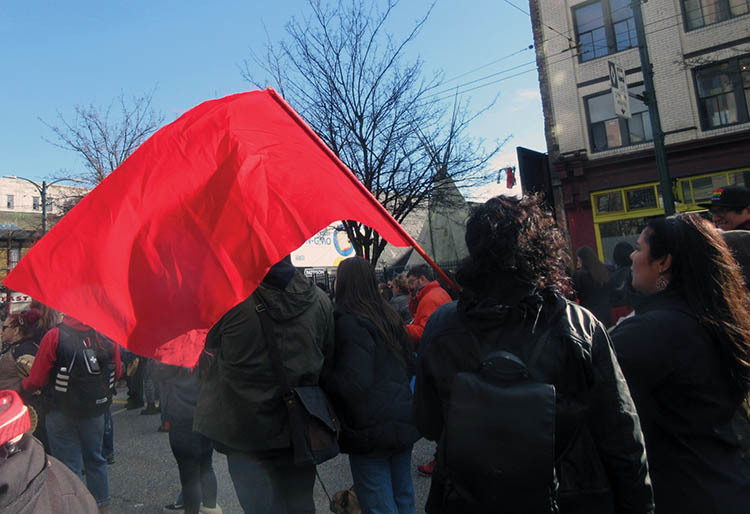 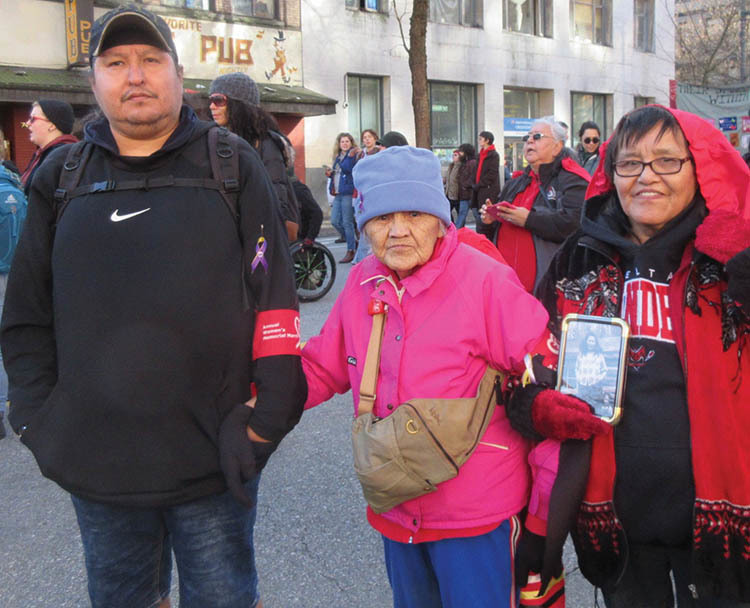 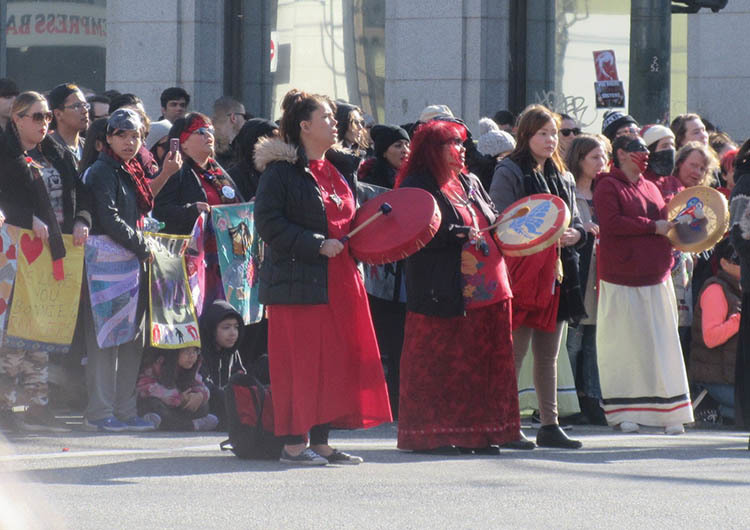 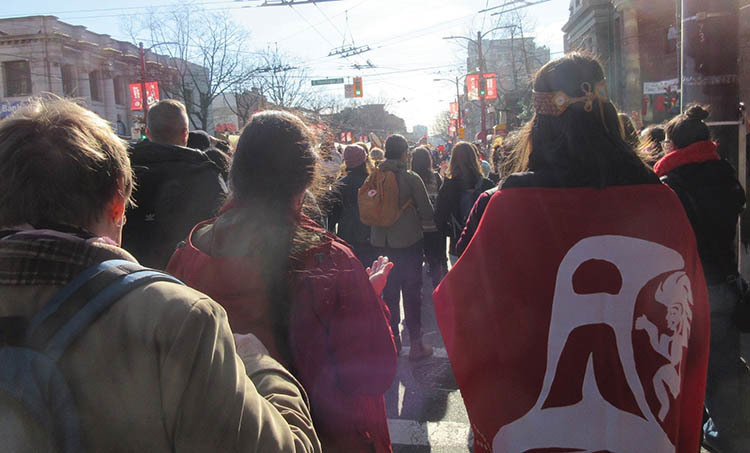 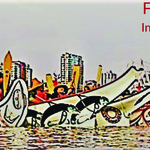 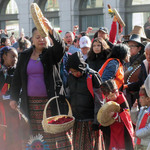 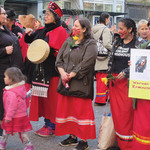 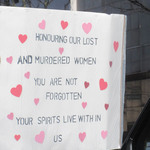 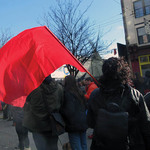 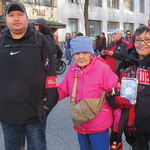 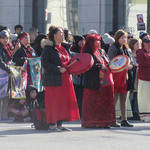 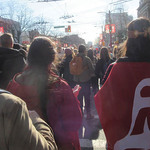 The Missing & Murdered Indigenous Women & Girls (MMIWG) Valentine's Day March always begins with the participants gathering at the corner of Main and Hastings on the Downtown Eastside (DTeS) and walking through that neighbourhood.  February 14, 2020 was a beautiful sunny day for honouring the women, girls and LGBTQ2S people who have left us too soon. We were also blessed by an Eagle flying over us as we marched through the streets.

Beginning in 1986, my spouse Linda and I worked at the Downtown Eastside Youth Activities Society (DEYAS) for many years.  DEYAS provided outreach programs to those on the streets, particularly youth, and we got to know the women who were out there, watching with sadness as many of them were lost.  Some women were very young, and we would see them come into the community all bright-eyed and looking like they could conquer the world.  But it didn’t take long for that look to disappear as the horrors of sexual exploitation by male predators combined with addictions took over their young spirits. It only took a matter of weeks for the loss of weight, and discolouration of their complexions to show. Too soon their innocent childhood was gone.

During my work in the Downtown Eastside community during the 1980’s and 1990’s, I saw many young girls and boys stop being kids and become lost souls. They had no business being on the streets and abused by predators, yet it happened on a daily basis. The older women working in the sex trade had genuine concern for them.  Like protective moms they tried to help those of us who were outreach workers get these kids removed from the streets.

In the 1970s and 80s, the laws had little to no affect protecting children that were at home or on the streets. As a social worker I did some things that by law were beyond my authority.  I recall one incident when I got a police officer to help me take a child who was trying to run away off a Greyhound bus.  Later the girl said to me – “You didn’t have any power to take me off that bus.”  I had to confess, that no, I didn’t have that power.  She smiled at me.  The police officer also questioned me about whether I had the power to do that.  I told him I did. He just looked at me knowingly… and smiled.

Once a judge asked me in Court why we didn’t have resources for one young girl who was on my case roster.  I bluntly told him that our region didn’t have the housing needed for her. He ordered my Regional Supervisor to come into Court the next day, and suddenly I had resources and a program for her. Yes, I had to lie, and often rock the boat, to help these kids get off the streets.

There were only a few children that I was really able to help in a big way. The truth is, I was not successful in getting many off the streets. Some of them, whom I knew personally, became missing persons. The remains of several were found on the farm of notorious serial killer Robert "Willie" Pickton. These children never belonged on the streets, nor should they have died.

At times they were funny, loving kids, but also scared and hurt human beings who wanted so much to belong somewhere.  When I walked the streets to see how they were doing, they always greeted me with kindness and care, and were very protective of me if a john was giving me a hard time.

Nobody wanted them or cared for them until they became dead women, dead girls and dead LGBTQ2S.  When Linda and I take part in the March each year, we remember them with tears in our eyes  - all the sad stories, the funny stories, and at times… some successes.

Here is a link to the Anglican Church of Canada for Prayers and ceremony resources for vigils for missing and murdered Indigenous women and girls.