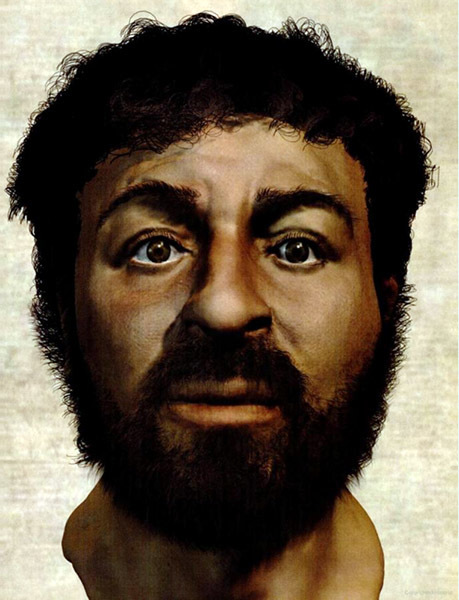 A few weeks ago in youth group we talked about how Jesus wasn’t white. Jesus was a Middle Eastern Jew, and forensic scientists have even done facial reconstruction of 2000-year-old skulls from Palestine in order to get a sense of what Jesus might have looked like. With olive skin, black hair, and large nose, this facial reconstruction looks nothing like the Jesus we typically see in art with long curly brown hair, white skin and blue eyes. Anthropologists have even debunked the notion that Jesus had long flowing locks – Jewish men of the day cropped their hair short.

Yet the image and myth persist. Megyn Kelly, then a Fox News reporter, in December 2013, made a stir by proclaiming on air that it is a fact that Jesus and Santa are white (in another case of whitewashing, St. Nicholas was from Turkey and was also not likely blond haired and blue eyed).

While you might be able to argue that renaissance painters were simply painting what they knew, this is no longer a valid excuse. Yet finding Christian children’s books, nativity sets, or Christian art with representations of Jesus not as white is difficult. Hardly any kid’s books have illustrations with a non-white Jesus. Many portray all the biblical characters as white, but even worse, some portray Jesus and the disciples as white, while Pilate, Herod, and “the Jews” who called for Jesus’ death as shown as distinctly darker-skinned. These ones I’ve removed from our children’s book collection because of the implicit biases they teach. However, if I removed all the books with a white cast of characters, I would have very few books left. For this reason, at youth group we began to fix this problem with pencil crayons and markers.

I do not have space here to get into the myriad of ways that racism and white supremacy are pervasive in our society today, and the many reasons that those of you who, like me, are white, should care. Many a book is written on the topic. But there are many reasons that we as Christians should be concerned.

Robyn Whitaker, a senior lecturer in Biblical Studies, wrote an article entitled” “Jesus Wasn’t White” in theconversation.com, and gave the following challenge to us:

“What would our church and society look like if we just remembered that Jesus was brown? If we were confronted with the reality that the body hung on the cross was a brown body: one broken, tortured, and publicly executed by an oppressive regime. How might it change our attitudes if we could see that the unjust imprisonment, abuse, and execution of the historical Jesus has more in common with the experience of Indigenous Australians or asylum seekers than it does with those who hold power in the church and usually represent Christ? Perhaps most radical of all, I can’t help but wonder what might change if we were more mindful that the person Christians celebrate as God in the flesh and saviour of the entire world was not a white man, but a Middle Eastern Jew.”

So I invite you to image Jesus as brown, to challenge racism in both everyday interaction and systems when you see it, and to colour in kid's books.

A version of this piece originally appeared in the Cathedral notes for January 27th 2019.

The image used is from the Popular Mechanics article by Michael Fillon The Real Face Of Jesus
Advances in forensic science reveal the most famous face in history. Published January 23, 2015.