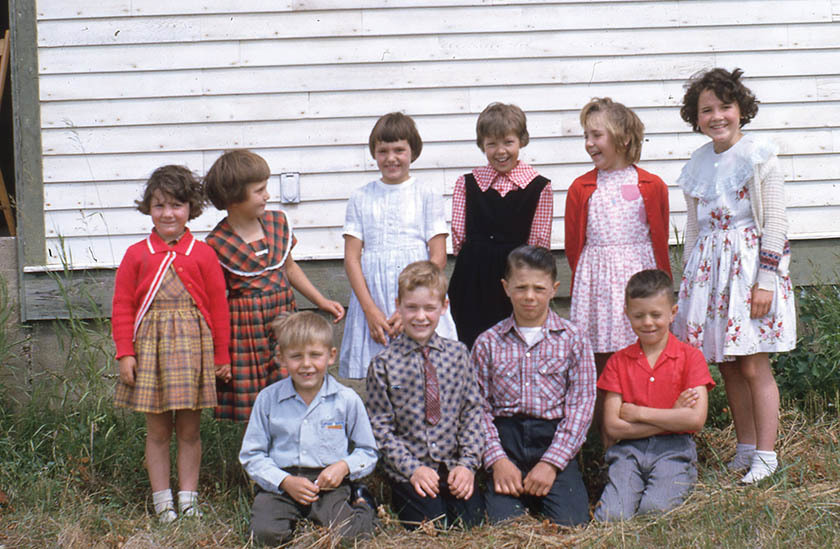 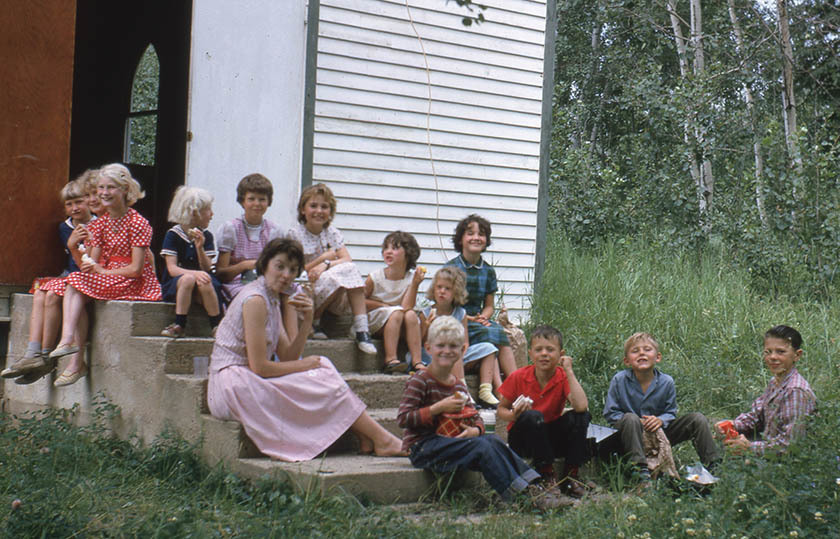 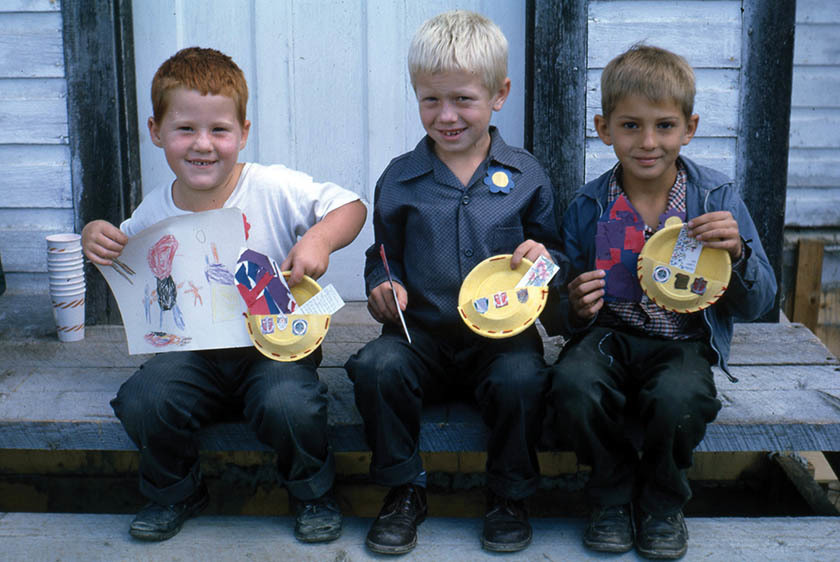 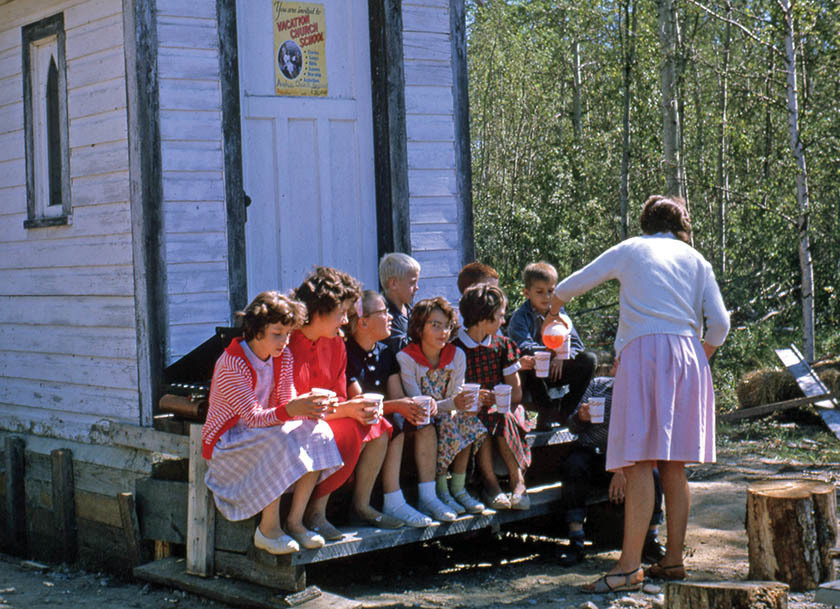 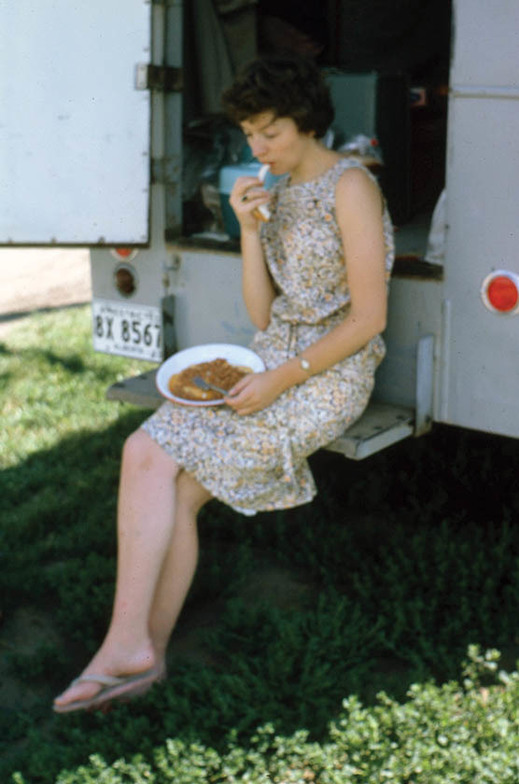 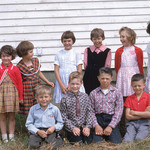 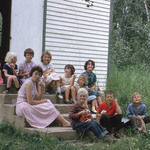 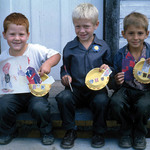 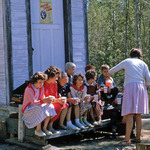 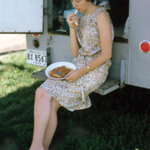 Dr. Mary Martin, a chiropractor, attended our church (All Saints Anglican) in Mission. One day, when treating my Dad she told him about Miss Hasell, who started the Canadian Sunday School Caravan Mission. She mentioned that Miss Hasell was looking for volunteers for that summer. Working in pairs, one would drive the caravan (a four wheel drive, two ton truck), while the other would take charge of teaching. She said to Dad, “Your daughters would be “perfect for the job”. Dad shared the idea with my sister, Joanne and me and it wasn’t long before I heard Joanne say, “If you look after the teaching, I’ll drive”. With that, the decision was made. In 1961, Joanne and I, both newly minted teachers at the ages of 20 and 22 respectively, agreed to spend the summer as van girls in Athabasca, Alberta. In June we met Miss Hasell in an old hotel in downtown Vancouver. She told us about the mission and our duties as volunteers. We understood that we would have guidance from the clergy regarding visiting and that we would lead vacation Bible schools and distribute Sunday School by Post materials. Joanne remembers Miss Hasell, looking at my feet and saying sternly but kindly, “Well, you won’t be wearing those shoes!” July came and we were on our way. Dad drove us to Matsqui where we caught the CN train to Edmonton. From there we went about 100 miles north by bus to Athabasca arriving at 9pm. We were met by the Rev. Ellis, rector of the Athabasca parish, the Rev. Stubbs, rector of Perryvale parish and Ken Patten, a divinity student from Nova Scotia. We stayed overnight at the Ellis’ home.

After a morning service, the Rev. Ellis took us to the van, which was in a garage at the rear of the rectory. When she saw the size of the vehicle, Joanne felt a little overwhelmed and figured I’d be “praying hard” as she drove. The van was well equipped with bedding, plates, cutlery, camp stove and cooking pans. We went on to the only grocery store (we were given money for food and fuel), where we bought canned and packaged food. We were commissioned on Sunday at church in Athabasca and felt somewhat reassured by the presence of John Clarke our former minister from Mission who just happened to be there with his wife, Georgina. After the service, we drove 20 miles south to Perryvale to the Rev. Stubb’s parish. As prearranged, we parked the van in a parishioner’s yard and met the Rev. Stubbs at the church. He provided us with the parish list, and gave some directions. Over the next six weeks, in covering each of the parishes, we drove on rough, relatively flat unpaved roads, in order to reach and teach children, to invite them to Vacation Bible School and to offer Sunday School by Post materials. In all we visited 80 homes. They were modest to very poor homes, some with families of 8, 10 and 12, children. The poorest was but a hut with a dirt floor and little furniture. A new baby lay on a bed shielded by a piece of cardboard under a single lightbulb. We were strongly affected by the poverty.  On the other hand, it was to our great advantage that many knew the van from previous years and looked forward to its arrival. We were warmly welcomed and often given food or invited for a meal.

We had the first of our four two-week long vacation bible schools in Perryvale from 10:30-12:00 each day for about 15 children with stories of Jesus, prayers, singing and crafts. The others were in Athabasca, in the village of Colinton and in a school building in Boyle. In each, the children were enthusiastic and very responsive. Except for a few fierce thunder storms, the weather was pleasant. Mosquitos were annoying, particularly at night in the van. However, we were lucky to have missed an influx of caterpillars which had moved in a wide swath, denuding the trees of their leaves and making the roads and all other surfaces hazardous. We saw large piles of dead caterpillars under the trees and leaves were just starting to grow back.

Long after our trip, I read several accounts about Miss Hasell. In England she had trained in church work, nursing and first aid and she drove an ambulance in WWI. After the war, in deciding to serve the children of settlers in Canada as a missionary, she made a remarkable plan! Having been left a legacy by her family, she used her resources (plus funds raised and given) to design and buy vans (29 in all over 50 years). She recruited women to volunteer their time to drive these vehicles (early on the driver had to take a course mechanics to qualify) and to teach in a diocese for a four month period. One hundred years ago, Miss Hasell and her partner were the first to come. From 1920 to 1970, she and all other vanners brought Christian teachings to western and northern Canada.  In supporting Anglican clergy, or filling in where none existed, and in reaching and teaching both adults and children, they fed early settlers hungry for spiritual support.

In one of her books, Canyons Cans and Caravans (1930) Miss Hasell writes in detail of her work. What a contrast to our experience! Driven by a passion for the church and children, Miss Hasell tells of herculean feats, which I think she was only able to accomplish with the help of the Holy Spirit. She and her long-time associate, Miss Sayles walked many miles on the vast prairies, up mountains and on unmarked trails through mud and mosquito ridden bushes to connect with remote homesteaders. During one four month period, Miss Hasell reported that they’d walked 406 miles, (hence her comment re my footwear). They drove through gumbo and rapidly flowing streams and on narrow mountain passes barely able to maneuver the hairpin curves. Miss Hasell was determined and indomitable. Life was rough but she and Miss Sayles were physically, mentally and spiritually strong enough to endure the hardships.

I had to file a report as did the teacher on each of the vans. Miss Hasell issued a summary of the work done throughout the country in 1961, the year we volunteered. Briefly, there were 29 vans and 58 workers, 1,133 children were enrolled in Sunday School by Post, 72 vacation schools held, 7,249 homes visited, 74, 772 miles driven, and 576miles walked. (We only walked three.)

In 1987, on a business trip with my husband, we went to church in Athabasca. I was taken aback when someone remembered me. Such an enduring memory is indicative of the impact of the van and vanners.

It was fitting that in May 27, 1969, Eva Hasell was honoured for services to religious education in becoming an officer of the Order of Canada presented by the then Governor General, Roland Michener.
The legacy Miss Hasell had received became ours. What a precious gift!

Joanne and I contributed to the children’s program in the diocese of New Westminster under Marilyn Fane. I taught Sunday School at St. Mary’s, Kerrisdale, Christ Church Cathedral, and St. “Bart’s”, Gibsons, Joanne attended the Anglican Women’s Training College in Toronto, inspired by that summer and is currently a member of ACW and St John’s, Port Moody. Both of us taught for the Vancouver School Board. I wrote two books about my teaching. Honouring the Child  and  Honouring the Child II for parents and teachers (www.honouringthechild.com)