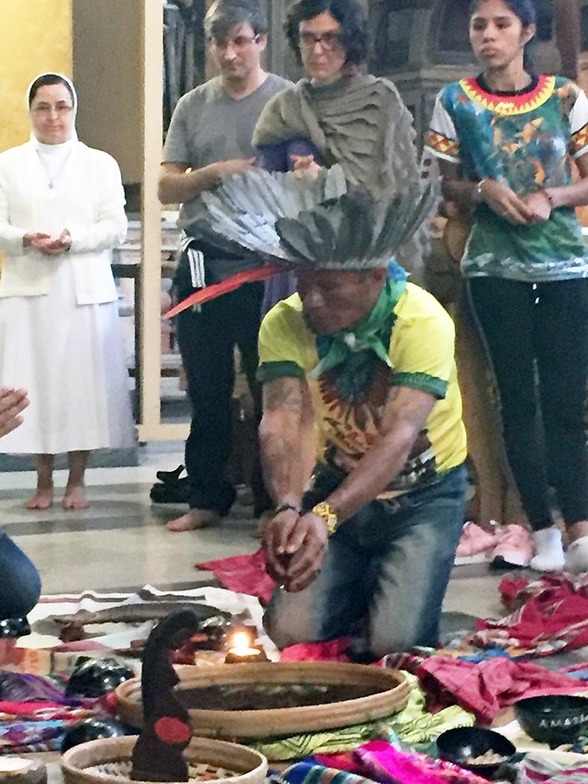 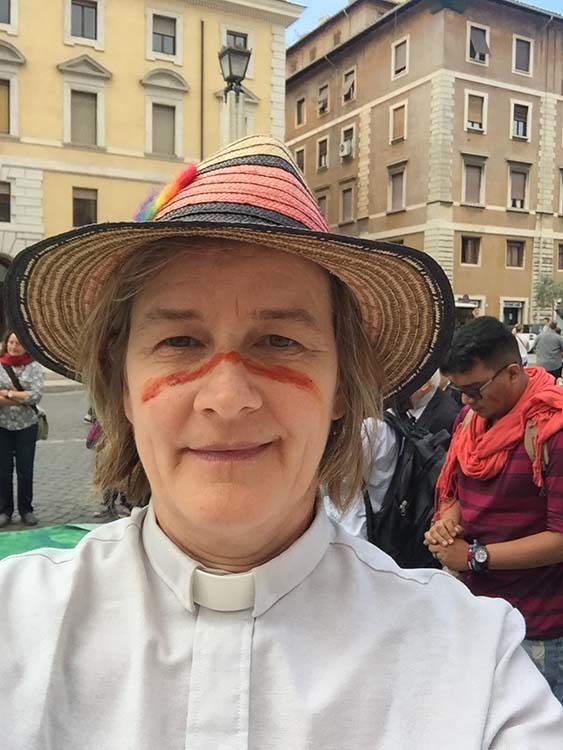 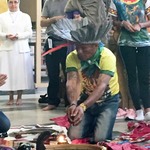 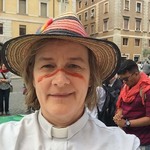 Pentecost is happening. Right here, right now. The whirl of the wind is audible, the fire is crackling, the people are listening, singing, dancing. The Spirit is moving among us, and revealing things that have never been seen before.

It has been impossible to write about, as I stand in the middle of this river, a river that has jumped the great ocean, and poured right into Rome, flooding the centre of Christian Power and Might. The people of the river, of the forest, in their deep ancestral wisdom, in their knowing of holiness, are inviting nothing less than the rebirth of the Church.

Can we even remember a church that had bare feet? The first believers trembled with possibility seeing the lame dance, the shunned embraced. What did it mean in those early days that no one would be left outside the circle of community and love? And what happened since to that story of love?

Can the historic layers of sin and pride, power and destruction be peeled back? As the Church grew grander and grander the Way was buried under a mountain of carved stones. Stolen, melted-down gold from Abya Yala was brought back over the ocean, then hammered into the ceiling of this very church. The peoples of Abya Yala were slaughtered, enslaved and, finally, forgotten.

But in every generation there have been faithful men and women who understood that saying yes to the Way would be a commitment to love, to the radical truth of the value of every human being, and they were witnesses to the stupid love of money. Like il Povorello, St. Francis, who danced with joy, preached to the birds, loved the wolf, and called all Creation his family.

“Jesus did not come to bring a gentle evening breeze, but to light a fire on the earth,” said Pope Francis in his homily on October 6 to launch the Special Synod on the Amazonia. These words were directed specifically to the Bishops --those who would be attending the Synod. Bishops -- demands Pope Francis -- must end their own reign as princes of the church and become once again servants, listeners, using their power to protect and nourish their communities. And all of us must embrace our faith as something powerful and active in the
face of so much mindless greed and devastation. No place for hopelessness or inaction.

None of us, the baptized, are to believe that our faith grants us any kind of privilege. Rather, we are called to throw all accumulation of wealth, power, status aside, and embrace the earth, and care for one another. That’s what Jesus did, after all.

In the preparatory document for the Synod, Instrumentum Laboris, the church apologizes for its participation in the actions of the conquest -- and says no, not again. This Synod is a no-holds-barred confrontation with a mercantile cosmovision which views the earth as a piñata -grab bag for the piling up of
goodies -- animals, plants, people be damned.

“Our land is ruined. It would be like as if someone dropped a bomb on the Vatican,” said Franciscan brother Joao Messias Souse, companion to communities flooded and destroyed by massive hydro-electric dams in Brazil.

Every morning for the past four days I have taken the long route, walking for about 45 minutes along the Tiber River, to arrive at the Casa Comun Amazonia, held in the Santa Maria Traspontina Church, down the causeway from St. Peter’s. Here the people -- companions to those in the Synod -- rest and gather, share and strategize. Here we wait for news, engage in passionate conversation, and make plans for further connecting. Guests are invited to come -- not to bring our own agendas -- but to listen.

Mostly, we sing, dance and pray. There is a certain way we sing and pray, standing, moving, embracing one another, swaying together, breathing together. That is when the wind comes down, and the Spirit whirls around us. We are no longer separate individuals, living our singular lives, but one body. Tudo esta ligado. Everything is linked. Everyone is connected.

All of a sudden I realize: WE are the church/iglesia/chiesa/igreja. Down the road is the Synod. They are debating, talking, arguing, agreeing. They are responding to the cry of the people, our cry. We are the heart of the living faith.

We pray, as we sway, as we sing, that the Synod will have the courage to row into ever deeper waters.