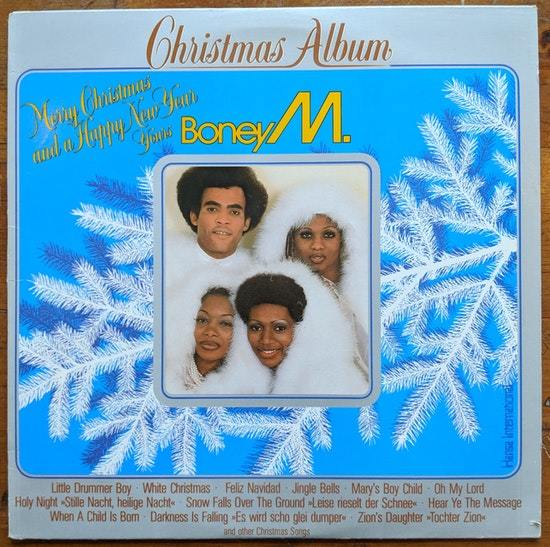 My earliest memory of the Boney M Christmas album is not of the music itself, but of fishing the cassette tape case off of the rear dash of my mother’s beige Buick when I was still a fairly small child. I remember being struck by the image of the group’s four faces, enveloped in a white fur that looked like the artificial snow in a department store window display. I can’t be sure that my memories are entirely accurate — I have no way of confirming if this was, in fact, the car that she had at the time. Part of me thinks that I’m remembering that vehicle as part of the larger memory only as a sort of ironic poetic justice, simply because the Boney M Christmas album is as close to the exact aesthetic opposite of a beige Buick as any collection of musical tracks could possibly be.

Christmas Album, by Boney M — not to be confused with the less popular Christmas With Boney M — is today among the most enduring disco-calypso-holiday records of all time; some might go so far as to say it defines the very genre. Christmas pop music is a very particular category with different evaluative criteria, and a great deal of dated kitsch that wouldn’t otherwise have survived the Darwinian world of popular culture has attained ‘classical’ status because its Christmassness throws off all of our usual, natural standards for measuring musical worth. It’s not at all clear to me that people enjoy Wham’s “Last Christmas” or Paul McCartney’s “Simply Having A Wonderful Christmas Time” owing to anything other than pure attrition. But despite this ambiguity, I’m going to venture the opinion that Christmas Album is, actually, good — sometimes very much so, and, when it isn’t, is not only interesting but gobsmacking. I once worked with a cameraman who declared that Christmas Album was the first holiday record he had ever sanctioned for year-round play in his household.

The record’s most beloved and musically successful track, “Mary’s Boy Child/Oh My Lord,” has rightly attained the status of an immortal, perennial classic, including a charismatically bizarre music video in full-length fur coats out front of St Basil’s Cathedral — burnishing the group’s post-“Rasputin” Russophilic bona fides. The song is a Christmas unicorn: the anthem that is at once both genuinely fun and poppy, accessible and danceable, all icicles and steel drums on the one hand, and, on the other, genuinely and substantially religious, professing a sound Christmas theology. The lyrics of the first, “Mary’s Boy Child” part of the song consists largely in imagery culled from the infancy narratives of the Gospels of Luke and Matthew, with their stories of the Holy Family and the difficulties in Bethlehem; “Oh My Lord” brings it home with the world’s most upbeat expounding of the cosmic and anthropological ramifications of the Incarnation, in Christological language that strikes just the right balance to keep everyone happy, from those advocating Anselm’s satisfaction theory of atonement to Scotus’s theory of the absolute primacy of Christ. Disco-Calypso-Thomistic-Franciscan-holiday good times. Christmas Album never quite hits the heights of “Mary’s Boy Child/Oh My Lord” again, but there is a thematically-linked cluster of natalistic tracks (“Zion’s Daughter,” “When a Child Is Born”) and they are all, in my opinion, the best on the album — along with “Little Drummer Boy,” “Zion’s Daughter” was the record’s other single.

The next most enduring of the songs is likely the band’s rendition of “Feliz Navidad,” which is perfect for the group’s full sound, with this instantiation full of bouncy flutes. Boney M’s “Feliz Navidad” is probably second only to José Feliciano’s in terms of big, popular recordings — but regardless of who’s singing it, structurally, one has to admit it’s just a very weird song. You sing it for years, always thinking you’re forgetting part of it, wondering why it never builds or progresses to anything; then you realize that instead of the usual structure of a song, “Feliz Navidad” is essentially made up of just two alternating choruses, one in Spanish, the other in English. After the eschatological heft of “Mary’s Boy Child/Oh My Lord,” “Feliz Navidad” gives us the repeating cycles of pagan myth; funky Sisyphus.

But the maniacal, lunatic peace [sic.] de resistance of Christmas Album is its final B-side track, sung by the Caribbean group’s German producer, Frank Farian: “I’ll Be Home For Christmas.”

We all know “I’ll Be Home For Christmas” — maybe Sinatra’s version, maybe Michael Bublé’s. Whomever sings it, the melancholic strains capture perfectly the sweet sadness of this special time of year, at once so dark and so brightly lit up. Particularly in these times, when so many of us are physically prevented from celebrating the holidays with all of those we love, the tune’s story of trying willfully to overcome geographical distance through the pure power of Christmas dreaming hits home hard.

Imagine our surprise, then, as the first bars of Boney M’s “I’ll Be Home For Christmas” begin in what can only be described as ‘nightmare oom-pah-pah.’ How will they reconcile this music, we wonder — which sounds like if Tim Burton owned a merry-go-round — with the misty poetry of the lyrics we know and love? Then we hear Farian’s terrifying, breathy voice:

I'll be home for Christmas

I'll be home just in time

I can't wait 'till I see you

Feel your heart next to mine

You and I all alone

I'll hold you close when I walk through that door

I'll be home for Christmas

And it’s only now do we realize that Boney M has not only written a totally original nightmare oom-pah-pah Christmas song for their album, but they have given it the same name as an already-extant, deeply-beloved Christmas song with a diametrically opposite storyline.

I’m surprised a beige Buick could even hold that tape.