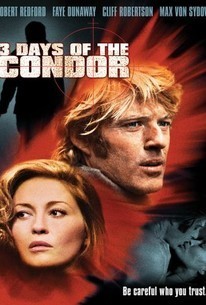 For each week of the season of advent, a lay member of the St.Brigid’s congregation at Christ Church Cathedral has been asked to offer a testimony in response to the theme “What Are We Waiting For?” A version of this text was offered as a homily on Sunday, December 15.

I can’t spoil Advent, because we all already know how that ends: just when everything is darkest, humanity will be given a new guiding light in the incarnation of God’s powerful love in a helpless baby, born in a barn.

The spoilers are for the Robert Redford movie Three Days of the Condor, which also takes place in the lead-up to Christmas, and whose final showdown scene is scored by a Salvation Army band playing carols.

The plot to Three Days of the Condor is both hilariously and hysterically complicated. Redford plays a scholar; but the small literary society where he works is actually a CIA front in which a small team reads every book published anywhere in the world, feeding their plots into a giant database, trying to see what information is being communicated in the subtexts. Redford finds an unsuccessful American book and can’t figure out why it’s been translated, and only translated, into Arabic, Dutch, and Portuguese. No sooner does he raise this issue than a team of assassins kills everyone in his workplace while Redford is out getting lunch.

Now on the run from Company hitmen trying to kill him, including an assassin dressed as a mail carrier, Redford’s character discovers a smaller, even more secret, even more powerful spy agency within the CIA. In the closing minutes of the film, Redford has an epiphany — which, in the liturgical calendar, comes after both Advent and Christmas — and realizes the malevolent conspiracy he’s uncovered: that the book was translated into the languages of the Middle East, Holland, and Brazil, because elements within the intelligence community want to ensure American control over the world’s most important oil fields.

To recap: there is a secret so secret that a complex labyrinth of false fronts, dead ends, and inscrutable clues must be used to protect it — and that “secret” is that the United States government is concerned about the global oil supply. The lengths to which Redford goes, the energy he expends to discover and then share this so-called secret are a bit like a dog slowly mastering the power of speech, patiently teaching itself English, and then telling you:

“I would like to eat some of what you’re eating.”

So what does any of this have to do with what we’re waiting for?

I stopped going to church when I was about 14, and started attending regularly again nearly two years ago. For most of the intervening 23 years, I was an atheist, deeply skeptical not only of religious claims but even the claim itself that spiritual practice answered any important, fundamental questions. Unlike a number of intellectual atheists, I didn't have any great hostility towards religion in the abstract, even if I was obviously horrified by its more grotesque manifestations: the kind of Buddhism that means death for Sri Lanka’s Tamils; the kind of Hinduism that means pogroms against India’s Muslims; the kind of Islam that means destruction for Syrian Christians; the kind of Christianity that targets and vilifies Jews; the kind of Judaism that justifies the dispossession of Palestinian Muslims and Christians. As a student of history, I knew well enough the economic and political contexts of those perversions to know that despite what Richard Dawkins might tell you, they can’t be laid at the feet of religion as such. Nevertheless, in 2006, when I was working as a book reviewer, and Dawkins’s atheist manifesto The God Delusion came out, I wrote a largely sympathetic review; an essay in which I also expressed my mystification at the criticism Dawkins came under from a writer I otherwise really liked — Terry Eagleton, a Marxist literary critic and coy Roman Catholic, or at least ecclesiastical fellow traveller.

But in the years that followed, it wasn’t Dawkins’s argument that stuck with me; it was Eagleton’s. By the time he expanded the ideas in his essay to book length, in a work called Reason, Faith, and Revolution, Eagleton’s thoughts on the nature of God and Creation had burrowed to the deepest part of me; to a place that was longing for God. Benign indifference to religion slowly started circling the potential for actual faith.

Ten years ago, the words spoken by my childhood priest at my grandmother’s funeral — words from the familiar green Book of Alternative Services that I remembered from the 1980s — gave me the first evidence that there was something still there for me in liturgy; that it could mediate my deepest possible feelings. Still, I mostly stayed away. I didn’t have a language yet for articulating a faith in God that could exist alongside my skepticism. I allowed myself one annual exception: Midnight Mass at my childhood church (now conveniently held at 7pm, to accommodate a shrinking, aging congregation). Eagleton’s conception of the revolutionary irony of the Christmas story is like what we heard in the Gospel according to Matthew this weekend: “What then did you go out to see? Someone dressed in soft robes? Look, those who wear soft robes are in royal palaces.” Eagleton is more direct: “Messiahs are not born in stables.”

If my secular Jewish friends could be ‘cultural Jews,’ my Midnight Mass was like being a ‘cultural Christian.’ It was also a pilgrimage to the church where that same childhood priest, Donald Grayston, had presided at my mother’s memorial, when I was ten years old. Mom’s ashes had been committed to the memorial garden outside, and if the church ever got so small that it was decommissioned, they’d have to dig that garden up and move it. So on Christmas Eve, I could go through the motions of Communion, make a donation to do my part to keep the church extant, then go home. Try to ignore the feeling of peace that’d washed over me as I knelt.

Two years ago, the Reverend Dr. Don Grayston’s funeral was held at Christ Church Cathedral. I was, at the time, in the throes of one of the major depressive episodes that are riddled through my life story. I sat in that sublime and beautiful space, framed by stained glass and arcing beams, and listened to stories of a man with a voluptuous, legendary love of life — and I felt nothing. The best I could manage was to want to want to love life.

In the course of my mental health care, I had tried mindfulness for my depression and anxiety; treatments based in a kind of secularized Buddhism that I was having trouble wrapping my head around. When I stumbled across the concept of Centering Prayer, learning that it was something Anglicans like Cynthia Bourgeault did, I thought it might be a practice more culturally accessible to me. I was also becoming, politically, increasingly drawn by the fact that I shared a faith tradition with someone like Desmond Tutu; that if it had value for a giant like him, that heritage had to be worth something to me. My childhood parish was too fraught with memories for me to re-join, but I started to wonder if there was something for me in the broader church in which I was raised.  Around this time of year, while reading a passage in another Eagleton book, Hope Without Optimism — terrific title — I decided that I had enough of the intellectual architecture in place to risk a visit to a new congregation, for something other than Christmas Eve. I had just been to Christ Church Cathedral for Don’s funeral, and my friend Christine, a United Church minister, had told me that this is where she’d go if she were an Anglican. So, in the ancient tradition of spiritual seekers, I looked at the website.

I figured I could handle Compline. It was on hiatus, starting again in February. I waited.

As February and March turned to spring, my anti-supernaturalist mind came up with all sorts of complex, intricate justifications for the fact that the half hour at Compline — praying and smelling incense, watching the flames at the tops of candles, listening to the transcendent voices in the schola — had become the highlight of my week. It was like theological bargaining with myself: if, say, bastardizing Eagleton’s definition, God was essentially another name for the fact that we exist, when we so obviously don’t have to— then faith in God was the decision to accept that existence as a gift. The Crucifixion and Resurrection could be allegorical ways of understanding that whatever the abject miseries of being alive, that life eternally wins the last word. It is always better that we are, rather than that we were not; billions of years ago in the desolate soupiness of the universe being born, there was a sense in which its being, rather than not-being, was good — and that sense was God.

And if my existence was a sacred gift, that I can’t do anything to earn or to lose, then that’s true of everyone’s, and from that would flow the myriad dimensions of our obligations to each other. With all those caveats lined up against superstition and magic, I gave myself permission to be at church.

And what happened? What happened once I, dog-like, had cobbled together the words to express that I wanted to have some of what God was eating? I found the bread had been broken for me before I’d even thought to ask for it.

There’s nothing wrong with intellectual rigour; quite the opposite. And there’s nothing wrong with complexity — Three Days of the Condor is a thrilling and compelling story, well-shared. The only tragedy is when something vital but simple gets lost in that complexity. For us to work so hard trying to solve a particular problem that we can’t hear God speaking the answer. Or simply the invitation.

As Christians, we’re blessed with a short, unambiguous summary of our entire faith, right in Scripture: the Great Commandment. Paraphrased by Presiding Bishop Michael Curry, it is of revelatory simplicity: “love God, love your neighbour, and love yourself.”

Through study, we can deeply enrich our understandings, and shade in the many subtleties, of those three imperatives for our entire lives. Over the years, we should expect that the answers we come up will change, for ourselves and others.

But we don’t need a protective shell in place to meet God.  And there are no exams to complete before we’re free to take Christ’s example as our own. “Love God, love your neighbour, love yourself.”

What are we waiting for?