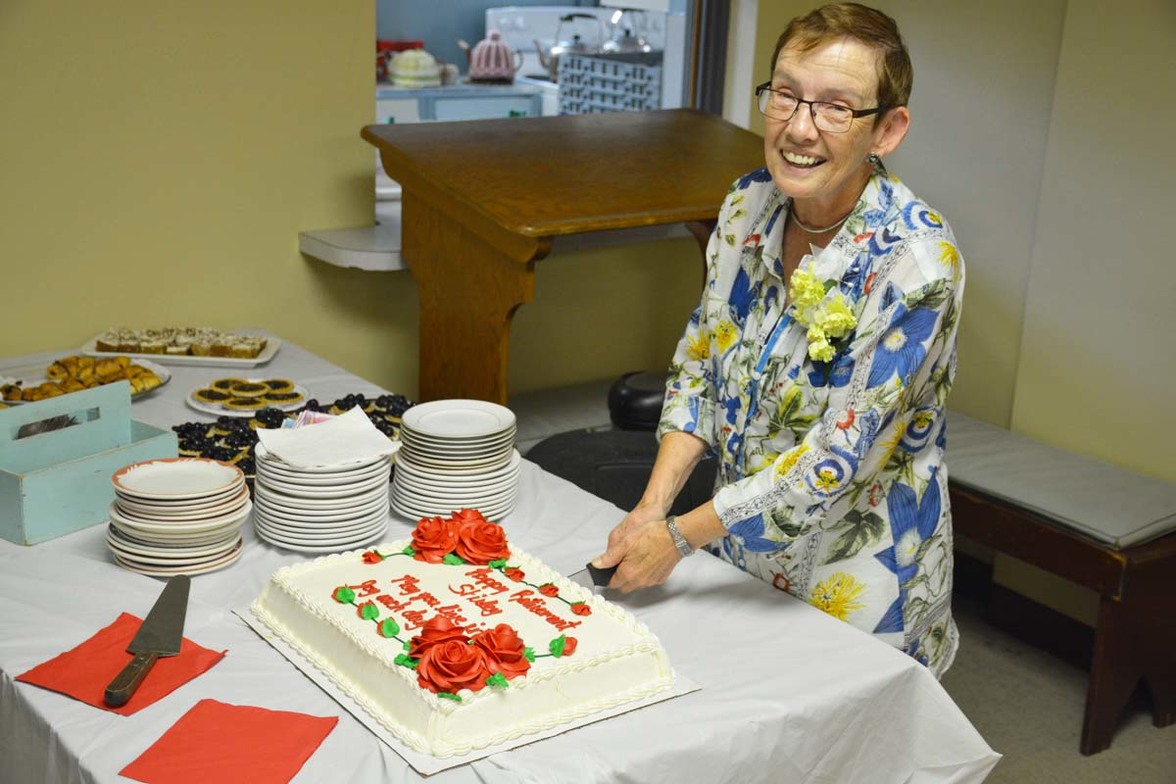 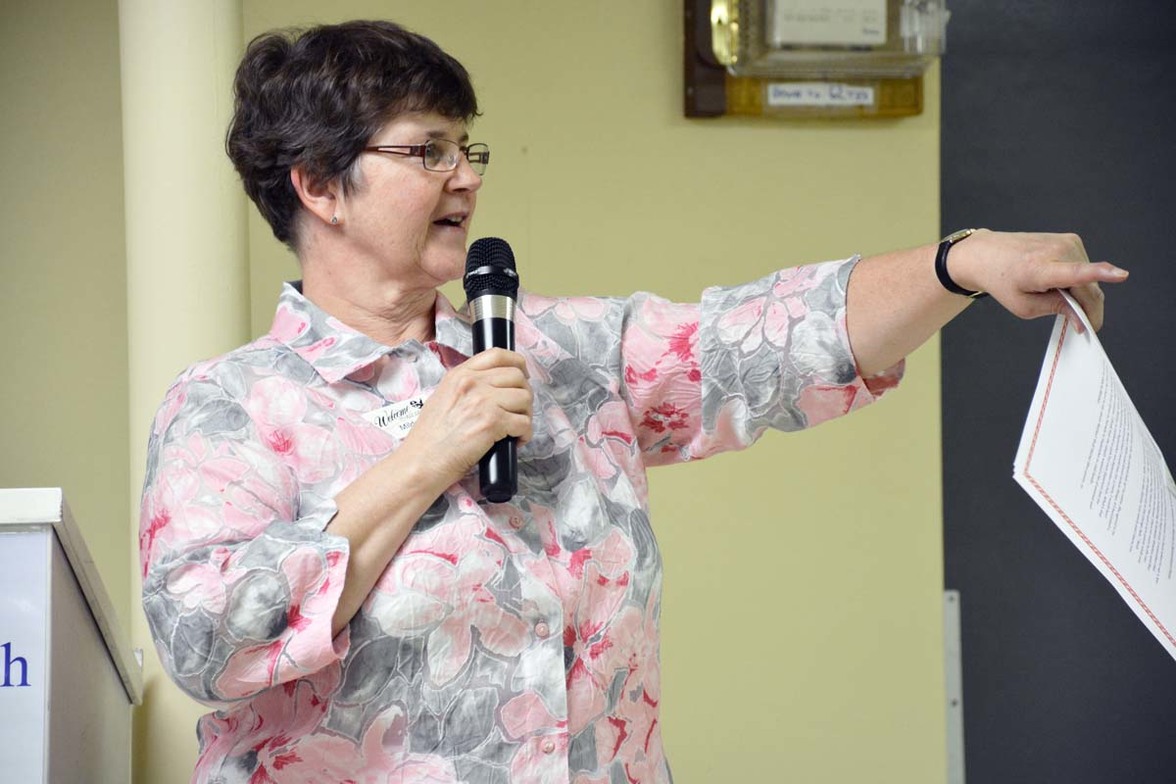 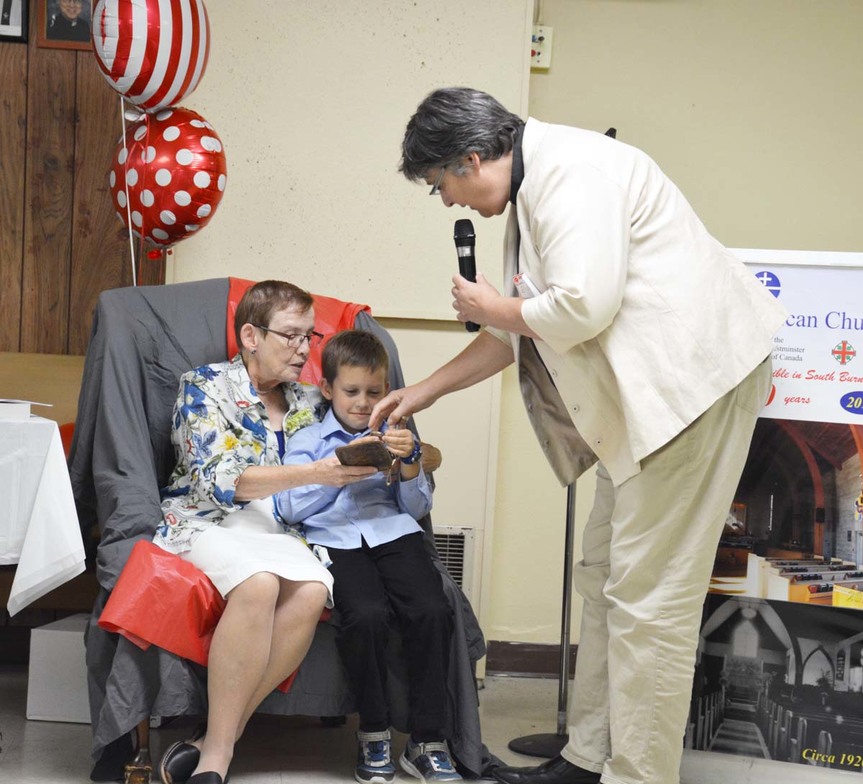 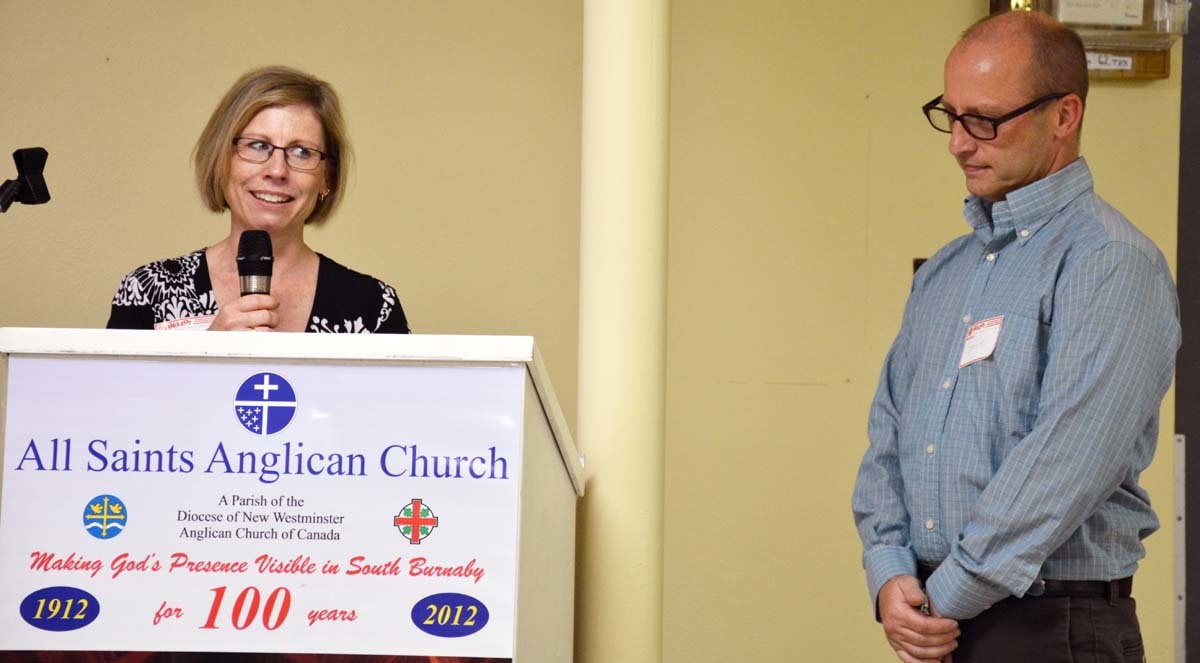 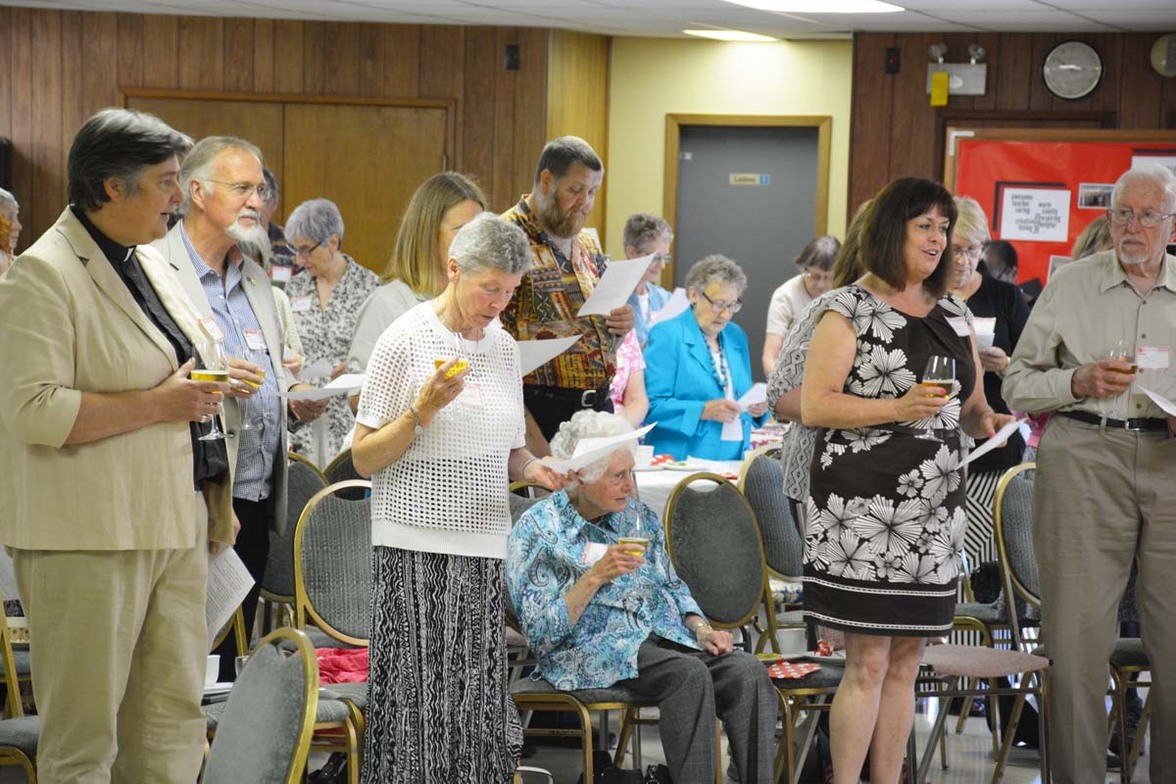 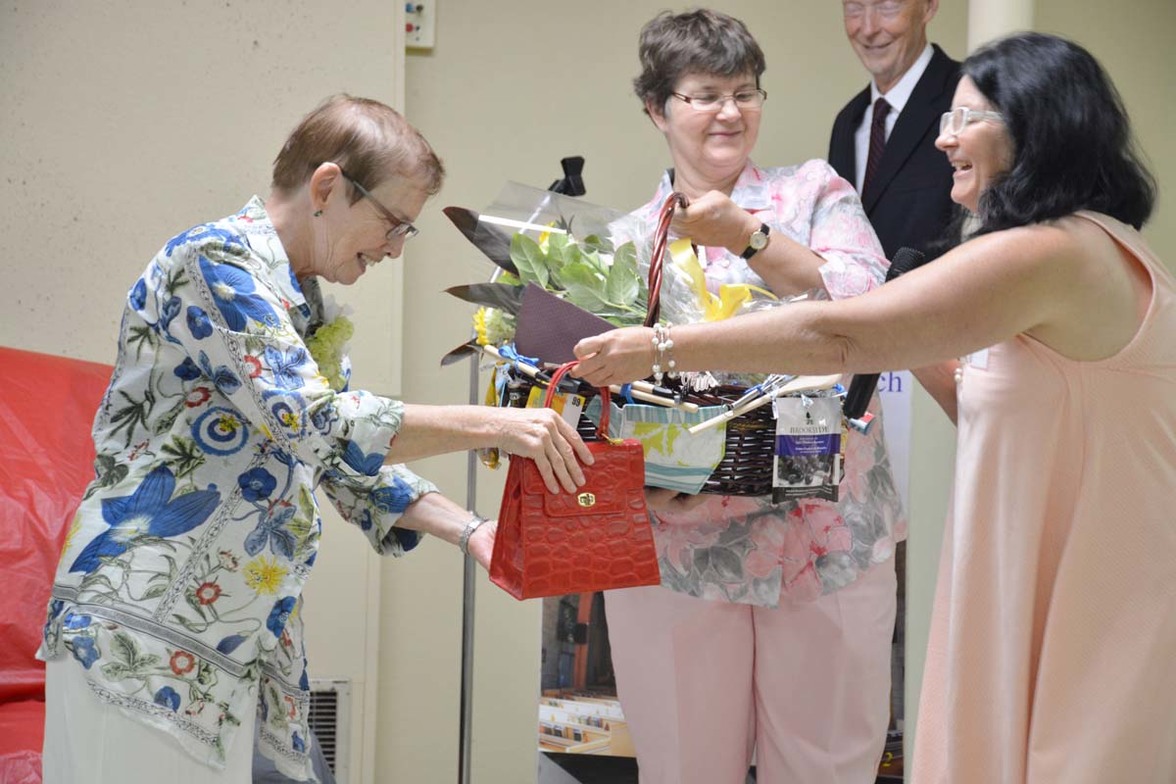 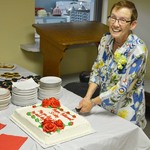 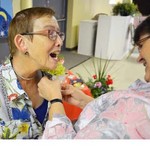 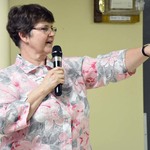 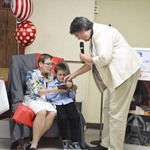 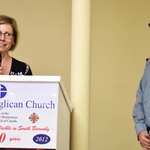 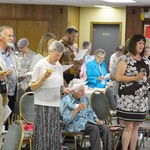 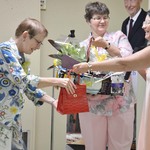 The Parish Hall of All Saints’, Burnaby with its donated furniture and 1970’s wood paneling never looked more vibrant, colourful, and welcoming than it did on the afternoon of Saturday, July 23, 2016. The improved aesthetic was due to the hard work of members of this dedicated and lively parish who came up with a decoration theme and carried it through. The purpose of the event was to celebrate 30 Years of inspirational ministry by the Reverend Shirley Stockdill  who had first retired in 2005 but found it very difficult to formally end her career in ministry while she still had so much more to offer. The All Saints’ folks knowing that their parish would be the last where Shirley would be appointed to a post of full time ordained ministry decided to at least try to create an atmosphere that conveyed the benefits of slowing down, taking time and curtailing those patterns of busy-ness by decorating with the theme “A Woman of Leisure”.  There was an ergonomic outdoor recliner, a number of inviting novels, poolside tables, bottles of wine, ice buckets, flowers, shade creating umbrellas and splashes of white and red in the form of balloons and ribbon.  The décor created a positive and uplifting environment for a retirement party.

The format for the retirement party was Afternoon Tea with a programme. Long tables were in place on the west side of the hall covered with sandwiches, sweets, snacks, pots of steeping tea and cold drinks.

The programme began forty minutes after the event’s start time which provided many of the guests with the opportunity to mix and mingle. Toastmaster/MC, Brian Anderson, a member of All Saints’ began the more formal part of the celebration by inviting Shirley to sit in the “Woman of Leisure’s” chair located beside the lectern. He began by reading a letter from Bishop Melissa Skelton who was unable to attend as she had long standing previous commitment in Chicago supervising the first ever session of the College for Congregational Development in the Episcopal Diocese of Chicago. As many of you know, Bishop Skelton is the founder of the College and also of the School for Parish Development as it is known here in Canada.

In her letter Bishop Skelton wrote:

“As Shirley moves to retirement, I celebrate her gifts for parish development, preaching and spiritual direction. She has made a real difference in the lives of many people, and the parishes she has served have been greatly enriched by her leadership.

Shirley is truly a mighty and loving force for the Church and for her people.

Please accept my best wishes for your retirement Shirley, and for the exciting things that come next for you in your journey.”

Bishop’s Warden, Mildred Johnson was called to the lectern and her first action was to hand Shirley the original letter from the bishop.  She talked about how Shirley’s appointment to All Saints’ in September of 2013 had changed things for the better and then she shared an original poem entitled “Our Shirley”.  Many thanks to Mildred for sharing her poem with diocesan communications, a pdf for downloading is available below.

After Mildred’s address, Brian Anderson read a letter from the Reverend Lilian Elliott who thanked Shirley for her guidance and mentorship during the early days of her ordained life at St. Margaret’s of Scotland in Burnaby. “You helped form me into a more thoughtful deacon…you showed me what it meant to listen…you have been a blessing to so many people.”

The Venerable Elizabeth Northcott, Archdeacon of Westminster represented Bishop Skelton and the Diocese of New Westminster. At this point in the program Shirley’s grandson Michael was sitting with her on the special chair. Elizabeth walked over and took out a warn leather wallet, undid the zipper and removed a beautiful metal pyx about the same size as a pocket watch. Pyxis comes from the Greek meaning box or receptacle and the pyx is a small round container used to carry the consecrated host to the sick or to those who are unable to attend Holy Communion at a church. Elizabeth told Michael that this pyx that she always carries was a gift to her from a friend, and by having it with her, she is reminded of her friend and of how we are all connected as the body of Christ through the Eucharist.

In her address, Elizabeth told the audience that Shirley was ordained to the transitional diaconate and priested both in the same year of 1986. Prior to, and also during that period of time Shirley graduated from Simon Fraser University and completed  her theological training at Nashotah House, an Episcopal Church seminary in Wisconsin. For the next 30 years Shirley served in ministry in the Diocese of New Westminster at: St. Philip; St Chad; St. Francis-in-the-Wood; St. Stephen the Martyr, Burnaby;  St. Margaret of Scotland;  St. George, Fort Langley;  St. Richard; St. Agnes;  St John, Squamish;  St. Christopher; St. Catherine, Capilano;  All Saints’,  Burnaby; and somewhere around the middle of this list there was a period when she was on Synod Staff working in the ministry of Stewardship, Gift Planning and Development.

Directing her words to Shirley as well as to all those gathered she said, “Shirley, you are teacher, preacher, counsellor, administrator; someone who loves us…you are a leader who walks with us, and demonstrates what it is to be a disciple of Christ…Shirley is a faithful steward of God’s Holy love.”

Shirley’s children, Susanne and Stephen Stockdill were invited to speak. Susanne did most of the talking for the two siblings and began by saying “the journey begins way before her career in ministry.”

Susanne supplied some biographical information which was new information for many in the room. Shirley was born in Moose Jaw, as a young girl she moved with her family to a flower farm in Victoria. She was one which he named in honour of his daughter, the ShirleyGladiola. She trained as a nurse, married and had two children. Eventually the family moved to a farm in Langley where Shirley was busy with: work on the farm, helping run her husband’s medical practice, continuing her learning as a student and was “always there for the kids.” According to Susanne there were “always cookies in the cookie jar.”

Shirley and the two children moved from Langley to a small basement suite in Vancouver so that Susanne and Stephen would be within the catchment area of the best schools. During that time Stephen quipped that “she discovered religion and went to the dark side.” Susanne told a number of anecdotes illustrating Shirley’s generosity, understanding and compassion and she finished by saying that neither she nor Stephen ever felt neglected or threatened by their mother’s dedication to those she ministered to, “you’ve (Shirley) given so much to the parish communities  but you never stopped giving to us or to your friends.”

Each section of the programme was punctuated with a song performed by members or a member of the All Saints’ choir accompanied by Barry Waterlow. Shirley had selected the songs. The first offering was James Taylor’s, “Fire and Rain” sung by members of the choir, the second selection was a solo performance by Nellie Porkert of the 1868 American standard, “Whispering Hope”. Then there was a solo performance of “Climb Every Mountain” from the Sound of Music, followed by the fourth selection which featured the choir singing the majority of the verses of Leonard Cohen’s, “Halleluljah”. Organizers then distributed some printed sheets containing the words and music of the popular hymn, “She Comes Sailing on the Wind” and the company stood and sang the hymn while wine glasses containing sparkling apple juice were distributed. When the singing of the hymn was completed, Brian led the toast to Shirley which she enthusiastically returned to the crowd.

It was now time for the guest of honour to share some of her thoughts. She began with this opening sentence, “I won’t say I’ve enjoyed every minute of the 30 years, if I did,  I’d be lying.” With the preceding words as an introduction, Shirley opened her heart to the room and spoke candidly about her faith, her vocation and her commitment to Anglican Identity. “I believe so much in our shared faith… Anglicans, we don’t fit many molds and I thank God for that.”

She presented some history of her journey to faith as a teenager in Victoria. “Mother and father were Methodists, Dad had lost his faith sometime in World War I, but they sent me to church…and I must admit I didn’t like it very much.” At 17 Shirley went with a friend and attended an Anglican Church youth group meeting and that was a defining experience for her. This was the first time and this was the first environment where she was treated like an intelligent human being. Based on her experience at the youth group, Shirley attended morning prayer and realized she’d “come home.”

At the age of 19 she was baptized and confirmed on consecutive days.

Shirley shared some of her feelings about her vocation. She said that she has learned so much from the people that she has met through her ministry and what a privilege that has been for her. “We sometimes forget how blessed we are…As priests we are invited into the best and worst of people’s lives with an intimacy that even doctors don’t have and we are so blessed because of this.”

After Shirley spoke there was the presentation of gifts and cards. People’s Warden,Yolande Varley presented the “purse” which was an actual red handbag. Yolande was quick to point out that the contents were for Shirley but the purse was to be returned. Bishop’s Warden, Mildred Johnson presented a large gift basket.  Associate Warden, June Kaiser presented the card covered with dozens of signatures and then there were more gifts presented personally to Shirley by members of the All Saints’, Burnaby community.

The word on the street is that Bishop Skelton has plans for Shirley as she enters into this new phase of life and ministry, but we can be assured that wherever she goes and whatever she does in the future she will in the words of Archdeacon Elizabeth Northcott continue to “demonstrate what it is to be a disciple of Christ” and a“ faithful steward of God’s Holy love.”

There are lots more photographs and captions located online on Anglican Conversation, the Facebook page of the Diocese of New Westminster.