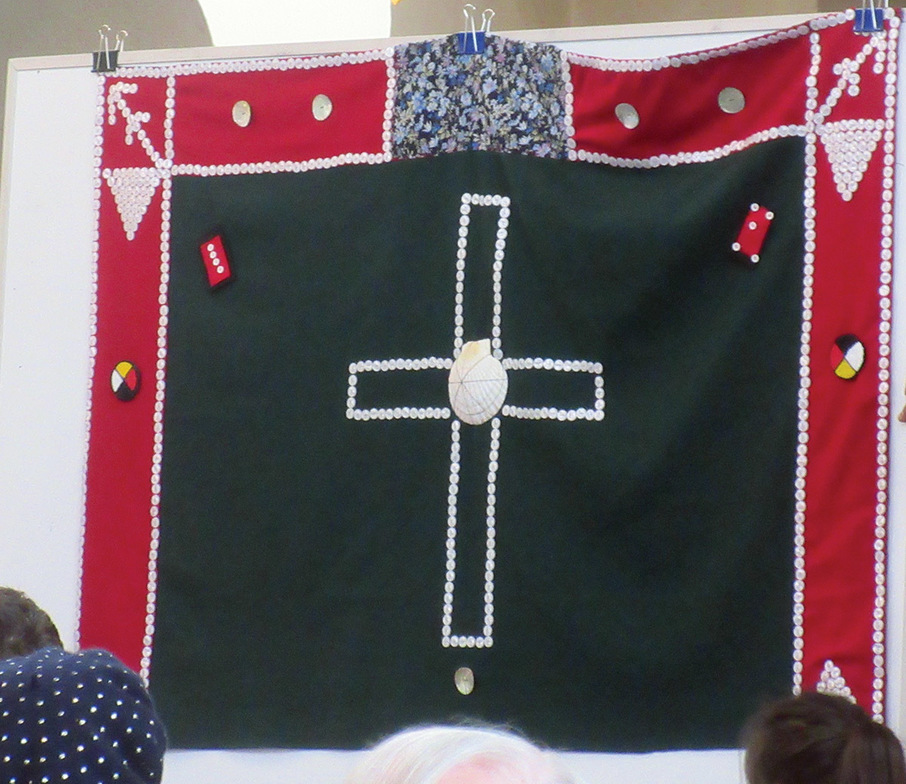 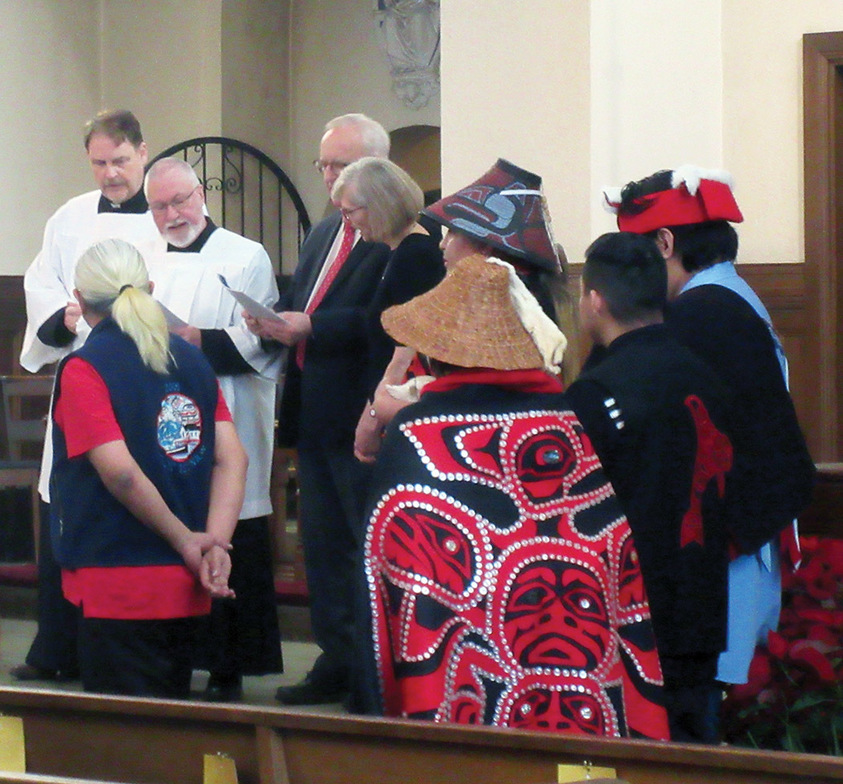 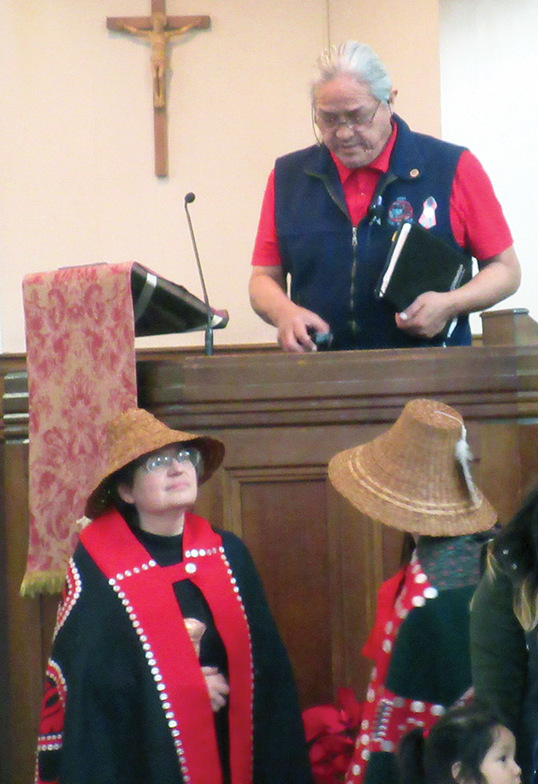 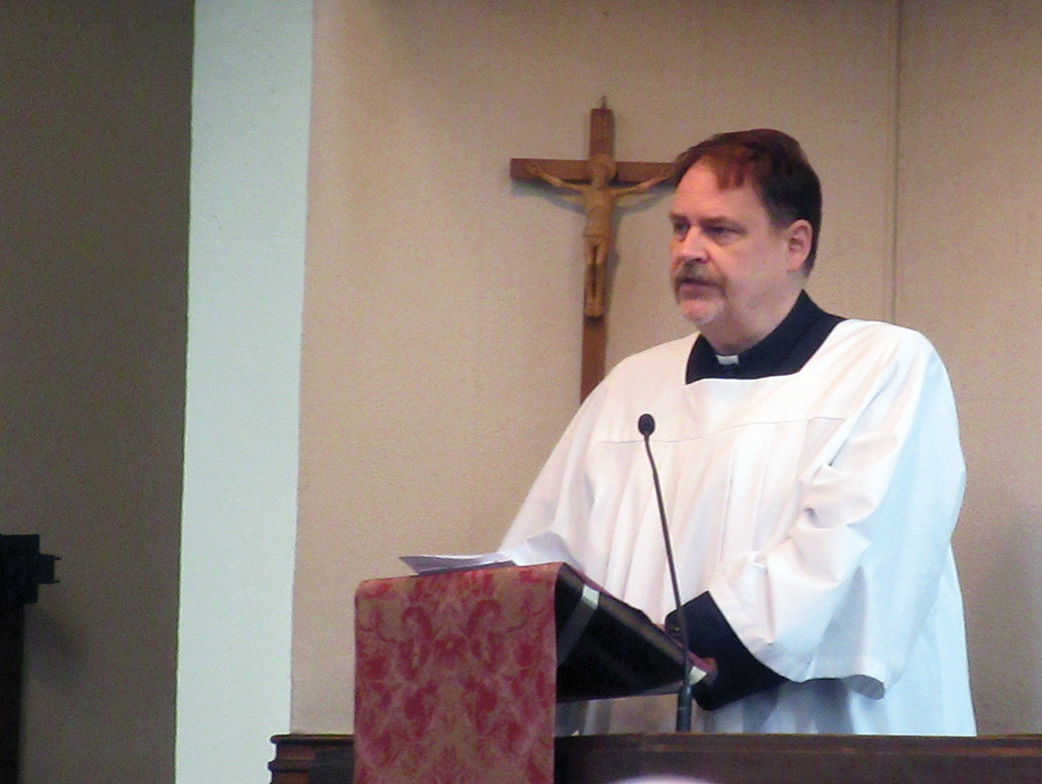 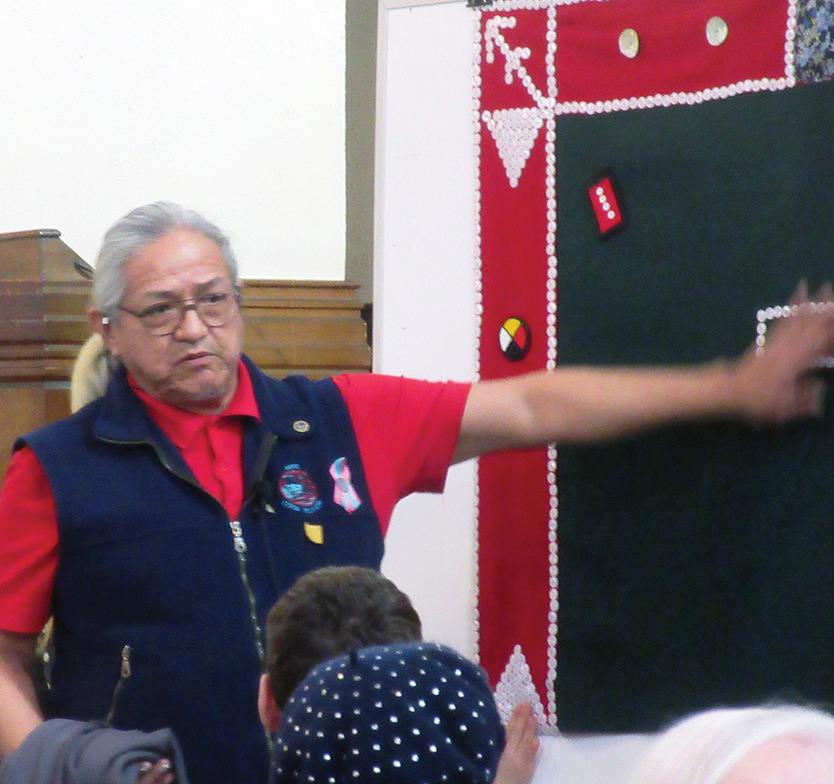 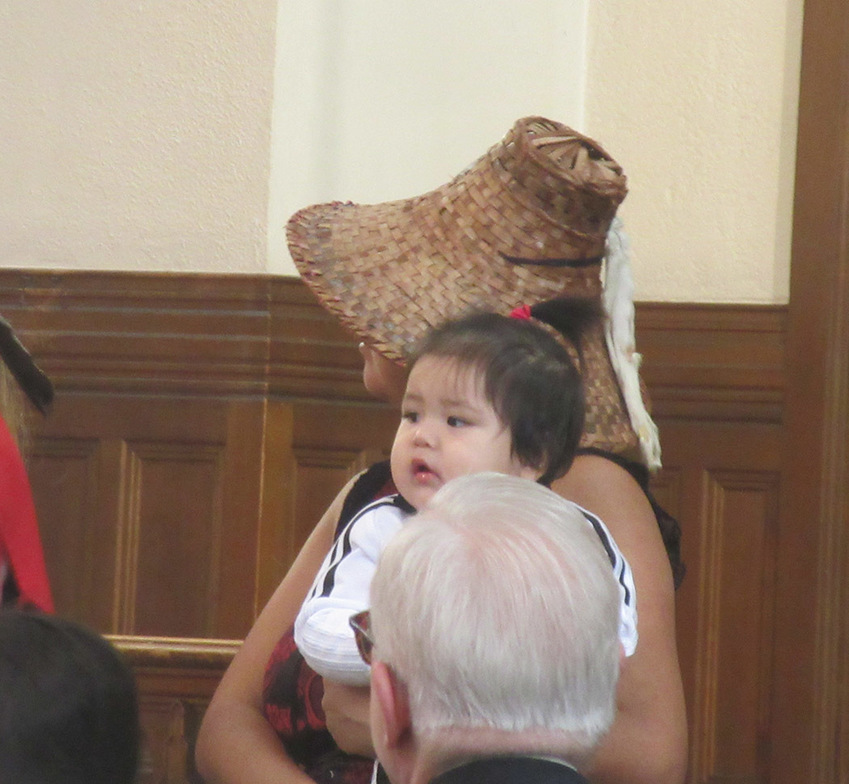 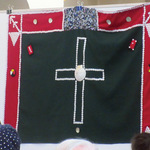 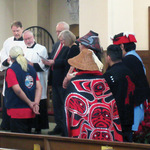 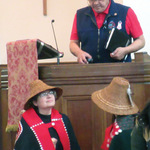 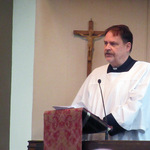 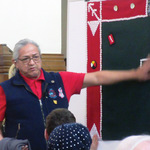 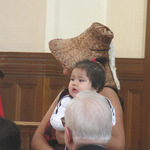 At High Mass, Sunday, January 26, 2020, Kelvin Bee, ODNW, an Elder from the Kwakwaka’wakw Nation and a Trustee of St. James’ Parish, presented to St. James’ church a ceremonial blanket that he made with the help of family and the congregation. He presented the blanket in recognition of the role that the Parish of St. James’ has played in the process of reconciliation and the help offered to survivors of residential schools. Kelvin did go to residential school on Vancouver Island.

In true Indigenous ways, Kelvin followed the act of re-giving in our traditional ways to honour the generosity of the church and the Anglican community for the Feast at St. James’ that took place in September of 2017. The Feast was an idea that Elder Kelvin suggested in order to honour residential school survivors and have a meal together to show the survivors that there is hope in healing. It was also the desire of Kelvin and the organizers to communicate that the church has a role in healing as well and that we can gather together as one community.

The blanket is blue and green, green being one of the primary colours used by the Kwakwaka’wakw Nation. Kelvin created the blanket to show the history of our people and the church. Especially important to Kelvin was to show the Creator with the symbol of the Cross and the Scallop of St. James’ The symbolism of the blanket also respects those close to Kelvin who have died.

Drumming and singing, Kelvin’s children and grandchildren joined him in bringing the blanket into the church. Before he handed it over to the church, he danced the blanket to awaken it and bring it to life.

The Reverend Matthew Johnson of the Street Outreach Initiative resident at St. James’,  talked about the initial relationship he had with Kelvin, admitting that it was not a very healthy one. Fr. Matthew described the two of them as “bulls looking at each other.” Each one had to recognize where this was coming from and from that point the relationship grew and so did the relationship with the church. The initial trust was not there, and the church was not a place that Kelvin saw as a part of in his life.

As Kelvin became more comfortable with Fr. Matthew and St. James’ parish, the trust became stronger and things began to flourish. He began building relationships in the church, getting involved by becoming a sidesperson, greeter and is now currently a trustee. His volunteer ministry was recognized in 2018, when he became the first Indigenous person to be invested into The Order of the Diocese of New Westminster

The power of a good relationship with Indigenous peoples and the Anglican Church is growing not just in BC but across Canada.

The gift from Kelvin might be considered a small gift, but it was from the heart; a gift given from forgiveness and acceptance that he belongs to the Anglican Church and that greater community. Indigenous peoples desire a place of equality and this has happened for Kelvin. He has come to a place where he was able to feel that he could give back to the Anglican Church after the hurt that had happened to him in residential school. Reconciliation is working for all of us, with stories that survivors are able to walk with others and give traditional gifts to the church communities.

Here are the notes written by John Daniel that were in the service bulletin and on the St. James’ website:

Presenting blankets to individuals or organisations is an important First Nations’ ceremonial tradition. At High Mass today, in place of the sermon, Kelvin Bee, who is an Elder of the Kwakwaka’wakw First Nation and a Trustee of St. James’ Parish, will present to the church a ceremonial blanket that he has made with the help of family and parishioners. First Nations Elders from Vancouver Island will also be present. By presenting this blanket Kelvin and his colleagues wish to recognize the role that St. James’ Church has played in the process of reconciliation and the help that it has given to survivors of the residential schools – of which Kelvin is one.

The recommendations of the Indian Residential Schools Truth and Reconciliation Commission set a framework for the process of reconciliation, in which the feast that St. James’ hosted in 2017 was a major milestone.

The blanket is made of Melton cloth, which is traditionally made of wool and woven in a twill form. It is thick, with a felt-like smooth surface. Green is a favourite colour of the Kwakwaka’wakw First Nation and the red edging represents the cedar door posts of the houses. Some 500 buttons, sewn on by Kelvin with the help of the clergy and parishioners, are a “new” aspect of the blanket tradition (only 250 years old). The abalone shells are from Bella Bella and the panel of patterned fabric recalls the dresses worn by the older generation. Symbols sewn onto the blanket include First Nations imagery from Saskatchewan to northern Vancouver Island. The corners of the blanket include patterns of trees (or arrows) pointing outwards to symbolise the progress of reconciliation. In the centre of the blanket is the scallop shell of St. James’.