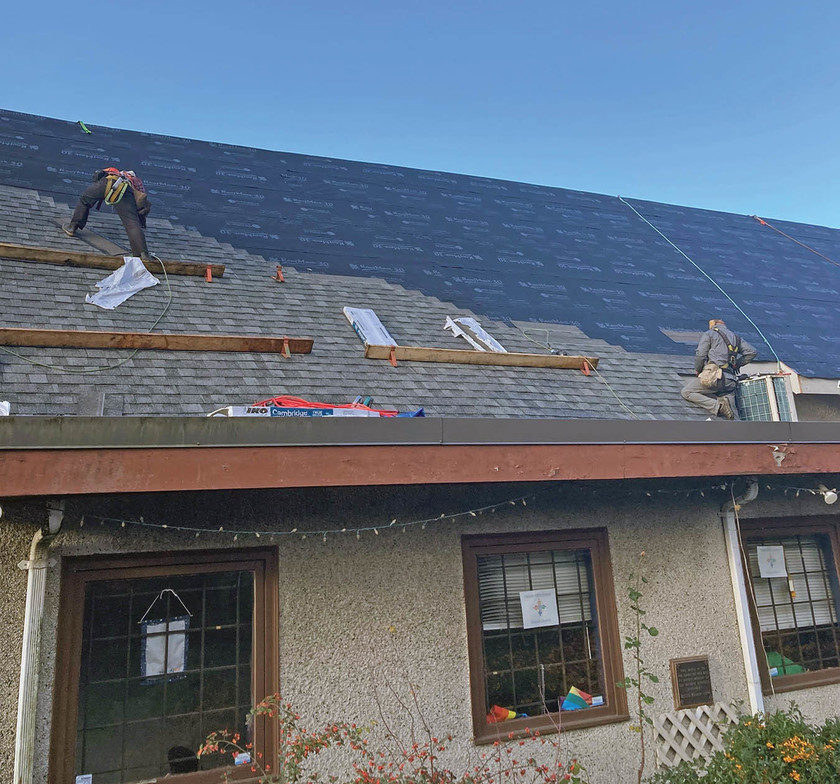 Although I've edited and posted this story it is primarily the work of Michelle Hauser, Development Consultant for the Anglican Foundation with support from the Reverend Emilie Smith, Rector of St. Barnabas, New Westminster. Michelle submitted the story to diocesan communications September 22, 2021, however we decided to wait until we heard from the Reverend Smith as fall weather in the lower mainland is predictable and it's pretty tough to put up a new roof in a west coast rainstorm

Here is a lightly edited version of Michelle's piece with Emilie's and the editor's additions.

In a certain churchyard in the Diocese of New Westminster, there stands an extremely busy parish hall that—according to structural engineers—must be liberated from three layers of deteriorating shingles before it can hope to keep the community who depends on it comfortable and dry.

“Our hope,” says the Rev. Emilie Smith, priest at St. Barnabas Anglican Church since 2013, “is that this year we won’t have to have buckets catching rainwater during our Christmas Day meal.” Smith struggles for words when she talks about the parish’s 100-year-old hall, its roof, and the burden it bears.

“The roof has been just…,” says Emilie, followed by silence and a long, despairing sigh, “…its best before date was about 15 years ago. It leaks on the United Church congregation which shares our hall, and it leaks on our food cupboard.”

Early estimates for a thorough repair, including the removal of all the old shingles, went as high as six figures, leaving everyone at St. Barnabas feeling discouraged. “We thought it was going to be impossible,” says the Rev. Smith. “We are not a church with deep pockets, or investments that can help us through these kinds of things.” And, she explains, “The hall is where everything happens. The church is the centre of who we are, but the hall is the heart.”

Established in 1891, as a church for working people, St. Barnabas has been a neighbourhood church for 130 years. According to Emilie, “We are connected to everybody who lives in the neighbourhood, whether they come to our worship services or not.”

St. Barnabas’ hall hosts the most popular daycare in New Westminster, which cares for about sixty children, and the hall is home to numerous recovery groups. “There’s a different group here every day, sometimes twice a day,” says Emilie, who has been trained in the use of the church’s naloxone kit. While she has never had to use the life-saving device, she says seeing it mounted on the wall serves as a strong reminder of “who we are” and how the parish has been called to serve community members who struggle with addiction and other challenges.

Not to be forgotten, of course, is that the hall is the operational hub for the church’s food security programs—running strong for nearly three decades. During the COVID-19 pandemic, the service model evolved to include a grab-and-go grocery program that fed eighty families per week for a year and a half.

If one were to count all the people in New Westminster who depend on St. Barnabas for some form of comfort or security, there are well over a thousand reasons to fix the roof and to fix it quickly.

Thankfully, after months of searching for a solution to the roofing woes, a more affordable estimate finally came in—one that has been lessened by community connections, including a retired roofer who is willing to pitch in. “And we are very grateful to the Anglican Foundation of Canada for a $10,000 grant this past spring,” says the Rev. Smith.

Everyone at St. Barnabas is feeling much more hopeful about the new roof. Sighs of relief will soon replace sighs of despair and “the little church that could” will keep chugging right along. Construction was scheduled to begin in late September, early October but really got underway in late October, which means that the Reverend Smith’s and the parish’s Christmas dream, the one that doesn’t include pails and buckets as surplus decorations, will for the most part be a reality.

In the past decade, AFC has provided grants and loans totaling nearly $1 million for parish hall projects. “Investing in churches like St. Barnabas' strengthens communities from coast to coast to coast,” says the Rev. Canon Dr. Judy Rois, Executive Director, AFC. “We imagine an increased role for churches in a post-pandemic world, which means that now, more than ever, AFC needs to be a supportive partner, providing abundant resources for pandemic recovery.”

In mid-October the lower mainland of British Columbia endured some huge storms followed later on October 24 by a “bomb cyclone.” That initial storm on October 14-15 really caused some problems for the St. Barnabas hall, however after the storm came the calm and the Emilie took a few minutes to write a note to diocesan comms and share a brief accounting of the story,

The parish hall at St. Barnabas was in trouble --its roof literally melting. The hall is the heart of the church’s neighbourhood ministries – we host daily recovery groups, and weekly food activities. It is the site of our offices, and of New Westminster’s oldest, and most loved, daycare centre.

Then the “atmospheric river” arrived on October 15 – 16. It poured right through the roof into the office of St. Barnabas tenant -- and best friend -- Shiloh-Fifth Ave. United Church.

“It was coming right through the light fixture,” says exasperated Shiloh minister, the Rev. Shannon Tennant. “And through the smoke detector.”

“Then it flooded into our food cupboard room,” added Emilie.

“We crossed our fingers hoping it wouldn’t rain, but the monsoon season got ahead of us,” said Smith.

But – thanks to St. Barnabas’ friend, and New Westminster city councillor, Chuck Puchmayr – the job is happening.

“It was quite a mess,” said Puchmayr. “There were four layers of asphalt shingles slapped one on top of the other. And it was about 15-years past its best before date.”

Once the shingles were stripped, however, the elegant construction of the original building was revealed. The bones of the roof were in perfect shape. No rot had seeped in to destroy and the new roof was able to go up in the time between the October 15 and October 24. There were some beautiful, clear days as we can see in the photos posted here that were taken on October 20.

The new roof is going up, thanks to funding from the Anglican Foundation and the Diocese.

Will need to do a bit more fundraising: the ceiling and insulation above Shiloh, and in the food cupboard room will need to be replaced.