An Evening to Remember at St. Christopher's 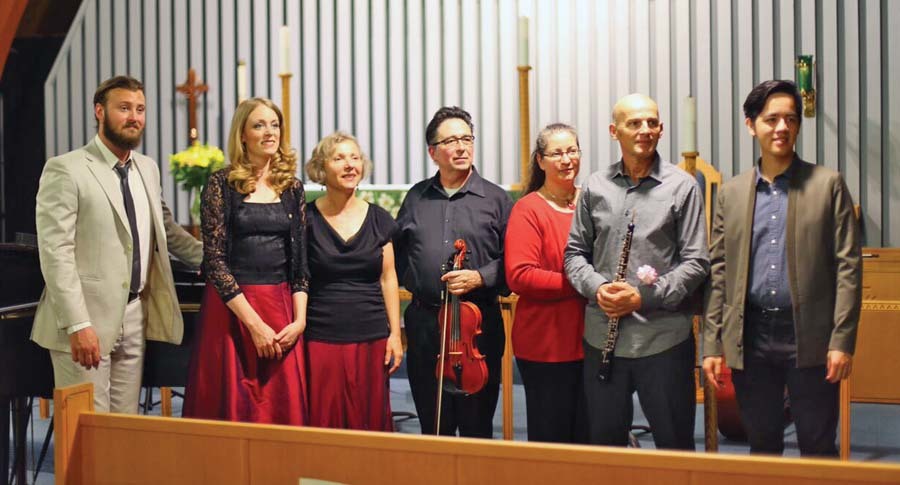 "An Evening to Remember” presented September 11 at St. Christopher’s, West Vancouver, was certainly well-named as this fundraising concert was one to look back on with joy. Initiated by St. Christopher’s Director of Music, Dr. Annabelle Paetsch, the program show-cased six other musicians performing a variety of works from the classical repertoire.

The opening selection, Concerto for Oboe and Violin, by Georg Philip Telemann featured Douglas Hagerman on oboe and Edgar Bridwell on violin with support from pianist, Paetsch and double bass Anne Duranceau. This group also accompanied Alexandra Hill, soprano, and Jason Cook, baritone who sang the Papageno and Papagena duet from Mozart’s The Magic Flute. The audience was charmed by the flirtatious acting of the couple, as the duet very quickly became an “anything you can do I can do better” type of humorous competition.

Accompanied by the exquisite playing of the piano accompaniment by Annabelle Paetsch, Edgar Bridwell performed the violin Sonatina in G minor by Franz Schubert. These two performers added the oboe and double bass to back up Alexandra Hill’s “come scoglio” Fiordiligi’s aria from Cosi Fan Tutte where she states quite clearly that her love is “firm as a rock”.

A change of mood was embraced by Douglas Lau who offered the 1955  Erroll Garner standard Misty on the concert grand piano. Douglas is the lead baritone in St. Christopher’s church choir, and was remembered by the audience for his appreciated contribution to St. Christopher’s jazz evening this past spring. The mood continued by the performance of two Sinatra songs by baritone Jason Cook, who then impressed the group by his approach to Danilo’s Aria from Lehar’s The Merry Widow.

The small orchestra were featured on three selections: Oblivion and Ave Maria by Astor Piazzolla, and added the vocalists for the finale of Somewhere from Bernstein’s West Side Story

An evening to remember it was, and concluded with refreshments in the church hall.

Fundraising is for the renovation of the church and the Parish Hall exterior, including painting to restore the original colours, replacing some rotting roof timbers, the exterior sign, and repairs to the eavestroughs.  The estimated cost of this current renovations project is $40,000.  A net of $2,284 was raised at the concert.