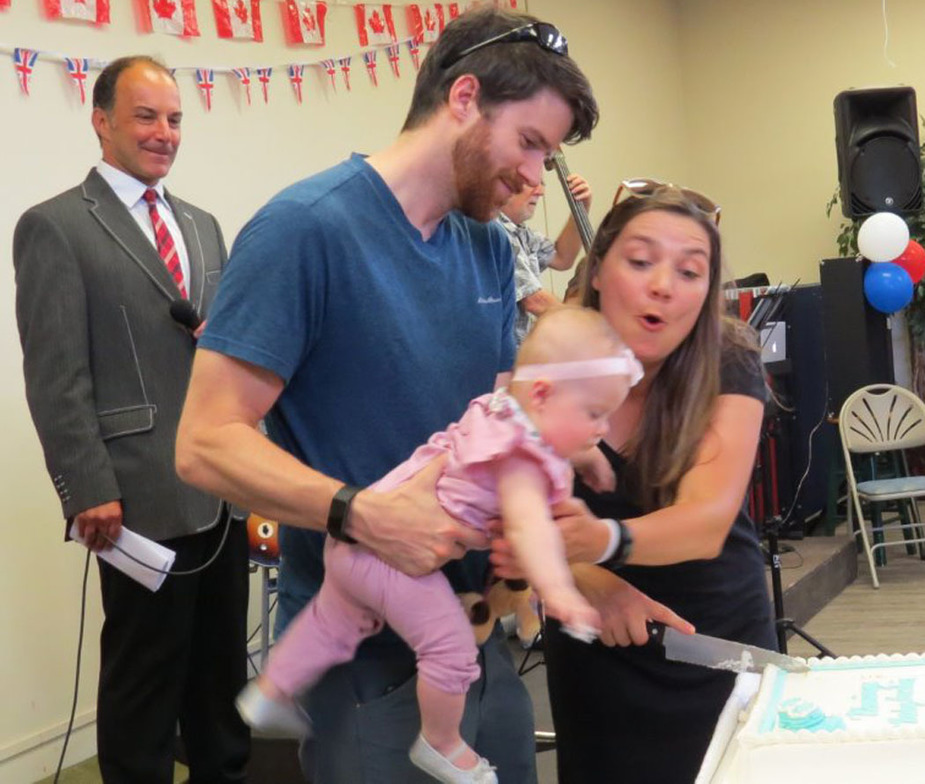 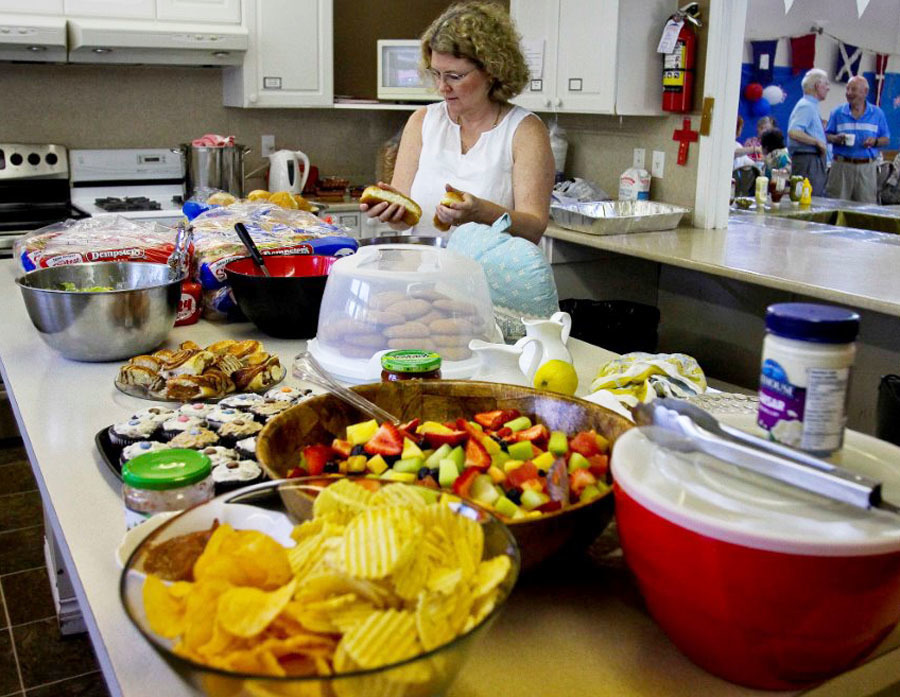 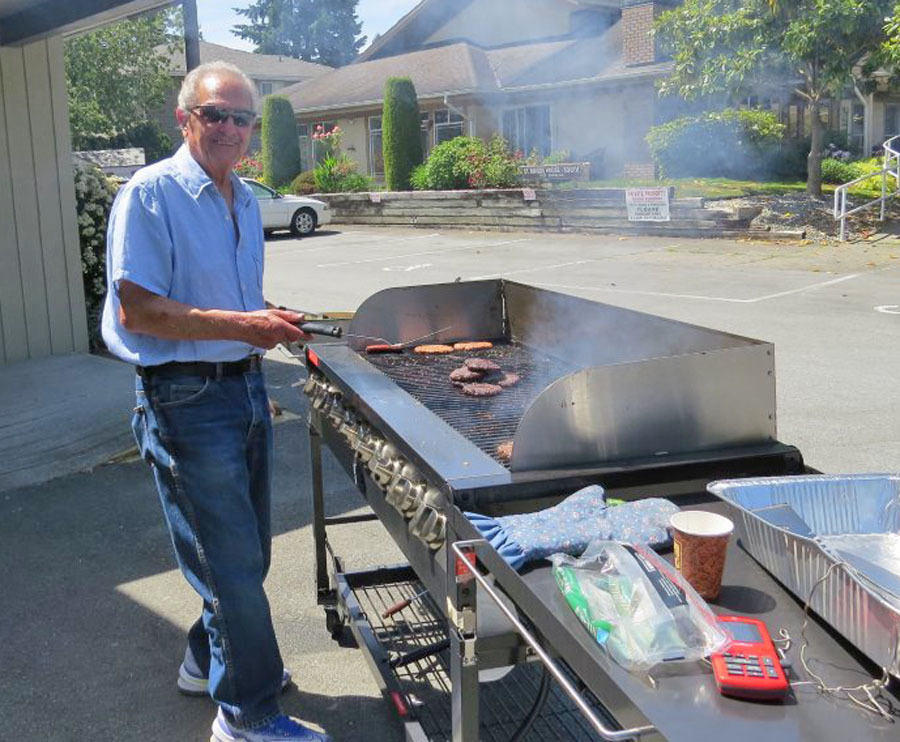 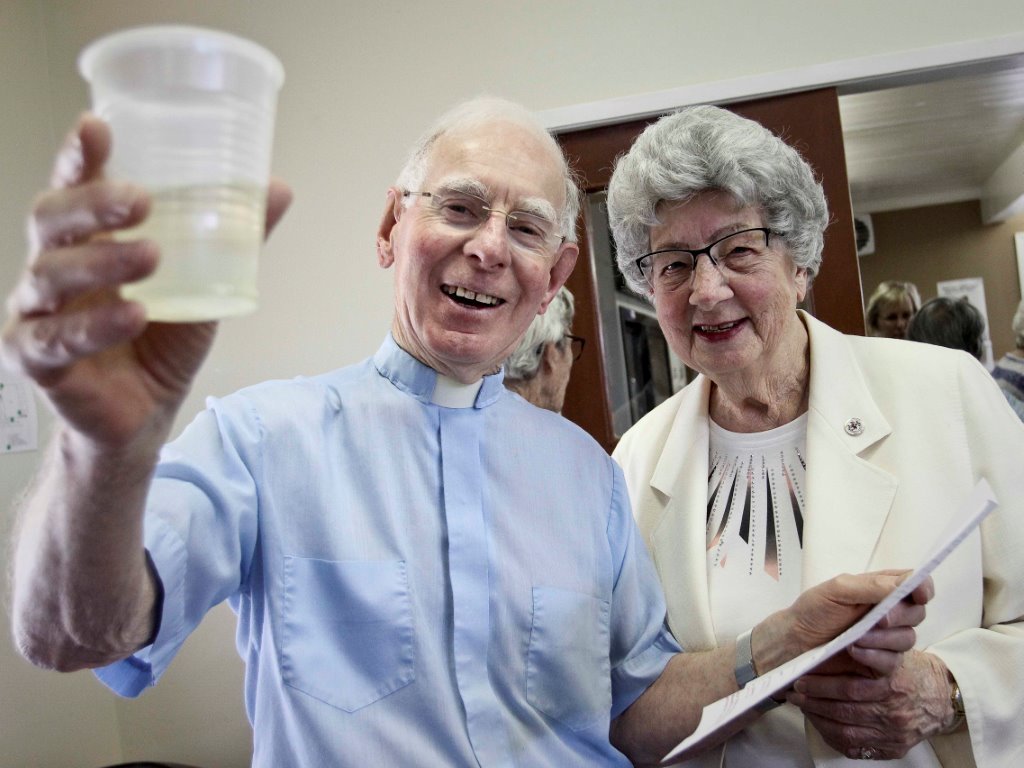 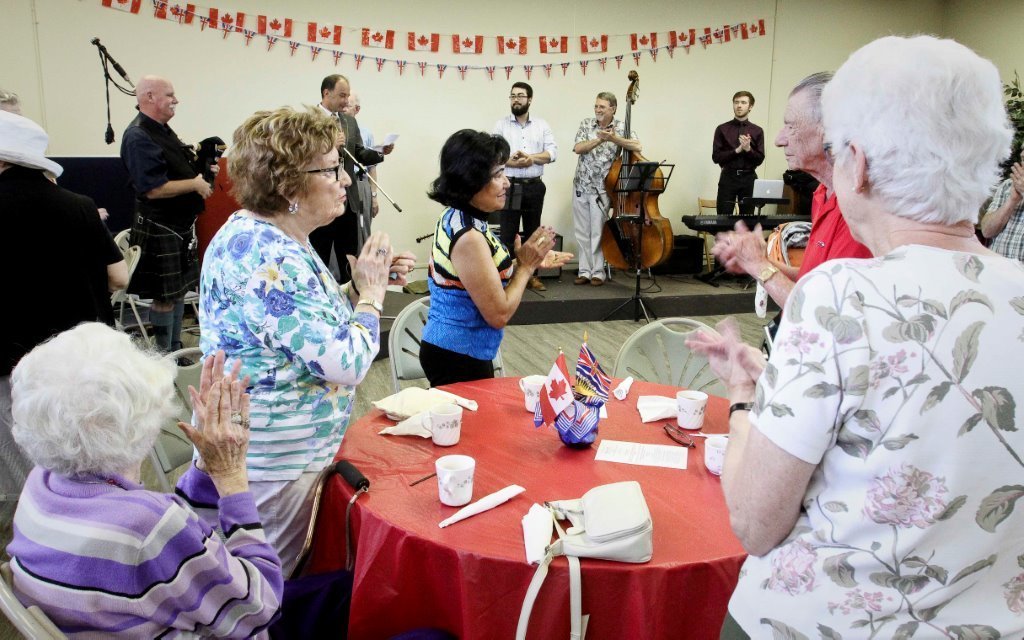 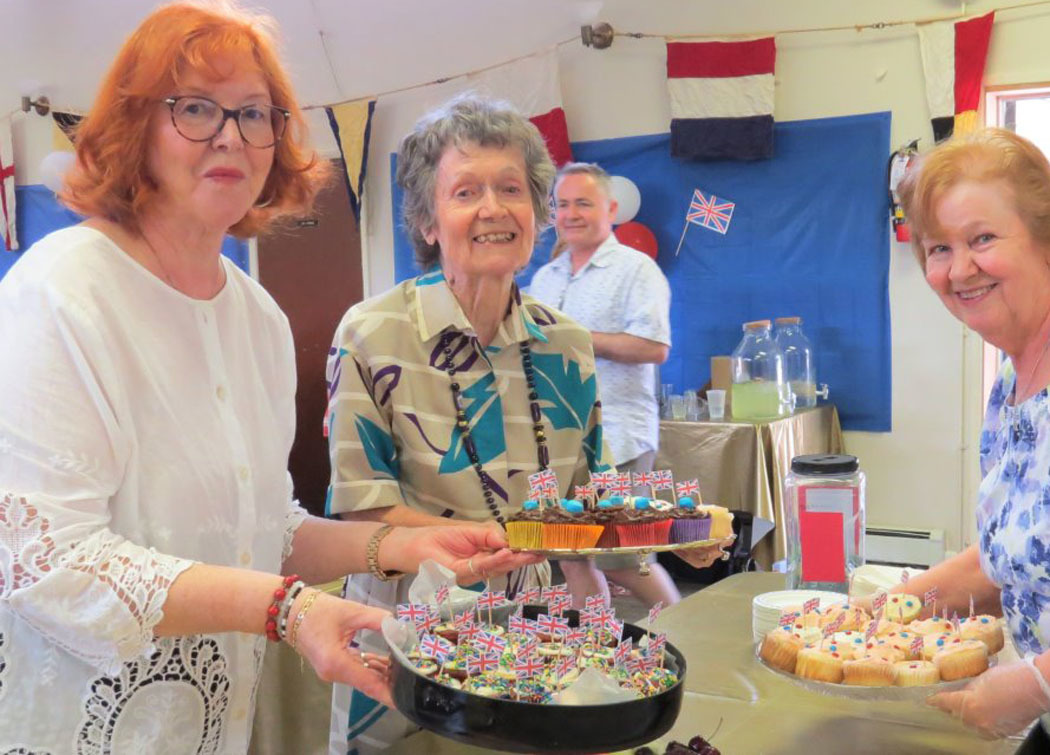 When the patron of Big Lunches, The Duchess of Cornwall, said “The Big Lunch seems to have gone from big to enormous”, Her Royal Highness might well have foretold the large gathering at St. David’s Big Lunch June 2.

Following the success of last year’s Big Lunch, held indoors for the first time due to iffy weather, the 8th Annual Big Lunch also took place in the parish hall – full to capacity, and overflowing to  brilliant sunshine that had been the norm for so many previous Big Lunches.

Prior to the official start of the event, parishioners, friends and neighbours enjoyed some time together while  a trio of Hamilton Street Swing musicians played in the background.  Hamburgers and hot dogs sizzled on the barbecue; volunteer servers arranged the buffet table with assorted salads and condiments, and RCMP piper John Ralston tuned-up in readiness for his ‘leading’ role.

Piped to the platform, MC Anthony Hanna extended welcome greetings and invited the Rev. Arthur Nash to say Grace. Following the recent departure of vicar, the Rev. Tim Dutcher-Walls who completed his ministry term, St. David’s is currently in a period without an assigned priest but all wer delighted to welcome Rev. Nash. It was his 2nd Big Lunch as he happened to have also led the worship services at St. David’s on Big Lunch Sunday in 2018.

Special guest, the Rev. Liz Hamel, interim-priest-in-charge of neighbouring parish All Saints’ Ladner, brought greetings and prayer to an assembly bound together in fellowship and goodwill.

Between salad and dessert courses, John Ralston’s pipes captured attention for the piping to the platform of program participants who filed-in behind Sandy Simpson and a decorated cake in honour of baby Archie Harrison Mountbatten-Windsor whose birth May 6 was the theme of today’s Big Lunch.

The soprano voice of talented parishioner Rosemary Gahr rang out in the singing of God Save the Queen, and then came Anthony Hanna’s Tribute to the firstborn son of the Duke and Duchess of Sussex. Anthony made special mention of the band’s pianist, Strauss Whiteside, who composed a Hamilton Street Swing version of the ‘lullaby for the Royal baby’ written and performed in London by the UK’s Kingdom Choir, and now heard for the first time at St. David’s.

To the soft strains of the new lullaby, Sarah Steele-Dunwoody, mom of six-month-old Rose Autumn, cut the celebratory cake while dad Paul held an enthusiastic Rose, whose tiny fingers to the amusement of all, reached out and into the white and baby-blue icing!

The Big Lunch concept, launched in 2009 by the Eden Project (located in a small Cornwall hamlet in the Parish of Saint Blaise), is about the millions of people across the Commonwealth getting together to meet, greet and share a meal, every first weekend of June. The Project is supported by Britain’s National Lottery Fund to encourage people to take positive actions that strengthen and build stronger communities. It was a simple idea that has ignited a passion for ordinary people doing everyday things that create extraordinary results.