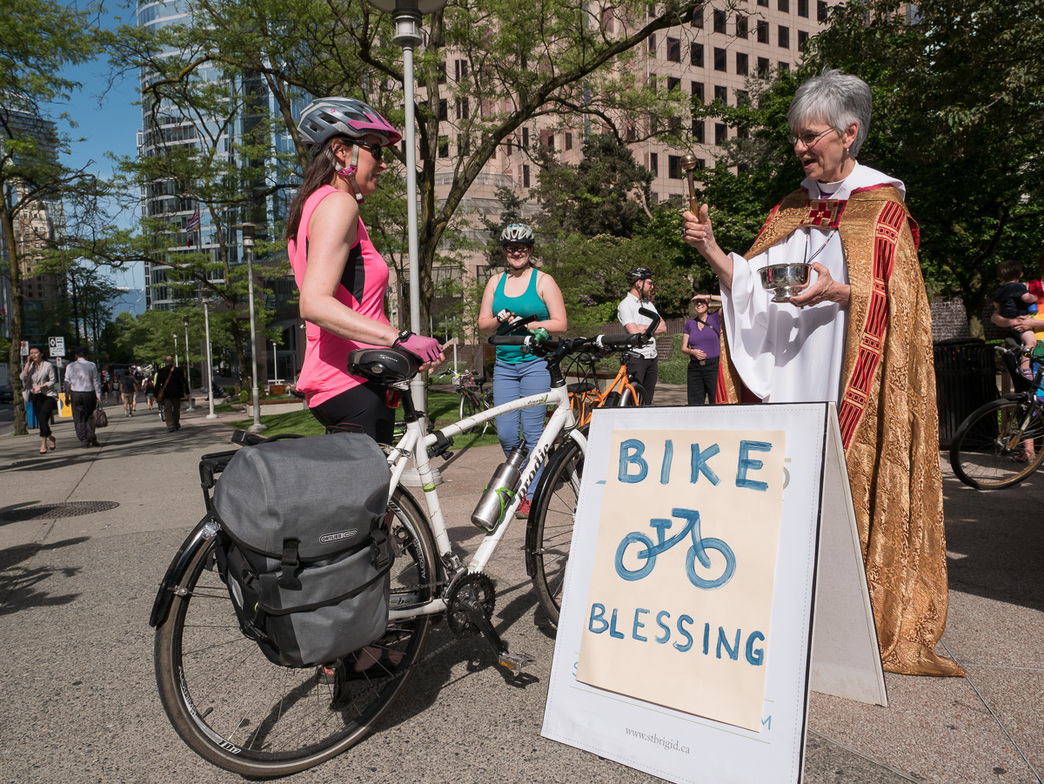 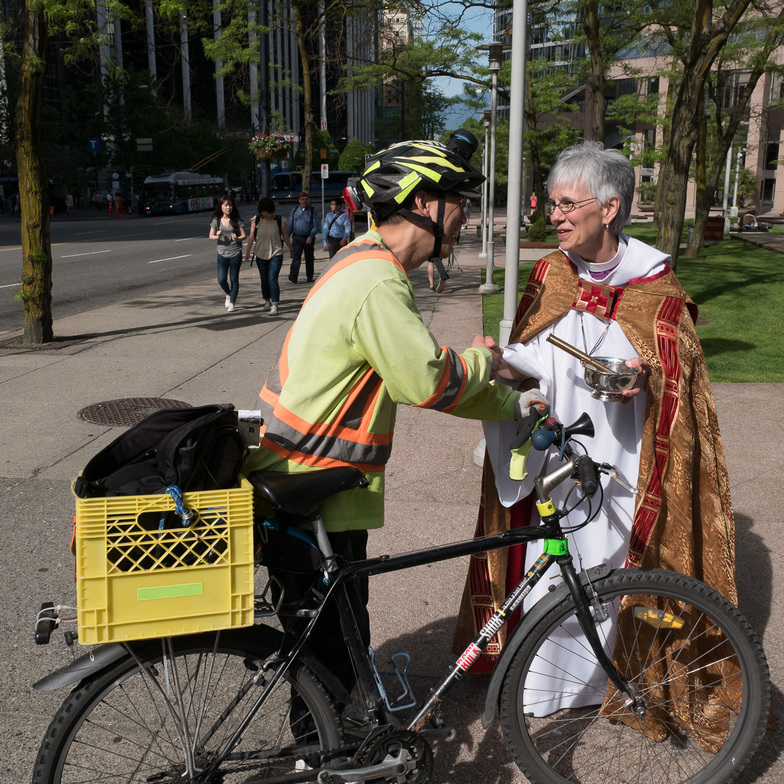 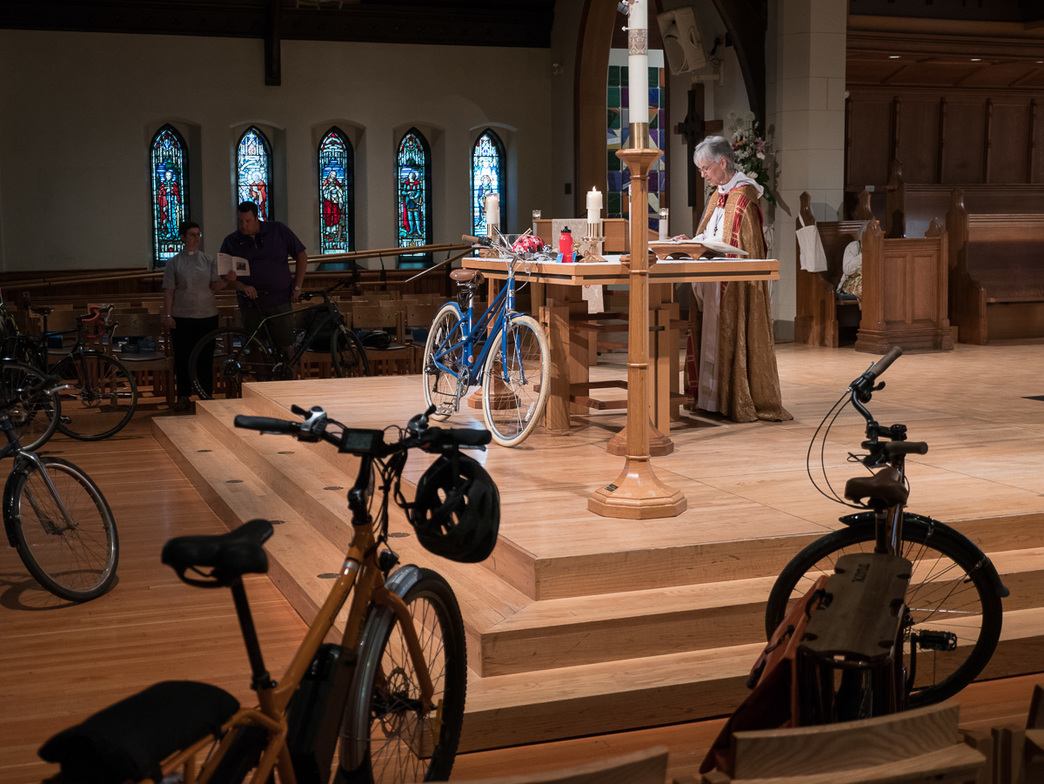 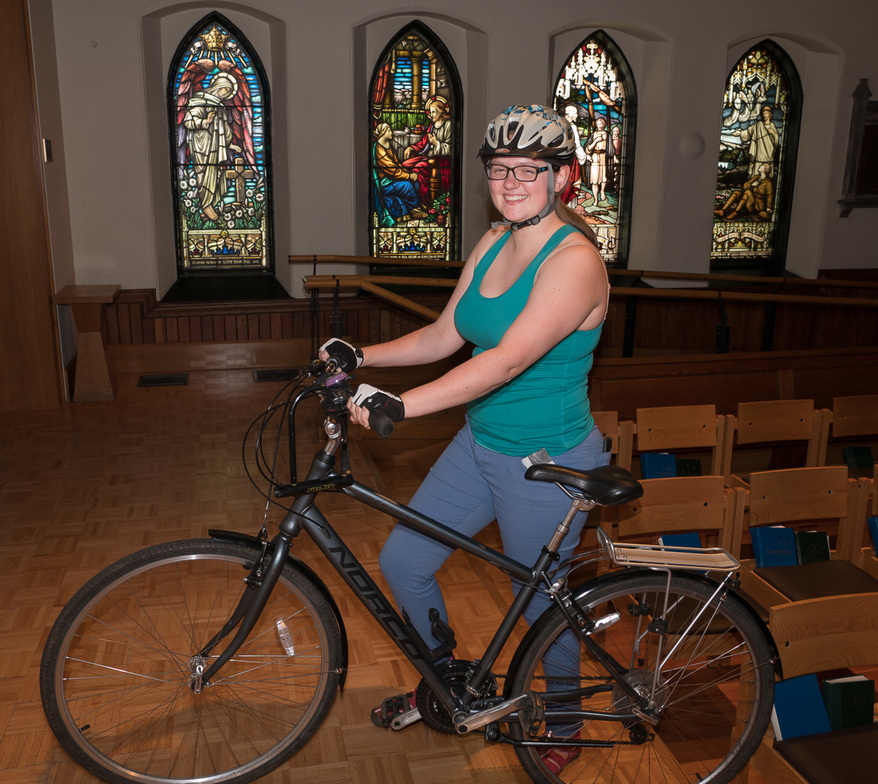 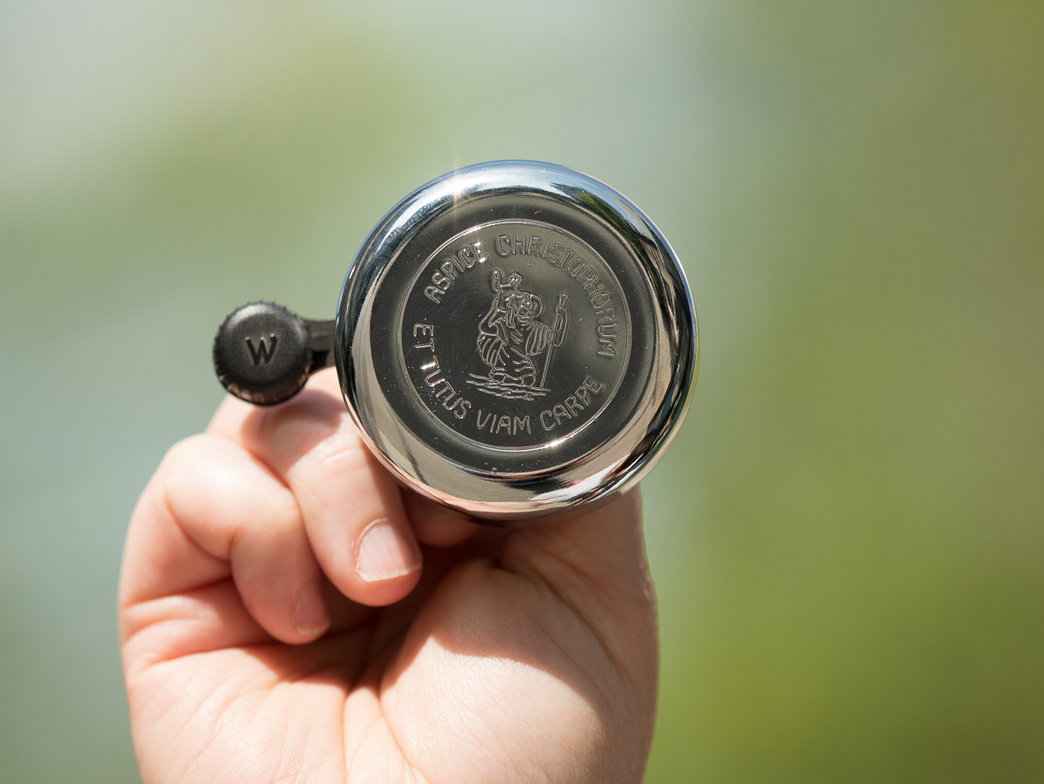 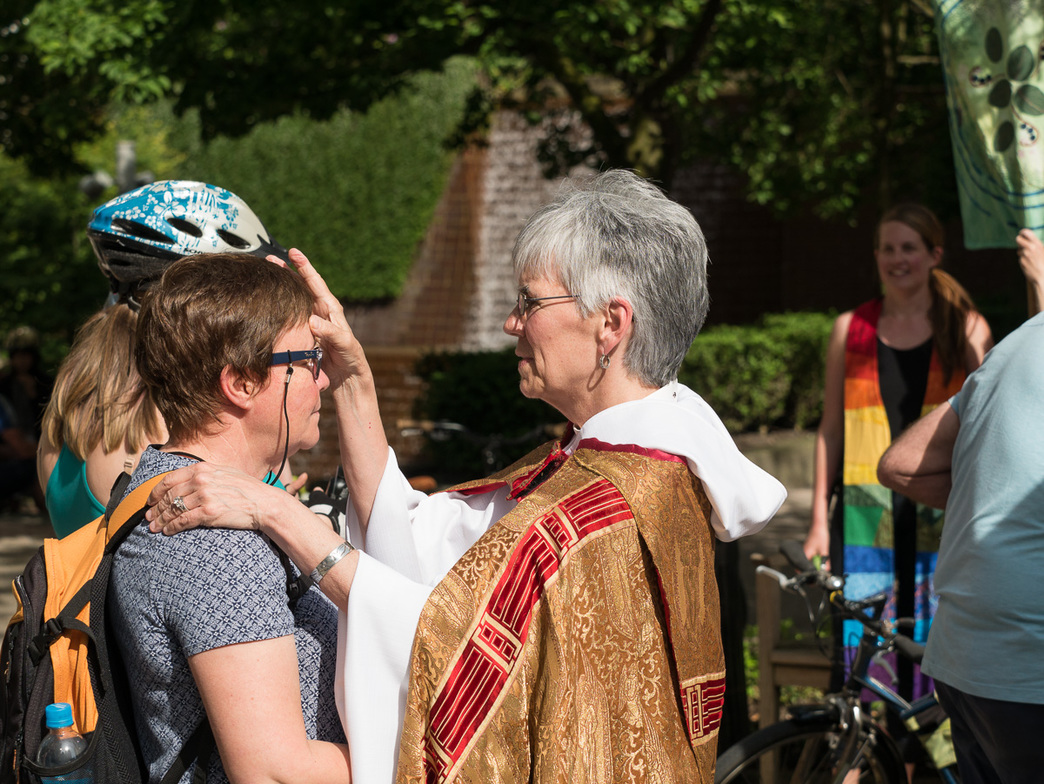 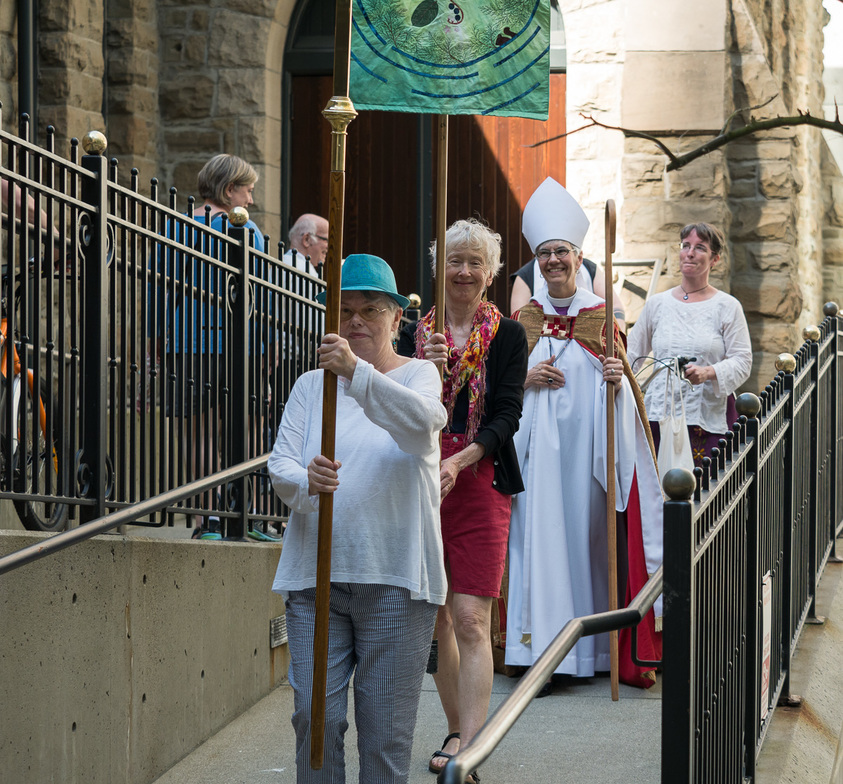 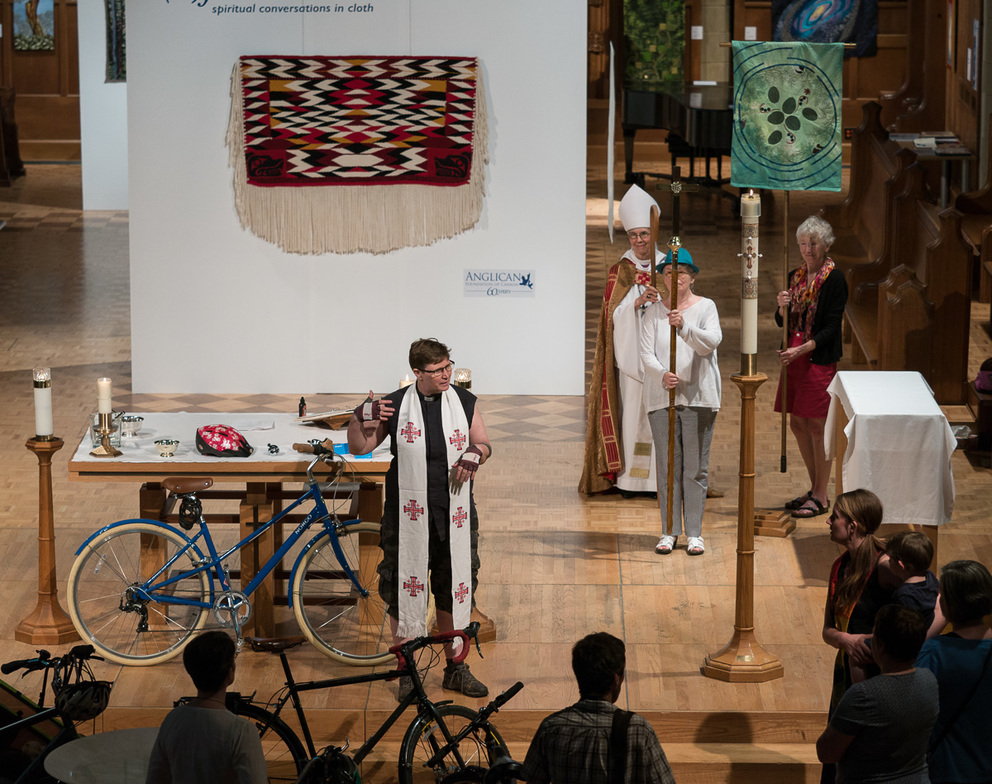 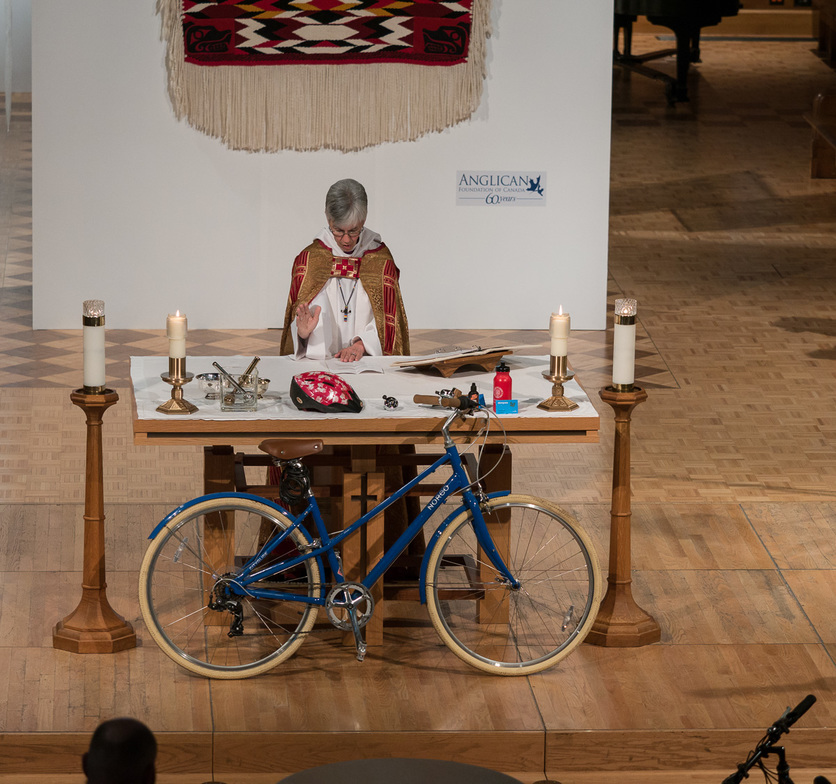 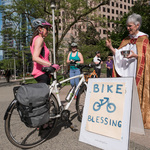 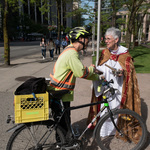 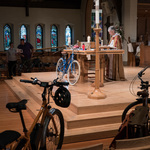 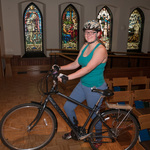 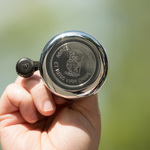 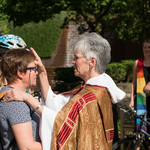 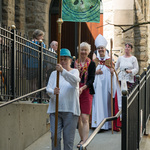 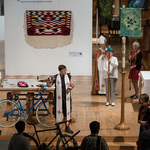 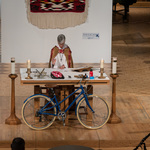 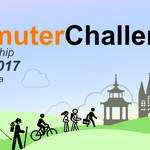 Vancouver’s Christ Church Cathedral has a new bell tower but the bells ringing in the 120 year old church on May 29th were attached to the handle-bars of bicycles. With sacramental chrism oil, bicycle chain oil, holy water and prayers, Anglican Bishop Melissa Skelton, two priests, and a United Church Minister blessed bicycles, transit passes, and a host of people who are making an effort to reduce the environmental impact of their commute to worship.

While light from the stained glass windows colored their faces, a congregation of about twenty-five listened to a passage from Ezekiel about the prophet’s vision of a wheel within a wheel and they prayed for the safety of cyclists, fossil fuel divestment and the victims of climate disasters and wars for oil.   Led by a cross and banners and the bishop with miter, crozier and cope, cyclists and pedestrians processed out of the church to a hospitality station on the street where they offered coffee, snacks, bike maps and “ride-by blessings” to commuters on the bike route outside.

"Climate justice is core to my faith but cycling to church is not just transportation; it's meditation, the real beginning of my worship," said Chris Boyle, United Church Minister and organizer of the divestment group Fossil Free Faith.

Organized by Fossil Free Faith and Salal + Cedar, an Anglican environmental church, the event was a kick-off to the Faith Commuter Challenge. In 40 communities from Halifax to Vancouver, faith groups are celebrating their care for creation and logging their trips by bus, bike and on foot to places of worship. Environmental engagement seems to be taking hold in religious and spiritual organizations.   People of faith across Metro Vancouver have been raising their voices against the proposed Kinder Morgan Pipeline, and the expansion of other fossil fuel projects, citing a religious responsibility to be better stewards of creation. All of these actions are in line with Pope Francis' controversial encyclical released two years ago, Laudato Si, in which he calls for the economy to be restructured around a moral obligation to tend to the earth and to one another.

Find out how you can participate in the Faith Commuter Challenge.