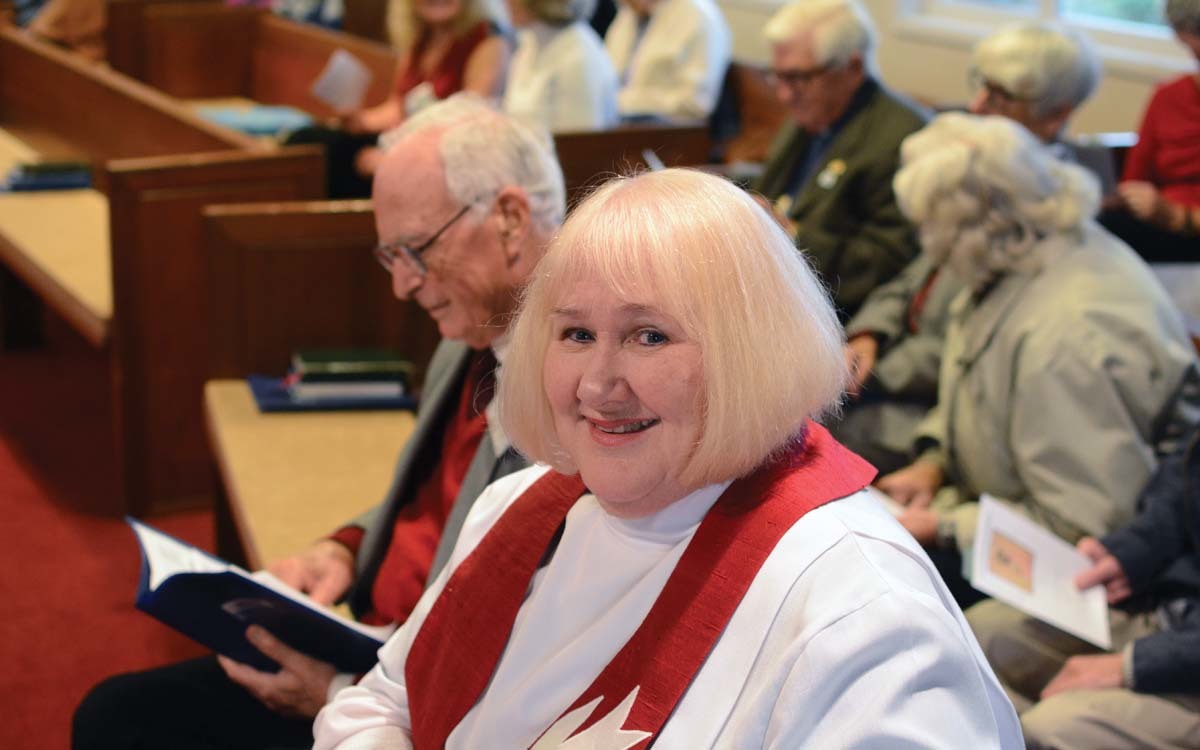 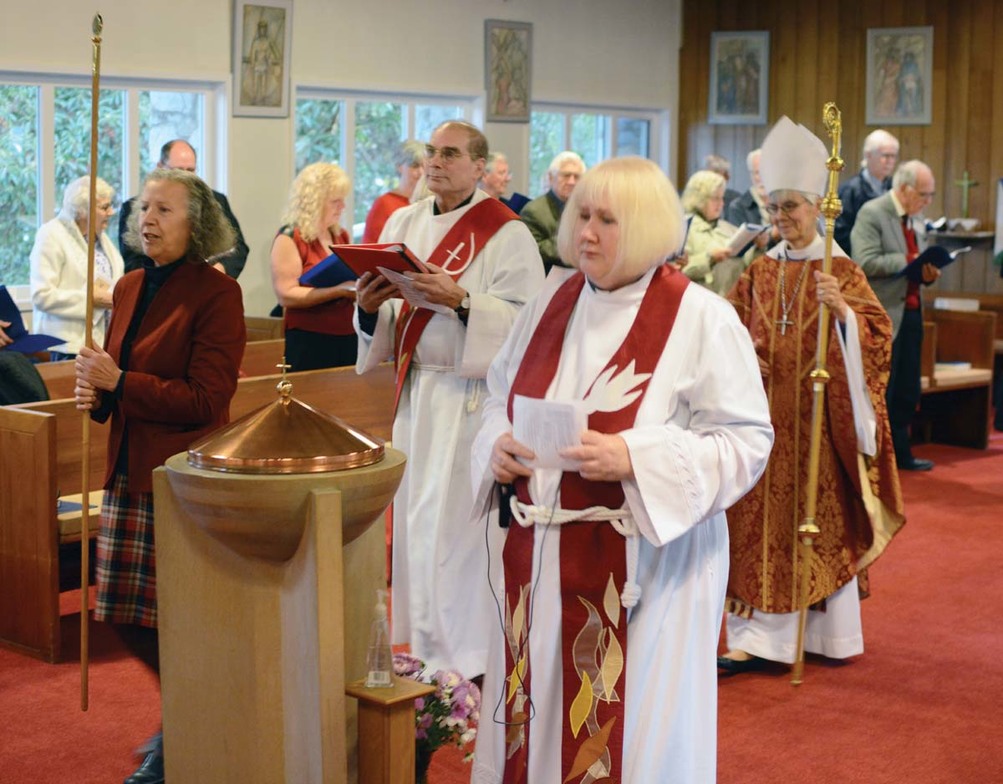 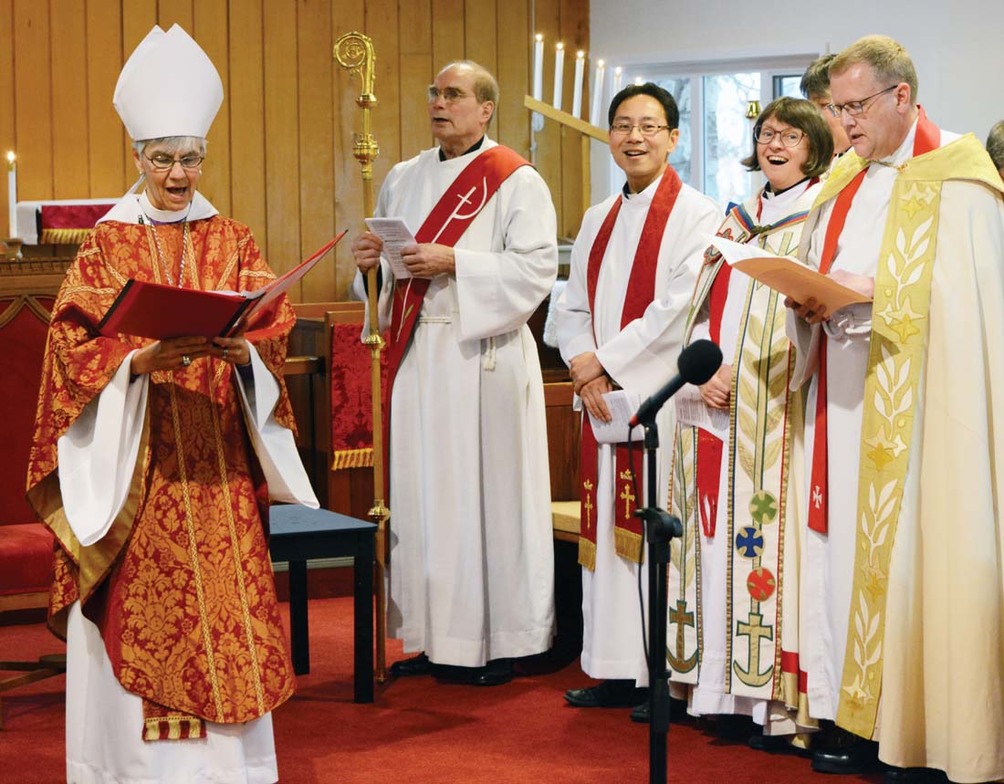 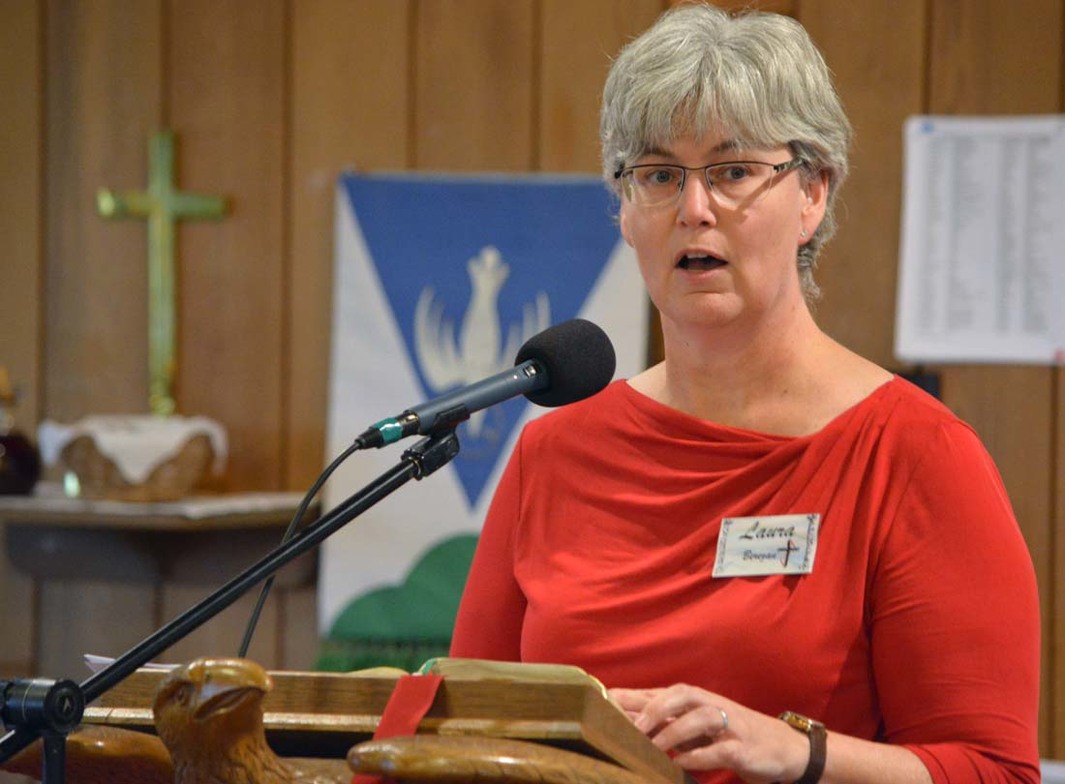 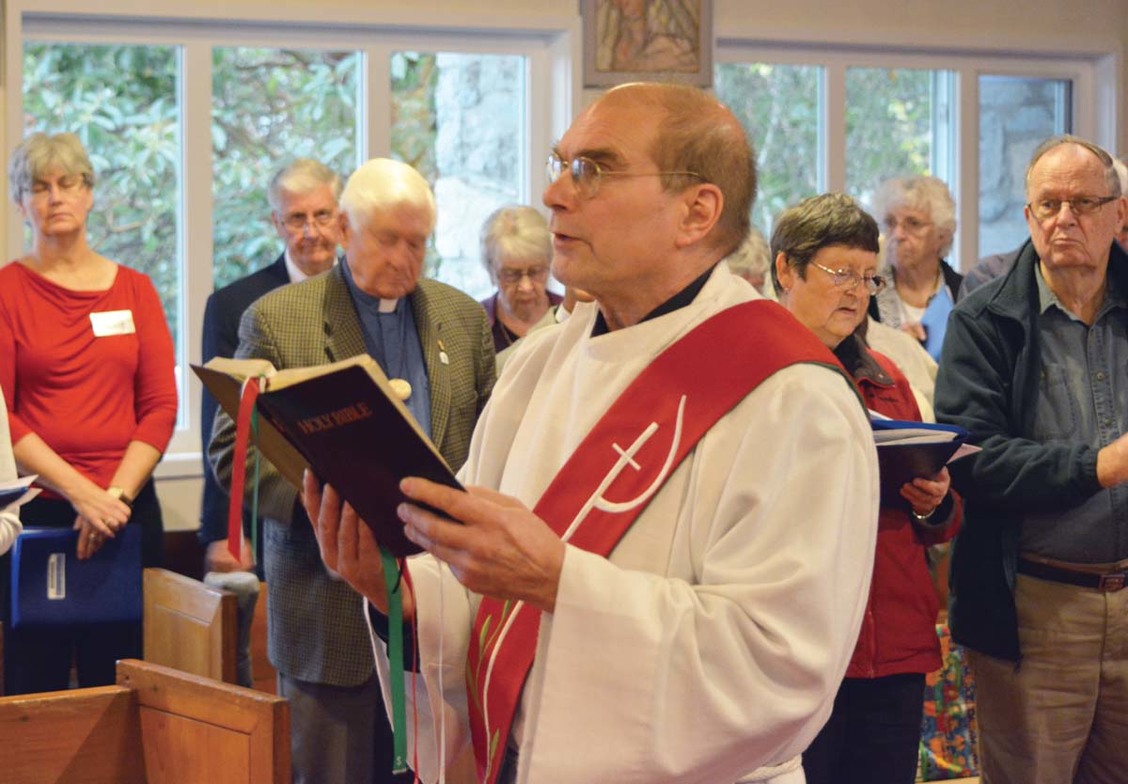 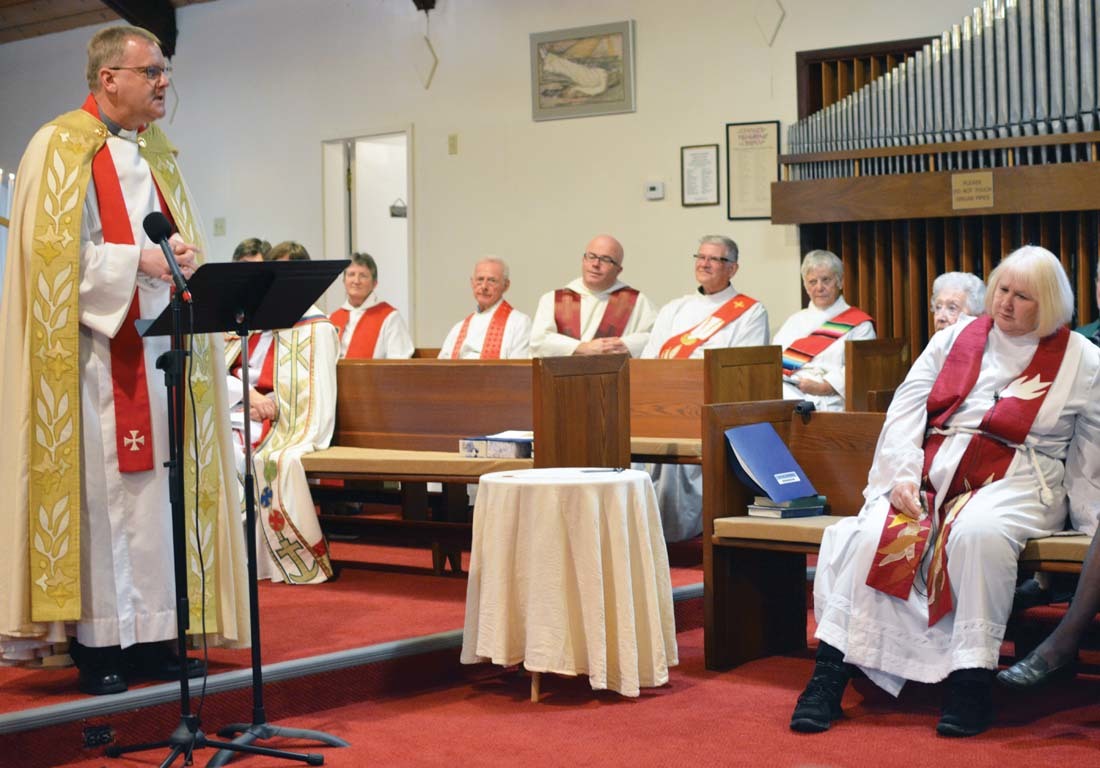 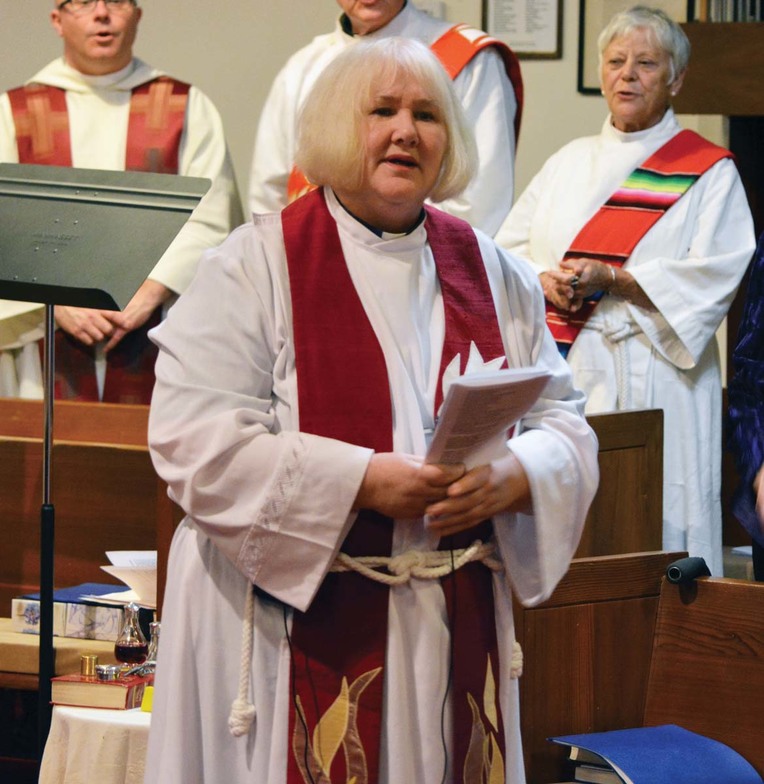 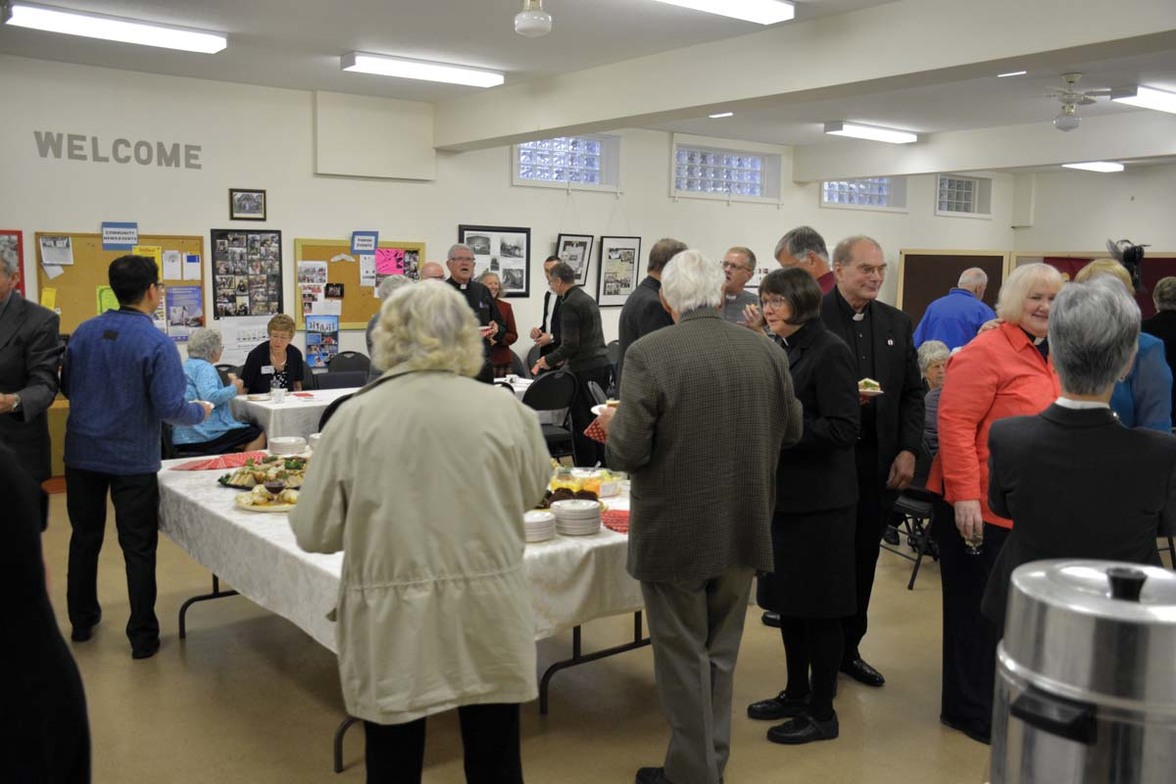 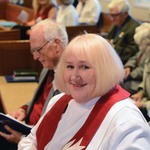 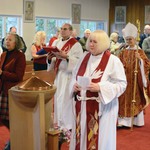 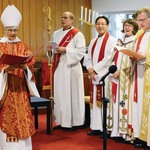 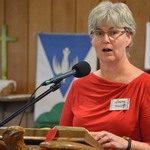 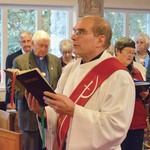 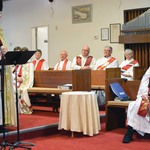 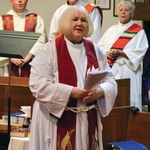 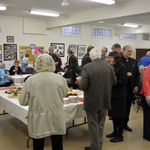 The Induction of the Reverend Faun Harriman as Vicar of St. David and St. Paul, Powell River.

A number of folks from the diocese not resident in Powell River gladly made the trip on Monday, October 24, 2016, to participate in a Celebration of a New Ministry that would officially install the Reverend Faun Harriman as vicar of the diocese’s most remote parish, St David and St. Paul.

The Reverend Faun Harriman came to the Diocese of New Westminster from Ontario more than a decade ago to be rector of St. Alban the Martyr, Burnaby.  Her years at St. Alban’s were spirit-filled and productive as Faun’s outgoing style meshed well with the prevalent can-do attitude of the St. Alban’s leadership. Even the June 2015 fire that caused over half-a-million dollars damage to the 107 year old building could not put a damper on the parish’s energy and purpose. During that incumbency she also took on some diocesan responsibilities:  regional dean, registrar and organizer of clergy conferences, and she was the principal facilitator and advocate for Fresh Start, a program that helps acclimatize newly appointed clergy and help them as they adjust to new congregations, new opportunities and new challenges.

Bishop Melissa Skelton, Executive Archdeacon, the Venerable Douglas Fenton, and Archdeacon of Capilano, the Venerable Lynne McNaughton all made the trip to Powell River from Vancouver the morning of October 24th. They were met at Horseshoe Bay by Marilyn Chambers and Ina-Mae Reed, parishioners at St. Alban, Burnaby,  and further down the road were met at Sechelt by Faun’s dear friend and former deanery colleague, the Reverend Dale Yardy, rector of Holy Trinity Cathedral and the Reverend Clarence Li, rector of St.Hilda, Sechelt and Regional Dean of the Sea to Sky Deanery.  Already present in Powell River were the preacher for the liturgy, the Venerable Stephen Rowe, Archdeacon of Fraser and his wife, the Reverend Christine Rowe, Assistant to the Rector at St. Mary’s, Kerrisdale.

The liturgy itself pretty much followed the pattern of the standard induction Eucharist with: the Bishop’s presentation of the new vicar, the Collect, the selections from Scripture and prior to the Covenant in Ministry, the sermon.

The Venerable Stephen Rowe did make reference and did draw parallels from the material contained in the Epistle (Acts 15: 12-22a) and the Gospel (Matthew 13: 53-58) but a good section of his address focused on last year’s diocesan communications coverage of Heiltsuk First Nation carver, Ivan Rosypskye’s transformation of a stump on the grounds of the church (now identified as the Sycamore Commons Permaculture garden) into a beautiful and meaningful carving which has become in Archdeacon Rowe’s words, “a very potent symbol of how all our work in the church should happen; through invitation, through mutual respect, through learning and sharing.”

Later in the sermon he made reference to Faun, “it is not my purpose today to tell you all about Faun. First of all she has been with you for almost two months (Faun began her ministry appointment September 1) so you have an idea already. Secondly, Faun is quite capable of telling you all about herself; she doesn’t need any help from me. That said she is someone with a real heart for the Anglican Church of Canada and parish ministry. She is also a very loyal person who yet speaks the truth as she sees it. Faun is a little on the extrovert side but still listens and is so wise in her counsel.”

(The full text of Archdeacon Rowe’s sermon is available here)

The liturgy continued with the Covenant in Ministry: the description of how the new priest was chosen; the administration of the Oaths and Subscriptions; the answer “I do” to Bishop Skelton’s question, “Do you, in the presence of this congregation, commit yourself to the responsibility entrusted to you?” ; the presentation of the Symbols of Ministry of the Whole People of God (Bible, water, oils for  healing and blessing, Canons of the diocese, keys to the buildings, prayer and hymn books, and the bread and wine of the Eucharist); and the Welcome with applause. The Covenant then flowed into the heart of the worship:  the Intercession; the Offertory, the Eucharist; the Blessing; and the Dismissal.

After the Dismissal with Faun leading the way, the 75+ gathered for this mid-afternoon weekday worship formed a circle in the sanctuary, held hands and sang,  “May the Lord bless you. May the Lord keep you.  May the Lord’s radiant smile always shine on you.” And as the last notes of this Song of Blessing echoed in the nave, members of St. David and St. Paul, visitors and friends, ecumenical partners, a substantial number of the ordained leadership of the Diocese of New Westminster, and the new inducted vicar went down the stairs to the hall for wine, sandwiches, cake and conversation, to enjoy some time together before returning to their homes. For some that would be the 180 kilometres back to the diocesan offices, for others, just down the street.

(This article is an edited and condensed version of the feature article that will be published in the December 2016 issue of Topic, the monthly publication of the Diocese of New Westminster)