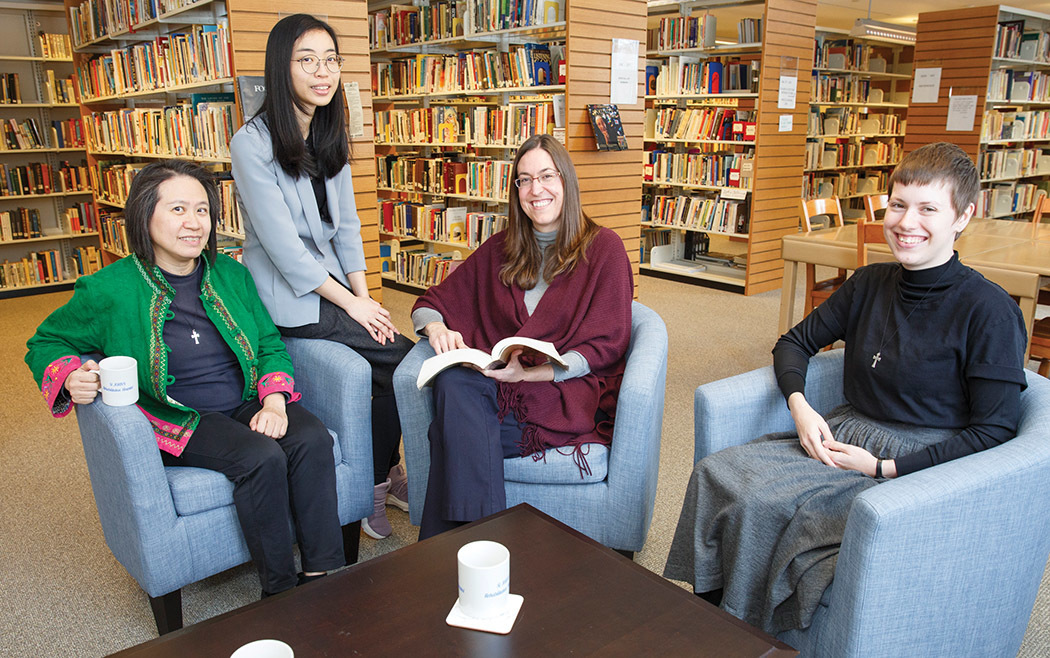 One is a music therapist, recently graduated from Wilfred Laurier University. The second is a spiritual director from Hong Kong. And the third, from Lethbridge, Alberta, is discerning a call to the religious life.

Three women from different backgrounds, but with one thing in common: they are all spending a year living and working at the Sisterhood of St. John the Divine’s convent in Toronto.

Since 2016, the sisterhood’s Companions on an Ancient Path program has offered a spiritual gap year to women over the age of 21. Fifteen women from across Canada and overseas have participated in the program, and applications are open for the 2020-2021 cohort.

“One of the real gifts of this program is that it opens up space in a woman’s life to think, to experience, to create community, to deepen one’s faith or maybe struggle with faith,” says Shannon Frank-Epp, the program’s assistant coordinator. “A lot of women come here and say, “I don’t know what I believe anymore.” And this is a safe space to go deeper.”

While at the convent, participants – called “companions” – live, work, pray and learn alongside the sisters. Their room and board is fully paid for by the sisterhood, a Canadian order that was founded in 1884. The sisterhood has received generous grants from the Diocese of Toronto’s Our Faith-Our Hope campaign to fund the program.

Sr. Constance-Joanna Gefvert, coordinator of the program, says the gap year isn’t a recruitment tool for the sisterhood, although a couple of companions have joined the order. “The purpose of it is to help women deepen their spiritual lives and have the tools they need to live a discerning Christian life and a life of discipleship,” she says.

Companions need not be Anglican. Many have come from different denominations, including the Pentecostal and evangelical traditions. They have often been referred to the program by their parish priests, chaplains or friends.

For Jasmine Lo, 25, the experience has grounded her in her faith and provided her with valuable work experience. A music therapist, Ms. Lo helps patients at St. John’s Rehab, a hospital located next to the convent that was founded by the sisterhood and is now part of Sunnybrook Health Sciences Centre.

“Being here, I feel really privileged,” she says during an interview at the convent. “We have a sense of peace and a time to be open to God.”

Halfway through the year, she says she has learned a lot about herself. “It has nurtured me. I’ve learned that it’s important to just be myself, to be authentic in my therapy practice as well as my faith journey.”

Born in Vancouver and raised in Hong Kong, she hopes to return to the former British colony to help those who have been traumatized by the ongoing protests and riots. But she’s keeping an open mind. “This is a really interesting journey that I’m on and I look forward to where it is going,” she says.

Florence Au, 55, says the pace of life at the convent is a world away from her busy life in Hong Kong. “It can be sort of hectic here, but in a nice way that grounds you. You aren’t attached to work all the time, like you can be in your other life. Whatever you are doing here, you have to stop and go to prayer. God is at the centre of everything.”

A spiritual director back home, she has been able to apply her skills at St. John’s Rehab and the convent’s guesthouse, where people often stay for retreats. She says living alongside the sisters has been a unique opportunity.

“I can see God through the sisters,” she says. “I can see how they age so gracefully and how wise they are and how they live with one another.”

She encourages other middle-aged women to apply to the program. “You need to embrace change, whatever stage of life you’re in. It’s harder when you’re older, but you have to try. Some things I don’t want to change in my life, but it’s good to be open to possibilities.”

Kelsea Willis, 24, is on her second year in the program and is discerning a call to the religious life. “I was very comfortable with the sisters and they were comfortable with me,” she says, recalling her first year. “It felt that I wasn’t ready to go when the time came, that there was more to be explored here and more to do.”

Her parish priest recommended the program to her. “He said, ‘I think this would work for you.’ It was in line with some discernment that I was going through at the time, but I didn’t know how much fruit it would bear.”

As it turns out, it would bear a lot. Ms. Willis beams as she describes her life at the convent. She is the sacristan at St. John’s Rehab’s chapel, assisting the chaplain, the Rev. Canon Joanne Davies, and also helps out in the convent’s chapel. “I’ve really enjoyed living intentionally and always with the sisters, praying with them and being a member of the community. They are great women, and they are my friends now.”

She encourages other women to give the program a try. “Go for it. If it feels right, you’ll know. I’ve learned that if there’s something you really want to do, and you feel that it’s the right thing to do even though you have to change your entire life to do it, it’s worth doing.”

For more information about the Companions on an Ancient Path program, email Sr. Constance Joanna Gefvert at or visit www.ssjd.ca.