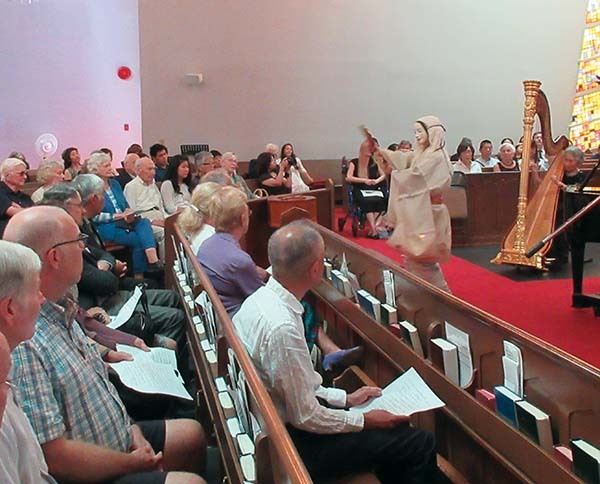 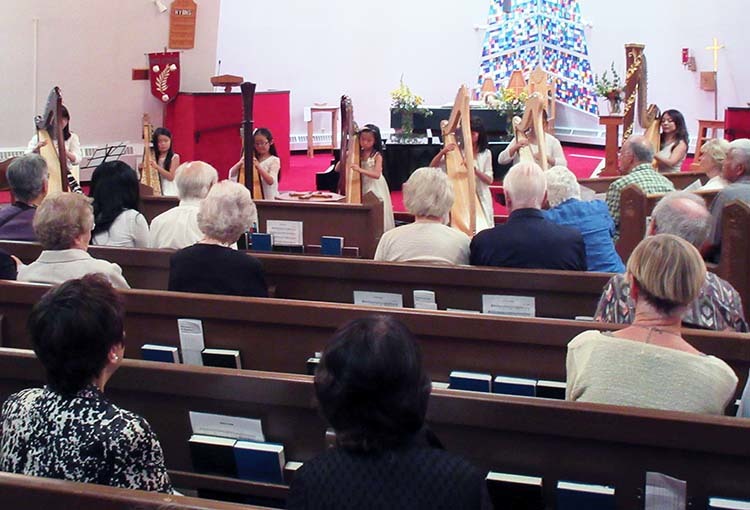 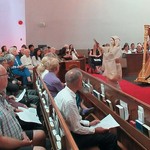 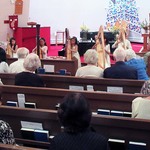 A moving tribute in harp and piano music was performed at St. Stephen’s West Vancouver on Saturday, August 18 to honour the memory of Conrad James Adams (father of Canadian musician/singer/songwriter Bryan Adams). His widow, Hiromi Adams, a professional harpist herself, coordinated the event that involved eight harpists and two pianists. It was introduced by Yayoi Hirano dancing an excerpt from Japanese Noh theatre representing the spirit of the deceased. Wearing traditional white robes and a white wooden mask Hirano slowly embodied the soul of the departed, and used a fan to suggest the passing of time, punctuated by the dropping of white blossoms delicately falling to the ground. She was accompanied by Hiromi Adams playing traditional Japanese folk melodies on her harp.

The first selection was a piano solo of Chopin’s "Nocturne #20" played by Noriko Imai, followed by Noriko Imai and Noriko Adachi performing a moving transcription for two pianos of the "Intermezzo from Cavalleria Rusticana" by Mascagni; and later "Radetzky March" by Strauss.

Kaori Otake who had flown in especially from Japan for the tribute memorial presented two harp transcriptions: Smetana’s "The Moldau and Carnaval of Venise" by Godefroid. St. Stephen’s Minister of Music, Dr. Annabelle Paetsch then added to the musical extravaganza by presenting a piano duet with Noriko Imai, an excerpt from Faure’s "Dolly Suite", and a solo number, Brahms’ "Ballade in G Minor".

Miya Otake played a harp solo by Rossini and joined Kaori Otake for Debussy’s "Clair de Lune". Then all eight harpists, ranging in ages from students of 8 to their mature elders, their professional teachers, grouped together for a harp ensemble: "Habanera Gris" by Ortiz.

A reception followed in St. Stephen’s lounge hosted by St. Stephen’s rector, Canon Jonathan LLoyd. The proceeds were donated in Conrad James Adams’ memory to Lions Gate hospital and St. Stephen’s Anglican Church. In his career, Mr. Adams was a senior Canadian diplomat and UN Officer. He helped many new Canadians settle into Canada, including two of the harpists performing that afternoon.

Two scenes from the Concert