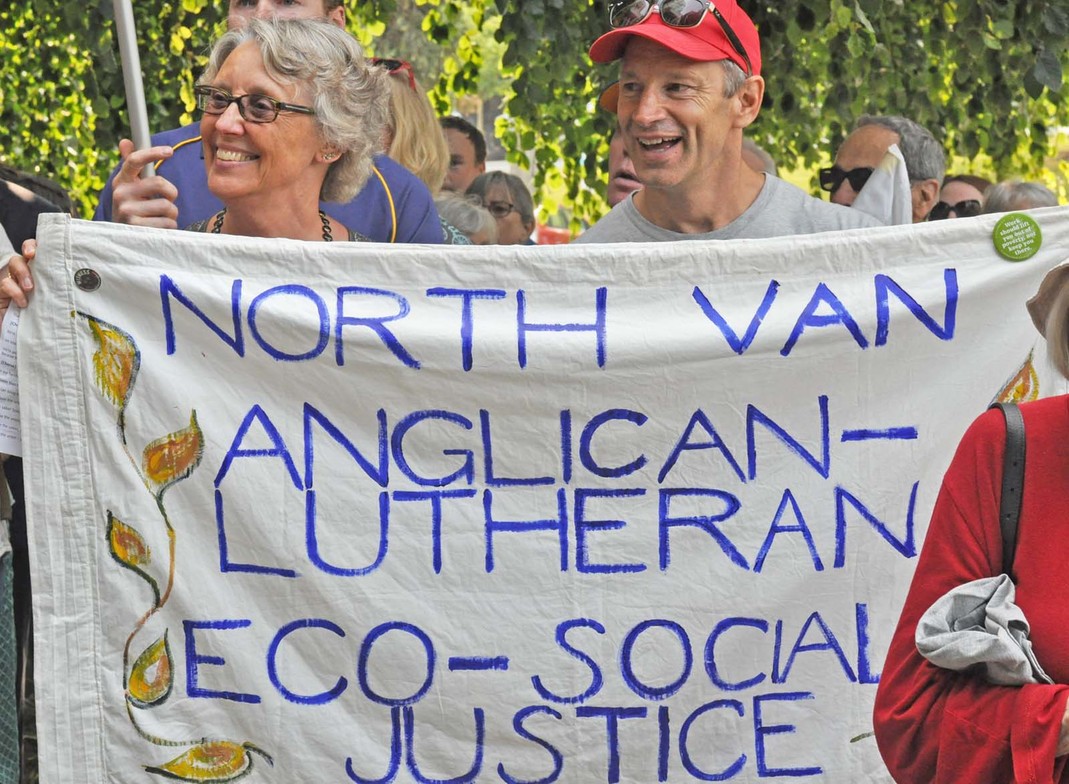 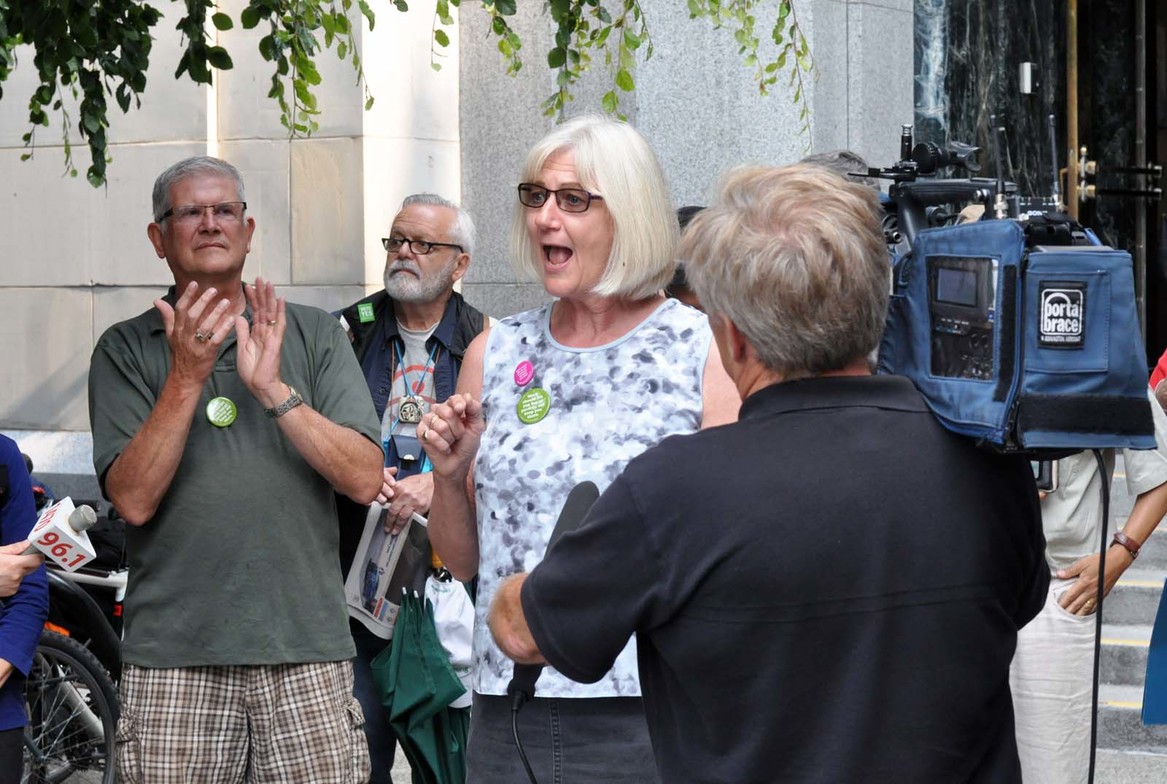 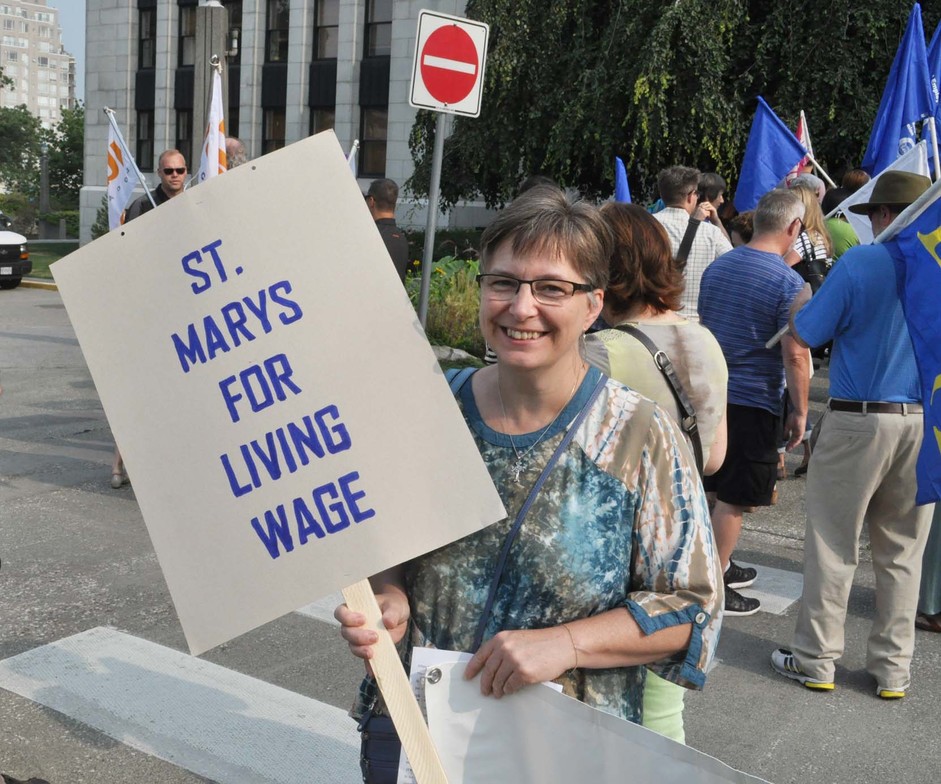 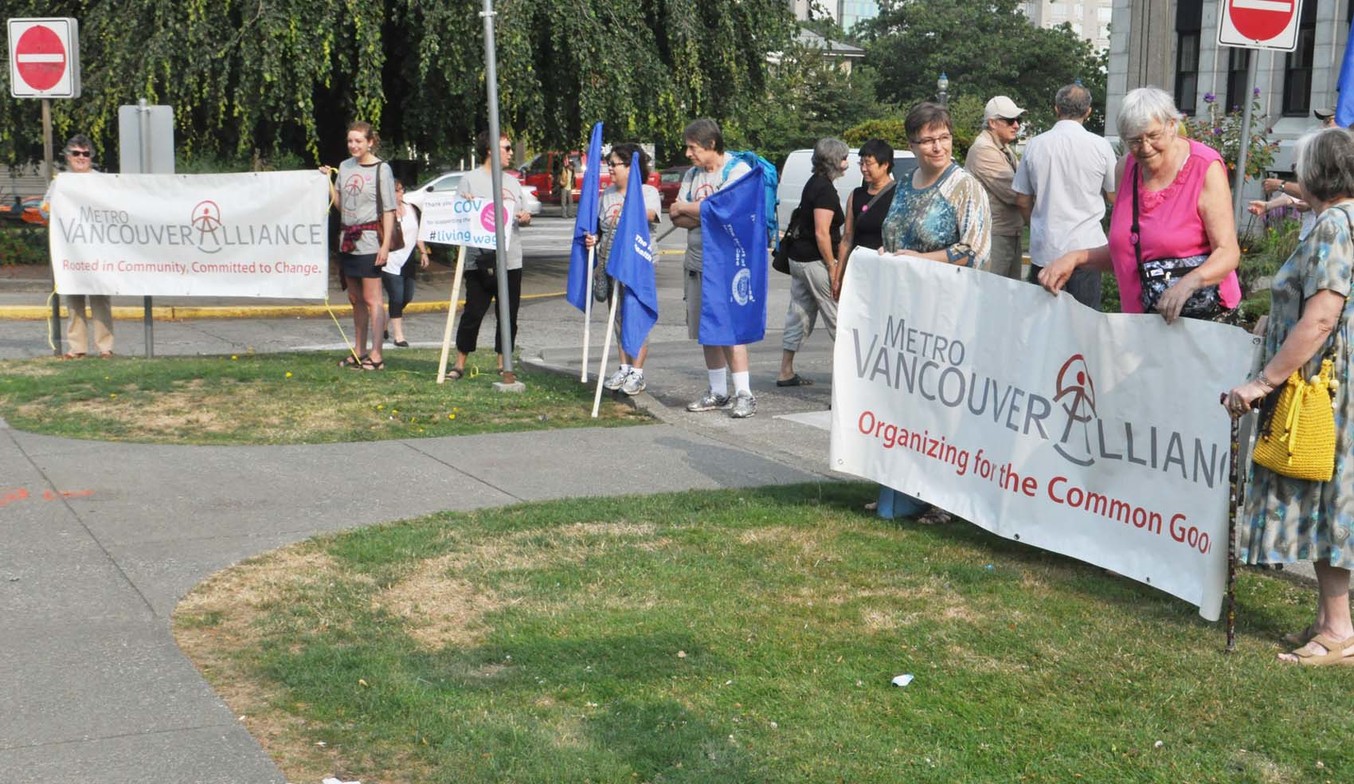 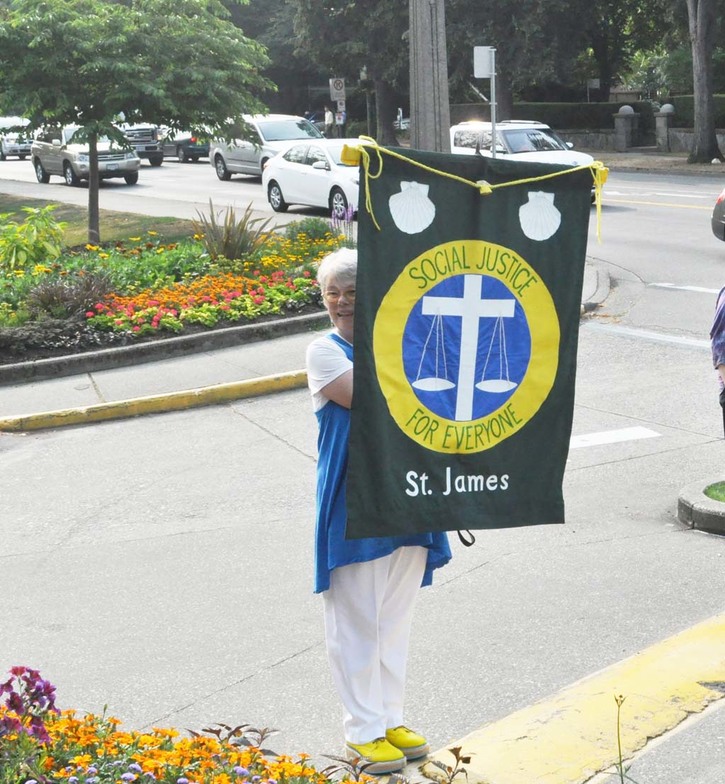 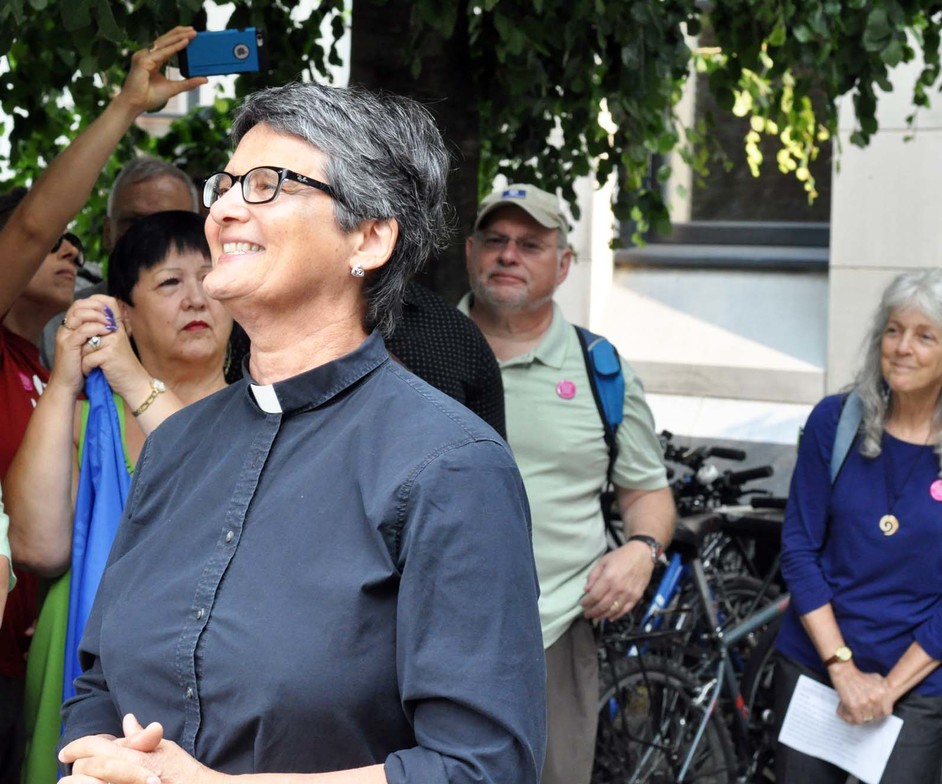 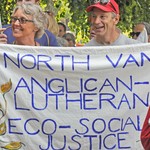 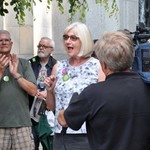 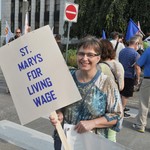 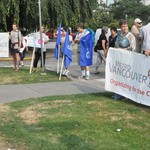 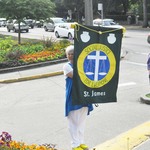 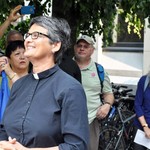 At 9am on Wednesday, July 8, 2015, living wage advocates gathered at Vancouver City Hall to support a motion to Council calling on Vancouver to be a Living Wage Employer. On behalf of Bishop Skelton, the Reverend Margaret Marquardt, chair of the diocesan Eco-Justice Unit who is also in leadership with Metro Vancouver Alliance (MVA), one of the principal organizing groups for the rally presented a statement from the Bishop to the Standing Committee on City Finance and Services.

The living wage is the earnings two parents with two young children need in order to cover their basic family expenses, with both parents working full-time and both making the living wage. In Metro Vancouver the living wage is $20.68 per hour. This calculation by the Living Wage for Families Campaign, is reached by combining hourly pay rates with the dollar value of any employer paid benefits.

Prior to the July 8 Council meeting, 100-125 people from more than two dozen organizations gathered on the Vancouver City Hall grounds with signs and banners in enthusiastic support of Vancouver becoming a Living Wage City. A good 20 percent of those in attendance were people affiliated with parishes of the diocese of New Westminster including representatives of: St. James’, St. Anselm’s, St. Laurence, St. Mary’s, Kerrisdale, St. Catherine’s, Capilano, St. Clement’s, Lynn Valley and Christ Church Cathedral.

One of the MVA organizers quipped that of the two battery powered megaphones brought to the rally, two were not functional so that meant the crowd had to listen carefully. Deborah Littman, the lead organizer for MVA took on the role of informal MC. The Reverend Margaret Marquardt got the crowd going by enthusiastically proclaiming, “Justice is Good!” President of the BC Federation of Labour, Irene Lanzinger gave a stirring five minute speech reminding the crowd that the current minimum wage in BC that was championed by the BC Fed is a stepping stone to achieving the Living Wage for people in BC and that we should celebrate the progress that has been made and look forward to more income equality progress in the future.

Here is the motion that Rev. Marquardt and Bishop Skelton prepared for Council:

The Rt. Rev. Melissa Skelton, Anglican Bishop, the Diocese of New Westminster     Regarding: The Vancouver City Council motion on the Living Wage, July 8, 2015 Mayor Robertson and Members of Council. Text in quotations are Bishop Skelton’s words.   “Today, I have asked The Rev. Margaret Marquardt, Chairperson of our Anglican diocesan Eco-Justice Unit to be present on my behalf. She is standing in for me today bringing my message to Council regarding the Living Wage motion.

It is a privilege to speak to Council today regarding the motion on the Living Wage, as economic justice is at the root of the Christian gospel. It is an honour to be able to support this motion and the message it sends regarding our city’s commitment to addressing economic well-being for those employed directly and indirectly by the City.

We hear a great deal these days about the many who cannot afford to live in this city where they work. For those struggling to stay, housing costs are eating into a greater and greater percentage of their income. They are going into debt as they use credit to buy food for their family. This motion on the Living Wage makes it clear that Vancouver City Council is taking a lead in making Vancouver a livable city! It is a sign to the wider community that paying people a livable wage…one that keeps them out of poverty…this is the right thing to do.

So many are struggling day to day to make ends meet with the ongoing stress this causes in families physically, emotionally, spiritually and economically. This is a vital issue before all of us. “

Here I can speak as the Chairperson of the Eco-Justice Unit of the diocese.

I have heard many stories personally of the great struggle of those who are paid low wages. I have heard from members of parishes and folks we meet day to day. We meet families damaged by the constant stress of living in poverty. An example is of a family of six (6), composed of two sisters with their husband and 2 baby girls sharing a two bedroom apartment. They cannot afford anything more. It is daily worry to make ends meet.

The value of this initiative of the Living Wage is that it sends a message to our wider community that it is possible to pay a Living Wage and the benefits back to all of us are immeasurable.   There is a passage from the prophet Jeremiah (Jeremiah 29:7) in the Jewish scriptures that is compelling. “Seek the well-being of the city, for in its well-being is yours.” This is true for all of us as we attend to a living wage for citizens. We all receive the benefit of being in a livable city!

Bishop Melissa has spoken clearly...as she reminds us “that it is our responsibility to stand with those who are struggling and to show that we mean to do something about it. This motion on the Living Wage is a way towards this end!   At this time our Anglican Diocese of New Westminster has also embarked on a process regarding the Living Wage. At our recent annual gathering in May, 2015, we passed a motion to explore what it would mean as a diocese to become a living wage employer. So we too are doing the necessary work in this area.

It is a way that we join with this City Council and all other institutions seeking to address the issue of poverty among our employees.

Today is an important day! Passing this motion is a way that leadership will be shown …as this Council joins with New Westminster City Council with their Living Wage policy…a way forward to the wider community that all of us joining together are committed to poverty reduction and healthy communities.”

Later that morning, Council received the motions and other statements with enthusiasm and unanimously passed the Living Wage Motion for the City of Vancouver. The MVA Press Release announcing the successful motion is available for download below.