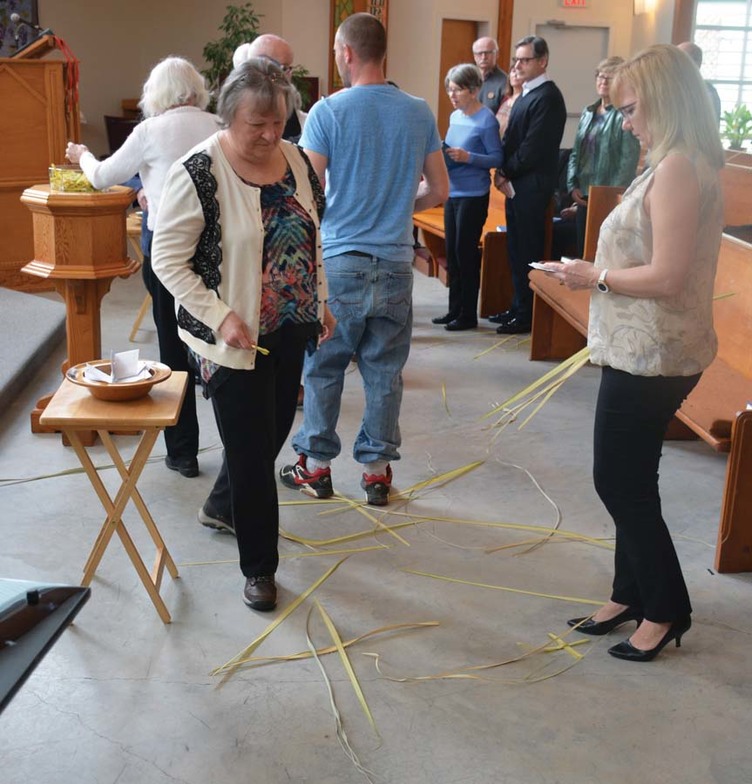 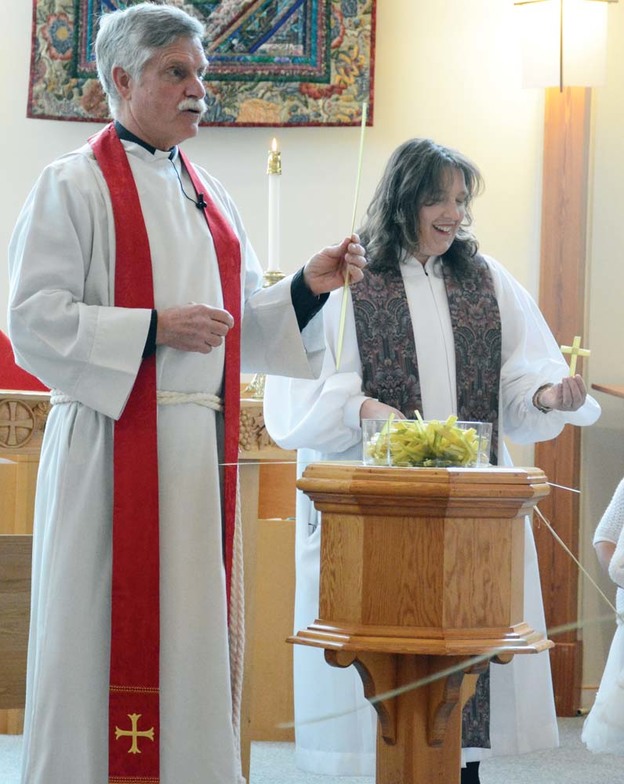 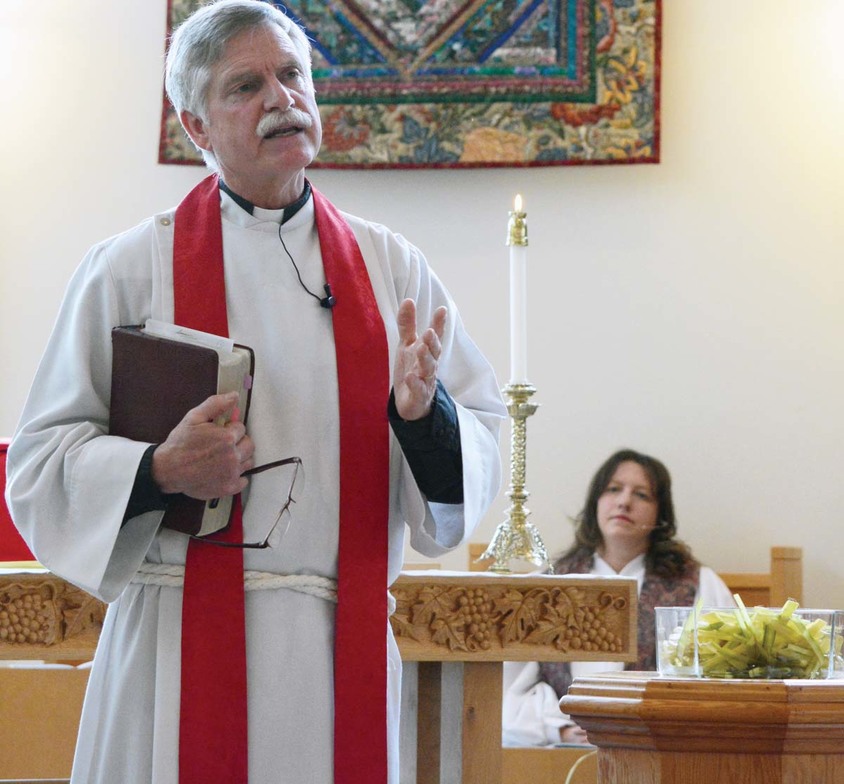 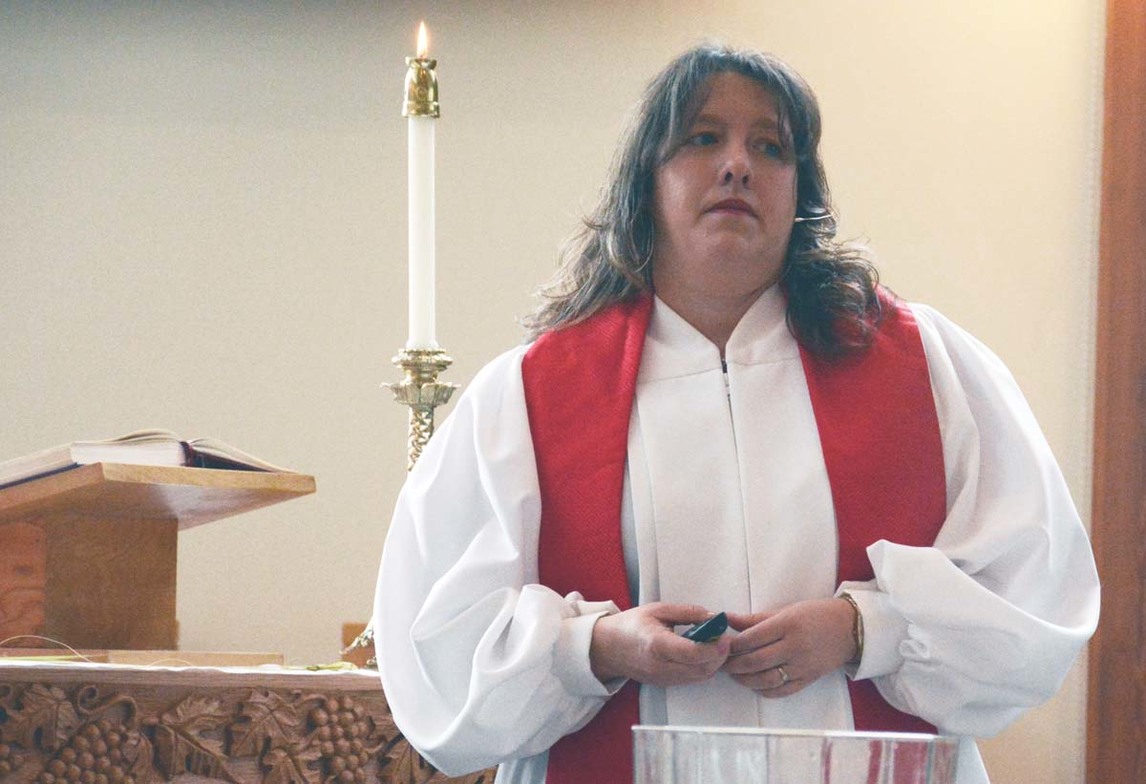 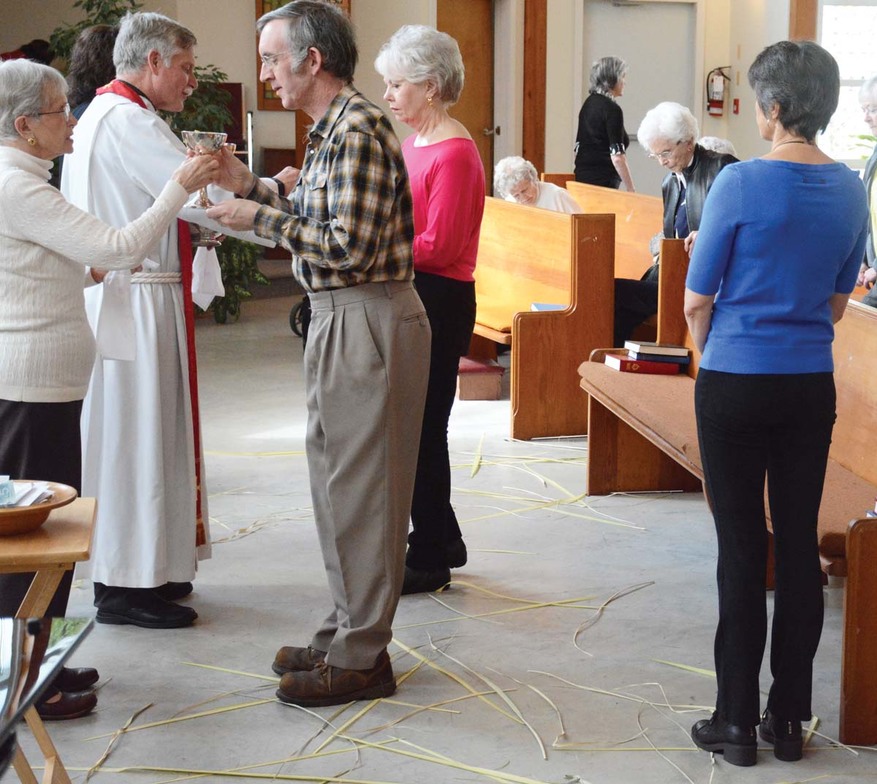 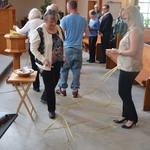 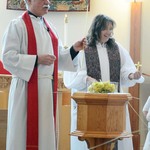 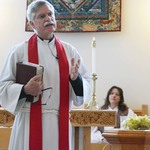 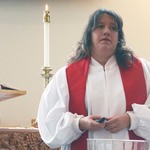 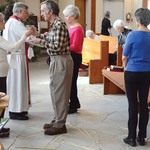 Diocesan Communications began the annual Holy Week tour of the D of NW with a Palm Sunday Eucharist at St. John the Divine, located in the Garabaldi Highlands area north of Squamish.

We were warmly welcomed by the vicar, the Reverend Nick Parker and the St John’s faith community, which also includes the folks from Squamish United Church and their minister, the Reverend Karen Millard.

By 9:50 pm many of the seats in the nave were filled with worshippers from both congregations and the church was near capacity by the commencement of worship at 10 am.

Prior to the Call for Worship and the Processional Hymn, All Glory, Laud and Honour, Rev. Parker described what would be taking place during the liturgy with a specific focus on the Offertory. Everyone in attendance that morning were met by greeters who distributed palm fronds, during the Offertory we walked up to the chancel entrance and dropped the fronds on the floor stepping on them with intention (the content of Rev. Parker’s sermon supported that action), placed our offering in a plate and chose a new palm cross from a bowl on the font.

Following the Collect, the Reverend’s Parker and Millard presented a brief lesson on creating palm crosses out of the long, wispy palm fronds. This is where the cultural difference in the two denominations manifested itself with Rev. Parker, an experienced palm cross maker demonstrating in less than a dozen steps the complete process, however, Rev. Millard’s attempt was unsuccessful which produced some giggles from the congregation and self-deprecating laughter from Rev. Millard.

In his homily, Rev. Parker spoke openly and honestly about his own personal struggle with Palm Sunday and the journey through Holy Week. He placed this struggle within the context of his personal self- esteem and that “a human being is a question that has no answer…we are who we are.”  He explored the paradox of going from the “party” atmosphere of Jesus entry into the city on Palm Sunday, and our desire to move right on to the next “party” which is the Celebration of the Resurrection on Easter Sunday without considering what goes in between. But “God understands the dichotomy of our humanness that we shout ‘Hosanna’ one moment and then soon after we shout ‘Crucify Him’.” To put ourselves in that place where Jesus was, “to give it up…to accept the love that knows no bounds…Palm Sunday is a wonderful Sunday but also a terrible Sunday, it points out the struggle that we all experience…for we struggle to love as Christ taught us and as God demonstrates with the giving of His Son.” In closing he reminded us that we not “go from party to party… there is a journey from Palm Sunday to Resurrection and the journey consists of washing feet, betrayal, humiliation, suffering and death.”

When the Prayers for the People led by St. John’s warden, Pam Tattersfield concluded , Rev. Millard removed her Lenten stole, a rich dark purple textile design and placed a plain red stole around her neck. Then she read the Passion narrative, Luke 23: 1-49. After she had read the Sripture, many from the United Church congregation left the sanctuary in silence and the Anglican congregation remained to celebrate the Eucharist.

More photos and captions are available by accessing this link to an album on Anglican Conversation, the Facebook page of the Diocese of New Westminster.