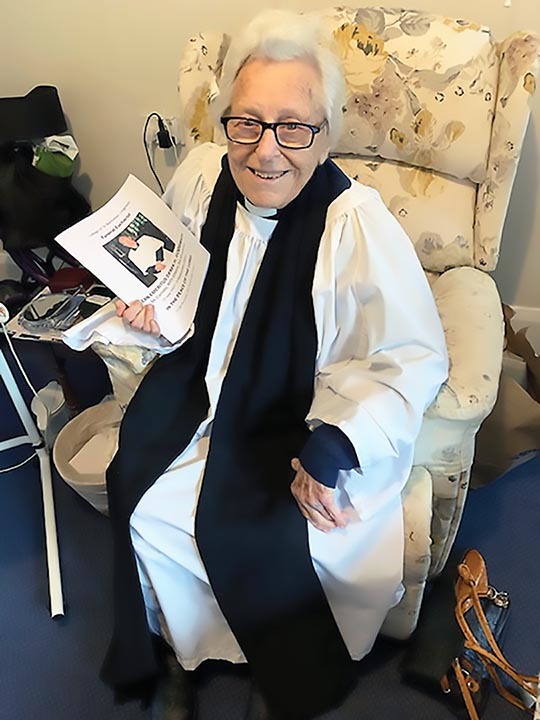 The Reverend Eve Wiseman died in Surrey, England on January 8, 2022, a short time after suffering  stroke. Eve is survived by her niece, Helen Clay of Caernarfon, Wales and nephew, Simon Clay of Vancouver.

Eve was born in Coulsdon, Surrey, England. She was baptized at St. Francis Church and confirmed at St. Andrew’s Church, both in Coulsdon.

As a child, Eve was awarded a scholarship to Purley County Grammar School for Girls. She studied for her school certificate and higher school certificate at London University, and went on to obtain a Teaching Certificate from Cambridge University, Homerton College. Her main subjects were physical education and educational psychology. Eve taught for four years on Cable Street in Stepney, London, in the school on which “To Sir With Love” was based.

Eve had a distinguished academic career. She obtained a Master of Education from Western Washington State College in Bellingham, WA, and an MDiv from the Vancouver School of Theology. She lectured and taught at CF Mott Training College in Liverpool, the University of Birmingham, UBC’s Faculty of Education, and was an associate professor at Western Washington University (WWU). In the 1970s she was considered one of the top ten experts in the field of movement education in the USA. Eve once said that “a child dancing is often worshipping God”. She also coached the women’s field hockey team at WWU. She served on the Senate at WWU and at VST. Eve often spoke at conferences and seminars around the world.

Eve was ordained to the diaconate in 1984, and to the priesthood in 1985 by Archbishop Douglas Hambidge. Prior to ordination she had been active at St. James, Vancouver and St. John, Shaughnessy. In the late 1970s she served as a lay minister at Nooksack Indian United Methodist Church near Bellingham.

After her retirement in 1996, she had a number of “House for Duty” appointments including Ullapool (Northwest Scotland) and Scotshouse (Eire) and as interim priest at the Parish of Thurso and Wick in the Scottish Episcopal Church in 2000 and 2001. She then settled more permanently in England where she occasionally presided and preached at St. John the Baptist, Hove, at her local church, St. Peter, Henfield at Terry’s Cross, West Sussex, and at The College of St. Barnabas, Lingfield, where she lived.

Eve was an avid gardener, a voracious reader, and she loved music and loved to sing.