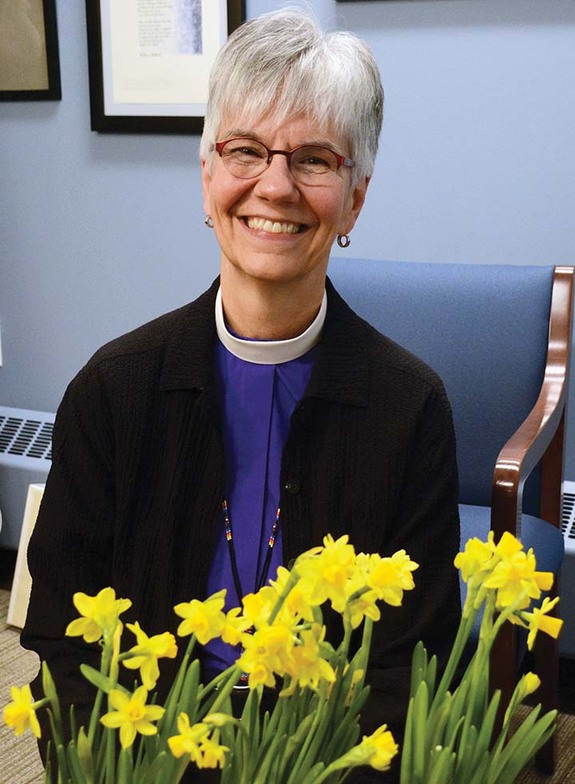 (Published in the April 2018 issue of Topic)

As I write this, snow is on the ground covering the many crocuses and snowdrops that were just popping up last week to remind us that spring is indeed on the way. Also as I write this, almost two weeks have passed since the deadly shooting at a school in Florida in which young people and teachers lost their lives.

It’s hard to know sometimes how much news from the US affects us here in Canada, and given the fact that I was born in the US, I don’t always trust my instincts on such things.  But as the news about the shootings in Florida spread, once again, Canadian after Canadian wanted to talk with me about it, about their perplexity at a society where access to guns, especially assault weapons, is so easy.  And they wanted to talk to me about their amazement and awe at the young survivors of the shooting who overnight began speaking up and demanding stricter gun laws.

In Mark’s account of the Easter story the women who come to care for Jesus’ body are confronted with an astonishing experience.  Rather than finding the tomb to be a quiet place to mourn and to tend to the body of their dead friend, a young man in a white robe tells them that Jesus is risen and is going before them to Galilee. He also tells them to go and tell others that Jesus is risen. Mark then tells us that in response to these words, the women are seized by two things: tromos (trauma) and ecstasis (ecstasy), and that, full of fear, they run from the empty tomb, not telling anything to anyone.

Scholars have been puzzled for many years about Mark’s ending, finding it, on the one hand, unsatisfying and, on the other hand, inexplicable given that the other Gospel accounts have more definitive affirmations or appearances of the risen Christ.

But, for me, Mark’s ending seems particularly appropriate for us today. For how many of us in the face of the trauma of the shooting in Florida would have had much to say about new life rising up out of it? Likewise, how many of us have much to claim about new life rising up from death as we continue the quest for answers about missing and murdered Indigenous women in Canada and as we hear the stories of women across the world in the “MeToo”s movement?

And so it seems to me, the silence of the women in Mark is understandable and real given what they had witnessed and given the very real silence that comes upon us all in the face of tragic and brutal circumstances.

And yet, look, some do find their speech in the place of fearful silence.

At the February 14th Women’s March mourning the loss of missing and murdered Indigenous women, elders and family members and friends carried photographs and in between the silences spoke the names of those loved and lost in the hope that we will not forget them. In the “MeToo” movement, women who have been afraid to tell what has happened to them, have been speaking up in the hope that the world can change in its treatment of women. And in Florida, we watch as young people, still fresh from their trauma, call out for changes that they hope will bring new life, all with a kind of ecstatic energy that comes when the silenced and the fearful give voice to the truth and the hope that is in them.