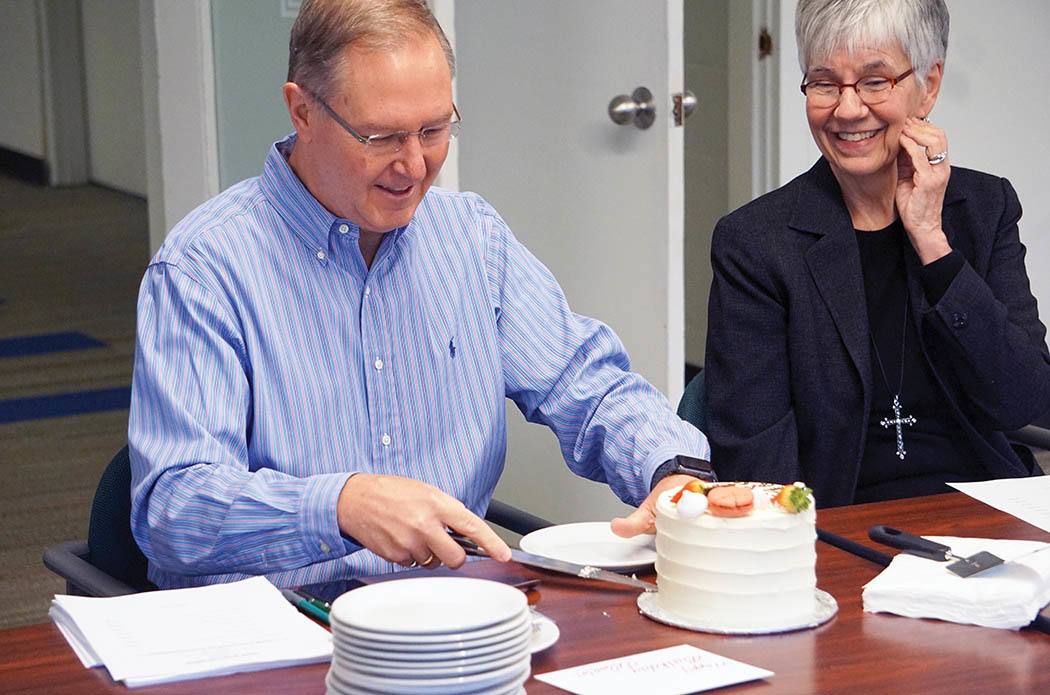 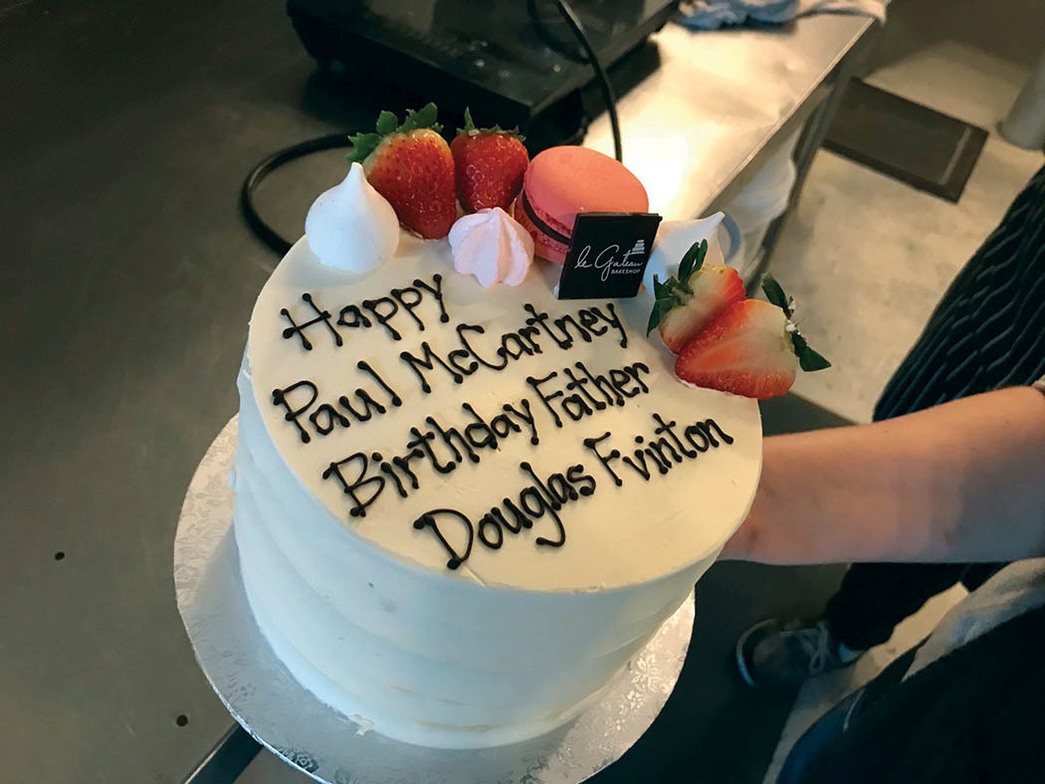 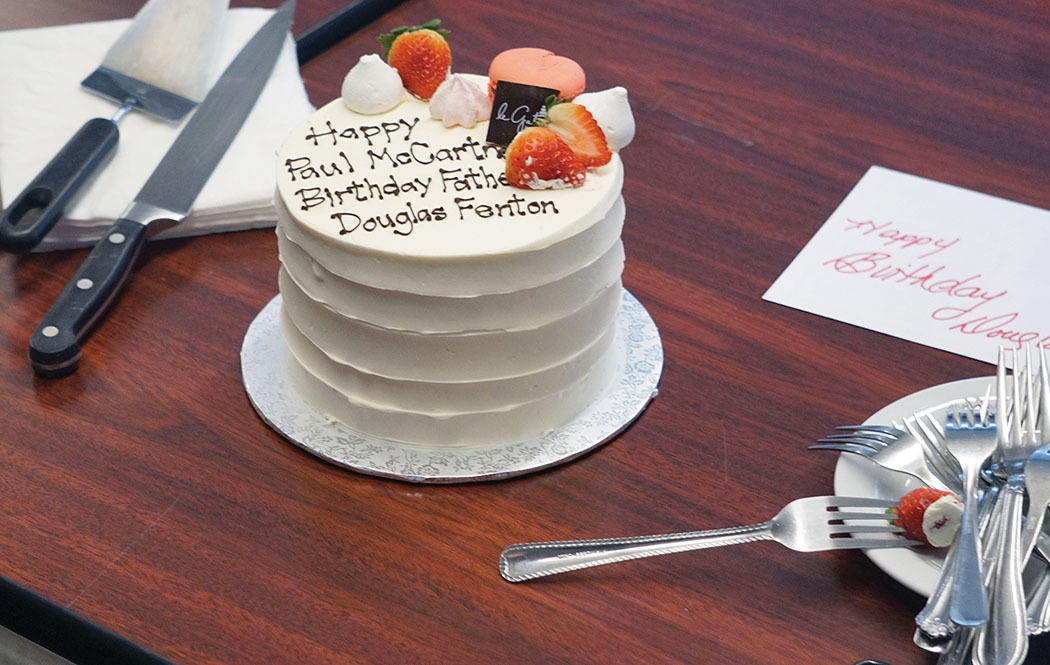 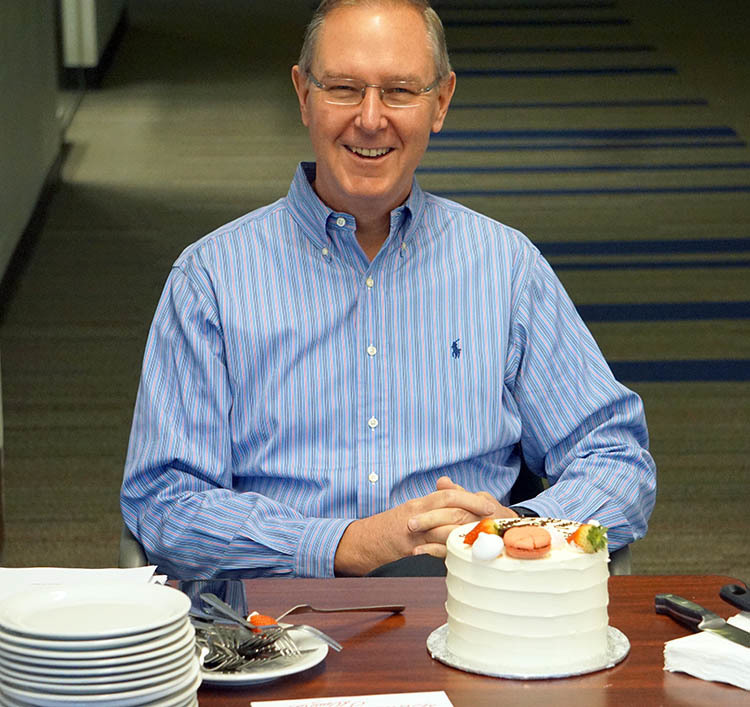 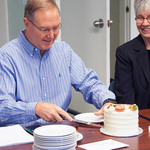 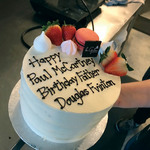 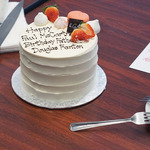 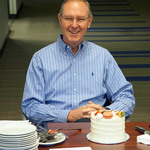 The first Synod Office staff meeting of 2020 took place in the Trendell Lounge, 1410 Nanton Avenue, Wednesday, January 8 at 10am.

Not only would the team be gathering for the first time since the Christmas/New Year hiatus but they were also welcoming back Archbishop Skelton who had been on Study Leave since November 1, 2019.

The staff celebrated the recent January birthday of Executive Archdeacon, the Venerable Douglas Fenton with the traditional song, a card and a Red Velvet Cake from Le Gateau Bake Shop. Because this was a milestone birthday some custom decorating was in order and as you can see from the photos, the first version needed to be corrected.

The meeting chaired by Rachel Taylor, Administrative Assistant to the Finance Department and Registrar of the Diocesan School for Parish development began with the Territorial Acknowledgement, acknowledging that we meet on the ancestral, unceded territory of Coast Salish First Nations: Squamish, Tsleil-Waututh and Musqueam; upon which the Synod Offices are located.

Following the birthday celebration, Archbishop Skelton presented a brief report describing her preparations   for a course that she is teaching and for the upcoming Episcopal elections. As Metropolitan of the Ecclesiastical Province of BC/Yukon, Her Grace has oversight of the electoral processes. Bishop Barbara Andrews of the Territory of the People had announced her retirement several months ago and that election although without a definite date is imminent, and Bishop Logan McMenamie of the Diocese of British Columbia submitted his resignation January 5 with his last day May 1. The Diocese of BC will hold their Episcopal election in June of 2020. Her Grace also informed the staff that she and Indigenous Justice Ministry Coordinator Nii K'an Kwsdins (Jerry Adams) had attended a meeting the night before of the group that has been assembled to discuss the follow up to Synod 2019's Resolution 5 which involves the allocation of funds for some past and future property sales to Indigenous peoples. Both Archbishop Skelton and Jerry agreed that the meeting went well, it is a very good group of people, and many voices were heard.

Synod staff will gather for a Staff Day on February 19 for First Aid & CPR Training facilitated by St. John's Ambulance. The last training day was five years ago. It is a full day of training from 8:30 to 4:30 and the course requires physical activity and kneeling on the floor. Students are asked to wear comfortable, practical clothing and footwear.

Archdeacon Fenton brought the team up-to-date on personnel developments around the diocese and Lauren Odile Pinkney, Administrative Assistant/Receptionist/Screening in Faith Administrator affirmed that the bi-annual Mission Conference will take place at the Synod Office on May 9 with conference leader Bishop Stephen Cottrell. Bishop Cottrell had been booked prior to being appointed Archbishop of York in the Church of England last month, however, regardless of his new position he will be here in the Diocese of New Westminster in May. He has chosen the theme "Hands + Feet." Promotional material and program information will be available soon. Lauren also added that she has now assumed the role of Safe Church Training Administrator taking over from Phil Colvin who had remained as a contractor in that position following his departure from Synod staff, October 2, 2019.

Building Manager, Regan Gorman advised the staff that the temperature control and ventilation systems in the building are being looked at as are some ongoing "zone" issues with the alarms.

The next scheduled Synod Staff Meeting is February 5.