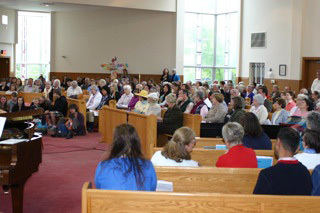 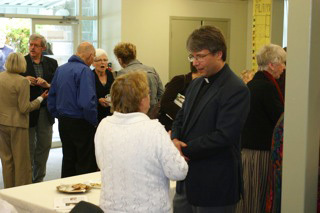 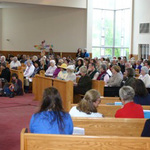 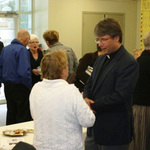 On Sunday, June 10th, 2012, the Parish of St. John the Evangelist in North Vancouver was the host parish for the annual North Vancouver Deanery combined Sunday worship.
The North Vancouver Deanery is the first deanery to complete and begin implementation of MAP and part of their vision moving forward is to view themselves not as individual parishes but as worshipping communities all part of the whole, which is the North Vancouver Deanery. An intentional way of celebrating that vision is by worshipping together at festival times of the church year and by putting one Sunday aside where all six parishes meet at one church location and celebrate the Sunday Eucharist.
The combined worship was a great success and began with the procession through the nave of representatives of each worshipping community carrying their church banners and placing them beside the chancel.
Rev. Stephen Muir of St. Agnes organized this year’s combined worship and he also helped lead the music in worship by playing drums. Archdeacon Lynne McNaughton of St. Clement’s  presided, Rev. Douglas Fenton, Director of Mission and Ministry for the Diocese of New Westminster was the preacher, and Rev. Andrew Wilhelm-Boyles of St. Agnes was deacon. The music in worship was directed by Galina Martyniouk of St. John’s and the organist was David Millard of St. Martin’s.
Rev. Christine Rowe of St. Catherine’s, Caplilano used the Children’s Talk time to promote the feeling to the congregation of being part of a family as she had the children unroll a different coloured streamer for each worshipping community and then had the youngsters go into the congregation and give members of each community their designated coloured streamer to hold on to as it came by.  Very quickly, all were connected to each other.
Another highlight of the worship was the announcement that The Reverend Patrick Blaney currently Interim Priest-in-Charge at St. Thomas’, East Vancouver will begin his new ministry September 1st, 2012 in a composite position on a three-year term that includes being Priest-in-Charge of St. John’s and also a role on the Regional Team for the Deanery of North Vancouver. Laurel Dykstra ordained to the transitional diaconate, June 24th, 2012, will begin her new ministry ¼ time at St. Catherine’s and ¼ time also with the Regional Team.
Following worship, in the lounge there was a wonderful spread of sandwiches contributed by members of all six communities and cookies, tea and coffee courtesy of the host church.
Images:Homepage, Rev. Andrew Wilhelm-Boyles, St. Agnes and Alison Watt of St. Catherine's both of the Regional Team chat tat the reception. Top left,  the St. John's nave on Sunday morning, June 10th. Middle right, June 10th Deanery worship organizer, Rev. Stephen Muir mingling at the reception. PHOTOS: Penny Connell and Margaret Ellis

(Thanks to Penny Connell for the information for this story)