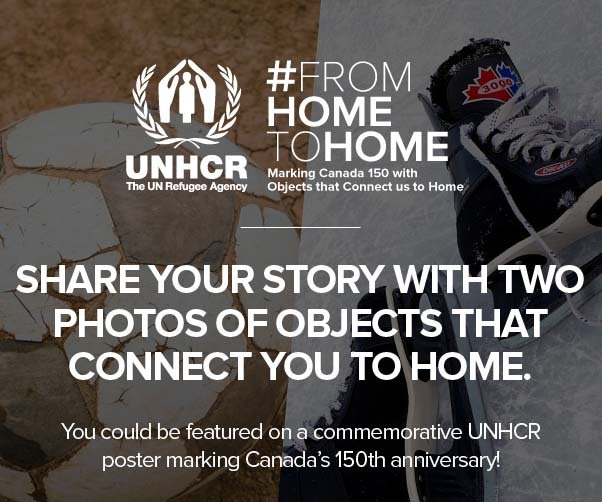 #FromHomeToHome is a United Nations Refugee Agency (UNHCR-Canada) campaign to mark the 150th Anniversary of the Confederation and to showcase the country’s long tradition of welcoming people, by asking refugees in Canada to share with us:

The set of photos will be accompanied by a caption, a maximum of 150 words, explaining what the objects are, their significance and where they are from (in the case of the item representing the country of origin).

UNHCR will collect a total of 150 sets of photographs to be published on UNHCR Canada's digital networks from 1 May to 30 September. Through these images, UNHCR Canada will highlight the universal sense of belonging, with each set of images representing people’s roots, embedded both in Canada and in their country of origin.

On World Refugee Day (WRD) specifically, we will be asking ‘celebrities’ (politicians, artists, sport women, etc.) to come with such objects that we will photograph during public events.

Participants will be featured on a commemorative UNHCR poster marking Canada 150th that we will later use to promote UNHCR in Canada.

Submissions can be sent by email to canot@unhcr.org or by uploading photos and caption at: http://www.unhcr.ca/fromhometohome/

A poster is attached below for downloading for print and display or to share on electronic sites.