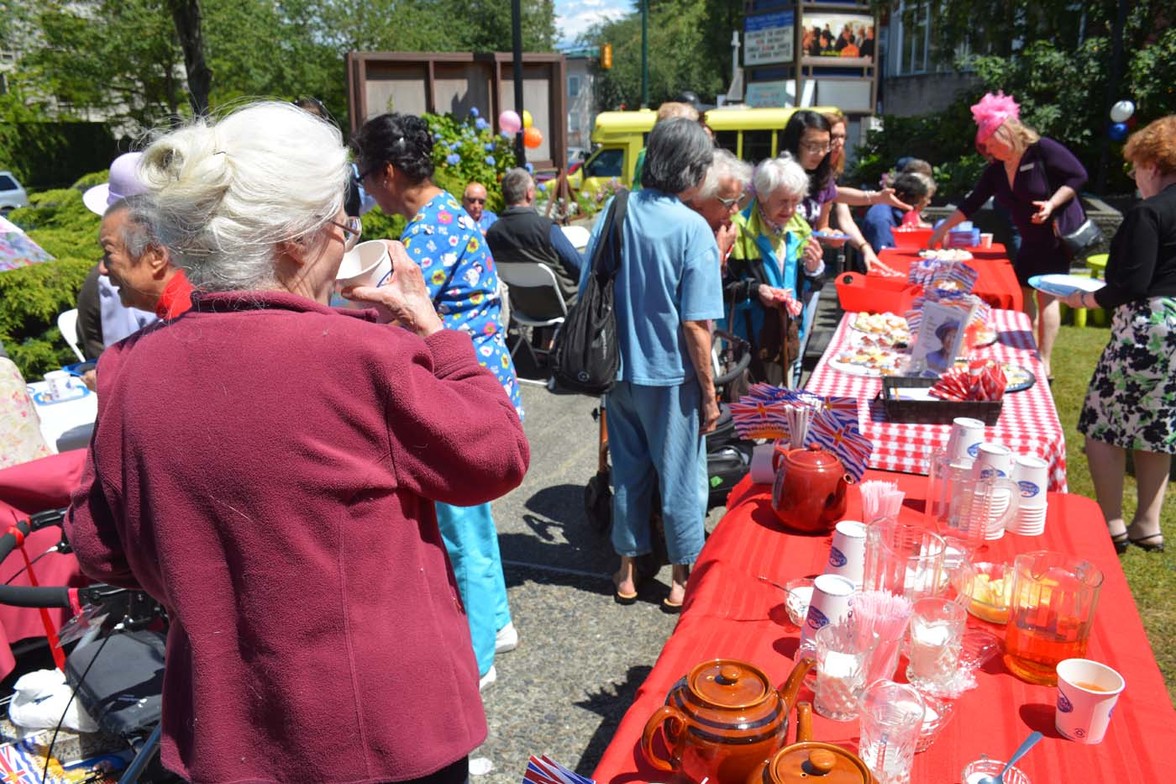 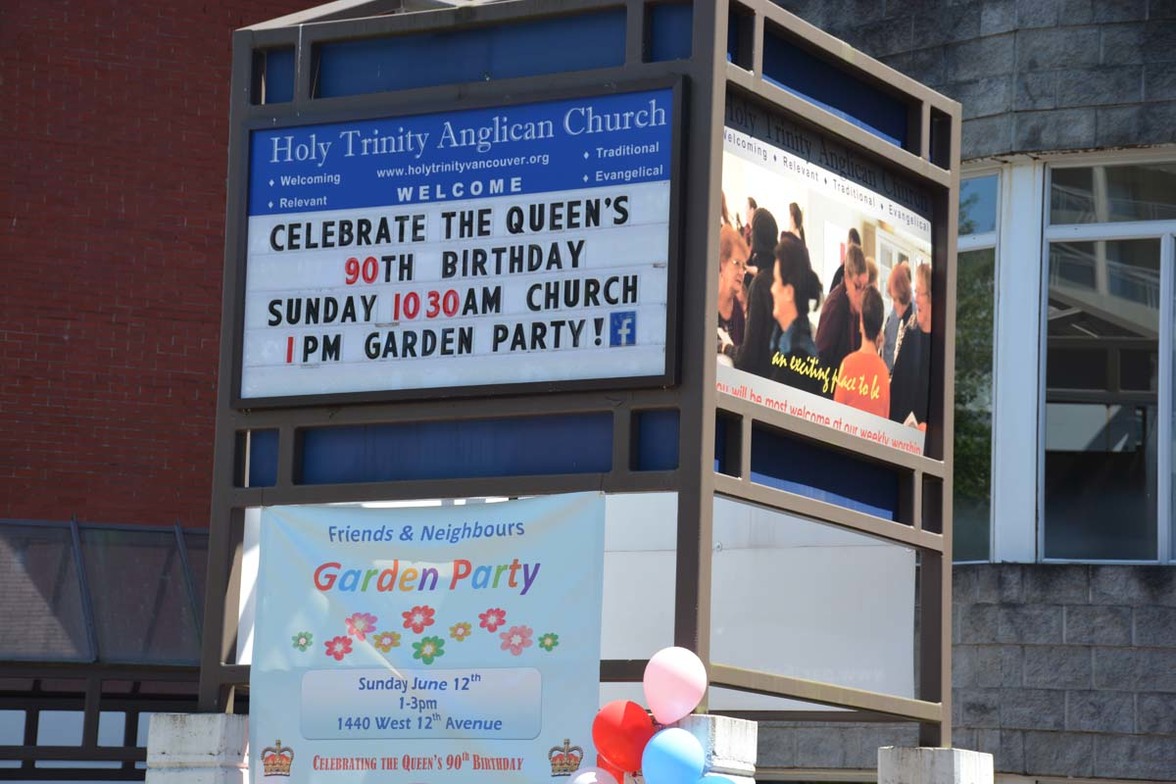 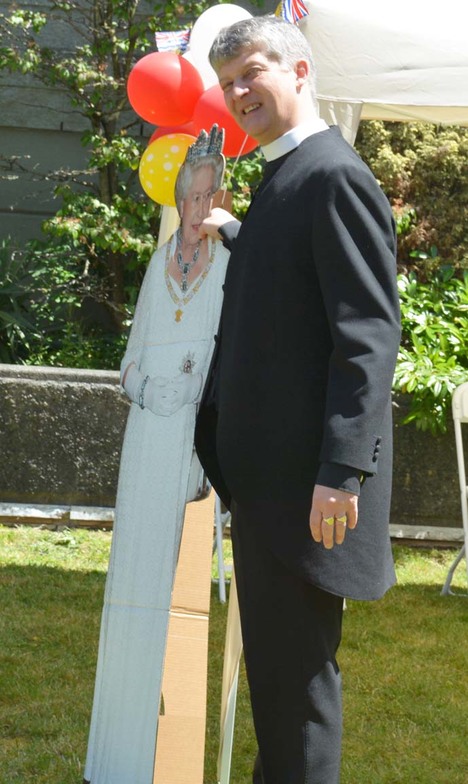 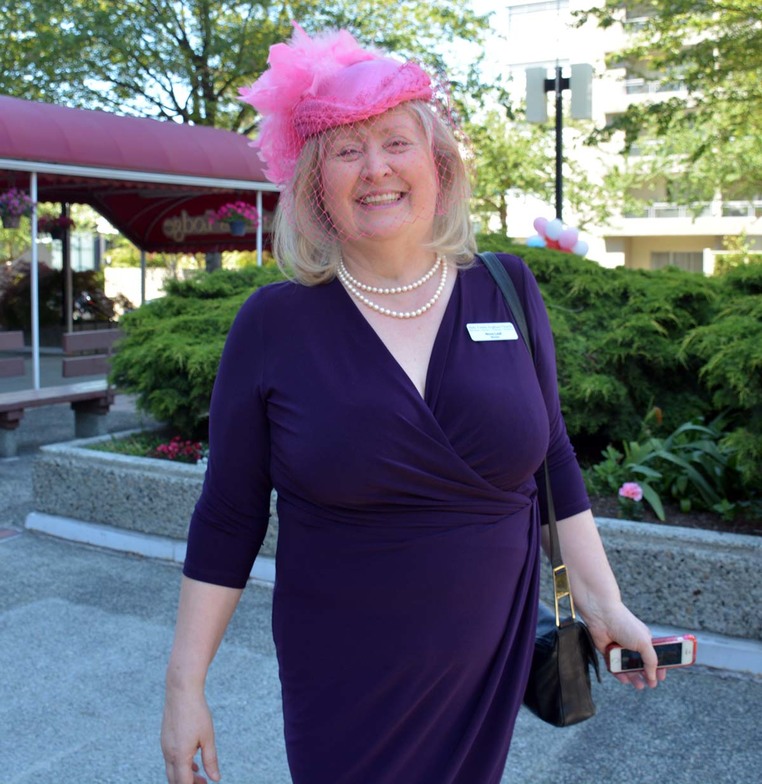 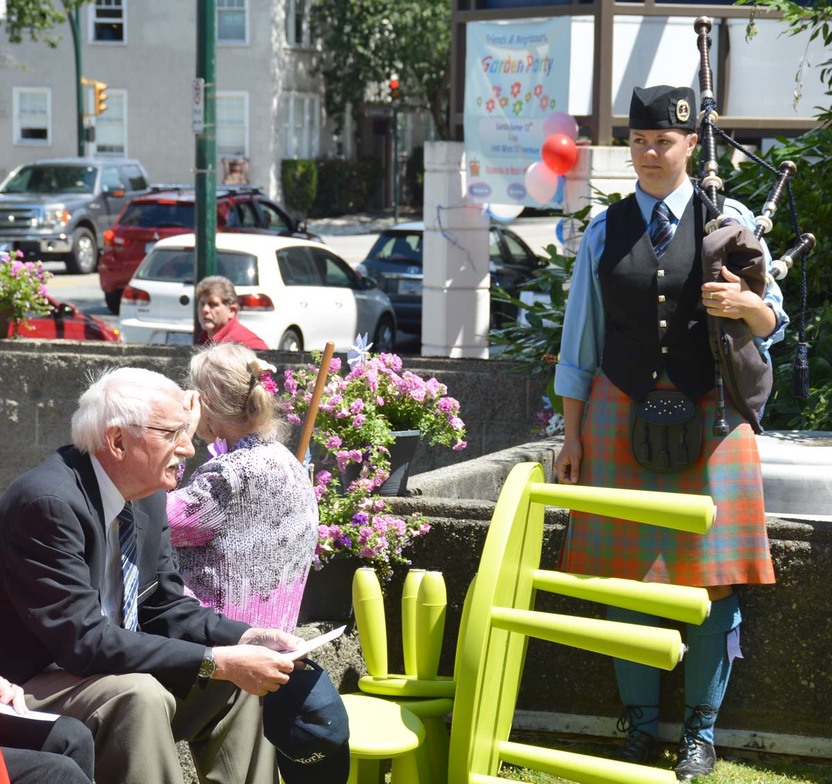 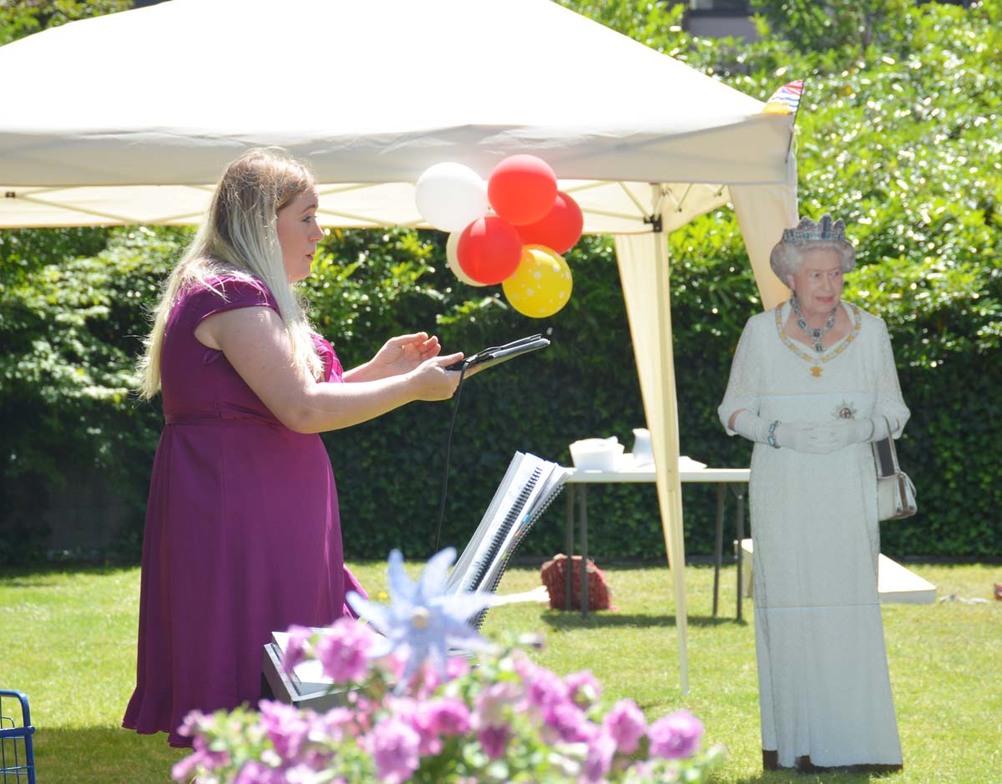 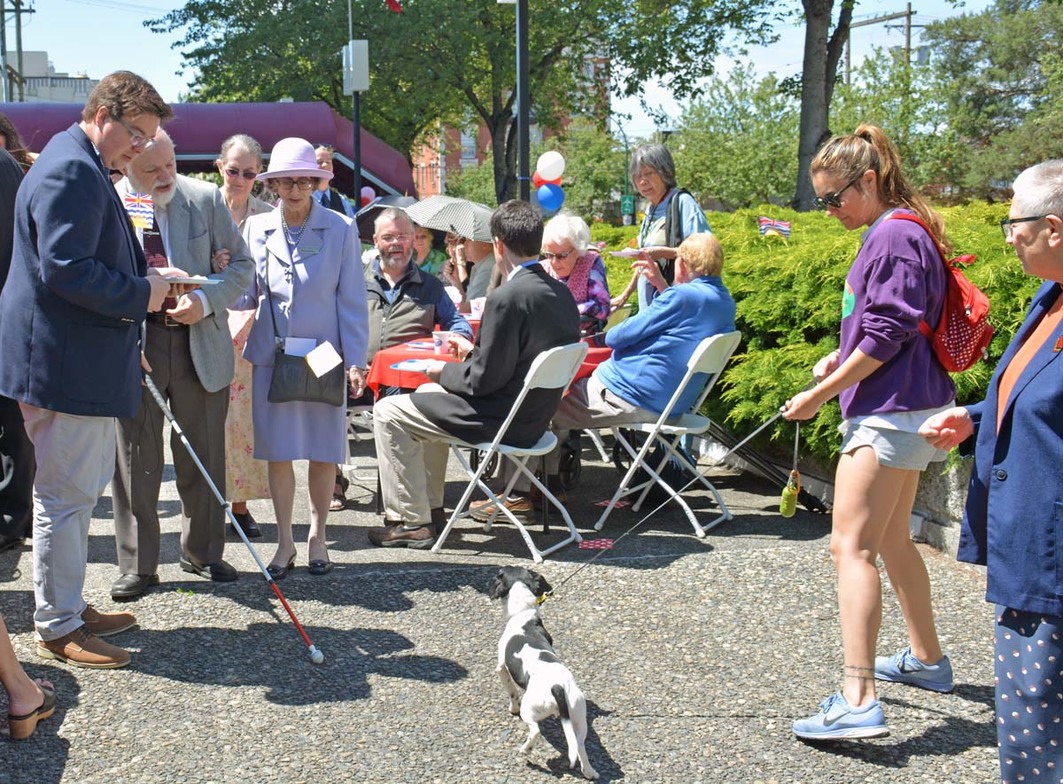 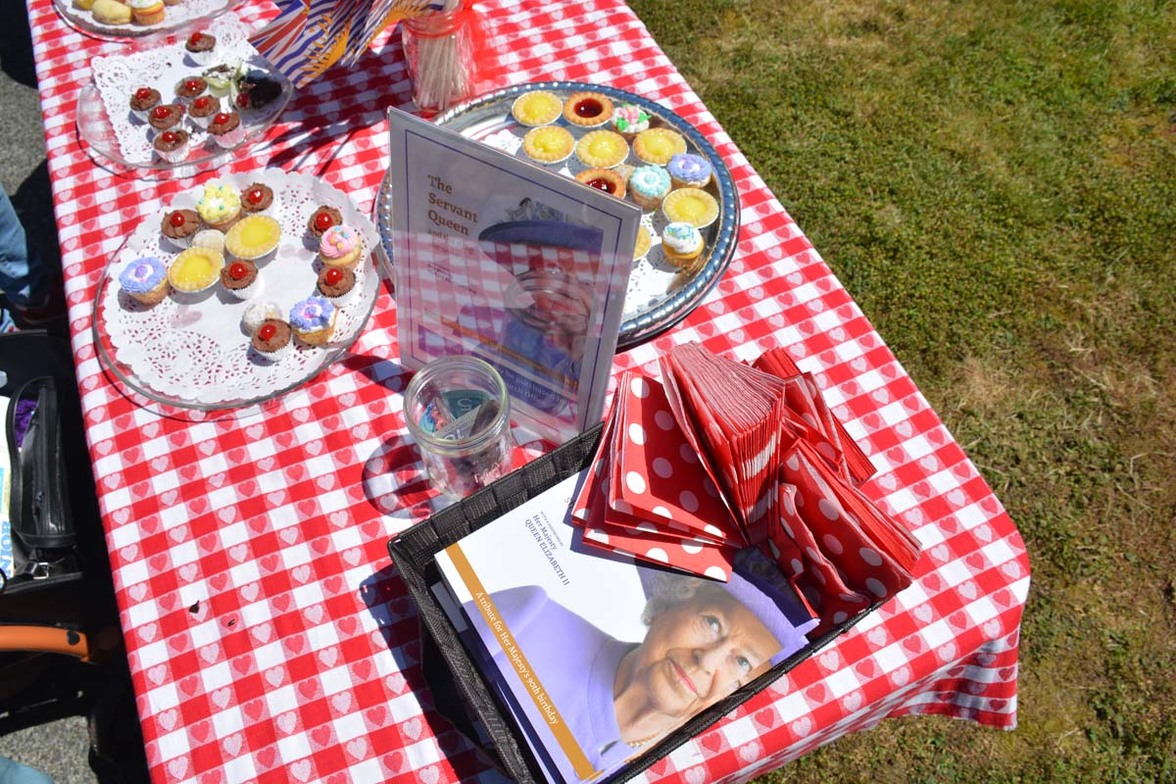 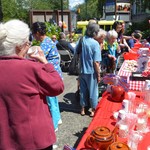 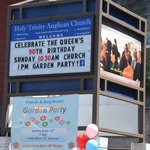 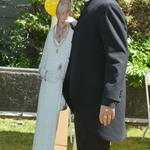 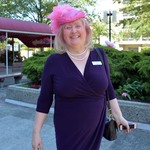 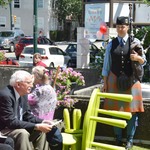 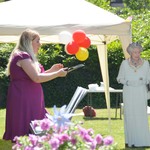 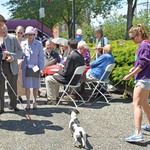 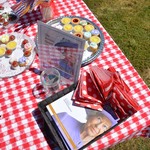 The weather in early and mid-June 2016 for the Greater Vancouver Area has been pretty awful. Cold, windy, rainy, overcast and damp, not good weather for outdoor events, but luckily for the organizers of Holy Trinity Vancouver’s Garden Party and Tea in honour of Queen Elizabeth’s 90th birthday the sun came out and shone brightly and warmly from 1-3pm on June 12.

The green space and terrace sidewalk situated to the west between the church building and Chalmers Care Home were attractively appointed with red, white and blue balloons, and the tables covered with bright red tablecloths.

A number of parishioners were in attendance, having remained on the site following the main Sunday service of Holy Communion and the coffee hour that followed. Many parishioners were involved in the preparation of the event, putting the tables and decorations in place, plating the finger sandwiches, tarts and other sweet delicacies and of course making the tea, both hot (there was milk, sugar and fresh lemon) and cold. With a good crowd already in place by 1:15pm, Holy Trinity’s rector, the Reverend Karl Przywala, resplendent in clericals which featured a morning coat welcomed everyone to the event. He said that Queen Elizabeth actually “gets three birthdays”, her actual day of birth in April, Victoria Day and the official royal birthday celebration appointed for June in order to take advantage of drier weather. He asked the group if they were aware of the milestone event that was celebrated on June 10, the first day of the official weekend of the Queen’s 90th birthday celebrations, and many of the assembled called out that June 10, 2016 was Prince Philip’s 95th birthday.  He then took a short walk out onto the green apologizing that Queen Elizabeth couldn’t be in attendance but that they did have an almost life-sized cardboard model of her placed beside a portable pavilion.

The tea cart was the first item to be brought out from the Holy Trinity kitchen which signaled the rector to lead the singing of grace – “Praise God, from whom all blessings flow;  Praise him, all creatures here below;  Praise him above, ye heav'nly host; Praise Father, Son, and Holy Ghost.” The singing of grace was followed by the singing of “The Maple Leaf Forever” which was thoroughly enjoyed by those in attendance. Small paper flags of the Province of British Columbia were also distributed.

The sandwiches, cakes and tarts were soon brought out and placed on buffet style tables. The food and drink were much enjoyed by all.

Although sponsored by the Parish of Holy Trinity, this was very much an event presented for the neighbourhood and for the community. There was no charge and all were made welcome. There was a piper, a soprano soloist and a pianist all contributing to the festive atmosphere. The entertainment portion of the event received enthusiastic applause.

The Reverend Karl Przywala forwarded the sermon he had preached that day to diocesan communications to give context to the celebrations taking place that afternoon, and also to provide a biblical foundation to our calling as Christians and our role as citizens. A pdf is available below.

Nominations Committee Promos "This is the Day the Lord Has Made" What We Do!