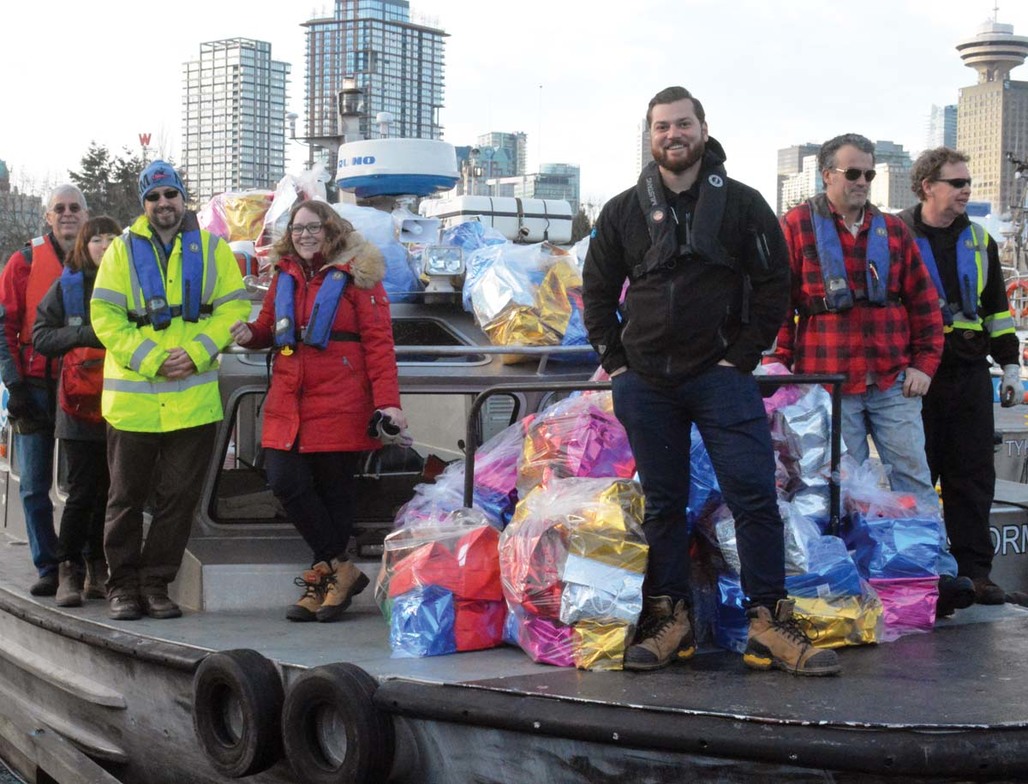 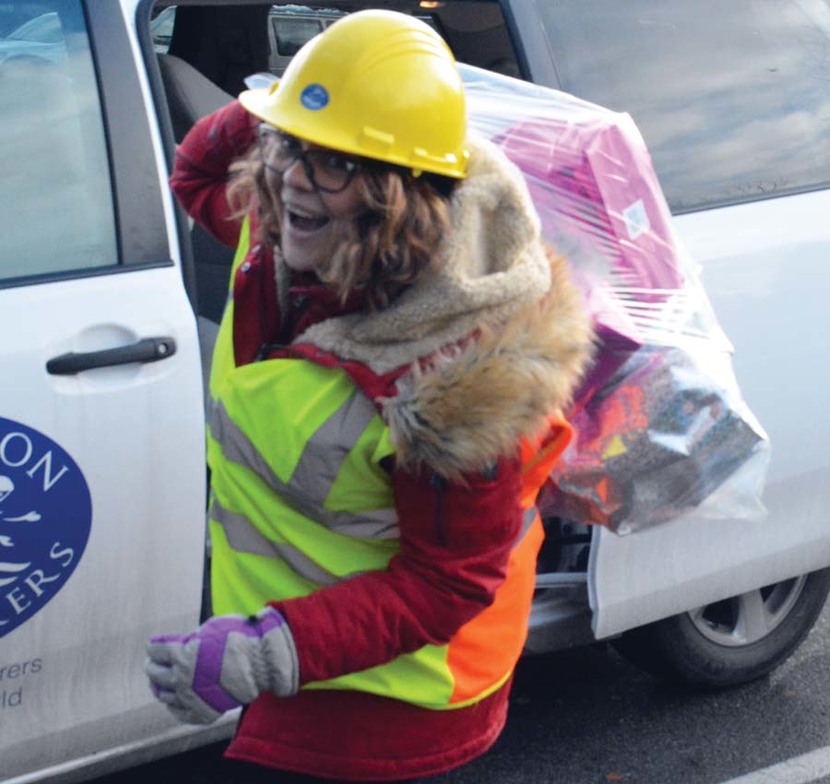 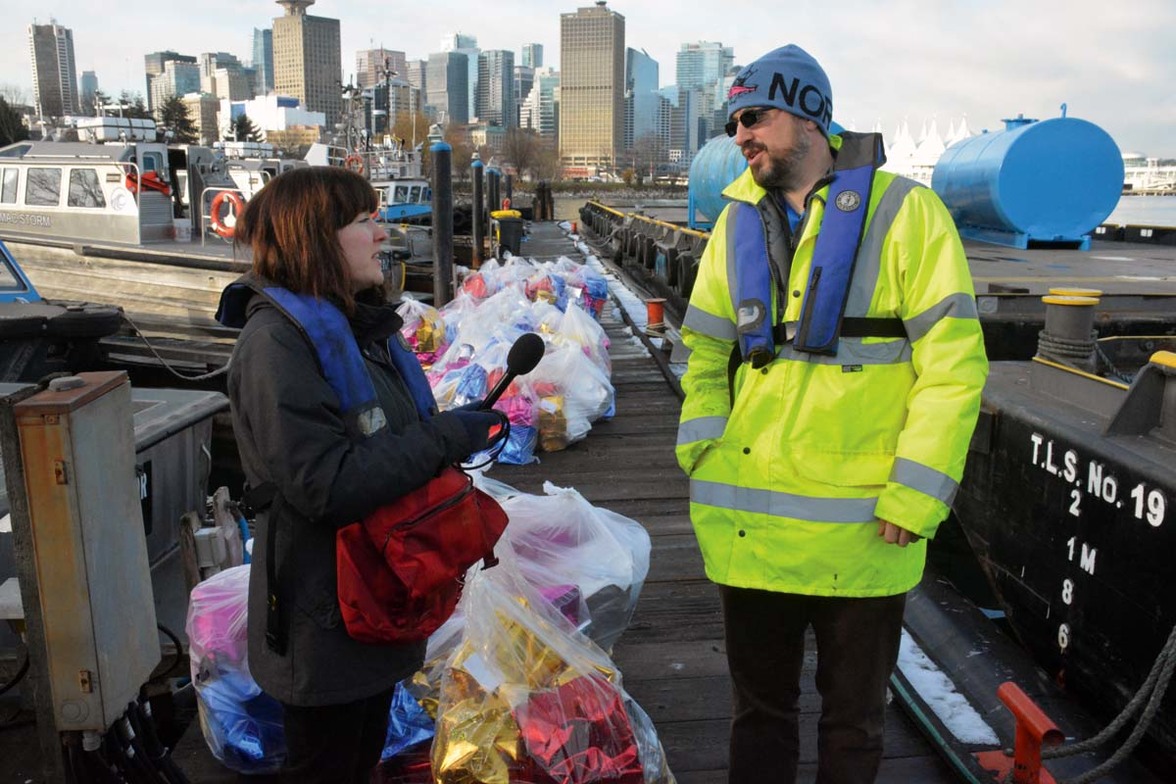 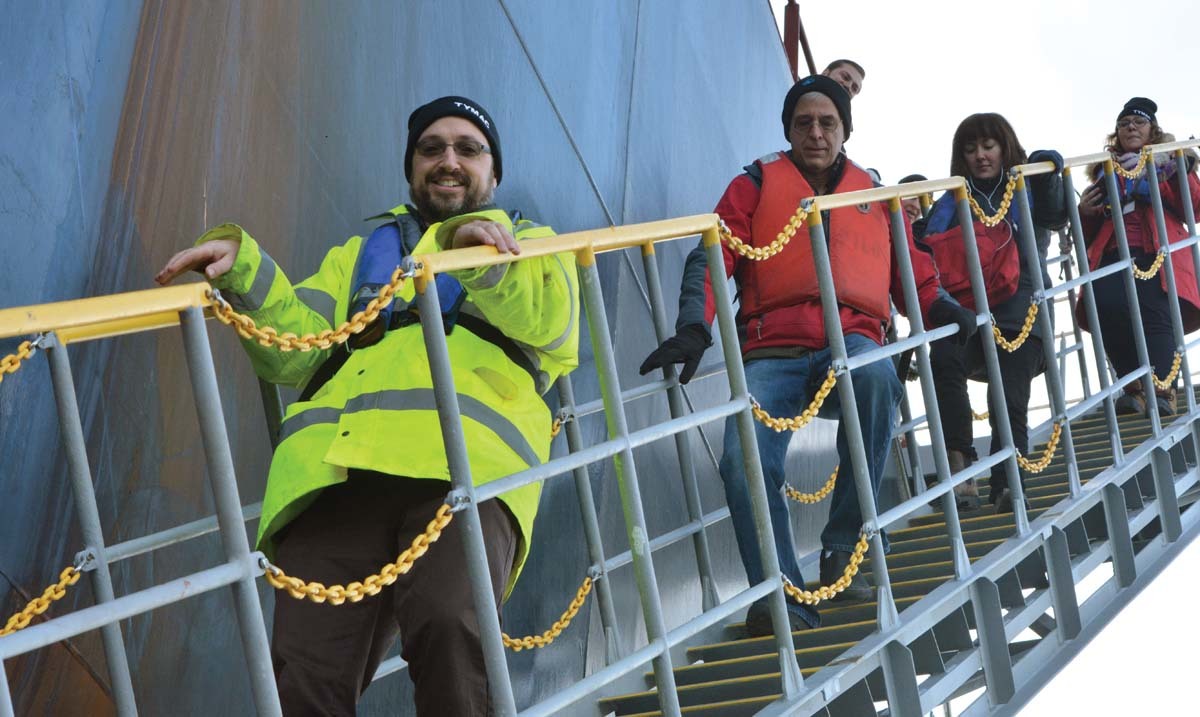 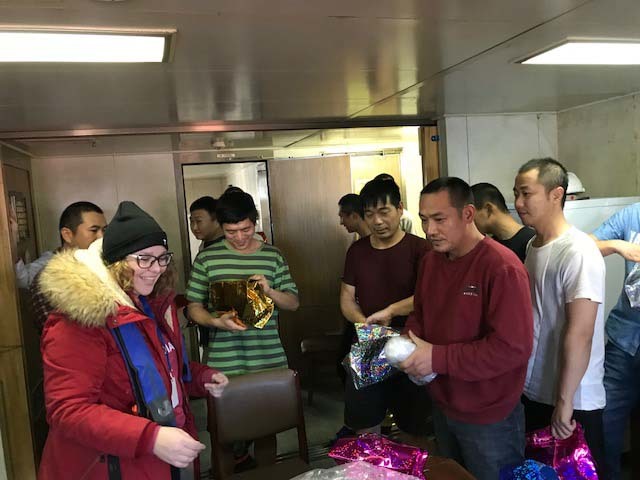 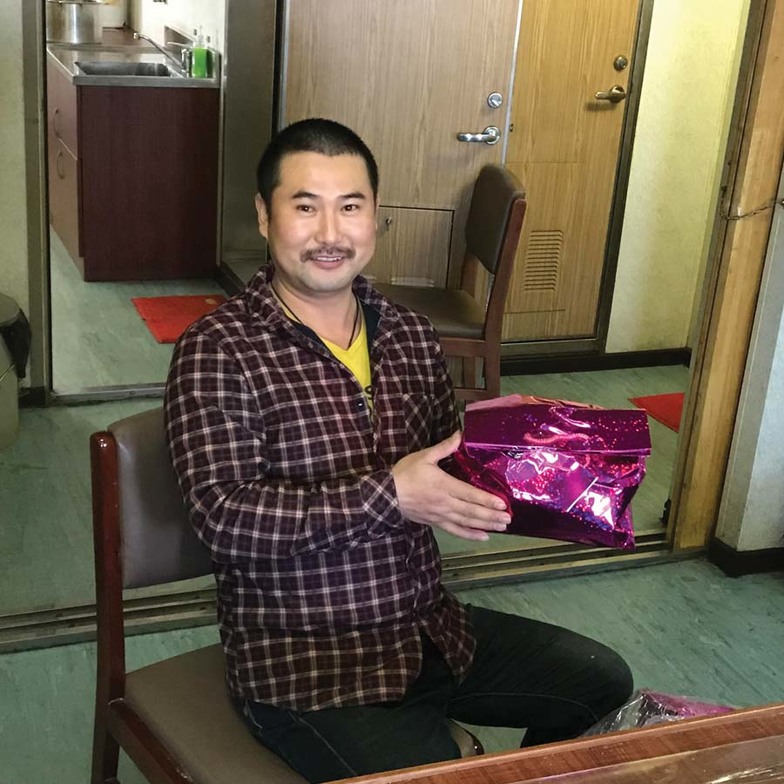 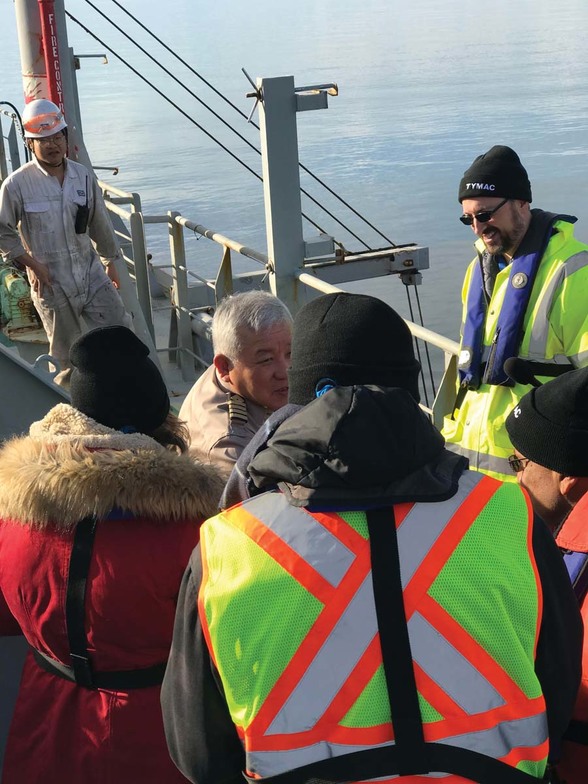 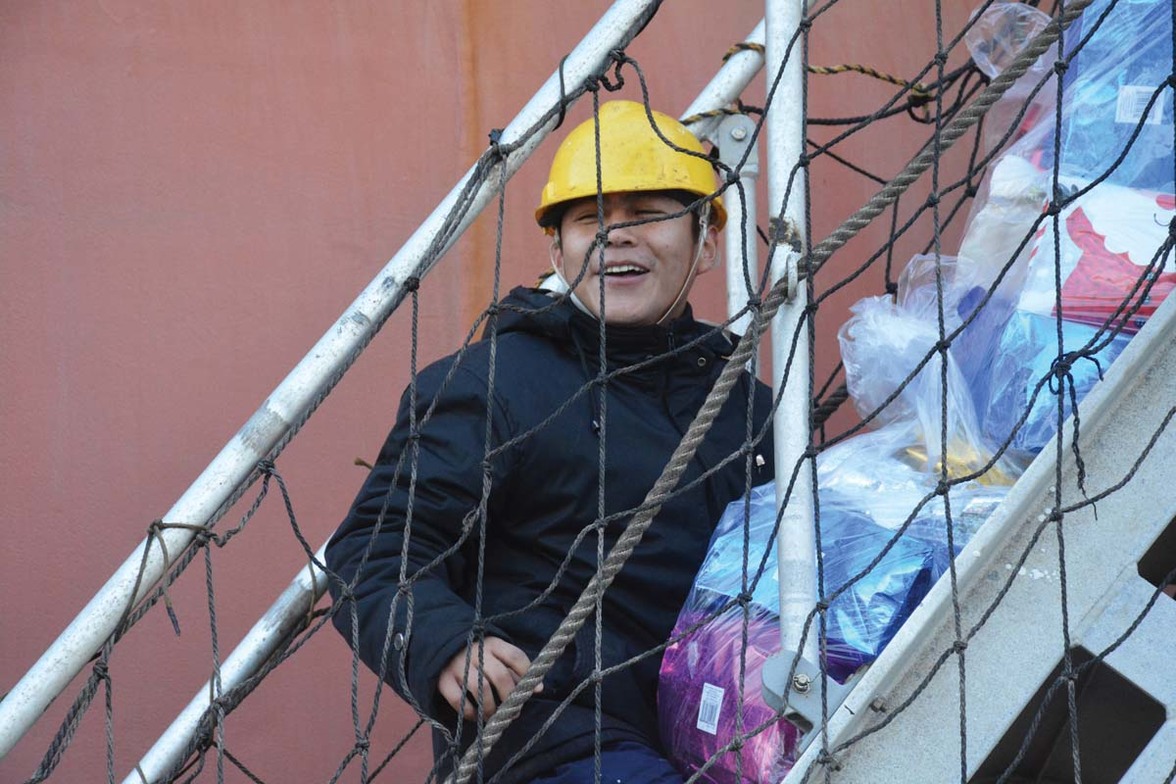 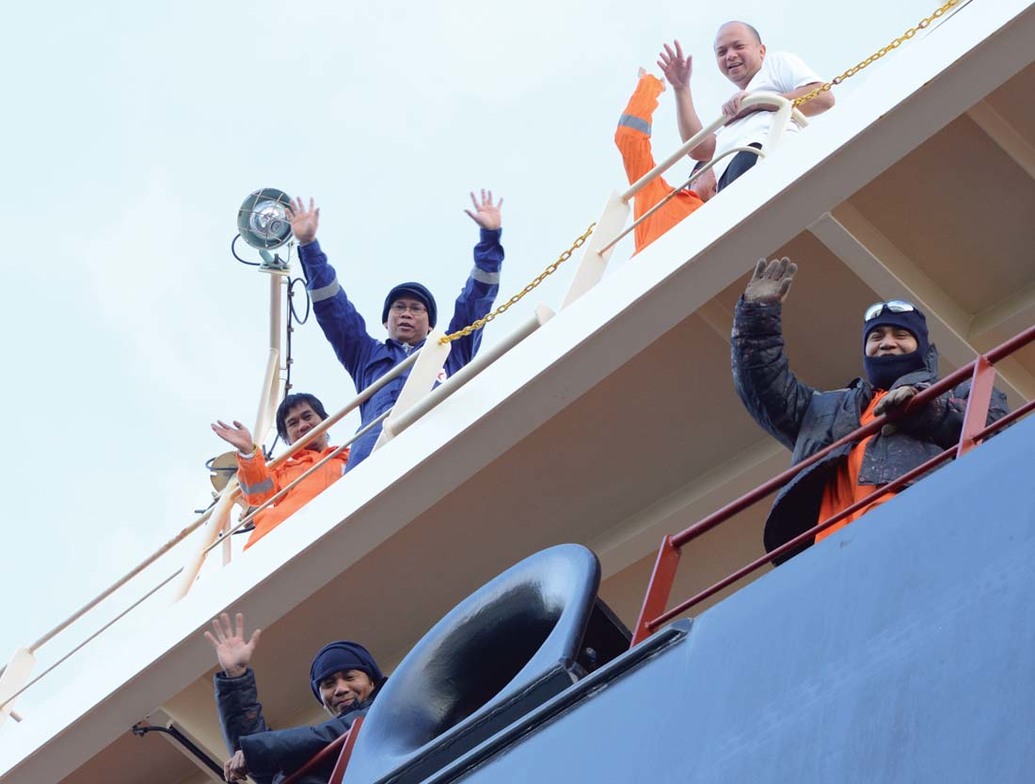 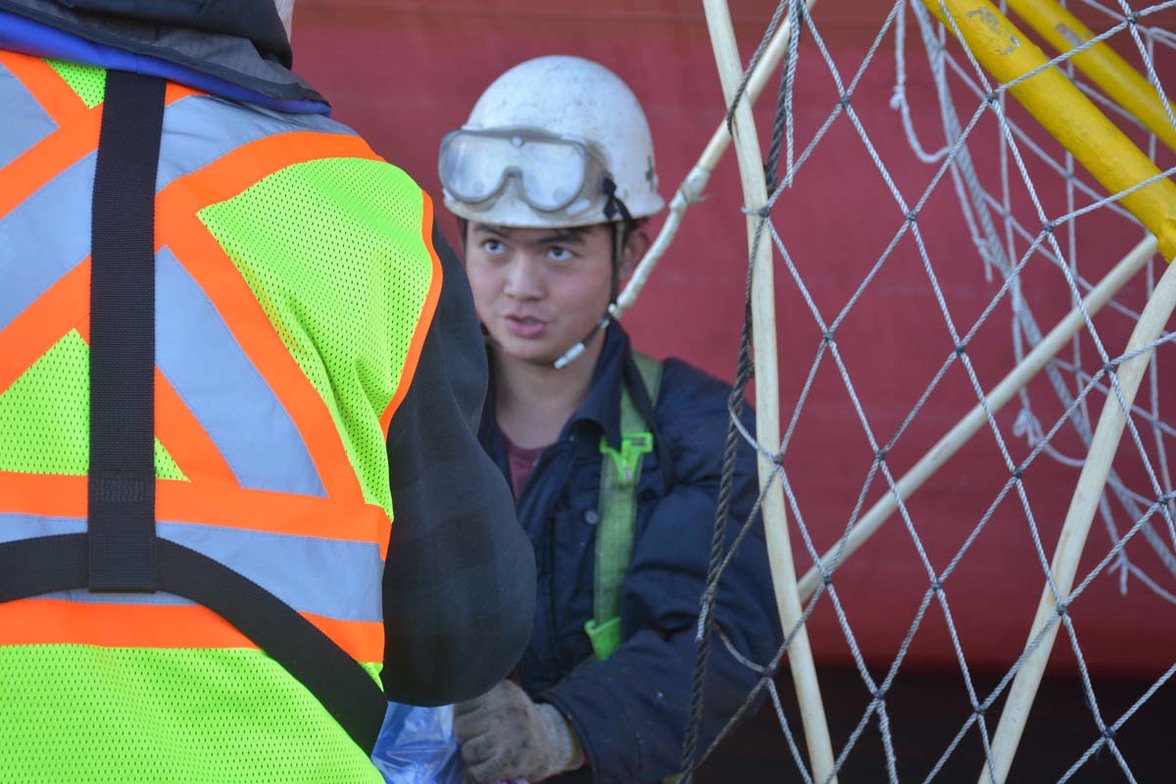 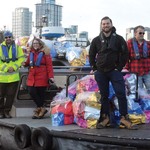 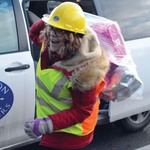 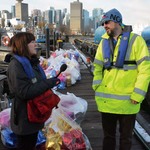 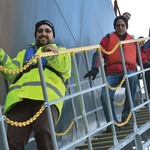 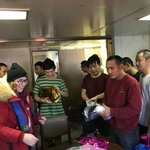 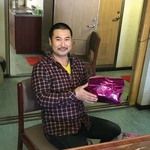 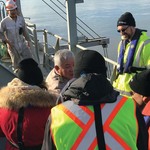 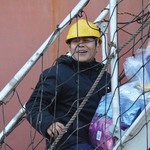 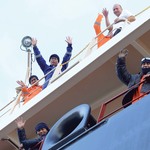 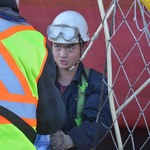 On Friday, December 22, 2017, Senior Port Chaplain of the Mission to Seafarer’s (MtS), the Reverend Peter Smyth; intern, Miranda Peters (who for a year has served as the Seafarer’s Welfare Worker); Roman Catholic Chaplain to the MtS, Deacon Dileep Athaide; Christian Reformed Chaplain to the MtS, Pastor Gary Roosma; Deacon at St. Michael’s Multicultural Anglican Church, the Reverend Eric Stroo and a CBC intern doing coverage for the afternoon drive radio program, On the Coast, (click the link to access an archive recording of the 9 minute segment) Jennifer Wilson headed off on the proverbial “three hour tour.” The ship they boarded wasn’t the SS Minnow but the Tymac water taxi, Tymac Agent with the goal of delivering close to 400 wrapped gift packages to the 18 ships located in Vancouver’s harbour.

The preparation and distribution of nearly 1000 gift packages has been a priority seasonal ministry of the MtS Port of Vancouver and Roberts Bank for a number of years. Participating churches and organizations encourage their members to donate: toothbrushes, toothpaste, candy, chocolates, socks, hand-knit toques (a real favourite), scarves, gloves and other sundries to be packed in brightly coloured gift boxes and distributed to seafarers who find themselves far from home during the Christmas season.

In preparation for the delivering of gifts, members of St. Michael’s Multicultural Church gathered at the MtS Flying Angel Club at the foot of Main Street on December 17 and assembled more than 300 gift packages.

On the morning of December 22 the aforementioned group met in the Flying Angel Club and spent some time moving the gifts now situated in groups of 10 inside clear plastic bags to the MtS minivan and then about 750 metres to the dock where the Tymac Launch Services dispatch and dock is located. When the gifts had been moved to the dock entrance, the MtS team with the assistance of Tymac staff, including GM, Doug Towill and Steve Hnatko, Director of Marketing and Communications for both Tymac Launch Services and their parent company, Tidal Transport loaded the 38 bags onto the water taxi, posed for a few photos and then head off into the harbour to visit the 18 ships (mostly all tankers) anchored in the harbour, in English Bay and farther to the west adjacent to Point Grey. Tymac donated all of the launch services and the personnel. VERY GENEROUS!

December 22 was also a bittersweet day of celebration as that was the last day on staff for MtS’s Seafarer’s Welfare Worker, Miranda Peters. Miranda had occupied this internship position for a year and her presence has been a huge asset to the ministry of MtS. Following the day of delivering presents Miranda was scheduled to travel to YVR and fly home to Hamilton, ON for the holidays and then off to new adventures in London, England.

The weather was beautiful on that December late morning and afternoon, sunny and cold (for Vancouver) with a cloudless sky. For the first few visits, Steve or the pilot would contact the ship and if a connection was made via the radio a crewperson would soon be seen on the deck moving toward the place where the controls for the gangways were located and the gangway was lowered as the Tymac pilot skillfully maneuvered the launch into position. The first ship was the DL IVY a Panamanian (many of these types of vessels are Panamanian) bulk cargo tanker with a Filipino crew. One crewmember in hardhat and coveralls appeared at the top of the gangway and Rev. Smyth yelled out what became the standard first question, “how many in the crew?” The seafarer held up his ten fingers twice and then added two more fingers signally ‘22’. That meant that two gifts would need to be extracted and added to one of the two bags of ten. He came down the gangway, was enthusiastically greeted by the MtS team and then tried to move the two large and heavy bags up the gangway. This proved difficult so Steve Hnatko quickly jumped up on the gangway and grabbed a bag Santa Claus style and followed the crewperson up onto the deck. The next few stops were much the same, but the MtS team and Jennifer wanted to spend some time with the crews in their quarters so they all went aboard usually for a brief visit of 10 minutes.

Most crews numbered about 20 with one ship having only 15 and another had 25 as they had some cadets on board. Most of the crews are Filipino but there were also two crews from the Ukraine, a crew from Myanmar with a Korean Captain and a Chinese crew aboard the Hong Kong bulk tanker, Renaissance.

MtS is an extremely important ministry and it isn’t just there for seafarers at Christmas. Seafarers are one of the most marginalized groups of workers in the world and are often the victims of outrageous breaches of standard employment practices. The Mission to Seafarers ministry is always looking for Volunteers and donations are gratefully received, please find out more about MtS by visiting their website.