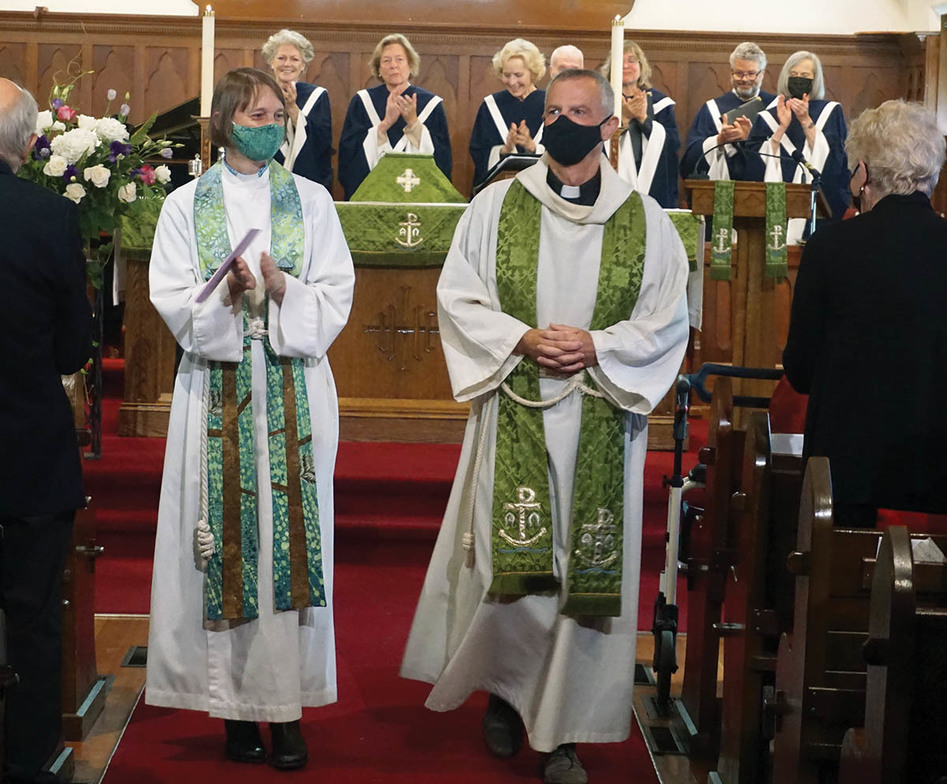 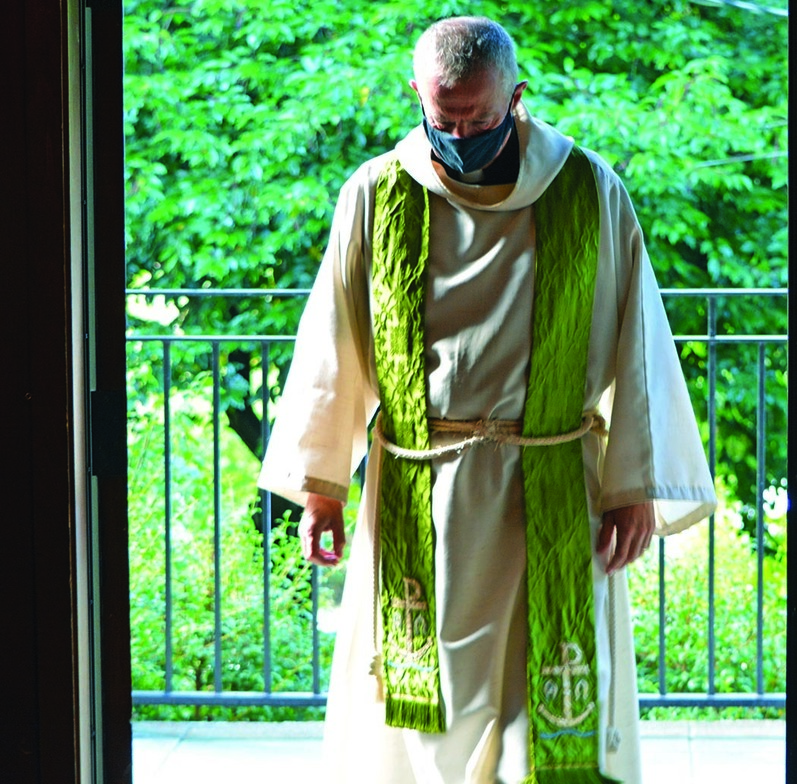 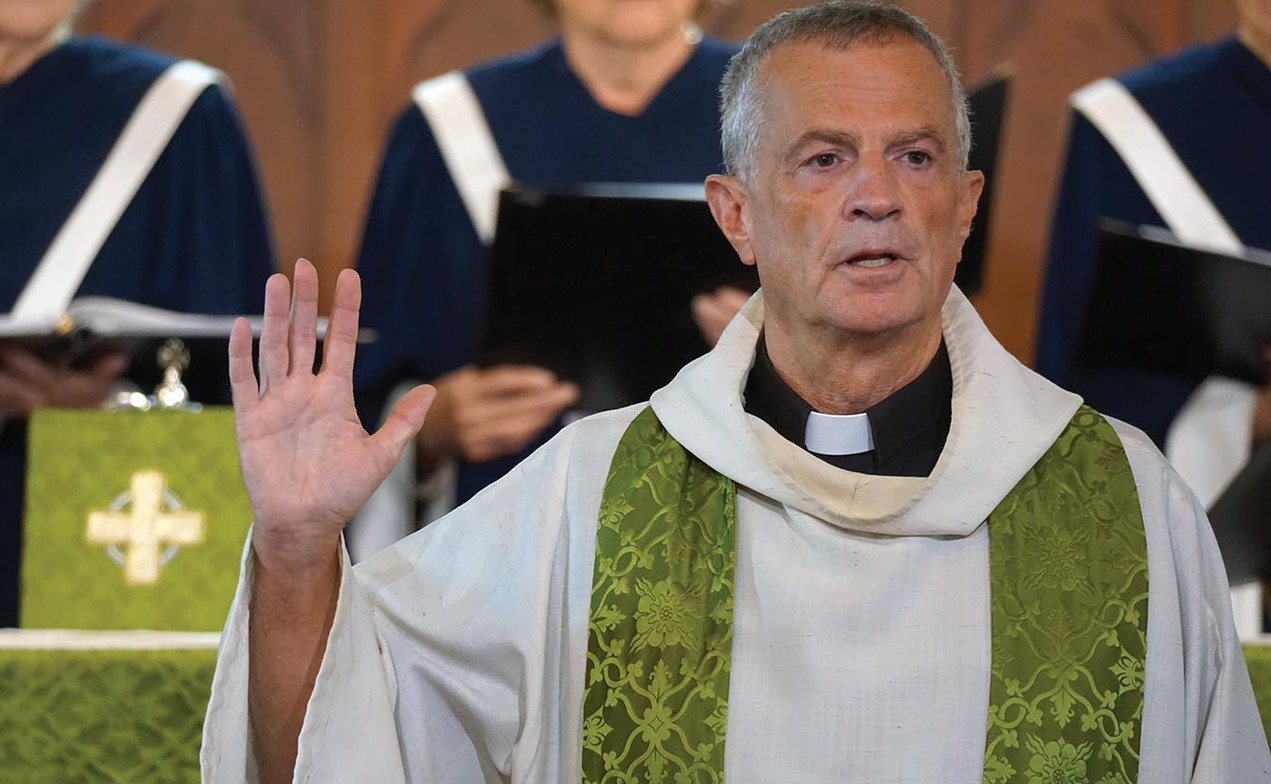 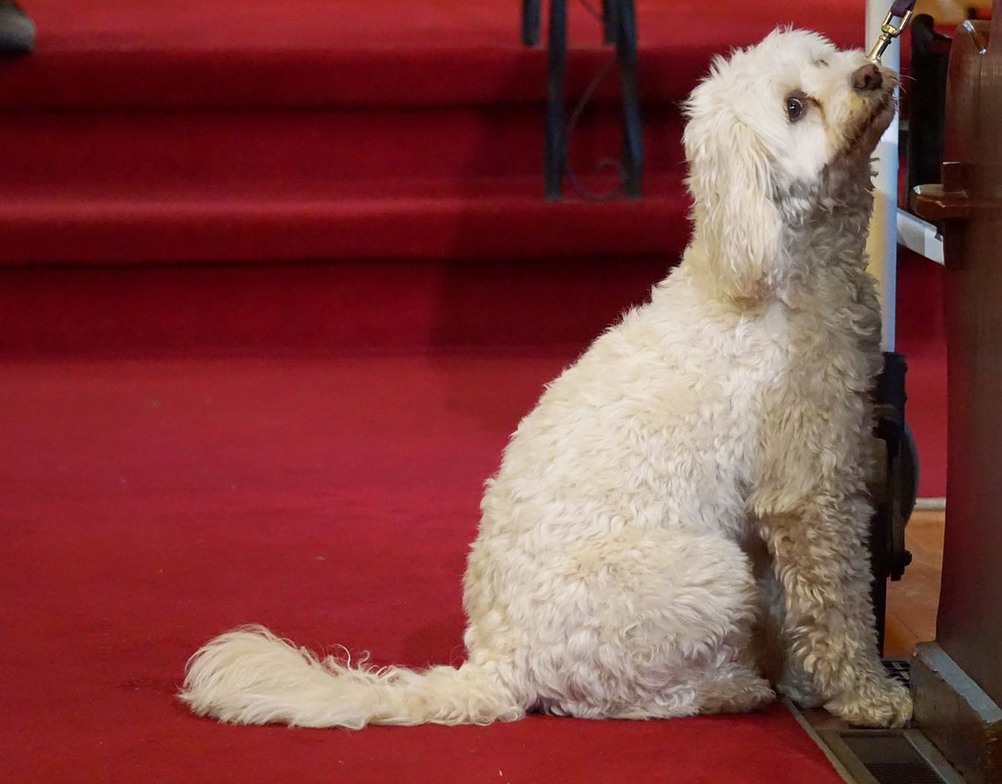 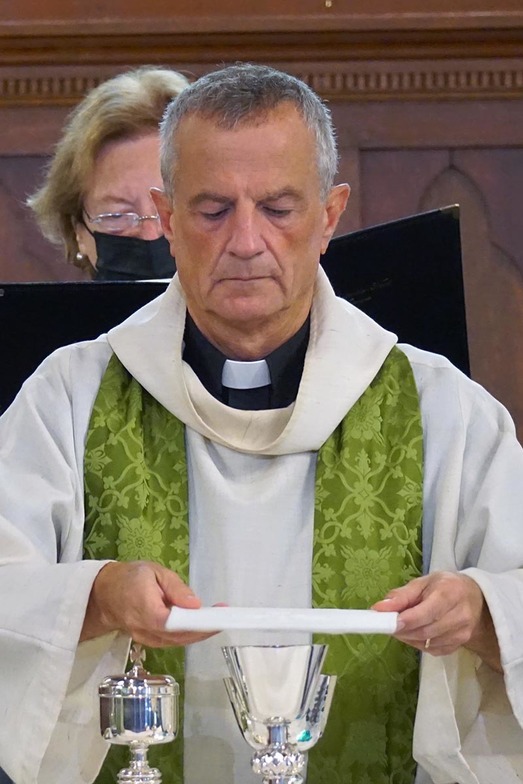 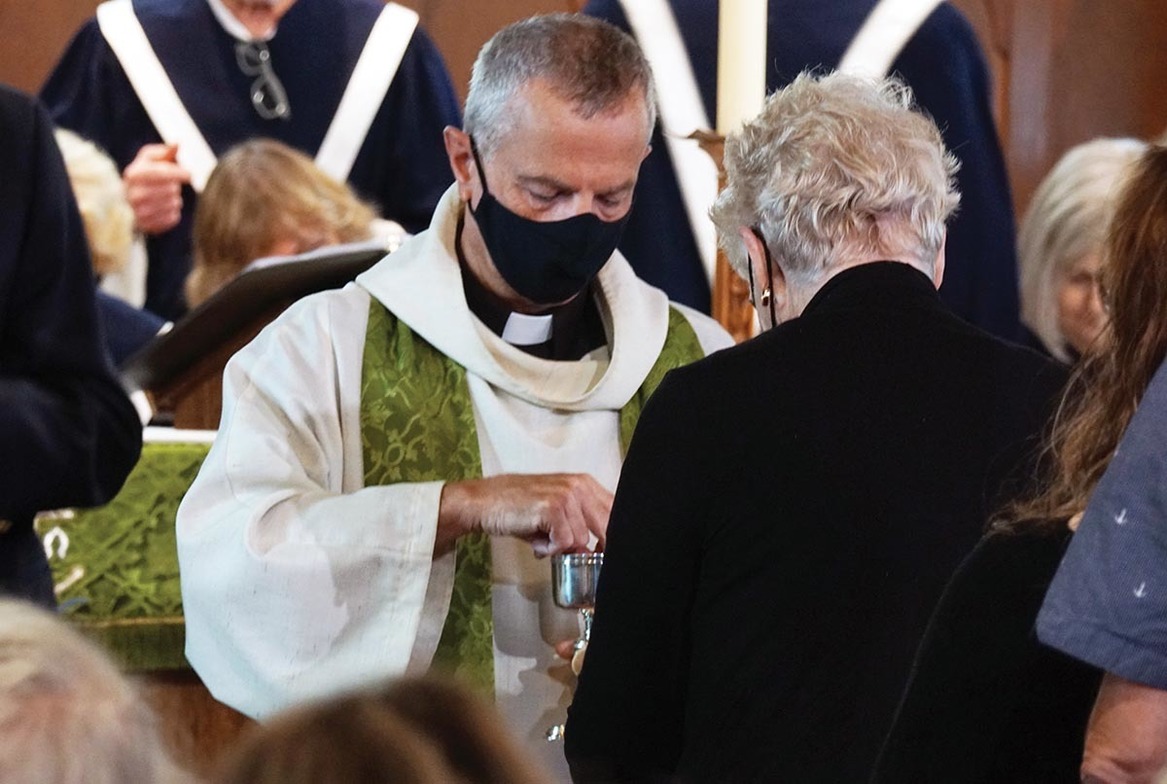 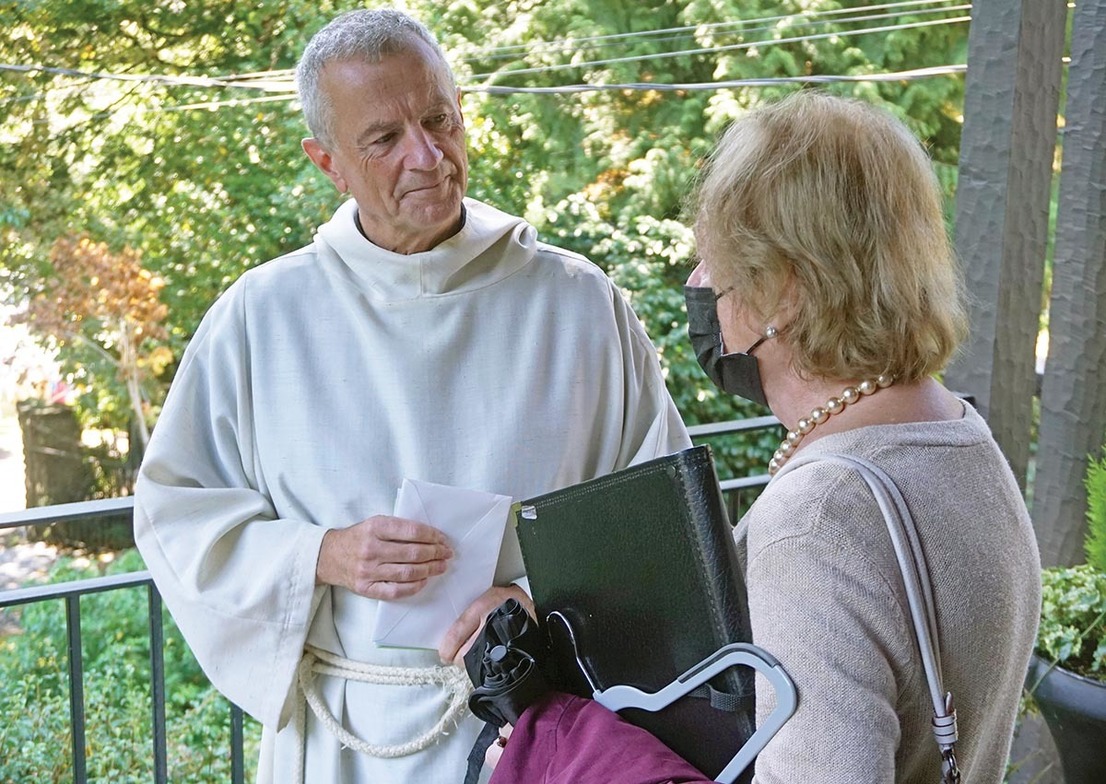 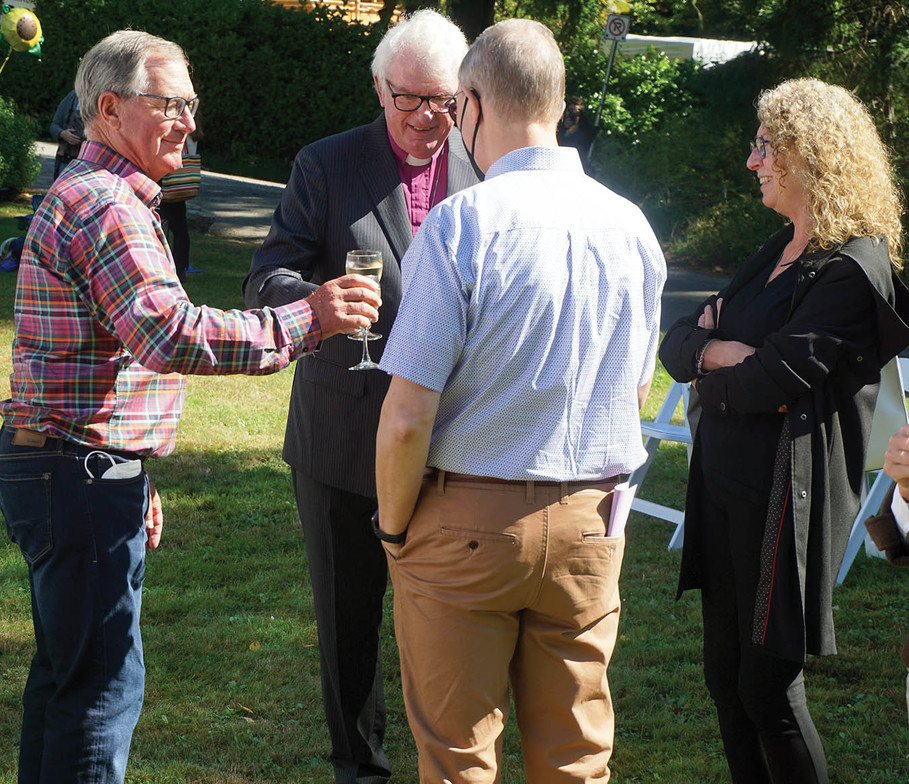 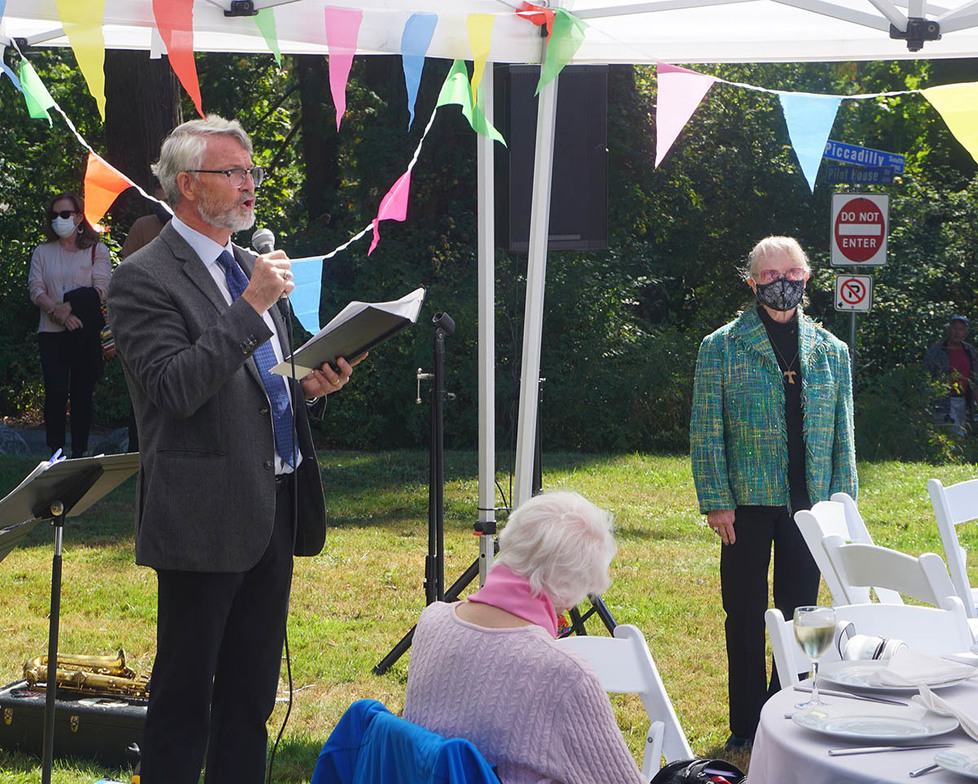 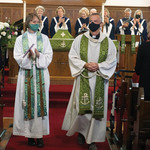 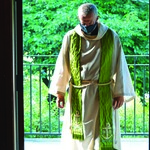 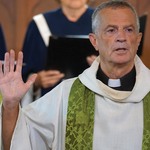 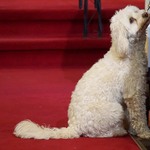 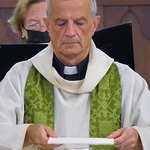 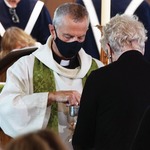 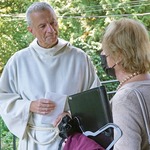 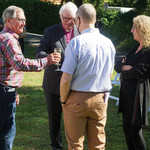 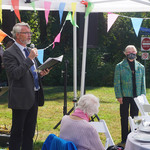 On Sunday, September 12, 2021, the 16th Sunday after Pentecost, the Reverend Dr. Angus Stuart celebrated the Eucharist as he has been doing for over 16 years. This however, would be the final time as rector of the picturesque parish situated on waterfront in the Caulfeild neighbourhood of West Vancouver. Rev. Stuart began his ministry as rector, March 1, 2005.

During his more than 16 years in the diocese, all as rector of St. Francis, and also for a few years regional dean of Sea to Sky deanery, Rev. Stuart has regularly encouraged his parish to help other parishes with fundraising, renovations and social justice activities. Over the past decade he has performed dramatic presentations of the Gospel of Mark, “Testament of a Naked Man” and the Gospel of John, “Word of Light,” for the benefit of the hosting organization, parish or venue.

On that sunny mid-September morning the church was as full as could be, given that some COVID protocols are still in place, with approximately 55 folks (and one canine companion) in the nave and a dozen in the chancel which included the sanctuary party and choir. Rev. Stuart began his farewell sermon with a hint of a smile and a somewhat ironic tone saying:

“Well this is a bit surreal, isn’t it? Feels a bit like I’m preaching at my own funeral. In which case, you’ll probably know what I’m going to say. ‘Not many of you should become teachers my brothers and sisters, for you know that we who teach will be judged with greater strictness,’ or, as Bob Dylan famously sang, ‘I’d become my enemy in the instant that I preach.’ Nevertheless… for a little while longer at least I’m a preacher man and I have one more sermon to preach. Famous last words. And so once more, I become my own enemy and run the gauntlet of stricter judgement. ”

Following the Eucharist, the ‘Glory to God’ prayer, the Closing Hymn, “The Trumpets Sound, the Angels Sing”, Director of Music, Tom Arntzen launched into the opening bars of The Beatles’ “All You Need is Love” and the retiring rector processed out to appreciative applause.

(The liturgy was livestreamed via the parish's YouTube channel and is linked with this post. The sermon begins at the 23 minute mark.)

Following worship there was a farewell party, with music provided by a jazz trio led by Tom Arntzen, a Salmon barbecue, speeches and gifts. The event was skillfully and beautifully organized and presented by the parish. And, there was a special guest speaker, the rector of the parish from 1980-1989, the Right Reverend Michael Ingham, the 8th Bishop of the Diocese of New Westminster.

Gifts given to the departing rector included a framed copy of the music and lyrics of a song, especially composed and sung by Music Director, Tom Arntzen; a hotel voucher to spend a few days in Tofino; a purse (cheque) and a photo memory book. For those parishioners who were unable to write memories and/or good wishes for Angus prior to September 12, the book will remain in the church office on Sunday mornings until September 30.

Here is a link to the song written and performed by Tom Arntzen, "All the People Say Thank You!"

Reverend Stuart officially retires from this ministry on October 1, 2021.

(Bishop John Stephens was unable to attend this celebration, however he sent a letter to the people of the parish.  It is linked here)