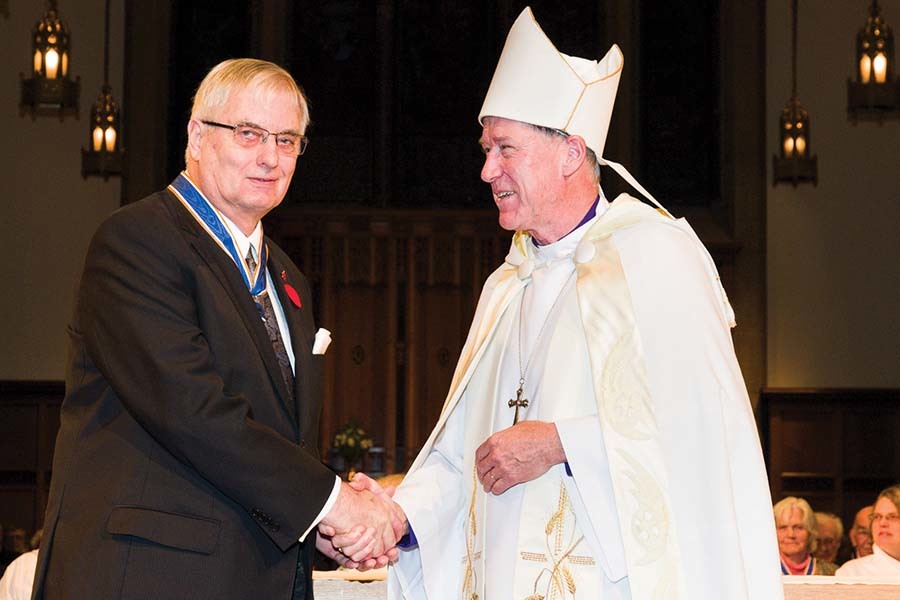 Bob Jones, ODNW died peacefully at the Richmond General Hospital with his loving wife Pauline by his side.

Bob and Pauline celebrated their 60th wedding anniversary in August 2017, surrounded by family and friends.

Their 60 plus years together started in Moose Jaw where they met in 1955, both working at SaskTel. They moved to Swift Current, SK in 1957, where their three children were born; then to Estevan, SK in 1967, where they finished raising their family. Bob and Pauline retired in Richmond in 1996.

Bob was very community minded and volunteered over his entire life. Coaching youngsters in both hockey and baseball; volunteering with the Jaycees, Kinsmen and Rotary organizations over a 60 plus year period; the Richmond Food Bank and St. Alban's Anglican Church. Bob always had a hug and a smile for everyone in his life.

He was invested into the Order of the Diocese of New Westminster, November 2013 and congratulated at the Investiture Eucharist by the Most Reverend Fred Hiltz, Primate of the Anglican Church of Canada.

He will be lovingly remembered by his wife Pauline Jones of Richmond, BC; daughters Debbie (Shinji) Jones-Akiyama of Port Moody, BC and Roberta (Gordon) Jones of Komatsu, Japan; son Dean (Jackie) Jones of Balgonie, SK; grandchildren Jade (Jason) Jones-Bender of Regina, SK; Sarah (Bryan) Cook of Regina, SK; great-grandchildren Cydnee, Nico and Stella; siblings Bill (Jackie) Jones of Vancouver, BC; Pat Ikkers of Ottawa, ON; Bev Bartlett of Rockford, IL and Linda Zillwood of Chilliwack, BC.

and what does the Lord require of you

but to do justice, and to love kindness,

and to walk humbly with your God.