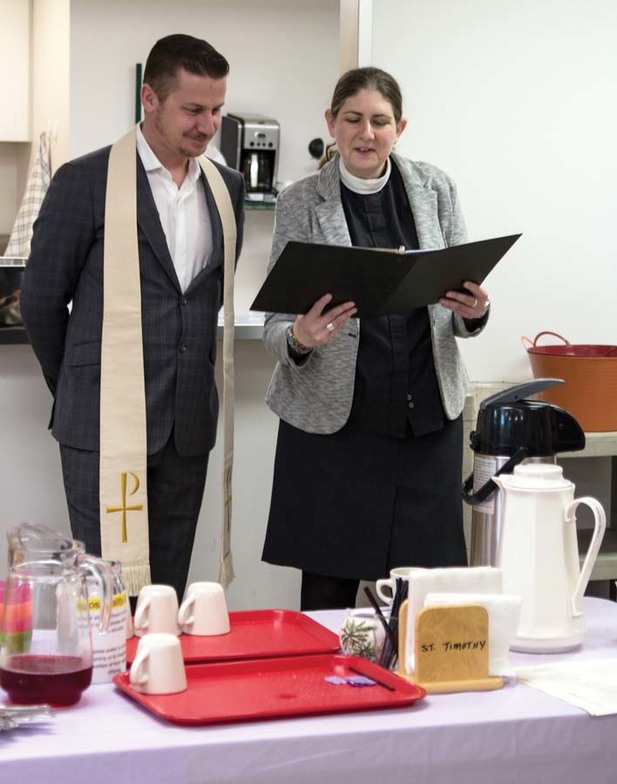 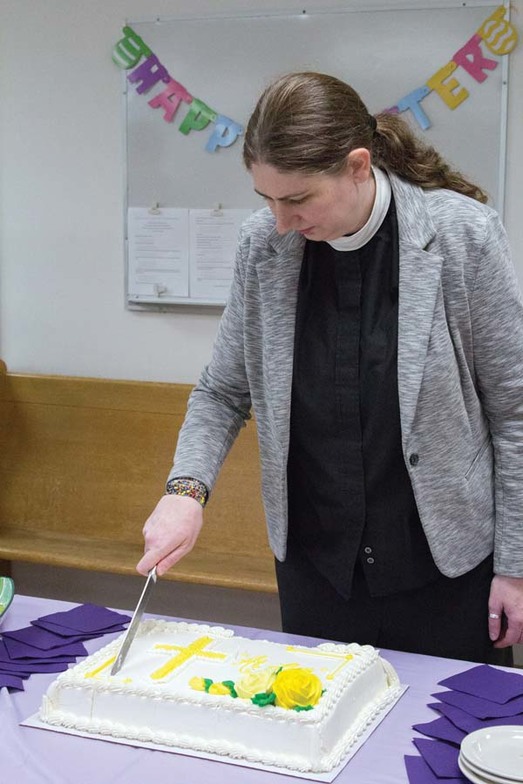 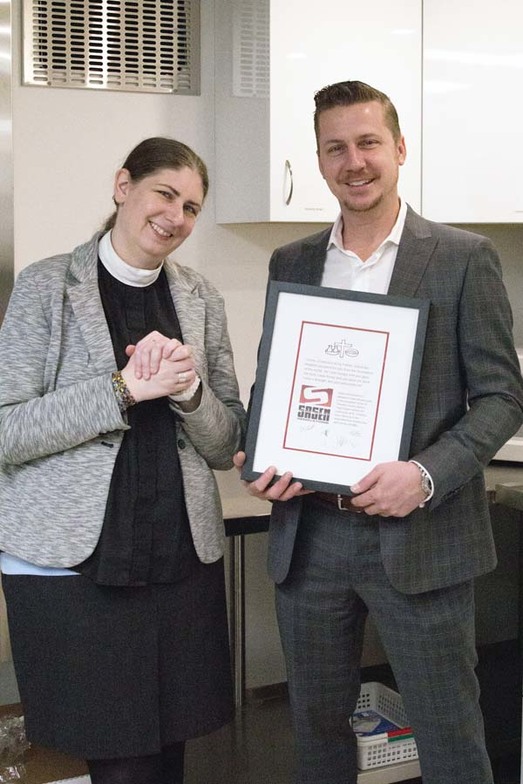 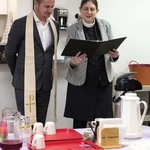 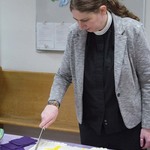 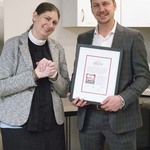 Investing in A Food Ministry at St. Timothy, Burnaby

The Parish of St. Timothy opened its new kitchen at a blessing and ribbon-cutting ceremony on April 23, 2017 after the main morning service. The Rev. Ruth Monette, interim priest-in-charge, and the Rev. Matthew Senf, Lutheran pastor and principal contractor, officiated at the blessing. We invited the contractors and those who use the facility to join us for the ceremony.

It had become clear some time ago that our old kitchen was not meeting our needs. The City of Burnaby had licensed it for out-of-school care snack service, and it had never had a health inspection. Floor space, counter space, electrical outlets, burners and oven, refrigeration – all were inadequate for anything beyond coffee service. We could serve food to our own congregation, but we could not invite the wider public in to share a meal.

Renovations are not for the faint of heart, as anyone who has lived through one will tell you. Understanding that the Diocese of New Westminster strongly supports our presence in North Burnaby, we undertook a campaign to demonstrate that we had a real need to invest in a kitchen renovation, both for ourselves and for others. Despite our intentions to accept the fiscal realities of this endeavour, the diocese’s estimate of the renovation costs was overly conservative, and the reality proved a lot more expensive. A new church kitchen is not just a new kitchen, it is a new commercial-grade kitchen. After much discussion and prayer the fundraising began.

Donations and bequests exceeded our expectations and may even have kept pace with costs. We would never have begun this project had we not had unrestricted access to our Memorial Fund, into which we deposit all the bequests we receive. By convention, we do not use this fund for operating expenses. We could not have continued to the extent the job required without generous ongoing donations and several further bequests.

Another parish recommended the architect it had used for its kitchen renovation and backed its recommendation with a $10,000 donation that funded his fees. Several contractors viewed the site, but none wanted the job. We persuaded the architect to meet with Matthew Senf, our tried and true general contractor, and our plumber and electrician, knowing the quality of work we could expect from them and their respective crews.

Originally, we scheduled the renovation for three months in 2015, starting at the end of June as soon as our out-of-school daycare was on the summer hiatus. We had to postpone this plan for a year, however, when the City of Burnaby did not issue our building permits until mid-August. We did not waste this time: we raised more funds, assessed hazardous materials, and began negotiations with community groups.

Minor delays have been cumulative; major delays devastating at times. Throughout the renovation, each phase required inspection, sometimes holding up the next phase for days. It has been a busy time for Burnaby building inspectors and for trades. Metro Vancouver changed a bylaw that overruled the Burnaby permit for the grease extractor, a major supplier was sure that he knew best, and a crew who had not referred to the four pages of detailed drawings initially installed the huge range hood in the wrong place, and then had to move it. Our treasurer often put pen to cheque in faith that the unanticipated expenditures were necessary.

We also made compromises along the way: we gave up the second oven due to electrical capacity, and the pass-through dishwasher due to both electrical capacity and water volume. Everyone with kitchen access has received an orientation to the new kitchen, including the assigned maintenance chores. Commercial-grade equipment comes with commercial-grade cleaning, calibrating, and keeping of maintenance logs. Our new facility provides adequate cooler and counter space for multiple trays and boxes of catered food. There is designated space for food preparation and for clearing dishes, and a dishwasher with enough hot water supply to go the distance.

Our legacy is safety: a non-slip floor, a stove that will not turn on without the accompanying exhaust system, a fire suppression system connected to our alarm system, an accessible pull station for a fire alarm, “in” and “out” doors, and food preparation and clean-up areas widely separated.

Our out-of-school care operator had been through renovations before. She knew how to sell the temporary accommodations to her licensing officer and her clients. She also knew the limits of this arrangement and made sure the contractor hoarded off the work area in a timely manner so that the children could move back downstairs. The contractor’s posted site rules elicited many favorable comments from parents and visitors alike. Our community groups were very tolerant of the upheavals and stuck with us.

The Greater Vancouver Food Bank, North Burnaby depot, returned to St. Timothy on March 2, 2017. We have opened conversations with the Food Bank about community outreach possibilities that the kitchen now opens for us.

Our new kitchen is now our legacy to future worshipers and community groups. Built and equipped to the most stringent codes of our time, it stands ready for safe food service to our congregation, to our community groups, and for food ministry to the neighbourhood. How soon can we be ready for our first community outreach event? We sold this renovation to Fraser Health and to our community as necessary to our mission to the disadvantaged and to our outreach to the community. Now is the time to move forward.

We extend special thanks to the Rev. Stephanie Shepard, who began her time with this congregation during the 2003 renovation of our Church building and ended it during the construction of our Legacy Kitchen.

(This is an edit of the article that will be published in its entirety in the September 2017 issue of Topic the magazine of the Diocese of New Westminster distributed as a section of the national publication, The Anglican Journal)